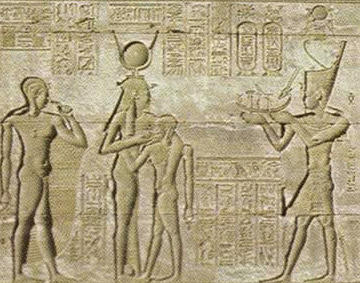 "Hathor….. is an Ancient Egyptian goddess who personified the principles of joy, feminine love, and motherhood…. she was a goddess of music, dance, foreign lands and fertility who helped women in childbirth….The cult of Hathor predates the historic period, and the roots of devotion to her are therefore difficult to trace, though it may be a development of predynastic cults which venerated fertility, and nature in general, represented by cows….Hathor is commonly depicted as a cow goddess with head horns in which is set a sun disk with Uraeus. Twin feathers are also sometimes shown in later periods as well as a menat necklace. Hathor may be the cow goddess who is depicted from an early date on the Narmer Palette and on a stone urn dating from the 1st dynasty that suggests a role as sky-goddess and a relationship to Horus who, as a sun god, is "housed" in her……The Ancient Egyptians viewed reality as multi-layered in which deities who merge for various reasons, while retaining divergent attributes and myths, were not seen as contradictory but complementary. In a complicated relationship Hathor is at times the mother, daughter and wife of Ra and, like Isis, is at times described as the mother of Horus, and associated with Bast….. by early Roman times females became identified with Hathor and men with Osiris.The Ancient Greeks identified Hathor with the goddess Aphrodite and the Romans as Venus."…..http://en.wikipedia.org/wiki/Hathor 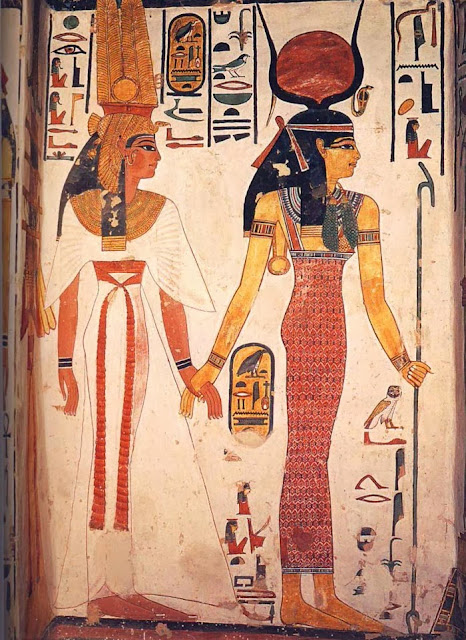 HET HERU …..Hathor (Het-Heru - "the house of Horus") ….With Het Heru, the emphasis is not on the hot gonadal expression of Heru, but on the cool, peaceful, joyous, refined charming, sexual arousal and seductive behavior that stimulates the production of estrogen and the female reproductive system….the sexual arousal is an expression of the arousal of the life force – Ra…… she is also the "Eye (utchat) of Heru". That is, the eye of the will, or simply, our ability to visualize what we want to achieve. When the Kamitic texts say that the deities whose bodies are composed of light nourish themselves on the celestial light supplied to them by the Eye of Heru, they are referring to the subtle luminous matter out of which our images are formed….In earlier Egyptian mythology, Hathor was portrayed as a cow with a stylized sun between her horns, a woman wearing a headdress with a solar disk and horns or a woman with the ears of a cow. She sometimes also wore a uraeus. One of the myths of Hathor sees her as the wandering eye of Amun or Ra, which he replaced."….http://www.lashtal.com/wiki/Hathor

Hathor's cult center was at Dendera, Egypt….The Dendera Temple complex, which contains the Temple of Hathor, is one of the best-preserved temples, if not the best-preserved one, in all of Egypt……The temple of Hathor was constructed over a period, we believe, of thirty-four years, between 54 and 20 BC. When Ptolemy XII died in 51 BC, the temple was, after four years of building activity, still in its early stages, although it did contain some underground crypts. It seems that the remainder of the temple was build during the twenty-one year reign of his successor, Queen Cleopatra VII. At the time of her death in 30 BC, the decoration work had just begun (on the outer rear wall)……http://www.touregypt.net/featurestories/dendera.htm 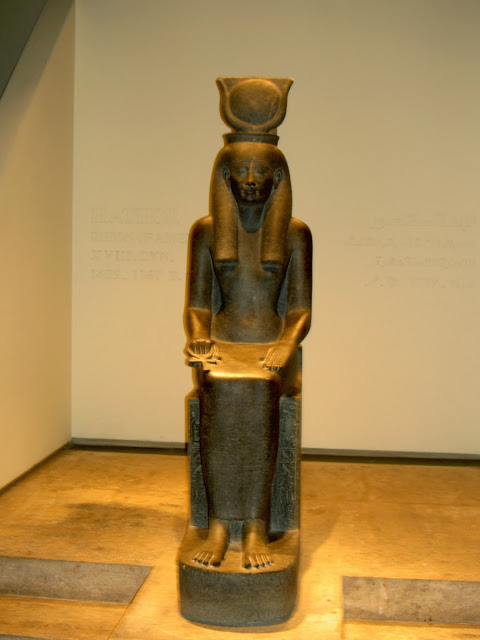 "Hathor was originally a personification of the Milky Way, which was considered to be the milk that flowed from the udders of a heavenly cow (linking her with Nut, Bat and Mehet-Weret). As time passed she absorbed the attributes of many other goddesses but also became more closely associated with Isis, who to some degree usurped her position as the most popular and powerful goddess. ….She was a sky goddess, known as "Lady of Stars" and "Sovereign of Stars" and linked to Sirius (and so the goddesses Sopdet and Isis). Her birthday was celebrated on the day that Sirius first rose in the sky (heralding the coming innundation). By the Ptolemaic period, she was known as the goddess of Hethara, the third month of the Egyptian calendar."…..http://ancientegyptonline.co.uk/hathor.html 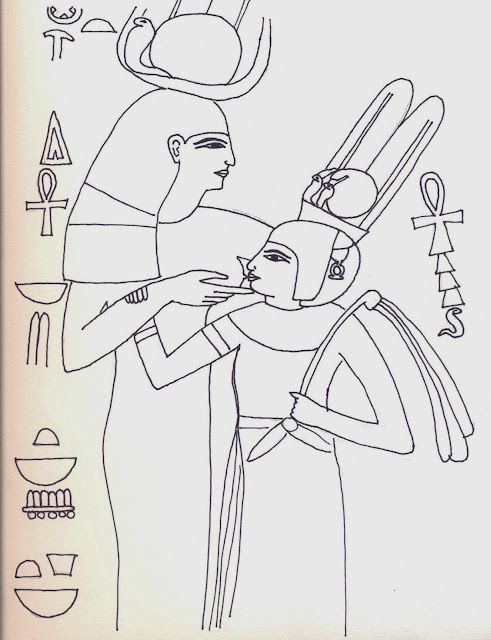 "The image of Hathor the Divine Cow suckling the pharaoh was quite common in ancient Egyptian art—however, it was not confined to Egypt. Similar motifs have been found on a wide variety of objects throughout the ancient Near East—in Crete, Syria, Mesopotamia, Greece, and on Phoenician objects as well. This image was thought to express the joyous tenderness, warmth, and contentment that sustains the flow of life. The Egyptian hieroglyphs for “to be joyful” was represented by a cow turning round to a young calf nestling at her side."….http://thelemapedia.org/index.php/Hathor

"Hathor was the goddess of joy, motherhood, and love. As the goddess of music and dancing her symbol was the sistrum. As a fertility goddess and a goddess of moisture, Hathor was associated with the inundation of the Nile. In this aspect she was associated with the Dog-star Sothis whose rising above the horizon heralded the annual flooding of the Nile. In the legend of Ra and Hathor she is called the "Eye of Ra."…….http://www.egyptartsite.com/hathor.html

"Sacred prostitution, temple prostitution, or religious prostitution is a sexual ritual consisting of sexual intercourse or other sexual activity performed in the context of religious worship, perhaps as a form of fertility rite and Hieros gamos. The practice of sacred prostitution is well disputed among scholars, partly due to doubts cast on the histories of Herodotus….."In the Ancient Near East along the Tigris and Euphrates rivers there were many shrines and temples or "houses of heaven" dedicated to various deities. According to the Ancient Greek historian and story-teller Herodotus, as he wrote in The Histories, the ancient Mesopotamians practiced temple prostitution…"…Herodotus, The Histories 1.199, tr A.D. Godley (1920)