"In Mingjiao Buddhism …… “Mingjiao” means the Religion of Light and that it has existed in the world from the dawn of mankind in one form or another…..In Persia, the Religion of Light was presented by the Divine Messengers: Zoroaster and Mani, but a very important manifestation that few people outside of Tibet know of was Tonpa Shenrab Miwoche……Tonpa Shenrab was actually from Central Asia, part of the Persian Empire in a time after the life of Zoroaster….. The Buddha Mani would later also present the Religion of Light in the 2nd century A.D….. Tonpa Shenrab came awakened to his true nature as a manifestation of the Divine Messenger, known by many names: In Tibet He was known as Shenlha Okar (Priest King of the Shen Clan, the clan of Tonpa Shenrab), in India this would be Vishnu or the Adi Purusha and in many countries in the Far East He would be known as Amitabha….. He was called to the Tibetan plateau and taught the Pure Teaching for 3 years this would become the basis of Yundrung Bon, the Eternal Light Teachings….Tonpa Shenrab is considered to be a Buddha who existed prior to the time of Shakyamuni."…..http://liberationoflight.wordpress.com/2011/10/28/tonpa-shenrab-miwoche-a-divine-messenger-of-the-religion-of-light/ 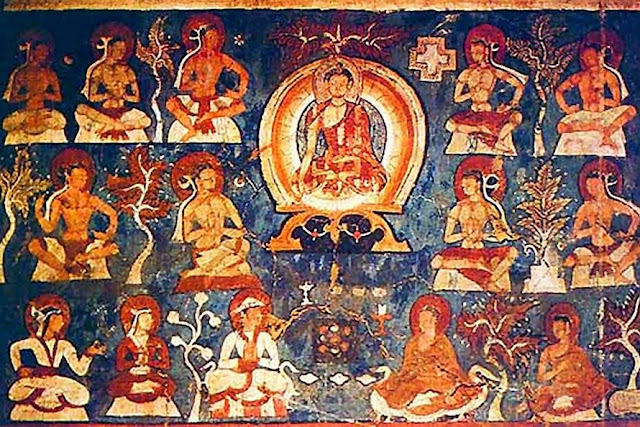 "….Biruni’s (973-1048) statement that in the East “most of” Tibet adhered to Mani’s law and doctrine and his assertion that Mani himself went to Tibet (Biruni, Ātār, pp. 191-92)...Al-Biruni, a Persian scholar and writer in service to the Ghaznavid court, reported that, at the turn of the 2nd millennium, the Buddhist monasteries in Bactria, including Navbahar, were still functioning and decorated with Buddha frescoes. A curious notice of this building is found in the writings of Arabian geographer Ibn Hawqal, an Arabian traveler of the 10th century.

"Manichaeism flourished for a time in the land of its birth (Persia) and even further east in Northern India, Western China, and Tibet. While it had long been thought that Manichaeism arrived in China only at the end of the seventh century, a recent archaeological discovery demonstrated that it was already known there in the second half of the sixth century…..Sodgians in Central Asia believed in the religion. Uyghur ruler Khagan Boku Tekin (AD 759–780) converted to the religion in 763 ….the Babylonia headquarter sent high rank clerics to Uyghur, and Manichaeism remained the state religion for about a century before the collapse of the Uyghur empire in 840. In the east it spread along trade routes as far as Chang'an, the capital of the Tang Dynasty in China. ….In the Song and Yuan dynasties of China remnants of Manichaeanism continued to leave a legacy contributing to sects such as the Red Turbans."….La Vaissière, Etienne de, "Mani en Chine au VIe siècle." Journal Asiatique, 293–1, 2005, p. 357–378.

"Abū al-Rayhān Muhammad ibn Ahmad al-Bīrūnī (born 973 in Kath, Khwarezm, died 1048 in Ghazni) known as Alberonius in Latin and Al-Biruni in English, was a Persian-Khwarezmian Muslim scholar and polymath from the Khwarezm region…..Al-Biruni is regarded as one of the greatest scholars of the medieval Islamic era and was well versed in physics, mathematics, astronomy, and natural sciences, and also distinguished himself as a historian, chronologist and linguist. He spent a large part of his life in Ghazni in modern-day Afghanistan, capital of the Ghaznavid dynasty which ruled eastern Iranian lands and the northwestern Indian subcontinent. In 1017 he traveled to the Indian subcontinent and became the most important interpreter of Indian science to the Islamic world. He is given the titles the "founder of Indology" and the "first anthropologist". He was an impartial writer on custom and creeds of various nations, and was given the title al-Ustadh ("The Master") for his remarkable description of early 11th-century India."….http://en.wikipedia.org/wiki/Abū_Rayḥān_al-Bīrūnī 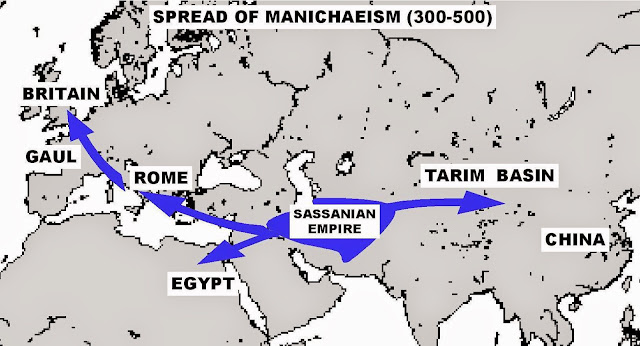 "Manichean faith as pertains to Tibet ….In keeping with the first of his Ten Points, one of the first things Mani did was to concern himself with missions. Not only did he send out missions, both east and west, as soon as possible, but he himself also traveled extensively. From various sources we know that before he approached the rulers of the Sasanian empire he traveled to various countries east of the empire. Other sources add that he went to Tibet and China preaching his religion before returning to Iran, where he was seized and killed under Wahram I. "…http://answers.yahoo.com/question/index?qid=20111016191302AA3kvTs

"….The eighth century saw the glorious rise of Padmasambhava and Yeshay Tzogyal in the land of Tibet where they vilified the Manichaean and Buddhist mixture that came to be known as Vajrayana, the third and highest vehicle of Buddhism. More outward and traditional forms of Manichaeanism no longer prevailed. The Mani wheel is another name for a prayer wheel used for prayers in Tibetan Buddhism. ….In 757 AD, Manichaeanism was still the strongest religion and was the state religion of the Uighur Kingdom which by 757 stretched from northern Tibet all the way to the Yellow River in China. In 762 AD, This Manichaean faith became totally dominant in northern Tibet when the Uighur King converted to Manichaeanism in 762 AD. "…..http://www.iranicaonline.org/articles/manicheism-iv-missionary-activity-and-technique-

"Manichean faith in Tibet ……670-692 Manichaeanism existed in eastern Turkestan where the Uighur Turks were intermixing with Iranians and Scyths. Manichaeanism, along with Buddhism, became extremely prevalent in this area. This Buddhist Manichaeanism mix had a profound influence of Mahayana Buddhism which would soon become the dominant form of Buddhism. Manichaean elements are especially discernable in Buddhist schools such as the pure land sect and continued to influence the unique development of Vajrayana Buddhism in Tibet. Thus these forms of Buddhism speak of a central deity, a light land, 5 elements in need of redemption, and other traditional Manichaean teachings."…..https://docs.google.com/harvard.edu/~iranian/Manicheism/Manicheism_I_Intro.

" …..the Chinese chronicle Song she maintains the existence of Manicheans in the kingdom of Khotan for the year 961…. The occasional mention of Mar Ma-ne, that is, Mār Mānī, in some Tibetan inscriptions and in a manuscript is no proof to the contrary (Stein, 1980, pp. 329-37). The Manichean character of wall paintings at Alchi (West Tibet) as presenting the “Cross of Light” (Klimkeit, 1979, pp. 357-99) is not impossible but is hard to prove. The same applies to Hummel’s observations on Manichean motifs in the ancient Bon religion (Hummel, 1990, pp. 21-32).."….http://www.iranicaonline.org/articles/manicheism-iv-missionary-activity-and-technique-

"..Manichaeism originated in Babylon and was expressed in Syriac and Persian terms. The religion quickly spread to other lands suchas India, China, Tibet and even into the Western hemisphere. Inthe West adherents were severely persecuted and murdered by Christians leaders and members of the Catholic church.... In the East, where Manichaeism became strongest, it was known by different names ...Mingjiao (ming jiao), Monijiao (mo-ni jiao),Daiun komyo ji (a name for Monijiao temples and religious educational institutions in 768)…… In the Monijiao tradition, Mani(Moni) is viewed as an emanation of Laotzu"….http://www.academia.edu/1963810/Monijiao_Manichaeism_in_China

"Manichaeism, a new religion which posited an eternal struggle between good and evil, had dramatically expanded across the ancient world. Less than half-a-century after its rise, though, the faith had been all but annihilated. Bahram II massacred its followers in Persia; in 296, the Roman emperor, Diocletian, decreed its leaders “condemned to the fire with their abominable scriptures.” Khagan Boku Tekin, the Uighur king, made Manichaeism the state religion giving it a home — but even this last redoubt collapsed in 840."….http://www.thehindu.com/todays-paper/tp-opinion/salman-rushdie-indias-new-theocracy/article2818871.ece