"Kaula practices are based on tantra, closely related to the siddha tradition and shaktism. Kaula sects are noted for their extreme exponents who recommend the flouting of taboos and social mores as a means of liberation. Such practices were often later toned down to appeal to ordinary householders, as in Kaśmiri Śaivism…..Kaula or Kula describes a type of Hindu tantrism reckoned by Gavin Flood to derive from Kapalika or "cremation ground" asceticism"….Flood, Gavin D. (1996), An Introduction to Hinduism, Cambridge: Cambridge University Press

"The Kapalika religion is itself believed to have originated from a very strange brahmacidal penance prescribed in the ancient Dharma sutras. According to the English scholar Robert Mayer (1990), the Kapalika observance came to be adopted as the principal ascetic practice of the earliest Tantric sect, the Lakulas. It subsequently came to pervade all tantric Saiva and Bauddha sects, and to varying degrees, nearly all forms of Asiatic asceticism."....Ashé Journal, Vol 5, Issue 3...The Savage Buddha: Notes on Gautama & the Kapalika-vrata by Sritantra 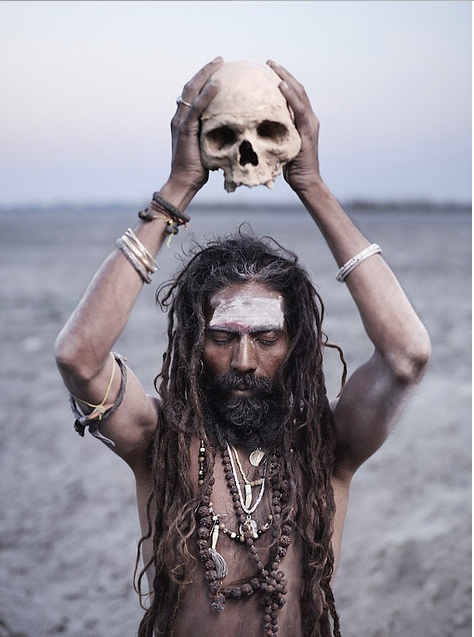 "Similarly to other tantric schools, Kaula chooses a positive (affirmative) approach: instead of prescribing self-limitations and condemning various actions, it embraces such actions in a spiritual light…..Thus, sexuality, love, social life and artistic pursuits are considered vectors of spiritual evolution. The main focus in Kaula is on practical methods for attaining enlightenment, rather than engaging in complex philosophical debate….The first phase of development is linked to the attainment of a state of non-duality described as an "absorption into the spiritual heart", nirvikalpa samadhi or experiencing the "uncreated light" of consciousness (prakāśa)…..In Buddhist philosophy, the technical term nirvikalpa-jñāna is translated by Edward Conze as "undifferentiated cognition."….Muller-Ortega, Paul (1989), The Triadic Heart of Siva, Albany: State University of New York Press….Conze, Edward (1962), Buddhist Thought In India (First Ann Arbor Edition, The University of Michigan Press 1967 ed.), George Allen & Unwin Ltd.,

"Guru is the path" (gurur upāyaḥ). This statement from the most revered sacred text of Kashmir Shaivism, the Śiva Sutras, summarizes the school's conception of the guru-disciple relationship. Kaula functions as a form of guru yoga, where the disciple's only essential practice is to surrender himself to his guru, accepting the spiritual impulse bestowed upon him by his master."….Shiva Sutras are a collection of seventy seven aphorisms that form the foundation of the tradition of spiritual mysticism known as Kashmir Shaivism. They are attributed to the sage Vasugupta of the 9th century C.E….. the Shiva Sutras and the ensuing school of Kashmir Shaivism are a Tantric or Agamic tradition.....http://en.wikipedia.org/wiki/Shiva_Sutras_of_Vasugupta

Abhinavagupta, 975 - 1025…. (Sanskrit: अभिनवगुप्त)…..one of Kashmir's greatest philosophers, mystics and aestheticians. He was also considered an important musician, poet, dramatist, exegete, theologian, and logician — a polymathic personality who exercised strong influences on Indian culture. Abhinavagupta was strongly influenced by Buddhist logic…..He was born in the Valley of Kashmir in a family of scholars and mystics and studied all the schools of philosophy and art of his time under the guidance of as many as fifteen (or more) teachers and gurus. In his long life he completed over 35 works, the largest and most famous of which is Tantrāloka, an encyclopedic treatise on all the philosophical and practical aspects of Trika and Kaula (known today as Kashmir Shaivism)."….http://en.wikipedia.org/wiki/Abhinavagupta

"The Heart…….Aham, the heart or "subjective I", is a central concept in Kaula ideology, conceived of as the most sacred reality, home of consciousness (Cit) and bliss (Ananda), place of union of the cosmic couple Shiva and Shakti…… the heart is the binding force of all conscious experiences…. The concept of "Spiritual Heart" is so important that even the supreme realization in Kashmir Shaivism is described in relation to it. The so-called Kechari Mudra is an attitude described as "the ability of consciousness to freely move (charati) about in the space (kha) of the heart"….. ("kha"+"charati" forming "kechari")…..

"Khecarī mudrā… (Sanskrit, खेचरी मुद्रा) is a yoga practice which is carried out by placing the tongue above the soft palate and into the nasal cavity. In the beginning stages and applicable for most practitioners, the tip of the tongue touches the soft palate as far back as possible without straining or placed in contact with the uvula at the back of the mouth.[4] Variant spellings include Khechari Mudra, Kecharimudra, and Kechari Mudra. Mudrā (Sanskrit, मुद्रा, literally "seal"), when used in yoga, is a position that is designed to awaken spiritual energies in the body.[….The Pali canon contains three passages in which the Buddha describes pressing the tongue against the palate for the purposes of controlling hunger or the mind, depending on the passage. However there is no mention of the tongue being inserted into the nasopharynx as in true kechari mudra…..A hathayoga text, the Khecarīvidyā, states that kechari mudra enables one to raise Kundalini and access various stores of amrita in the head, which subsequently flood the body. Siva, in the same text, gives instructions on how to cut the lingual frenulum as a necessary prerequisite for the kechari mudra practice…..A tantric Saiva text, the Mālinīvijayottaratantra, warns: [If] his mouth fills with a slightly salty liquid that smells of iron then he should not drink it but spit it out. He should practice thus until [the liquid] becomes sweet-tasting."…..http://en.wikipedia.org/wiki/Khecarī_mudrā

"The sexual practices of the Kaula schools, also known as "the secret ritual", are performed with a so-called "external Shakti" (sexual partner) as opposed to the purely meditative practices which involve only one's own spiritual energies (the "interior Shakti"). The role of the sexual Kaula ritual is to unite the couple, yogini (initiated woman) and siddha (initiated man), and induce one in the other a state of permanent awakening…..The Kaula sacrifice is reserved for the few, the elites, who can maintain a state of Bhairava (spiritual illumination) while being engaged in the sexual union. Other couples, even if they reproduce the ritual to the letter (as perceived from outside), if they do not attain the Bhairava consciousness, are merely making love."….http://en.wikipedia.org/wiki/Kaula

"Shaktipat or Śaktipāta (Sanskrit, from shakti - "(psychic) energy" - and pāta, "to fall")….. the conferring of spiritual "energy" upon one person by another. Shaktipat can be transmitted with a sacred word or mantra, or by a look, thought or touch……Saktipat is considered an act of grace (anugraha) on the part of the guru or the divine. Its reception cannot be forced though the recipient must be open to such an influx since it also cannot be imposed by force….. Shaktipat can be transmitted in person or at a distance, through an object such as a flower or fruit or else by telephone or letter…… 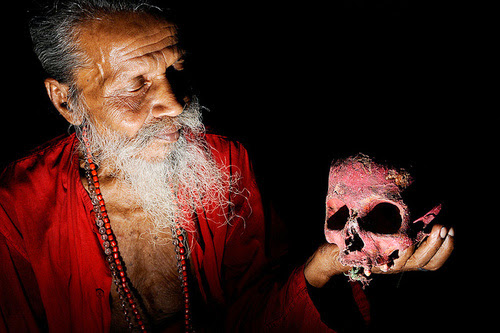 "A charnel ground (Devanagari: श्माशान; Romanized Sanskrit: śmāśāna; Tibetan pronunciation: durtrö; Tibetan: དུར་ཁྲོད, Wylie: dur khrod), is an above-ground site for the putrefaction of bodies, generally human, where formerly living tissue is left to decompose uncovered. Although it may have demarcated locations within it functionally identified as burial grounds, cemeteries and crematoria, it is distinct from these as well as from crypts or burial vaults…..In a religious sense, it is also a very important location for sadhana and ritual activity for Indo-Tibetan traditions of Dharma particularly those traditions iterated by the Tantric view such as Kashmiri Shaivism, Kaula tradition, Esoteric Buddhism, Vajrayana, Mantrayana, Dzogchen, and the sadhana of Chöd, Phowa and Zhitro, etc. The charnel ground is also an archetypal liminality that figures prominently in the literature and liturgy and as an artistic motif in Dharmic Traditions and cultures iterated by the more antinomian and esoteric aspects of traditional Indian culture."…..http://en.wikipedia.org/wiki/Charnel_ground

"While Kaula is primarily an oral tradition and does not place a high value on the creation of texts, there are some texts associated with the tradition. Muller-Ortega, following Pandey, summarizes the literature of the Kashmiri school at:…..Muller-Ortega, Paul (1989), The Triadic Heart of Siva, Albany: State University of New York Press, ISBN 0-88706-787-5.

"Abhinavagupta received Kaula initiation through Śambhunātha's wife (acting as a dūtī or conduit). The energy of this initiation is transmitted and sublimated into the heart and finally into consciousness. Such a method is difficult but very rapid and is reserved for those who shed their mental limitations and are pure."…..http://en.wikipedia.org/wiki/Abhinavagupta

"The Kāpālika tradition was a non-Puranic, tantric form of Shaivism in India, whose members wrote the Bhairava Tantras, including the subdivision called the Kaula Tantras. These groups are generally known as Kāpālikas, the "skull-men," so called because, like the Lākula Pāsupata, they carried a skull-topped staff (khatvanga) and cranium begging bowl. Unlike the respectable Brahmin householder of the Shaiva Siddhanta, the Kāpālika ascetic imitated his ferocious deity, and covered himself in the ashes from the cremation ground, and propitated his gods with the impure substances of blood, meat, alcohol, and sexual fluids from intercourse unconstrained by caste restrictions. The Kāpālikas thus flaunted impurity rules and went against Vedic injunctions. The aim was power through evoking deities, especially goddesses…..The kapalikas may also have been related to the Kalamukhas ("black faces") of medieval South India."…..http://en.wikipedia.org/wiki/Kapalika

"Aham, a concept of Kashmir Shaivism, is defined as the supreme heart (hṛdayam), transcendent Self, supreme I awareness or infinite consciousness. The space of Aham is where kechari mudra (free movement in the space of the heart) is realised. Kechari mudra is considered the supreme state of spiritual evolution…..Another definition of Aham is that of primordial mantra, transcendental mantra, the so called heart-bīja (mantra of the heart) - force and power of consciousness. As the supreme mantra, Aham is closely related to matravīrya (the potency of mantra)……Aham is formed of A+HA+M, a triad of Śhiva (A), Śakti (HA) and bindu (M)…"….http://en.wikipedia.org/wiki/Aham_(Kashmir_Shaivism)..