A Rainbow Of Chaos 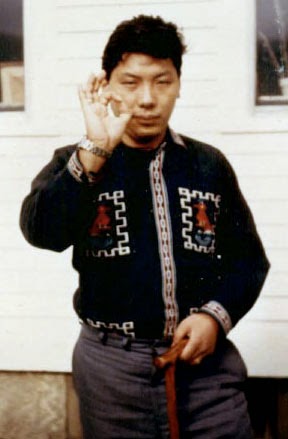 There is a vast store of energy which is not centered, which is not ego’s energy at all. It is this energy which is the centerless dance of phenomena, the universe interpenetrating and making love to itself. It has two characteristics: a fire quality of warmth and a tendency to flow in a particular pattern, in the same way in which fire contains a spark as well as the air which directs the spark. And this energy is always ongoing, whether or not it is seen through the confused filter of ego. It cannot be destroyed or interrupted at all. It is like the everburning sun. It consumes everything to the point where it allows no room for doubt or manipulation.

But when this heat is filtered through ego, it becomes stagnant, because we ignore the basic ground, refuse to see the vast space in which this energy occurs. Then the energy cannot flow freely in the open space shared with the object of passion. Instead it is solidified, narrowed, and directed by the central headquarters of ego to move outward in order to draw the object of passion into its territory. This captive energy extends out to its object and then returns to be programmed again. We extend our tentacles and try to fix our relationship. This attempt to cling to the situation makes the communication process superficial. We just touch another person’s surface and get stuck there, never experiencing their whole being. We are blinded by our clinging. The object of passion, instead of being bathed in the intense warmth of free passion, feels oppressed by the stifling heat of neurotic passion.

Under this fine rain I breathe in the innocence of the world. I feel coloured by the nuances of infinity. At this moment I am one with my picture. We are an iridescent chaos…

“I will astonish Paris with an apple......Fruit… like having their portrait painted. They seem to sit there and ask your forgiveness for fading. Their thought is given off with their perfumes. They come with all their scents, they speak of the fields they have left, the rain which has nourished them, the daybreaks they have seen.....It’s so fine and yet so terrible to stand in front of a blank canvas.

Genius is the ability to renew one’s emotions in daily experience.

For an Impressionist to paint from nature is not to paint the subject, but to realize sensation.

The painter unfolds that which has not been seen.

I could paint for a hundred years, a thousand years without stopping and I would still feel as though I knew nothing.

What I am trying to translate to you is more mysterious; it is entwined in the very roots of being, in the implacable source of sensations.

I am still searching for the expression of those confused sensations that we bring with us at birth.

I have to keep working, not to arrive at finish, which arouses the admiration of fools… I must seek completion only for the pleasure of being truer and more knowing....I am progressing very slowly, for nature reveals herself to me in very complex forms.......We live in a rainbow of chaos. 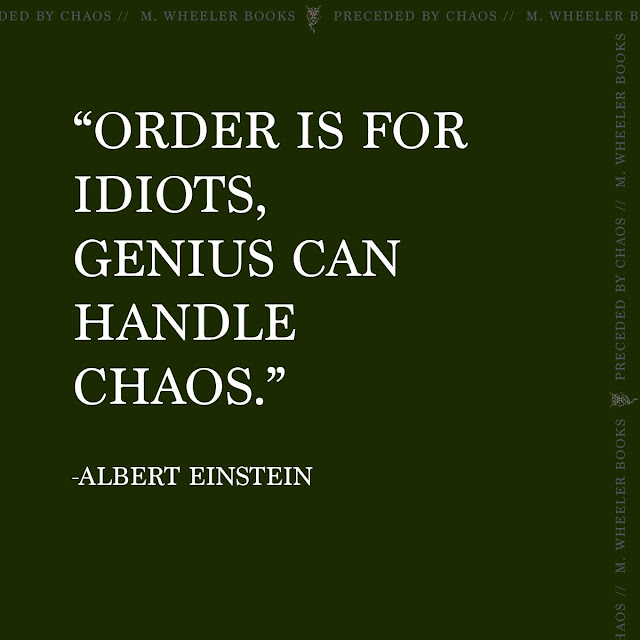 A human being is a part of the whole called by us universe, a part limited in time and space. He experiences himself, his thoughts and feeling as something separated from the rest, a kind of optical delusion of his consciousness. This delusion is a kind of prison for us, restricting us to our personal desires and to affection for a few persons nearest to us. Our task must be to free ourselves from this prison by widening our circle of compassion to embrace all living creatures and the whole of nature in its beauty.”

Human beings, vegetables, or cosmic dust, we all dance to a mysterious tune, intoned in the distance by an invisible piper.

When the poet Paul Valery once asked Albert Einstein if he kept a notebook to record his ideas, Einstein looked at him with mild but genuine surprise. "Oh, that's not necessary," he replied . "It's so seldom I have one.”

Look deep into nature, and then you will understand everything better.

Logic will get you from A to B. imagination will take you everywhere.

Reality is merely an illusion.

It’s not that I’m so smart, it’s just that I stay with the questions longer.

Energy is liberated matter, matter is energy waiting to happen. ....Everything is energy and that’s all there is to it.

.....space is no longer something distinct from matter, it is one of the "material" components of the world. An entity that undulates, flexes, curves, twists. We are not contained within an invisible, rigid infrastructure: we are immersed in a gigantic, flexible snail shell. The sun bends space around itself, and the Earth does not turn around it because of a mysterious force but because it is racing directly in a space which inclines, like a marble that rolls in a funnel. There are no mysterious forces generated at the centre of the funnel; it is the curved nature of the walls which causes the marble to roll......Planets circle around the sun, and things fall, because space curves.

Einstein predicted that time passes more quickly high up than below, nearer to the Earth...... If a man who has lived at sea level meets up with his twin who has lived in the mountains, he will find that his sibling is slightly older than him.

Einstein describes a colourful and amazing world where universes explode, space collapses into bottomless holes, time sags and slows near a planet, and the unbounded extensions of interstellar space ripple and sway like the surface of the sea 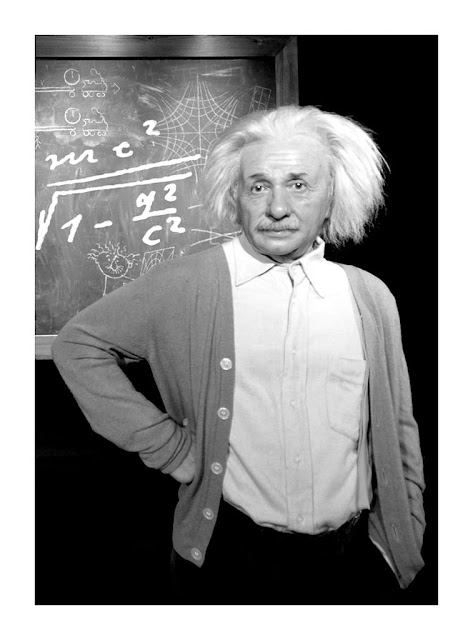 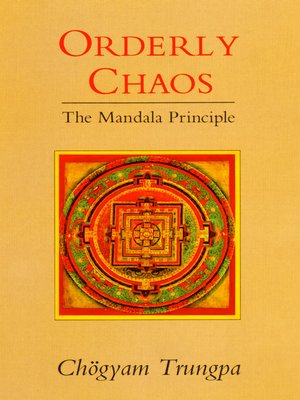 As Chögyam Trungpa explains, from the perspective of the mandala principle, existence is orderly chaos. There is chaos and confusion because everything happens by itself, without any external ordering principle. At the same time, whatever happens expresses order and intelligence, wakeful energy and precision. Through meditative practices associated with the mandala principle, the opposites of experience—confusion and enlightenment, chaos and order, pain and pleasure—are revealed as inseparable parts of a total vision of reality. 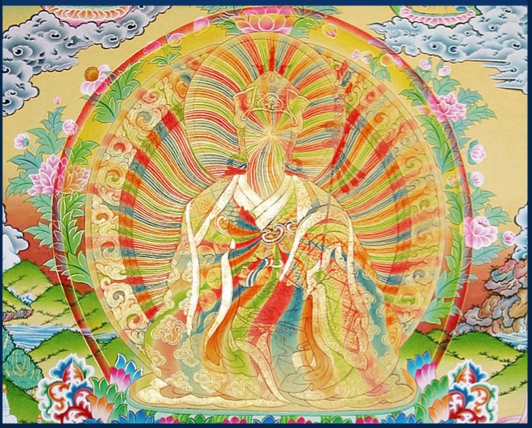 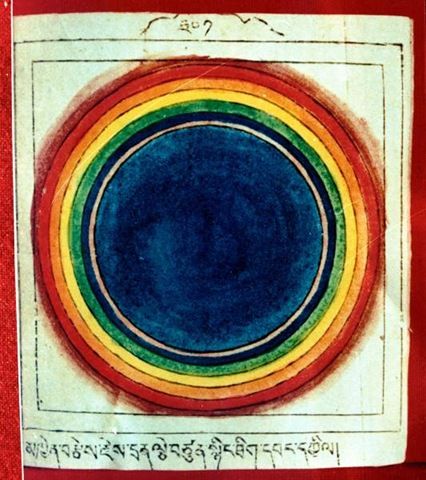 Chaos theory is a branch of mathematics focusing on the behavior of dynamical systems that are highly sensitive to initial conditions. "Chaos" is an interdisciplinary theory stating that within the apparent randomness of chaotic complex systems, there are underlying patterns, constant feedback loops, repetition, self-similarity, fractals, self-organization, and reliance on programming at the initial point known as sensitive dependence on initial conditions.

In classic Taoist cosmology, matter and energy are thought to be governed by five basic movements. The strength and influence of these movements wax and wane over the course of a year... all phenomena, such as our bodies and the distant stars, are constructed of the same basic particles of energy and that this energy is always in motion. Imagine everything as part of a vast, never-ending, always-changing grid or sea of energy. Tao is that energy and “all is Tao”.

This is where lalita, the dance, comes in. You dance with reality, dance with apparent phenomena. When you want something very badly you do not extend your eye and hand automatically; you just admire. Instead of impulsively making a move from your side, you allow a move from the other side, which is learning to dance with the situation. You do not have to create the whole situation; you just watch it, work with it, and learn to dance with it. So then it does not become your creation, but rather a mutual dance. No one is self-conscious, because it is a mutual experience.