RINPUNGPA: "The Scholar King". A Tibetan prince was the last of a dynasty of Ministers who ruled Tibet during the 15 and 16th centuries. He was considered one of the finest poets of the Tibetan language. Composed a guidebook to Shambhala in 1557 called "The Knowledge Bearing Messenger" as a letter to his dead father whom he believed to have been reborn in Shambhala. Complex and ornate style derived from the Sanskrit poetry of India. Piles subordinate clause on subordinate clause and makes abundant use of lavish epithets and terms even Tibetans have difficulty with.(Way to Shambhala pg 195)

Rinpungpa's Shambhala Guidebook......."Crossing Tibet westward.....to the sacred mountain of Kailas ....from Kailas continue northwest to Ladakh and down through mountains and forest to the vale of Kashmir...... then north, hrough a maze of treacherous mountains....you will pass safely through and come out in the land of the Paksik, horsemen who wear white turbans......over an 'outer ring' of sky-high ice mountains, down through a vicious desert, into unknown vistas....only to reach a second 'inner ring' of snow mountains. Beyond there, you must choose rightly among high valleys and low cities, having the good sense to know Shambhala when you reach it.........then you will at last, see the cities of Shambhala.....gleaming among ranges of snow mountains like stars on the waves of the Ocean of Milk." 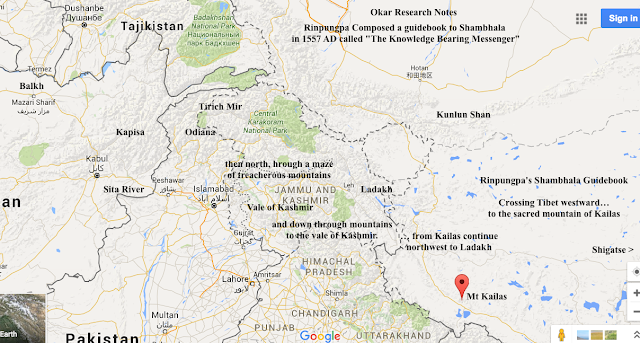 "But the most affecting of the guides was a desperate letter, called 'The Knowledge-Bearing Messenger', written in about 1560 by a Tibetan prince, Rinpungpa, who included instructions for the messenger carrying his letter to the secret land: 'Take this message and go to my father in Shambhala. May my words of truth, conquering the mountains of dualism, guide you along the way and help you to overcome the obstacles that lie before you.'.....According to Bernbaum, Rinpungpa warned of everything from starvation to forests of knives to rivers so cold they killed at first touch. Adding in the Panchen Lama's instructions, and those from the Mahabharata, it pretty much boiled down to the same thing. From the lowland Indian river valley where the Lord Buddha lived, crossing Tibet westward, via the sacred mountain of Kailas, then north, over an 'outer ring' of sky-high ice mountains, down through a vicious desert, into unknown vistas. All the while you must appease dozens of gods, accumulate merit and fend off monsters, suppress the demons of delusion and transcend mere existence, recite 99 million mantras and fly through the sky on a fire chariot, only to reach a second 'inner ring' of snow mountains. Beyond there, you must choose rightly among high valleys and low cities, having the good sense to know Shambhala when you reach it."...The Road to Shangri-La by Patrick Symmes

"Using the ancient texts, and Google Earth, I calculated this at 3,400 miles. Rinpungpa's letter would lead me through three countries, a dozen languages, past the world's highest mountains and down into the bottom of the lowest desert in Asia......We rolled west through Shigatse, along the last paved roads we would see until the Kunlun Shan, the range on Tibet's northern edge, almost a month later. Shigatse was the original source of Prince Rinpungpa's letter.......'Turn to the north and west and take the high plateau to the sacred mountain of Kailas… From Kailas continue northwest to Ladakh… wind north through a maze of treacherous mountains… come out in the land of the Paksik, horsemen who wear white turbans and quilted robes filled with cotton… a barren desert devoid of water will stretch away before you like the desolate paths of suffering that run through this world of illusion.'.....The Road to Shangri-La by Patrick Symmes

"We slept in a monastery of the Nyingma, or Ancient Ones, the original Buddhists of Tibet. Like the monk on the train, the abbot, a high re-incarnation, discouraged me from trying to reach Shambhala in a 4x4 Jeep........ Meditate more, he said, feeding me balls of yak butter mixed with tsampa, or barley flour, from his own fingertips." .....The Road to Shangri-La by Patrick Symmes .....http://www.telegraph.co.uk/culture/3669971/The-road-to-Shangri-La.html

"Rinpung Ngawang Jigdag.....The learned Tibetan prince Rinpungpa wrote 'The Knowledge-bearing Messenger' in 1557 AD as a letter to his dead father, whom he believed had been reborn in the earthly paradise of Shambhala....In this excerpt from the poem, he gives the yogi directions for reaching Shambhala....Take this message and go to my father in Shambhala....Go first to the shrine of my father in the palace of Rinpung.....then go toward Shigatse....after that you must travel across central Tibet....stop also in the mountains of Nepal, at the holy shrine of Muktinath.....then turn to the north and west and take the high plateau to the sacred mountain of Kailas.....from Kailas continue northwest to Ladakh and down through mountains and forest to the vale of Kashmir....now the journey becomes more difficult....follow narrow paths that wind north through a maze of treacherous mountains....you will pass safely through and come out in the land of the Paksik, horsemen who wear white turbans and quilted robes with cotton.....leave them behind and go north across the plains....after many days of travel you will enter a deep forest...on the far side of this gloomy passsage, you will come to a wild foaming river called the Sita.....on the far bank you will find yoursel in a tranquil park where elephants play beneath a mountain lush with grass.....(pages 351-352 missing).....now go on across the beautiful countries that lie ahead....your path runs through idyllic towns.....then you will come to the last great obstacle of the journey....a wall of mountains piled so high and deep with snow that not even eagles can fly over it.....after crossing the mountains, you will have to go through one last forest filled with snakes and wild animals....then you will at last, see the cities of Shambhala.....gleaming among ranges of snow mountains like stars on the waves of the Ocean of Milk."........The Book of Heaven: An Anthology of Writings from Ancient to Modern Times.......Page 349-354......By Carol Zaleski, Philip Zaleski

?........"the land of the Paksik, horsemen who wear white turbans and quilted robes with cotton."

Ladakh ("land of high passes") (Ladakhi: ལ་དྭགས la'dwags; Hindi: लद्दाख़; Urdu: لَدّاخ‎) is a region in the Indian Administered Jammu and Kashmir that currently extends from the Kuen Lun mountain range to the main Great Himalayas to the south, inhabited by people of Indo-Aryan and Tibetan descent....... It is one of the most sparsely populated regions in Jammu and Kashmir and its culture and history are closely related to that of Tibet.

"The Vale of Kashmir.....Kashmir Valley is a valley located between the Karakoram and the Pir Panjal Range in the Indian state of Jammu and Kashmir. It is around 135 km long and 32 km wide, formed by the Jhelum River....The Kashmir Valley, or more poetically the Vale of Kashmir, is a large valley in the Himalayan mountains and an administrative region of Jammu and Kashmir state in India."

" A Thai, he didn't believe in the stories, carefully curated over the centuries by Tibetan Buddhists, that Shambhala was a real place, a city that could be found. Shambhala, the monk told me, was a destination for an inner journey. I should meditate more, he suggested, and travel less.....The Buddhism scholar Robert Thurman looked at me with pity when I mentioned my quest during a chat at Tibet House, in New York. Gene Smith, who directs the city's Tibetan Buddhist Resource Center, laughed out loud when I told him my plan. "We got a guy here going to Shambhala!" he shouted...... I ran into Peter Matthiessen, the author of The Snow Leopard, which mentions Shambhala three times, speculating that the hidden kingdom may have been based on some real but forgotten city or culture, out beyond the Gobi. "One must go oneself," he wrote, "to know the truth......So I told him I was going. Matthiessen shook his head. "It's really more of an idea," he said......By consensus, I was on a fool's errand, headed to a place that couldn't be reached...The current Dalai Lama insists the kingdom is real.".......http://www.outsideonline.com/1886931/kingdom-lotus

"A letter called "The Knowledge-Bearing Messenger," written around 1560 by a Tibetan prince named Rinpungpa.......One cold winter day, I drew out a rare copy of the prince's letter from the closed stacks of the New York Public Library. The manuscript, written in medieval Tibetan, was printed on long, loose-leaf pages that mimicked the palm leaves used in ancient Buddhist books. I had brought a red-robed monk, a young Tibetan from Staten Island, to attempt a translation, and when I unwrapped the book in his presence, a crowd of hushed bibliophiles gathered to watch......Rinpungpa was surrounded by enemies, his world collapsing. Buddhism was no longer practiced in India, its land of birth, and Islam had conquered Afghanistan to the west and the Central Asian steppe to the north. Rinpungpa's own clan had ruled brutally, and the prince correctly surmised that his days were limited. Seeking help, he summoned a spirit messenger to reach the enlightened kingdom, where his own father would be waiting, reborn in paradise.....Take this message and go to my father in Shambhala."....The Kingdom of the Lotus.....by: Patrick Symmes ....2007

“For me, Shambhala, you see, turned out to be not a goal but an absence. Not the discovery of a place but the act of leaving the futureless place where I was. And in the process I arrived at Constantinople.”― Thomas Pynchon, Against the Day (2006).. Against the Day is the story of a quest.... Above and beneath it all is the search for an ancient place, a holy grail, known as Shambhala. There resides a secret of life. Meanwhile, a weapon that destroys everything is for sale. It appears to be entropic in nature from the clues Pynchon provides....Ringpungpa is quoted by Pynchon...."