"In the sky without karma, there is nothing to improve…
Sky like primordial presence
Has no crossed legs or straight posture…"

Dunhuang (help·info) (Dūnhuáng… in ancient times meaning 'Blazing Beacon') was a major stop on the ancient Silk Road. It was also known at times as Shāzhōu (沙州), or 'City of Sands', "or Dukhan as the Turkis call it."It is best known for the nearby Dunhuang Caves….., during the Sui and Tang dynasties, it was a major point of communication between ancient China and Central Asia. By the Tang Dynasty it became the major hub of commerce of the Silk Road. Early Buddhist monks arrived at Dunhuang via the ancient Northern Silk Road, the northernmost route of about 2,600 kilometres (1,600 mi) in length, which connected the ancient Chinese capital of Xi'an westward over the Wushao Ling Pass to Wuwei and on to Kashgar. For centuries, Buddhist monks at Dunhuang collected scriptures from the West, and many pilgrims passed through the area, painting murals inside the Mogao Caves or "Caves of a Thousand Buddhas." A small number of Christian artifacts have also been found in the caves (see Jesus Sutras), testimony to the wide variety of people who made their way along the Silk Road…. Dunhuang went into a steep decline after the Chinese trade with the outside world became dominated by Southern sea-routes, and the Silk Road was officially abandoned during the Ming Dynasty."…..http://en.wikipedia.org/wiki/Dunhuang 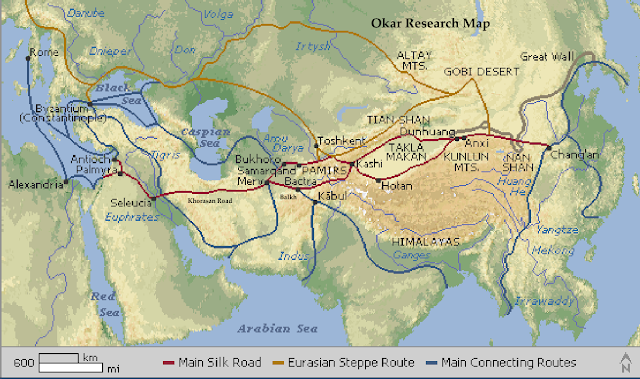 A large number of manuscripts and artifacts retrieved at Dunhuang have been digitized and made publicly available via the International Dunhuang Project…. The Dunhuang cave was closed in the early 11th century, and therefore any Dunhuang manuscript may have been written no earlier than that.

"Although the prayer is comprised of twenty-two verses, a set of six crucial verses offer the outline of the Dzogchen teachings represented through the discussion of Base, Fruit and Path. The six verse form is typical of the kind usually found in the earliest Dzogchen Nyingma text, “The Cuckoo of the Intellect” (Rig pa’i khu byug), a copy of which was among the works found in Dunhuang. The text is dated to eight century, and catalogued as No. 746 in the Sir Aurel Stein’s collection of manuscripts."….http://himalaya.socanth.cam.ac.uk/collections/journals/ret/pdf/ret_16_01.pdf

"The Indic origin of the early Dzogchen texts was disputed by Podrang Zhiwa Ö, a Western Tibetan monk and ruler of the 11th century, and a proponent of the “new transmissions”….pho brang zhi ba ’od…..Podrang Zhiwa Ö (1016-1111 AD)…the discovery in the 1980s of two Dzogchen texts among the Dunhuang manuscripts …Both have been translated and transcribed in Karmay’s The Great Perfection, and are even more easily accessible in Karen Liljenberg’s online translations….."….http://earlytibet.com/2008/01/08/early-dzogchen-i/ rCQGAH 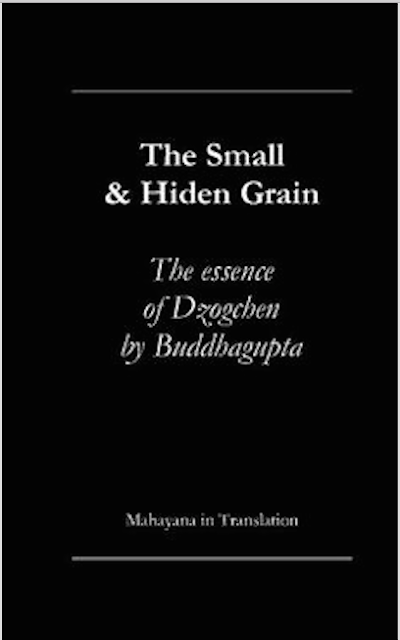 “The Small Hidden Grain” and commentary (IOL Tib J 594)…..This is a short verse text which argues that the ultimate state, repeatedly called “space” or “sky” (nam mkha’) is beyond conceptualization and cannot be reached through structured practice. The brief commentary divides the text into sections. The commentary also identifies the category of the text as Atiyoga and the author as Buddhagupta. Most of the root text also appears elsewhere in the writings of a Tibetan author, Nyen Palyang

“The Cuckoo of Awareness” and commentary (IOL Tib J 647)…..The root text here is a mere six lines (indeed an alternative title is “The Six Vajra Lines”). Again, the emphasis is on non-conceptualization and the uselessness of any practice based on striving toward a goal. The commentary expands on the basic lines without departing from these themes. In addition the commentary is concerned to reinterpret certain tantric concepts, like ‘great bliss’, and the samaya vows, in terms of nonconceptuality and spontaneous presence. The six lines of the root text appear in other Dzogchen texts, including the Kunjé Gyalpo…. "The Cuckoo of Awareness", traditionally said to be the first Dzogchen text to have been translated into Tibetan…..

"According to Podrang Zhiwa Ö… it is primarily based on an Indic source, or the lack of it. Yet there is nothing in these manuscripts to confirm an Indic source, not even the Sanskrit versions of the titles found in later Dzogchen texts. The naming of Buddhagupta as an author is interesting, and quite credible, but would hardly be likely to impress a critic who thought that these texts were fabricated by the Tibetans anyway. And then there is the date: with nothing to link them to the Tibetan imperial period, these manuscripts prove nothing about the presence, or otherwise, of Dzogchen texts during the time of the early Tibetan kings."….http://earlytibet.com/2008/01/08/early-dzogchen-i/

"The Cuckoo of Awareness" (Rig pa'i Khu Byug), together with a commentary, is found among the Dunhuang manuscripts at the British Library. The root text is also the first in a list of five early Dzogchen translations attributed to Vairocana, a contemporary of Padmasambhava (eighth century C.E.). Numerous translations of the root text are already available, but I have not seen any others of the Dunhuang commentary apart from that in Samten Karmay's "The Great Perfection", (Brill, 1988). At least the first section of the commentary was possibly written by Vairocana himself. A modern, and very helpful commentary on the text is included in Namkhai Norbu Rinpoche's "Dzogchen, the self-perfected state" (Snowlion, 1996). …..http://www.zangthal.co.uk/files.html

"The Small Hidden Grain (sBas pa'i rGum Chung) by Buddhagupta is one of the very early Dzogchen texts among the Dunhuang documents at the British Library. The main theme of the text is the Enlightened Mind. It is composed of three elements: an introduction, the main text (written in red ink in the Tibetan) and interlinear notes. As these notes appear to preserve the essential points of an oral teaching on the text, they are of especial interest. …..http://www.zangthal.co.uk/files.html

1. Dalton, Jacob, Tom Davis and Sam van Schaik. 2007. “Beyond Anonymity: Palaeographic Analyses of the Dunhuang Manuscripts” (with Tom Davis and Jacob Dalton) in Journal of the International Association of Tibetan Studies 3.
2. Karmay, Samten. 1980. “An Open Letter by Pho-brang Zhi-ba-’od” in The Tibet Journal 5.3: 1-28.
3. Karmay, Samten. 1988. The Great Perfection. Leiden: Brill.
4. Norbu, Namkhai. 1989. Dzogchen: The Self-Perfected State. London: Arkana…. Despite his enthusiasm for these manuscripts expressed in Dzogchen: The Self-Perfected State, Namkhai Norbu suggests he has his own reservations about this concept of “authenticity” in stating that Dzogchen is verified by the state of awareness itself, and not by historical accounts.

"The Mogao Caves or Mogao Grottoes (Chinese: 莫高窟; pinyin: Mògāo kū), also known as the Caves of the Thousand Buddhas (Chinese: 千佛洞; pinyin: qiān fó dòng), form a system of 492 temples 25 km (16 mi) southeast of the center of Dunhuang, an oasis strategically located at a religious and cultural crossroads on the Silk Road, in Gansu province, China. The caves may also be known as the Dunhuang Caves, however, this term is also used as a collective term to include other Buddhist cave sites in the Dunhuang area, such as the Western Thousand Buddha Caves, and the Yulin Caves farther away. The caves contain some of the finest examples of Buddhist art spanning a period of 1,000 years. The first caves were dug out in 366 AD as places of Buddhist meditation and worship. The Mogao Caves are the best known of the Chinese Buddhist grottoes and, along with Longmen Grottoes and Yungang Grottoes, are one of the three famous ancient Buddhist sculptural sites of China.An important cache of documents was discovered in 1900 in the so-called "Library Cave," which had been walled-up in the 11th century. The content of the library was dispersed around the world, and the largest collections are now found in Beijing, London, Paris and Berlin, and the International Dunhuang Project exists to coordinate and collect scholarly work on the Dunhuang manuscripts and other material. The caves themselves are now a popular tourist destination, with a number open for visiting."

"The manuscripts from the Library Cave date from fifth century until early eleventh century when it was sealed. Up to 50,000 manuscripts may have been kept there, one of the greatest treasure troves of ancient documents found. While most of them are in Chinese, a large number of documents are in various other languages such as Tibetan, Uigur, Sanskrit, and Sogdian, including the then little-known Khotanese. They may be old hemp paper scrolls in Chinese and many other languages, Tibetan pothis, and paintings on hemp, silk or paper. The subject matter of the great majority of the scrolls is Buddhist in nature, but it also covers a diverse material. Along with the expected Buddhist canonical works are original commentaries, apocryphal works, workbooks, books of prayers, Confucian works, Taoist works, Nestorian Christian works, works from the Chinese government, administrative documents, anthologies, glossaries, dictionaries, and calligraphic exercises."