"Tsadra Foundation…..Seeking Niguma, Lady of Illusion….Author: Sarah Harding……"But what of the actual woman behind the image? In the case of a reportedly historical woman such as Niguma, we should be able to find at least some hint of a subjective story, something to convince us that she is more than the object or projection of the practitioner’s realization. "……http://wordpress.tsadra.org/?p=785 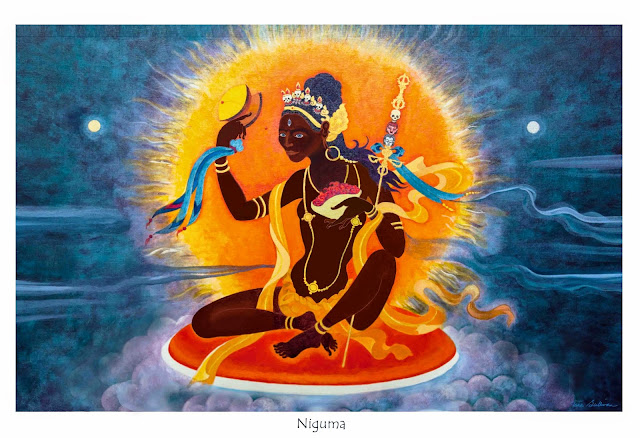 "The mysterious Niguma was an Indian woman from Kashmir who probably lived in the 11th century. Not only are the dates uncertain, but so too is almost everything about her. I will explore what there is to know and not to know about Niguma. What does stand firmly as testimony to her existence is her legacy of teachings, which form the very core of the Shangpa Kagyu lineage, one of the “Eight Great Chariots of the Practice Lineages” that were later identified as the main conduits through which experiential Buddhism spread from India to Tibet….. The Dakini Niguma’s place of birth was the Kashmiri city called “Incomparable.” Her father was the brahman Santivarman (Tib.: Zhi ba’i go cha). Her mother was Shrımati (dPal gyi blo gros ma). Her real name was Srıjñ›na (dPal gyi ye shes)…..In the Golden Rosary of Shangpa Biographies, Niguma’s life story consists of only six folia, half of which is a supplication prayer to her, while that of her disciple Khyungpo Naljor, called a “mere mention” (zur tsam), is 43 folia, and those of brother Naropa, Taranatha, Tangtong Gyalpo and so forth where Niguma is mentioned are much longer than that. Even more distressing, I have discovered that half of the remaining half of Niguma’s life story, the part that concerns her birthplace, appears to be directly lifted from a biography of Naropa! Perhaps she is just an adornment on the lives of great saints, a figment of mens’ imaginations.."…..http://wordpress.tsadra.org/?p=785

"Niguma is considered as one of most important and highly appreciated tantric yogini or Vajrayana Buddhist lady- teachers (dakinis). There are few certain facts about her life. She was born 10th century in Kashmir in rich Brahmin family and according to different sources was sister or consort of Naropa. It's said that her Buddhist realization originates directly from Buddha Vajradhara. Her main student was Tibetan meditation master Khyungpo Naljor, who traveled to India to receive transmission of her teachings. Later on he became founder of Shangpa Kagyu lineage."….http://en.wikipedia.org/wiki/Niguma 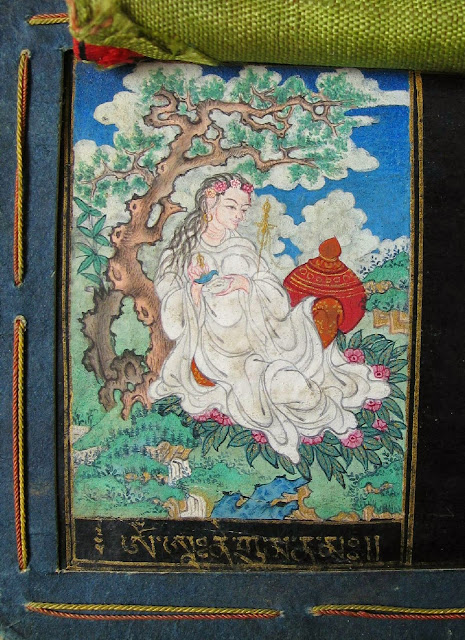 "Niguma (Wyl. ni gu ma) (b. 10th century) — an Indian yogini who is said to be either the sister or consort of Naropa. After having reached the tenth bhumi and achieved rainbow body, she could directly receive teachings from Vajradhara. She transmitted her six yogas, the Six Yogas of Niguma, to Khyungpo Naljor who founded the Shangpa Kagyü lineage."……http://www.rigpawiki.org/index.php?title=Niguma

"Niguma’s life does present us with a few crumbs. First of all, her birthplace is known to be in Kashmir, a hub of Buddhist activity, particularly of the tantric type, and probably in close quarters with the Shaivite tradition and other forms of esoteric Hinduism. The specific town, or perhaps monastery, is called Peme (dpe med) in Tibetan, meaning “without comparison,” translating Anupama. But we find in her biography that this is not a real town, exactly, but one that has been created by an illusionist. The first hard fact is already shaky."…..http://wordpress.tsadra.org/?p=785 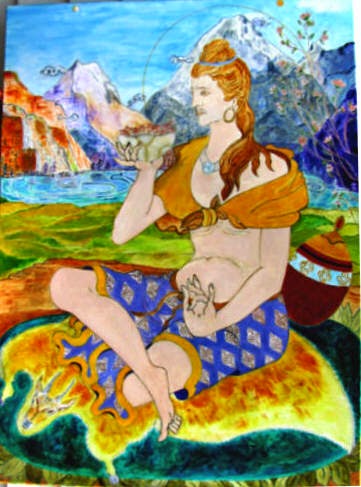 "After attaining his first realization of mahāmudrā under Maitrıpa, Marpa returned to Nāropa. This time, Nāropa sent Marpa to receive teachings from Niguma, Wisdom (Jnāna) Dākinī Adorned with Bone ornaments. She was Nāropa’s wife before he renounced worldly life to enter the dharma, and later she became his student and consort. Finally, she became a great teacher herself and her lineage of teachings was taken to Tibet (though not by Marpa) and continues to this present day."….http://wordpress.tsadra.org/?p=785 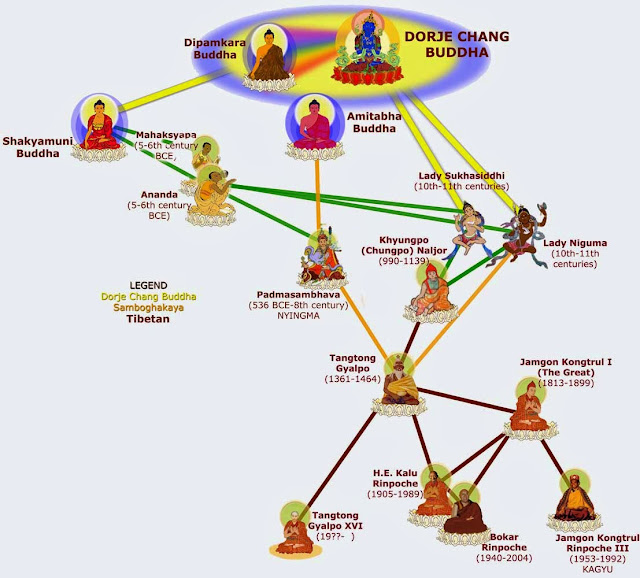 "Khyungpo Naljor asked where he could meet such an enlightened being and was told that her presence could manifest anywhere to highly purified beings. Unfortunate beings, those still caught in emotional afflictions, would find it very difficult to encounter her at all, since she had dissolved her physical form, attained the rainbow body, and achieved the level of Dorje Chang. Every now and again, however, she would visit the most sacred cremation grounds and, leading a host of dakinis, would preside over great ritual offering feasts (ganacakras). There someone might have an opportunity of seeing the great Niguma. ....As soon as Khyungpo Naljor heard the name of the great dakini, he felt such devotion, like an electric shock, that tears swelled up in his eyes. Immediately he set out to find her at the great charnel ground called Sosaling. As he traveled, he continuously made supplications to the Three Jewels. When he reached the cemetery, he saw above him in space at the height of seven banana trees, a female deity bluish in appearance, who wore elaborate bone ornaments and held a trident and a skull. As he gazed at her, he sometimes saw one deity, and sometimes many; some were in meditation posture, and some were dancing or making graceful gestures. He felt sure that this was the great Bodhisattva Niguma, and began to make reverent prostrations to her, sincerely imploring her for transmission of the teachings.....Niguma mocked his request and sneering, warned him, "I am a flesh-eating dakini and I have a large retinue of other dakinis like myself. When they come, we may eat you. Run away before it’s too late!".....http://www.shangpa.net/spip.php?article7

"Khedrup Khyungpo Naljor, whom Jamgon Kongtrul regarded as the greatest master ever to have graced Tibet after Guru Padmasambhava and the 25 disciples....his own name meant "the Yogin of the Garuda clan.".... At twelve, in accordance with the tradition on his father's side of the family, he studied the Bon teachings. Later on he practiced Dzogchen, and finally Mahamudra.".....http://rywiki.tsadra.org/index.php/Khyungpo_Naljor