"Dmanisi (Georgian: დმანისი) is a townlet and archaeological site in the Kvemo Kartli region of Georgia approximately 93 km southwest of the nation’s capital Tbilisi in the river valley of Mashavera. It is the earliest known hominid site outside of Africa…..Early human fossils, originally dubbed Homo georgicus and now as Homo erectus georgicus, were found at Dmanisi between 1991 and 2005. At 1.8 million years old, they are now believed to be a subspecies of Homo erectus and not a separate species of Homo. These fossils represent the earliest known human presence in the Caucasus…Subsequently, four fossil skeletons were found, showing a species primitive in its skull and upper body but with relatively advanced spines and lower limbs. They are now thought to represent a stage soon after the transition from Australopithecus to Homo erectus……Human habitation in the Caucasus goes back to the remotest antiquity. The hominid remains discovered in 1991 by David Lordkipanidze at Dmanisi, Kvemo Kartli (1.8 million years old) are the oldest found outside of Africa (Zatiashvili, 2008). Neanderthal remains have been found at Ortvale K’lde (1973) and elsewhere in the Caucasus (36,000-50,000 years old)."…http://en.wikipedia.org/wiki/Dmanisi ""There's a roughly 30,000-year gap in the archaeological record of Homo sapiens outside of Africa," said Wells. "The real expansion occurred in the Upper Paleolithic (around 40,000 years ago) into the uncharted territory of Asia proper….Wells says a second wave of hominids left Africa around 45,000 years ago, reproduced rapidly, and settled in the Middle East; smaller groups went off to India and China…..Around 40,000 years ago, as the grip of the Ice Age loosened and temperatures briefly became warmer, humans moved into Central Asia. Amid the bountiful grassy steppes, they multiplied quickly……"If Africa was the cradle of mankind, then Central Asia was its nursery," said Wells.."…..http://news.nationalgeographic.com/news/2002/12/1212_021213_journeyofman_2.html

"The spectacular fossilised skull of an ancient human ancestor that died nearly two million years ago has forced scientists to rethink the story of early human evolution…..Anthropologists unearthed the skull at a site in Dmanisi, a small town in southern Georgia, where other remains of human ancestors, simple stone tools and long-extinct animals have been dated to 1.8m years old…..Experts believe the skull is one of the most important fossil finds to date, but it has proved as controversial as it is stunning. Analysis of the skull and other remains at Dmanisi suggests that scientists have been too ready to name separate species of human ancestors in Africa. Many of those species may now have to be wiped from the textbooks…..The latest fossil is the only intact skull ever found of a human ancestor that lived in the early Pleistocene, "when our predecessors first walked out of Africa". The skull adds to a haul of bones recovered from Dmanisi that belong to five individuals, most likely an elderly male, two other adult males, a young female and a juvenile of unknown sex."….http://www.theguardian.com/science/2013/oct/17/skull-homo-erectus-human-evolution

'The site at Dmanisi was a busy watering hole that human ancestors shared with giant extinct cheetahs, sabre-toothed cats and other beasts. The remains of the individuals were found in collapsed dens where carnivores had apparently dragged the carcasses to eat. They are thought to have died within a few hundred years of one another…. "This is the first complete skull of an adult early Homo. They simply did not exist before," he said. Homo is the genus of great apes that emerged around 2.4m years ago and includes modern humans….The remains at Dmanisi are thought to be early forms of Homo erectus, the first of our relatives to have body proportions like a modern human. The species arose in Africa around 1.8m years ago and may have been the first to harness fire and cook food. The Dmanisi fossils show that H erectus migrated as far as Asia soon after arising in Africa……"Everything that lived at the time of the Dmanisi was probably just Homo erectus," said Prof Zollikofer. "We are not saying that palaeoanthropologists did things wrong in Africa, but they didn't have the reference we have. Part of the community will like it, but for another part it will be shocking news."…..http://www.theguardian.com/science/2013/oct/17/skull-homo-erectus-human-evolution

"The Caucasus Mountains are a mountain system in Eurasia between the Black Sea and the Caspian Sea in the Caucasus region….. The highest peak in the Caucasus range is Mount Elbrus in the Greater Caucasus, which rises to a height of 5,642 metres (18,510 ft) above sea level…. 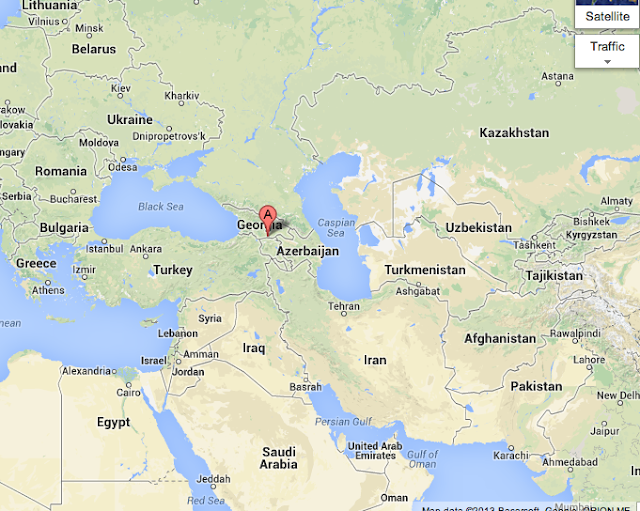 "The Kurgan hypothesis (also theory or model) is one of the proposals about early Indo-European origins, which postulates that the people of an archaeological "Kurgan culture" (a term grouping the Yamna, or Pit Grave, culture and its predecessors) in the Pontic steppe were the most likely speakers of the Proto-Indo-European language. The term is derived from kurgan (курган), a Turkic loanword in Russian for a tumulus or burial mound. The Kurgan model is the most widely accepted scenario of Indo-European origins……The Kurgan hypothesis was first formulated in the 1950s by Marija Gimbutas, who defined the "Kurgan culture" as composed of four successive periods, with the earliest (Kurgan I) including the Samara and Seroglazovo cultures of the Dnieper/Volga region in the Copper Age (early 4th millennium BC). The bearers of these cultures were nomadic pastoralists, who, according to the model, by the early 3rd millennium BC expanded throughout the Pontic-Caspian steppe and into Eastern Europe……According to the dominant Kurgan hypothesis in Indo-European studies, the Pontic-Caspian steppe was the homeland of the speakers of the Proto-Indo-European language, and these same speakers were the original domesticators of the horse."…..http://en.wikipedia.org/wiki/Pontic-Caspian_steppe

"By analyzing DNA from people in all regions of the world, geneticist Spencer Wells has concluded that all humans alive today are descended from a single man who lived in Africa around 60,000 years ago……According to the multi-regional model, an archaic form of humans left Africa between one and two million years ago, and modern humans evolved from them independently and simultaneously in pockets of Africa, Europe, and Asia…..Wells's work and that of others confirms the more widely accepted Out of Africa model, which says that all modern humans evolved in Africa and then left in several waves of migration, ultimately replacing any earlier species……Genetic evidence tells us that Homo sapiens are of recent origin and arose in Africa," said S. Blair Hedges, a molecular biologist at Pennsylvania State University……African populations have the most ancient alleles [gene pairs that code for specific traits] and the greatest genetic diversity, which means they're the oldest," Hedges explained. "Our species probably had arisen by 150,000 years ago, with a population of perhaps 10,000 individuals."…..http://news.nationalgeographic.com/news/2002/12/1212_021213_journeyofman_2.html

"…there is general agreement that Homo erectus, the precursor to modern humans, evolved in Africa and gradually expanded to Eurasia beginning about 1.7 million years ago…..By around 100,000 years ago, several species of hominids populated the Earth, including H. sapiens in Africa, H. erectus in Southeast Asia and China, and Neandertals in Europe……By around 30,000 years ago, the only surviving hominid species was H. sapiens…..Wells says his evidence based on DNA in the Y-chromosome indicates that the exodus began between 60,000 and 50,000 years ago."…..http://news.nationalgeographic.com/news/2002/12/1212_021213_journeyofman_2.html 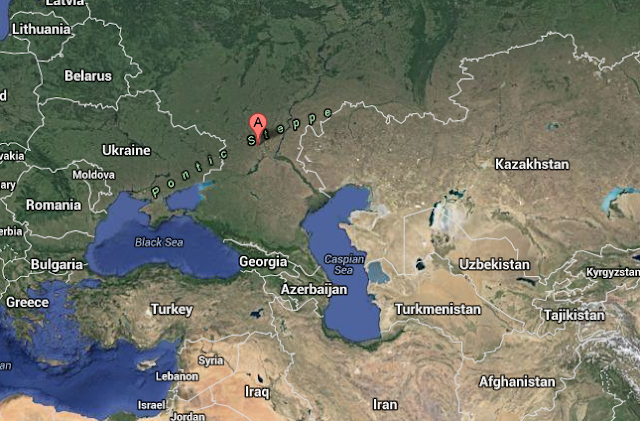 "The Neanderthals or Neandertals…… are an extinct species or subspecies of the genus Homo. They are closely related to modern humans…..Homo heidelbergensis (sometimes called Homo rhodesiensis) is an extinct species of the genus Homo which lived in Africa, Europe and western Asia from at least 600,000 years ago, and may date back 1,300,000 years. It survived until 200,000 to 250,000 years ago. It is very likely the direct ancestor of Homo sapiens in Africa and the Neanderthals in Europe, and perhaps also the Denisovans in Asia. It was first discovered near Heidelberg in Germany in 1907 and named by Otto Schoetensack….. H. heidelbergensis may have been the first species of the Homo genus to bury their dead……H. heidelbergensis was a close relative (most probably a migratory descendant) of Homo ergaster. H. ergaster is thought to be the first hominid to vocalize…. and that as H. heidelbergensis developed more sophisticated culture proceeded from this point….Recent genomic results from the group of Svante Pääbo also show that 30,000 years ago at least three major subspecies coexisted: Denisovans, Neanderthals and anatomically modern humans. Today, only H. sapiens sapiens remains, with no other extant species or subspecies."…http://en.wikipedia.org/wiki/Homo_(genus)

Email ThisBlogThis!Share to TwitterShare to FacebookShare to Pinterest
Labels: Anthropology