Abhisheka / Abhishekam / Abhiseka….is a Sanskrit term comparable to puja, yagya and arati that denotes: a devotional activity; an enacted prayer, rite of passage and/or religious rite or ritual. Within this range of senses, abhiṣeka is common to all Dharmic faiths such as Hinduism, Buddhism and Jainism. In monarchy, the royal coronation ceremony is called rajyabhishek……conducted by priests, by pouring libations on the image of the deity being worshipped, amidst the chanting of mantras. Usually, offerings such as milk, yogurt, ghee, honey, Panchaamrutam, sesame oil, rosewater, sandalwood paste may be poured among other offerings depending on the type of abhishekam being performed."….http://en.wikipedia.org/wiki/Abhisheka 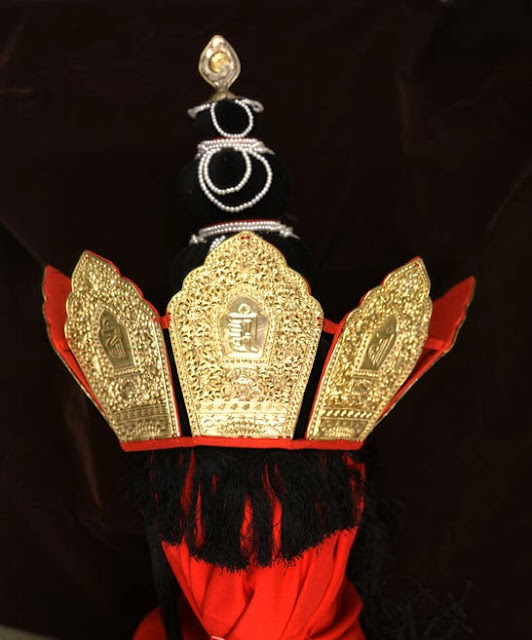 "In the Indo-Tibetan Buddhist tradition, an abhisheka can be a method for performing esoteric transmission, a way to offer blessings of a lineage to participants, or it can be an empowerment to begin a particular meditation practice. It originally was used as a consecration rite. Water from the four oceans was poured out of golden jars onto the head of the royalty. It was used during the monarch's accession ceremony and also his investiture ceremony."…..Hayward, Jeremy (2008) Warrior-King of Shambhala: Remembering Chögyam Trungpa. Boston: Wisdom. 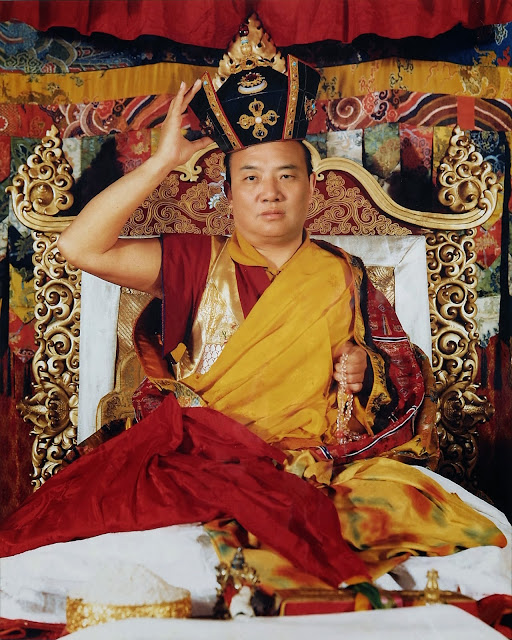 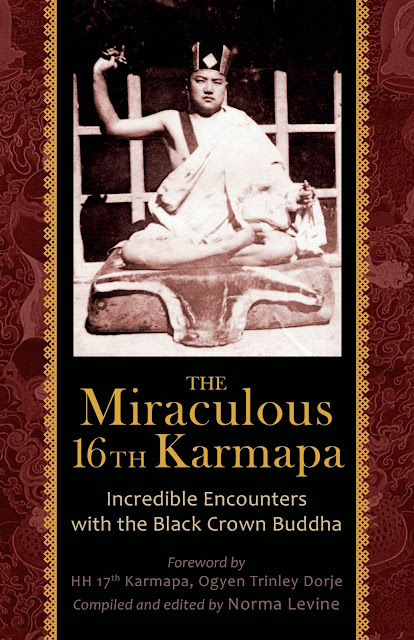 "Shingon Buddhism…..The Abhiseka Ritual in Shingon Buddhism is the initiation ritual used to confirm that a student of esoteric Buddhism has now graduated to a higher level of practice. The kanji used literally mean "pouring from the peak", which poetically describes the process of passing on the master's teachings to the student. … This ritual is generally only offered at Mt. Koya in Wakayama Prefecture in Japan."….Abe, Ryuichi (1999). "The Weaving of Mantra: Kukai and the Construction of Esoteric Buddhist Discourse". Columbia University Press.

"In the Mahavairocana Sutra ……Mahavairocana Buddha reveals the Mandala of the Womb Realm to Vajrasattva and teaches the rituals that relate to the Womb Mandala which are known as, and an example of, abhisheka….In Vajrayana Buddhism, the Womb Realm (Skt. garbhakosa-dhatu, Japanese: 胎蔵界 taizōkai) is the metaphysical space inhabited by the Five Wisdom Kings."…..http://en.wikipedia.org/wiki/Womb_Realm

"The Kalachakra originates in the ancient Vedic tradition in India which existed long before Buddhism appeared and refers to many different traditions, for example the Hindu; Saivite, Samkya, Vaishnava, the Vedas, Upanisads and Puranas traditions, but also Jainism…..the Kalachakra mandala includes deities which are equally accepted by Hindus, Jainas and Buddhists….There are different levels of abhisheka ritual with Kalachakra. …..entrance level rituals are openly presented to general public, the more advanced ones only conducted in secret…..The ritual consists of a public part and a secret part, staged by the participants behind closed doors. Pupils with little prior knowledge or even people with none may participate in the public initiations. In contrast, the secret initiations are only accessible for the chosen few."……….http://en.wikipedia.org/wiki/Abhisheka

"….the texts sometimes suggest that the possibility of reaching the highest level of enlightenment in the Kalachakra Tantra within a single lifetime lies open to everybody…..However, in the Vimalaprabha, the earliest commentary upon the original text, it is stated in unmistakable terms that laity (non-monks) may absolutely not set foot upon the path to enlightenment"……Newman, John. Dissertation: The Outer Wheel of Time: Vajrayàna Buddhist Cosmology in the Kālacakratantra. Ph.D. conferred December 20, 1987. 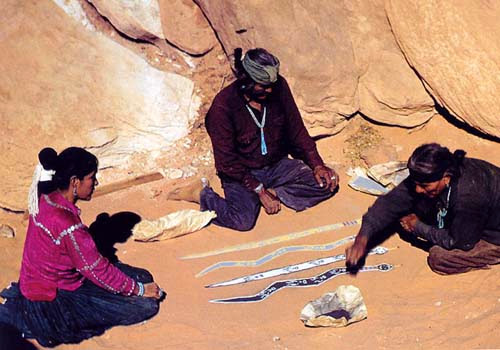 "Ritual Crown (dbu rgyan) ……A lama 'crown' consisting of five thin copper panels with arched tops, painted gold, and attached to each other with a red cord. In the center of each panel is a Sanskrit syllable corresponding to one of the five meditational or cosmic Buddhas (dhyani-buddha). The crown is worn together with a stitched fabric topknot with loosely hanging strands of cotton in the rear. Such crowns are used by lamas and monks during certain religious ceremonies such as tantric initiations rituals (abhisheka, dbang), and are styled after the iconographic representations of 'Enjoyment Body' (sambhogakaya, longs sku) Buddhas' ornaments, which are in turn based upon the traditional garb of the royal class. While wearing the crown, the lama or monk visualizes himself as the actual deity. Such crowns may be worn by several initiates at once during a large initiation ceremony, or individually by a single monk during a 'self-initiation' ceremony. They may also be worn during certain ritual dances."……http://www2.lib.virginia.edu/exhibits/dead/ceremon.html

"The Rigden Abhisheka enters the student into the practice of the Werma Sadhana. It is open to graduates of Shambhala Vajrayana Seminary who have completed their Shambhala ngöndro and to students who have already received the Werma Sadhana and completed their Kagyü Ngöndro….After the year 2000, with the merging of the secular teachings of Shambhala and the Buddhist teachings of Vajradhatu into Shambhala Buddhism, completion of Shambhala Vajrayana Seminary (which itself requires taking Buddhist refuge and bodhisattva vows, as well as Buddhist vajrayana samaya vows) became a condition for receiving the highest Shambhala teachings, such as those of Werma and the Scorpion Seal Retreat."…..http://en.wikipedia.org/wiki/Shambhala_Buddhism

"The Navjote Ceremony of the Parsis….The word Navjote is made up of two words Nav (Avesta, nava; Sans. nava; Lat. novus) new and Zote (Avesta zaotar from zu, Sans hu to offer prayers) one who offers prayers. Hence, the word would mean a new initiate to offer Zoroastrian prayers……The sacred shirt is symbolic in its structure. It is made of white cambric. White color is symbolic of innocence and purity, and, as such, is the symbol of the Mazdayasnian or Zoroastrian religion (Yasht 10.126). It must be made up of two pieces of cloth sewn together on the sides, so that one seam may be on the right hand side, and the other on the left hand side, thus dividing the shirt into two parts, the front part and the back part. These two parts -- the front and the back -- are said to be symbolic of the past and the future, both related to each other through the present."….http://www.avesta.org/ritual/navjote.htm

"Navajo spiritual practice is about restoring balance and harmony to a person's life to produce health. One exception to the concept of healing is the Beauty Way ceremony: the Kinaaldá, or a female puberty ceremony. Others include the Hooghan Blessing Ceremony and the "Baby's First Laugh Ceremony." Otherwise, ceremonies are used to heal illnesses, strengthen weakness, and give vitality to the patient. Ceremonies restore Hózhǫ́, or beauty, harmony, balance, and health."….http://en.wikipedia.org/wiki/Navajo_people

"Initiation, Empowerment or wangkur…..A characteristic feature of Vajrayana Buddhism is the requisite ritual for participating in the worship, service and practice (Skt.: sadhana) of a deity or bodhisattva. This is the process by which a lama with experience in the particular practice confers on others the description, explanation, visualization and order of the practice, along with appropriate offerings and specific mantras. It is more than the sum of its parts though; it is a lineage transmission of blessing and energy…..The empowerment or initiation grants permission, bestows help with, and gives access to, the benefits of a tantric practice. It can be short or long, and complex or very simple. It normally includes the wang (Skt. abisheka) which is the actual consecration or dedication of the student to the practice-deity, the lung which is the oral transmission -- a recitation of the procedural text or manual (sometimes in a condensed or speedily-read version,) and the tri or instructions on how to do the practice. In special cases, a brief ritual-touching of the student with the text, accompanied by recitation of the associated mantra is sufficient…..Kalu Rinpoche (d. 1989,) who served for many years as Chief Meditation Master of the Kagyu, in Gently Whispered (New York: Station Hill, 1994) said: "Most tantrayana or vajrarana visualization and mantra practices require that an initiation and subsequent authorization and instruction be given by a qualified lama before the sadhana, or ritual practice, can begin….However, a few practices, those that were given publicly by Lord Buddha Shakyamuni, do not fall under such restrictions. Very definitely, all the practices given in the Sutras have the full blessing of the Buddha and therefore can be practiced if one has the aspiration to do so. Such practices include those of the noble Chenrezig and of the mother of the buddhas, Green Tara."….http://www.khandro.net/TibBud_empowerment.htm

"Chogyal Namkhai Norbu will offer a Dzogchen Empowerment and Transmission via webcast. This will be a direct introduction to the nature of mind and the non-dual state of instant presence…..Newcomers who want to participate at this transmission should be seriously interested in the teachings that are transmitted by our teacher Chogyal Namkhai Norbu Rinpoche and practiced in the worldwide Dzogchen Community. …..Originally Rinpoche had this idea of a "Transmission at a Distance" because he wanted to help people in difficult situations who could not travel at that time to meet the Teacher. This transmission will enable them to practice the Dzogchen teachings transmitted by him without being in his direct physical presence…..In order to learn the appropriate mantras, mudras, and melodies correctly, it is best to hear an explanation from a knowledgeable student of Chogyal Namkhai Norbu in advance of the event….People can also access the Worldwide Transmission webcast at home by logging on at ." …..http://groups.yahoo.com/neo/groups/DharmaEventsNY/conversations/topics/2973

A Summary of How the Abhisheka and Practice of Shri Kalachakra Was Propagated in India and brought to Tibet. From a booklet distributed during the Kalachakra initiation by His Eminence Jamgon Kongtrul Rinpoche in August 1990, Toronto.

An Introduction to the Kalachakra, Geshe Wangdrak (losang Tenzin) Part of paper printed for the 1994 Kalachakra initiation by HHDL in Lahaul, Spiti.