Mother and Child Luminosities: Inner Radiance of the Ground & Path

"A fundamental distinction in the Dzogchen literature of 'od gsal (Wylie) is that of 'inner radiance of the ground' (Wylie: gzhi'i 'od-gsal) and the 'inner radiance of the path' (Wylie: lam-gyi 'od-gsal); otherwise known as the mother and child luminosity respectively. "The luminosity experienced in meditation is called the path luminosity, simile luminosity, or child luminosity. The true luminosity of our awakened nature is called the basic luminosity or mother luminosity; it dawns at the moment of death, and if it is recognized, the mother and the child meet and become one in liberation."….. Fremantle, Francesca (2001). Luminous Emptiness: Understanding the Tibetan Book of the Dead. Boston: Shambhala Publications. ISBN 1-57062-450-X. p.198-9

gzhi lam gyi 'od gsal gnyis dbyer med…..the inseparability of the Clear Lights of the ground and of the Path….http://rywiki.tsadra.org

"Interview with Khenchen Thrangu Rinpoche after the passing of Tulku Urgyen Rinpoche
Q: What does it mean when some lamas remain in tukdam?
R: Generally speaking, tukdam comes about when someone has rested evenly in luminous wakefulness during his life, usually called samadhi, and occurs to the same degree as his experience. When he then passes away, there is what we call 'the mingling of the mother and child luminosities,' which means that the ground luminosity and the luminosity of that person's practice mingle indivisibly…..At that moment, the experience of luminous wakefulness is very strong and one simply remains in its composure naturally, meaning that high lamas or someone with deep experience and realization will naturally dissolve into or expand into this state of samadhi. When the ground luminosity dawns by itself, they recognize it, and then remain in equanimity - that is what is called 'remaining in tukdam.'…..No doubt an ordinary person also experiences the ground luminosity, but because of not having trained in it during their life, they don't recognize this ground luminosity, and failing to recognize, they are therefore unable to remain in tukdam. On the other hand, great masters naturally mingle the mother and child luminosities, - in the very moment the ground luminosity unfolds within their direct experience, they acknowledge this basic state and remain in samadhi ­ this is called 'remaining in tukdam.'….It is due to the strength of the samadhi that the body heat doesn't disappear completely, that the skin color doesn't fade, and that the body is able to remain in an upright sitting posture. Due to such visible signs, we are able to conclude that the person is in tukdam."……http://www.rangjung.com/authors/tribute_from_Khenchen_Trangu_Rinpoche.htm 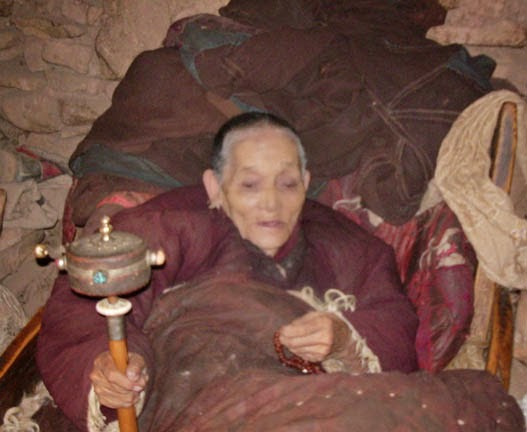 "The great yogini of Gebchak Gonpa, Sherab Zangmo...near the time of her death her complexion lightened, and her face and body became youthful and small like a child’s...The sky remained like a morning sky, bright and clear for the whole day of Sherab Zangmo’s death, and she remained in tukdam meditation for six days afterwards.".....http://gebchakgonpa.org/sherab-zangmo-passes/

"THE MEETING OF MOTHER AND CHILD….There is a way in which we can prepare completely to recognize the dawning of the Ground Luminosity at the moment of death. This is through the very highest level of meditation (as I have explained in Chapter 10, "The Innermost Essence"), the final fruition of the practice of Dzogchen. It is called the …. "union of two luminosities," which is also known as "the merging of Mother and Child Luminosities." The Mother Luminosity is the name we give to the Ground Luminosity. This is the fundamental, inherent nature of everything, which underlies our whole experience, and which manifests in its full glory at the moment of death. The Child Luminosity, also called the Path Luminosity, is the nature of our mind, which, if introduced by the master, and if recognized by us, we can then gradually stabilize through meditation, and more and more completely integrate into our action in life. When the integration is complete, recognition is complete and realization occurs. Even though the Ground Luminosity is our inherent nature and the nature of everything, we do not recognize it, and it remains as if hidden. I like to think of the Child Luminosity as a key the master gives us to help us open the door to the recognition of the Ground Luminosity, whenever the opportunity arises. Imagine that you have to meet a woman arriving by plane. If you have no idea what she looks like, you might go to the airport and she could walk right past you and you would miss her. If you have a photo of her that is a good likeness, and you have a good picture of her in your mind, then you will recognize her as soon as she approaches you."…….THE TIBETAN BOOK OF LIVING AND DYING

MEETING OF MOTHER AND CHILD LUMINOSITIES …."That "Aha!" experience is what we call the meeting of the mother and child luminosities. The motherlike luminosity is the ground luminosity, the basic reality of all phenomena. The childlike luminosity is our individual experience of that nature. In reality, these two are not separate; they are separated only by our perception of being apart. When the two meet and then merge into one, we have a nondual experience of luminosity. It is at this very moment that we can attain liberation in the bardo of dharmata. If we can recognize and rest in that experience, then liberation is certain. There is no doubt. When accomplished yogis rest in that samadhi and realize the nature of mind, there is no time limit on how long they can rest. Once we realize the nature of mind, then that is our enlightenment, and it has no measurable time. We can only measure the time we have rested in a nondual state if our resting is short and unstable. Then when we come out of that resting state, we can look back on it. We can say it was five minutes, ten minutes, one hour or two hours. Therefore, it is very important to train in meditation practice now and make every effort to recognize that luminosity in the bardo of this life. Even if we fail, our training may enable us to recognize it in this bardo."….From "Mind Beyond Death" by Dzogchen Ponlop

"….the "external son," are based in external or surrounding space, which is the "external mother. ...."Inner luminosity originates in the heart and passes through two channels that connect the empty space of the heart with the external empty space of the sky through the eyes." (Wangyal:1993..pg 119)" ...….Wonders of the Natural Mind: The Essence of Dzogchen in the Native Bon Tradition…

"Patrul Rinpoche: 'Clear light of the moment of the ground' (Tibetan: gzhi dus kyi 'od gsal)' as the: ...nature of the mind of all beings, pure from the beginning and spontaneously luminous; fundamental continuum (of awareness), potential of Buddhahood...It can be "introduced" by a realized master to a disciple, who then stabilizes and develops that experience through the profound practices of the Great Perfection. Ordinary beings perceive it only for a flash at the moment of death."….Rinpoche, Patrul (author); Brown, Kerry (ed.); and Sharma, Sima (ed.)(1994). The Words of My Perfect Teacher (Tibetan title: kunzang lama'i shelung). Translated by the Padmakara Translation Group.

Sufism…."According to Ibn Arabi, the best way to prepare for a good afterlife is to recover the relationship with God by discovering His True nature. According to William Chittick…The world after death is the awakening to the endless self-disclosures of the Real."….http://www.patheos.com/Library/Sufism/Beliefs/Afterlife-and-Salvation.html