When Ashoka's army took 150,000 people captive and slew 100,000 people at Orissa, unlike Alexander at Tyre and Genghis Khan at Balkh, he experienced tremendous revulsion and an abhorrence of any killing and suffering, human or animal, and never again waged war. 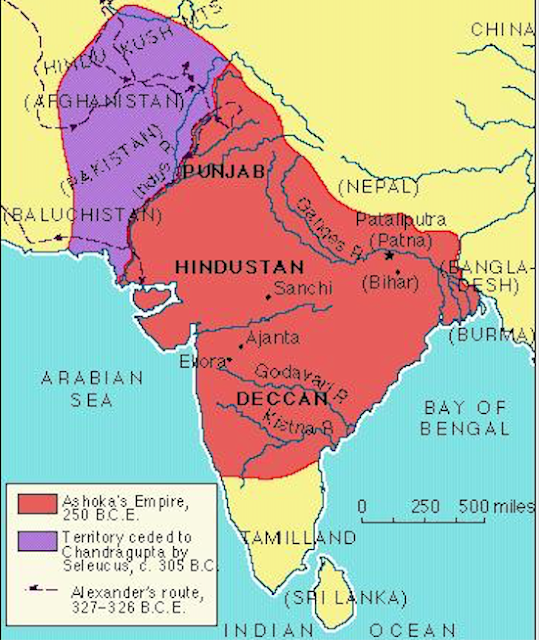 "Ahimsa (Sanskrit: अहिंसा; IAST: ahiṃsā, Pāli:avihiṃsā) is a term meaning do not injure. The word is derived from the Sanskrit root hiṃs – to strike; hiṃsā is injury or harm, a-hiṃsā is the opposite of this, i.e. cause no injury, do no harm.Ahimsa is also referred to as nonviolence, and it applies to all living beings including animals. Ahimsa is one of the cardinal virtues and an important tenet of major Indian religions (Buddhism, Hinduism, and Jainism). Ahimsa is a multidimensional concept, inspired by the premise that all living beings have the spark of the divine spiritual energy, to hurt another being is to hurt oneself. Ahimsa has also been related to the notion that any violence has karmic consequences. While ancient scholars of Hinduism pioneered and over time perfected the principles of Ahimsa, the concept reached an extraordinary status in the ethical philosophy of Jainism and Buddhism. Indian leader Mahatma Gandhi strongly believed in the principle of ahimsa. Ahimsa's precept of 'cause no injury' includes one's deeds, words, and thoughts.Classical literature of Hinduism such as Mahabharata and Ramayana, as well as modern scholars debate principles of Ahimsa when one is faced with war and situations requiring self defense."…. http://en.wikipedia.org/wiki/Ahimsa

The Maurya Dynasty (321-185 BC) emerged following the withdrawal of Alexander the Great from India in 325 BC, when the dynasty's founder, Emperor Chandragupta, seized the throne of the Nanda Dynasty at Magadha (South Bihar), the leading kingdom of Upper India at the time. After Alexander's withdrawal from India, Chandragupta defeated Alexander's General, Seleucus Nicator, and a vast area of the territory originally conquered by Alexander in India was ceded to Chandragupta by the General in return for five hundred elephants. The cession was followed by the conclusion of a treaty of alliance and friendship, and eventually the General and the Emperor cemented their friendship by intermarriage between their families.

"The Indian emperor Ashoka in his 250 BCE Edicts used the word "eusebeia" as a Greek translation for the central Buddhist and Hindu concept of "dharma".....The word was used in Classical Greece where it meant behaving as tradition dictates in one's social relationships and towards the gods. One demonstrates eusebeia to the gods by performing the customary acts of respect (festivals, prayers, sacrifices, public devotions). By extension one honors the gods by showing proper respect to elders, masters, rulers and everything under the protection of the gods."

One outcome of this treaty of alliance and friendship was the sending of a Greek ambassador, Megasthenes, by Nicator to Chandragupta's court. During his residence, Megasthenes wrote detailed reports of life at the court and of the organization of the Maurya Empire. Unfortunately his reports are lost, but fragments of them are repeated in other Greek writings which have survived. Through them, some precious details of the Maurya Dynasty, the Royal Court, the capital city and the remarkable system of government of the empire are known.
Alexandria in Arachosia was a city in ancient times that is now called Kandahar in Afghanistan….Megasthenes lived with Sibyrtius, satrap of Arachosia,…http://en.wikipedia.org/wiki/Megasthenes 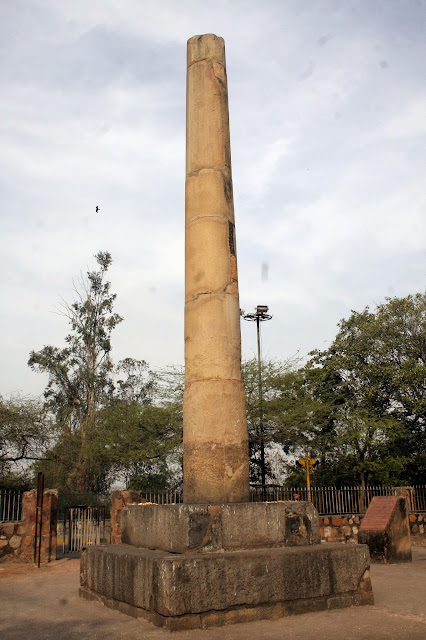 Chandragupta reigned for twenty-four years (321-297 BC) before abdicating his throne in favour of his son, Bundusara. His system of government continued under Bundusara, who left no noticeable mark upon the empire. Bundusara was succeeded by his son, Asoka, in 273 BC, although, as was usual, Asoka was not consecrated as Emperor until 265 BC…..The Contribution of the Emperor Asoka Maurya to the development of the humanitarian ideal in warfare"….1995 Article, International Review of the Red Cross, No. 305, by Gerald Draper

"Emperor Asoka's conquest of the Kalingas and subsequent remorse …..With the capability for waging war that he inherited and augmented, Asoka defeated the three Kalinga kingdoms (modern Orissa) in about 256 BC - the sixteenth year of his reign and the eighth after his consecration. Historical evidence - consisting of little other than the surviving thirty-four edicts - does not reveal why he went to war with the Kalingas. However, one of his edicts - the famous Thirteenth Edict or " Rock Edict " , also known as the " Conquest Edict " , of 257 BC -, declared that the victory was overwhelming and losses among the defeated peoples were particularly devastating: his army took 150,000 people captive and slew 100,000, and many times that number died in the conquest."….Reflections on Law and Armed Conflicts...By Gerald Draper

"Ashoka's response to the Kalinga War is recorded in the Edicts of Ashoka. The Kalinga War prompted Ashoka, already a non-engaged Buddhist, to devote the rest of his life to Ahimsa (non-violence) and to Dharma-Vijaya (victory through Dharma). Following the conquest of Kalinga, Ashoka ended the military expansion of the empire, and led the empire through more than 40 years of relative peace, harmony and prosperity.

"From the time of his victory over the Kalingas in 256 BC, and the consequent remorse, until the end of his reign in 232 BC, Asoka never waged another war. Indeed, in the years following his victory, he spent time piously retracing the steps of the Buddha and raising stupas inscribed with moral injunctions and imperatives at holy places of pilgrimage; and for some two years he became a member of a Buddhist order without relinquishing his role as Emperor….His conversion to Buddhism, effected with the help of his own teacher, Uprag upta, was gradual. Even though he did little to change the system of government he inherited, he introduced a novel and powerful moral idealism - a moral rule or " way of life " in the Buddhist sense as he understood it - which he called the " Law of Piety " ."….http://www.icrc.org/eng/resources/documents/misc/57jmf2.htm

One of the most radical of Asoka's reforms was the almost total prohibition on hunting and slaying of animals for food. … This prohibition of animal slaughter corresponded to Asoka's moral revulsion for human slaughter in warfare and his subsequent abhorrence of any killing and suffering.(Gerald Draper)

"Like many great visionary leaders of the past and present, Ashoka's undistinguished descendants, were unable to sustain his moral mission and the Law of Piety lost its vigour. After his death in 231 BC the empire was divided, its power declined and the Law of Piety passed into history."….(Gerald Draper) 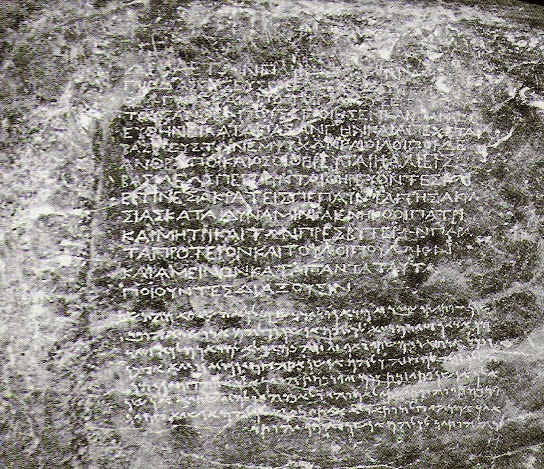 "Inscriptions made by the Mauryan Emperor Ashoka, a fragment of Edict 13 in Greek, as well as a full Edict, written in both Greek and Aramaic has been discovered in Afghanistan. It is said to be written in excellent Classical Greek, using sophisticated philosophical terms. In this Edict, Ashoka uses the word Eusebeia ("Piety") as the Greek translation for the ubiquitous "Dharma" of his other Edicts written in Prakrit: "Ten years (of reign) having been completed, King Piodasses (Ashoka) made known (the doctrine of) Piety (εὐσέβεια, Eusebeia) to men; and from this moment he has made men more pious, and everything thrives throughout the whole world. And the king abstains from (killing) living beings, and other men and those who (are) huntsmen and fishermen of the king have desisted from hunting. And if some (were) intemperate, they have ceased from their intemperance as was in their power; and obedient to their father and mother and to the elders, in opposition to the past also in the future, by so acting on every occasion, they will live better and more happily." (Trans. by G.P. Carratelli)

Piodasses (one of the titles of Ashoka: Piyadassi or Priyadarsi.....Two edicts in Afghanistan have been found with Greek inscriptions, one of these being a bilingual edict in Greek language and Aramaic. This edict, found in Kandahar, advocates the adoption of "Piety" (using the Greek term Eusebeia for Dharma) to the Greek community:
Ten years (of reign) having been completed, King
Piodasses (one of the titles of Ashoka: Piyadassi or Priyadarsi,
"He who is the beloved of the Gods and who regards
everyone amiably") made known (the doctrine of)
Piety (Greek:εὐσέβεια, Eusebeia) to men; and from this moment he has made
men more pious, and everything thrives throughout
the whole world. And the king abstains from (killing)
living beings, and other men and those who (are)
huntsmen and fishermen of the king have desisted
from hunting. And if some (were) intemperate, they
have ceased from their intemperance as was in their
power; and obedient to their father and mother and to
the elders, in opposition to the past also in the future,
by so acting on every occasion, they will live better
and more happily. (Trans. by G. P. Carratelli)