"Tapihritsa (c 7th ~ 8th century) (or Tapahritsa; Wylie: Ta pi hri tsa) is a Bönpo who achieved the Dzogchen mastery of the rainbow body and consequently, as a fully realised Trikaya Buddha, is invoked as a yidam…. The historical Tapihritsa was born in Zhang Zhung of a family of nomads. Tapihritsa's principal teacher was Dawa Gyaltsen. Tapihritsa was contemporaneous with Ligmincha, King of Zhang Zhung and Trisong Detsen, Emperor of Tibet. John Myrdhin Reynolds has published "Space, Awareness, and Energy" (2007), which is a study of the origins of Bön Dzogchen in Western Tibet and Central Asia and contains translations of primary texts that showcase Tapihritsa. Tapihritsa is often visualized as representing the realization of all the masters of the Zhang Zhung Nyen Gyu lineage, one of the three Bön Dzogchen lineages."…..http://en.wikipedia.org/wiki/Tapihritsa 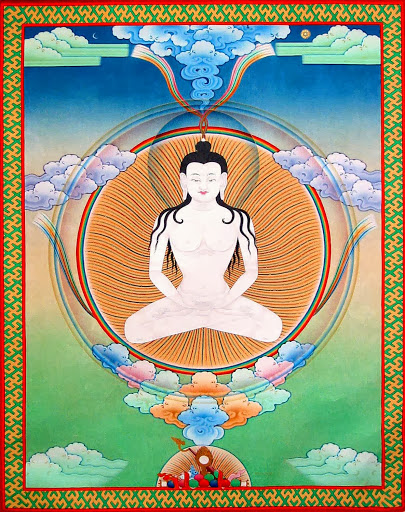 "One should visualize in front of oneself Ta pi hri tsa in the sky, in a form of a young child or eternal youth, since this was the form he used to reveal himself to Gyer spungs pa. During visualization, one should recite the Prayer to Ta pi hri tsa:

E ma ho!
How wonderful!
Mind emanation of Kuntu Zangpo, (Your) body color shines like the white crystal,
Pure and clear rays of light emanate (from You) in the ten directions. (You) are unadorned and naked, (representing) the essential meaning of the Primordial State.
(Through Your) compassion and two-fold knowledge, (You) care for the benefit of all sentient beings.
The heart essence of the enlightened ones is Dzogchen, the highest of all (teachings),
The summit of all vehicles and the essence of all the Tantras, transmissions and pith instructions.
The Natural State of the Base, (is the source) of both the liberation of nirvāna and delusion of samsāra.
Through sounds, lights and rays, all the faults (of samsāra) and all the qualities (of nirvāna) completely banish.
Having totally cleared away the darkness of the minds (trapped in the cycle of) rebirths,
The Base, empty and without any origin, is instantly realized, (together with five) paths (and ten bhūmis).
Experiences and realization manifest (on the Path), and samsāra and nirvāna are liberated into the (Nature of) Mind, Trikāya of the Fruit manifests in the space.
To You, Ta pi hri tsa, the protector of all beings, I pray with wholehearted devotion.
(That you) bestow the blessing and empowerments to me and others, All obstacles, inner, outer and secret, may they be pacified.
Having been liberated of the illusory and ignorant apprehension of self, and having perfected view and action, the intrinsic awareness manifests.
I pray, at this moment, that the meaning of the Great Perfection, that is primordially empty and baseless, beyond conception, be bestowed upon me. To you, Ta pi hri tsa, the lord protector of all beings
I pray that you hold with compassion the beings of six realms and release their minds.


This prayer was dedicated single-pointedly by Gyer spung snang bzher lod pos to the mind-emanation, Ta pi hri tsa. May this prayer be auspicious and virtuous!

"Tapihritsa was an ordinary person from a nomadic family in the country of Zhang Zhung. The main teacher of Tapihritsa was Dawa Gyaltsen. Tapihritsa practiced for nine years before he attained illumination. The place where he practiced is a holy place outside Mount Kailesh, a place called Senge Tap. After nine years of practice there, Tapihritsa achieved the rainbow body…..http://www.kabirkadre.com/study/prose/Tenzin/Tapihritsa.htm 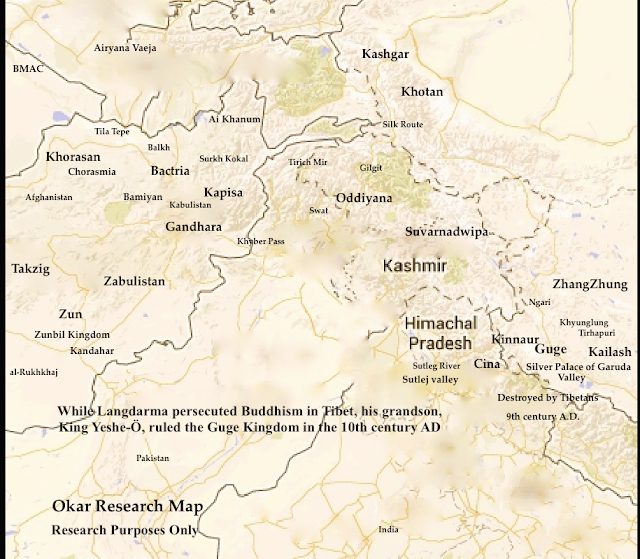 The Tapihritsa and Nangzher Lopo debate……."Tapihritsa was carrying a lot of wood in his bag for cooking food. He went to visit Nangzher Lopo to pay respect. Nangzher Lopo hesitated when he saw the behavior of this young boy. The way he was paying respect seemed special and mature, and he thought, "Who is this guy?" So Nangzher Lopo said to the boy that it looked like he had worked through some doctrines and tenets. He asked him, "Who is your teacher and what is your practice? What are you carrying? Why are you behaving this way?" The young boy said, "My teacher is this vision. Visions are my teacher. My practice is thought-less, my meditation is all sentient beings. What I am carrying is my thoughts. I am behaving like this because I am a servant of the family of samsara." Since the young boy answered in that way, Nangzher Lopo was surprised and they entered into a debate. Nangzher Lopo said, "If these visions are your master, it probably means you don't have a master; if your meditation is thought-less, you don't need food; if you are meditating on sentient beings, that means you are enlightened; if you are carrying thoughts, you don't have desire; and if you are a servant of samsaric beings, you don't suffer!"
The young boy answered again (and in this debate the teachings have already begun). "If you don't realize that vision is your master, who taught Samantabhadra?" asked the young boy. "My practice is thought-less because in the base there is no thought, and when there is a thought, there is no practice. I am meditating on all sentient beings because I don't separate or discriminate among others, because if one is discriminating there won't be meditation. I am carrying thoughts. That means I don't have thoughts. Because I don't have thoughts, I don't have desire. I realize that everything is illusion. I help all sentient beings because I don't make a distinction between suffering and not suffering."
Then the debate continued. "If you are that good," says Nangzher Lopo, "we need to go in front of the king and debate. If you win, you will become my master. If I win, you will be punished by the king." Tapihritsa had a big laugh. "All karma and conditions, causes and results are false." Basically, he was teasing Nangzher Lopo, saying, "All these meditators are prisoners of thoughts; they keep thoughts in a prison and are prison guards! All these intellectuals who debate don't realize they cast a net in the darkness. All these discussions are like a joke and a play, a weapon of words. All the sacred tantras are merely elaborations of one's mind. All these knowledgeable persons are meaningless - they know and have no experience." So he was teasing, saying, "These great views are bubbles of words - all these things are meaningless and make no sense. The real condition cannot be changed. The real essence cannot be practiced. Self-arising wisdom cannot be obscured. When you realize, you cannot re-realize or try to realize again. So what is the matter? Who is complaining?"
Now Nangzher Lopo was getting a bit irritated and realized this was not just a boy, but a special person. He was shocked and could almost not speak. In that moment of shock and surprise, he looked at the young boy who was sitting up in space and that is how we draw him - in space and in the rainbow. So Nangzher Lopo was really sad, realizing all this bad karma he had created by having the wrong view. He did prostrations and confession, realizing the boy was a manifestation of his teacher. Then he requested the teaching. Right at that moment, the owner of all the animals, Yungdrung Gyal, came and saw this discussion. He said, "What are you doing there all this time? Where are all the animals?"
So immediately Nangzher Lopo - who knew Yungdrung Gyal very well - said, "What bad karma we created! You put the master as a servant and I said all these things to him!" Yungdrung Gyal went into shock. Those shocks are good. When you wake up, you are in a different place. So the young boy went up into space and said, "I am Tapihritsa and I came especially for you."
So this is the story. Then Tapihritsa began teaching Yungdrung Gyal and Nangzher Lopo. He said, "Listen carefully and do not be distracted." So both were clearly listening."…..Here is "The Story of Tapihritsa" as told by Yongdzin Tenzin Namdak Rinpoche (excerpted from the edited transcript of his oral teachings translated by Geshe Tenzin Wangyal Rinpoche)……..http://www.kabirkadre.com/study/prose/Tenzin/Tapihritsa.htm

"Ven. Tenzin Namdak are his commentaries on the «Prayer to Ta pi hri tsa» (Ta pi hri tsa’i gsol ‘debs), written in the eight century by Ta pi hri tsa’s disciple Gyer spungs chen po sNang bzher lod po also known as Gyer spungs pa. Ta pi hri tsa is known as the 25th master in the unbroken transmission lineage within the Oral Tradition from Zhang-zhung (Zhang zhung snyan rgyud)……Little is known of his life but it is presumed that he was born sometime in the seventh century in Zhang-zhung. He received the transmission of all four cycles of precepts within the Oral Tradition from the 24th master Tshe sprungs Zla ba rgyal mtshan. He attained the Great Transfer of the Rainbow Body (‘ja’ lus ‘pho ba chen po), leaving no part of his body behind, but manifested miraculously to his later disciples in the form most suitable for the occasion……Gyer spungs pa is an important figure in the history of Oral Tradition, since he was the one who got the permission directly from Ta pi hri tsa, to write down the Dzogchen precepts in the Zhang-zhung language. This then resulted in the wider spread of the teachings, which until then were only spread in an aural manner from the master to a single disciple (gcig brgyud)….."….http://himalaya.socanth.cam.ac.uk/collections/journals/ret/pdf/ret_16_01.pdf………. 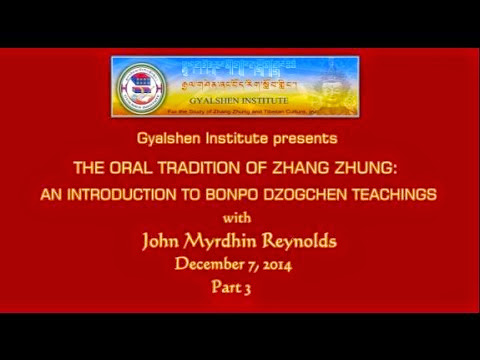