"If Africa was the cradle of mankind, then Central Asia was its nursery," said Wells."….The Journey of Man: A Genetic Odyssey, 2002 (Penguin, UK; Princeton University Press …..By Spencer Wells 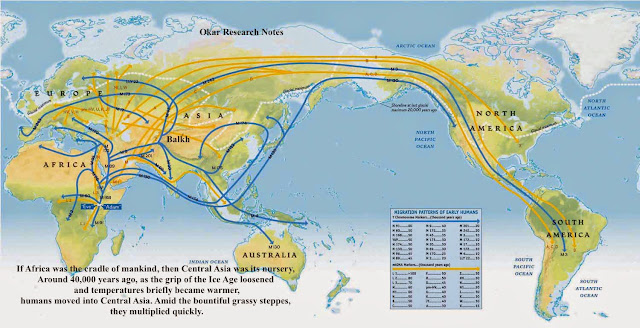 "Wells says a second wave of hominids left Africa around 45,000 years ago, reproduced rapidly, and settled in the Middle East….Around 40,000 years ago, as the grip of the Ice Age loosened and temperatures briefly became warmer, humans moved into Central Asia. Amid the bountiful grassy steppes, they multiplied quickly."…..http://www.onthewing.org/user/Sci_Journey%20of%20Man.pdf

"The Last Glaciation….An Overview of Global Glaciation From 110,000 to 12,500 Years Ago…..The world's most recent glacial period began about 110,000 years ago and ended around 12,500 years ago. The maximum extent of this glacial period was the Last Glacial Maximum (LGM) and it occurred around 20,000 years ago…. most of the world's deserts expanded as they became drier. The American Southwest, Afghanistan, and Iran are exceptions to this rule however as they became wetter once a shift in their air flow patterns took place….Mammoths, mastodons, long-horned bisons, saber toothed cats, and giant ground sloths did live during the last glacial period.…..Human history also began in the Pleistocene and we were heavily impacted by the last glaciation. "

The following figure shows the climatic condition of Eurasia during the ice age maximum..... 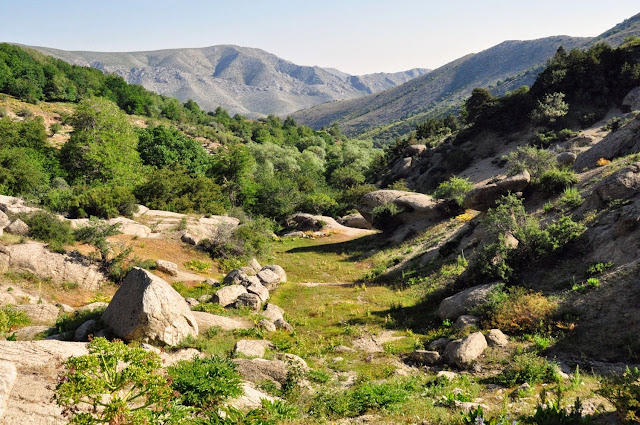 Amankutan Gorge....The shortest path from Bactria to Sogdiana… Amankutan Gorge was used for west – east migration for thousands of years. 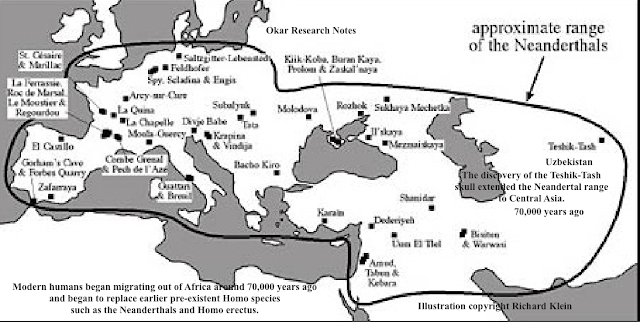 "The vast territory of North and Central Asia represents a poorly understood region in the prehistoric era, despite intensive excavations that have been conducted during the past century. The earliest human occupation in this region probably began sometime around 40,000 years ago. Small groups of big-game hunters likely migrated into this region from lands to the south and southwest, confronting a harsh climate and long, dry winters. By about 20,000 B.C., two principal cultural traditions had developed in Siberia and northeastern Asia: the Mal'ta and the Afontova Gora-Oshurkovo…"……

"The Eurasian Steppe…..Temperate Grasslands of Eurasia: running from Hungary to Manchuria…also called the Steppe or the Steppes, is the vast steppe ecoregion of Eurasia in the Temperate grasslands, savannas, and shrublands Biome. It stretches from Moldavia through Ukraine to Siberia …. The steppe has connected Europe, Central Asia, China, South Asia, and the Middle East economically, politically, and culturally through overland trade routes, most notably the Silk Road during Antiquity and the Middle Ages, and the Eurasian Land Bridge in the modern era"….http://www.iceagecivilizations.com/articles/article01.htm

"…. various Saka groups, Saka being a general term, inhabit the northern plains that stretch from the Dahae lands that lie to the east of the Caspian Sea all the way to Aria (today's Herat Afghanistan), and that between these Saka and the southern kingdoms of Hyrcania (Varkana/Gorgan), Nesaea (Nisa), the plains of the Parthians (plains just north of the Kopet Dag, Bactria (Northern Afghanistan) and Aria lies a great desert that some of the northern predatory Saka tribes crossed by long marches to raid the kingdom along the south of the desert and particularly Varkana, Nisa, and the Parthian plains. The Saka who lived beyond the Jaxartes River (Syr Darya) coincides with Saka Para-Darya, the 'Saka across the river'. The name Aparni* (see above) is found in the Middle Persian Zoroastrian text, the Bundahishn as Aparnak, one of the six male children of the legendary Saka king, paladin and champion of Iran-shahr, Sam, Rustam's grandfather. Aparnak was given over-lordship of the land of Aparshahr derived from Aparnak-shahr. The Aparni were apparently a royal house of the Dahi. ….According to Strabo, the Saka also consisted of:….- Asii, Pasiani, Tochari, and Sacarauli who original came from east of the Jaxartes (Syr Darya) and located presumably between the Oxus (Amu Darya) and Jaxartes (Syr Darya). The name Sacarauli appears to be Saka-rauli. "…..http://www.heritageinstitute.com/zoroastrianism/saka/

"So who were these early Indo-Europeans? We know only a few things about them. ….They were both pastoral and nomadic, being one of the first groups to domesticate the horse, which also gave them a distinct military advantage over their neighbors. The steppes are not particularly productive from a farming standpoint. Horses also provided meat, milk, clothing and transport.….They had discovered the wheel, so they had carts. They worshiped a variety (pantheon) of gods, the preeminent being a 'sky father' and 'earth mother.'….It was a heraldic culture, with heroic poetry and song and a male-based kinship system…The Kurgan hypothesis is favored among most Indo-European scholars; both the archeological and genetic data better support the Urheimat of these early Indo-Europeans as being located on the steppes along the north coast of the Black Sea. "….http://www.genotypediet.com/nomad.shtml

"Genetic evidence has shown that rice originates from a single domestication 8,200–13,500 years ago, in the Pearl River valley region of China…..source of the Greek word is to be sought in Old Iranian words of the types *vrīz- or *vrinj-, but these are ultimately traced back to Indo-Aryan (as in Sanskrit vrīhí-) and subsequently to Dravidian by Witzel and others…..The earliest remains of the grain in the Indian subcontinent have been found in the Indo-Gangetic Plain and date from 7000–6000 BC though the earliest widely accepted date for cultivated rice is placed at around 3000–2500 BC with findings in regions belonging to the Indus Valley Civilization. "