"Shambhu …. (s)ham-(b)hu, sh-am-bhu…. Shambhu is primarily used in the Indian language and its language of origin is Sanskrit. The meaning of the name is benevolent, kind, source of happiness. It is derived from the words 'sham' meaning happiness ; 'bhu' source. This is a name of Shiva in Hindu mythology. The Indian name Sambhav and the Indian name Sambhu are forms of Shambhu……..shaambhavii = related to Shiva who is known as shambhu"....http://www.babynamespedia.com/meaning/Shambhu 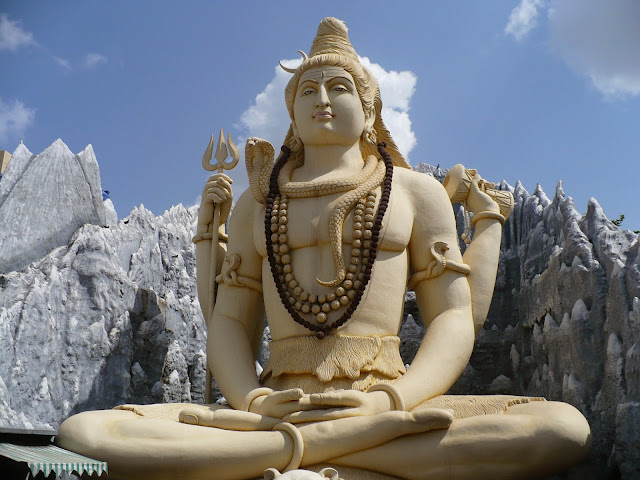 "The other popular names associated with Shiva are Mahadev, Mahesh, Maheshwar, Shankar, Shambhu, Rudra, Har, Trilochan, Devendra (meaning Chief of the Gods) and Trilokinath (meaning Lord of the three realms)…..Shiva as we know him today shares features with the Vedic god Rudra. Historians have also suggested that depiction of Shiva existed in pre-Vedic times, but not all historians agree on this."…http://en.wikipedia.org/wiki/Shiva

"Shiva has a pre-Vedic origin, as his worship cult seems to have been in vogue amongst the Indus dwellers, even around 3000 B. C. The excavations of various archaeological sites in the Indus valley reveal two sets of archaeological finds that suggest the prevalence of the cult of worshipping both, his anthropomorphic as well as symbolic representations. This excavated material includes a number of terracotta seals representing a yogi icon and the phallus type baked clay objects, obviously the votive lings, suggestive of some kind of phallus-worship cult of the non-Aryan settlers of the Indus cities. Seated in meditative posture, the stern looking Yogi figure wears a typical head-dress made of buffalo horns and is surrounded by various animal icons, lion, elephant, buffalo-type bull, rhinoceros etc. and the bird forms above."….http://www.exoticindiaart.com/article/lordshiva/

"The Vedas, in their later cult, admit into Vedic pantheon the jatadhari holy Shiva with all his manifestations, namely the bow and arrows carrying archer Sharva, the all pervading Bhava, the benevolent Shambhu and the animal-skin wearer Krittivasanah, but do not approve his phallus worship."….http://www.exoticindiaart.com/article/lordshiva/

"Shiva had a pre-Vedic origin….a God like him was the presiding deity of the Indus inhabitants and he was worshipped as both, iconically as well as symbolically, that is, as Pashupati and Mahayogi and as Ling….This seems to the initial form of Shiva. Maybe the Indus inhabitants shared their god with West Asian settlers who worshipped a similar god Teshav. Teshav, too, was a bull riding deity like Vrishvaha Shiva. He also carried, like Shiva, a trident, pinakin, the bow, arrows, which shot as lightening, danda, the rod, parashu, the axe, and so on. Incidentally, Teshav's consort was also named Maa and was worshipped as Jaganmata, that is, the world mother. Her name so much corresponds with Shiva's consort Uma who too is worshipped as Jagat-janani, the mother of the world. Jaganmata sounds so much like Indus Mother Goddess. Both, Shiva's consort Uma and Teshav's consort Maa rode a lion. …..Rudra-Shiva had some kind of genetic relationship with various gods whose images have been recovered from Anatolia, Mesopotamia and Indus Valley."….Danielou, Alain. Gods of Love and Ecstasy (The Traditions of Shiva and Dionysus): Vermont, 1992.....http://www.exoticindiaart.com/articleprint/lordshiva

Jaganmata….most comprehensive character as the great Power (Sakti) of Nature, the one Mother of the Universe (Jagan-mata, ]agad-amba)…she is Uma, 'light,' and a type of beauty ; Gauri, - ' the yellow or brilliant ; ' Parvati, ' the mountaineer ; ' and Haimavati, from her parentage ; Jagan-mata,….A Classical Dictionary of Hindu Mythology By John Dowson

"Arrogant Jalandara challenged Shiva to hand him over his consort and in the process became victim of Shiva's wrath and got killed. Something of the similar kind happened in the case of Ravana, the king of Lanka. Pleased by his penance Shiva blessed him with the boon of immortality. This bred in Ravana vanity and arrogance. This vain and arrogant Lanka ruler wished to have Mount Kailash, the abode of Shiva, shifted to Lanka. He went to Kailash and to uproot it began shaking it. His act of uprooting it sent tremors across the Mountain. Shiva perceived Ravana's arrogance and was annoyed. To punish Ravana he pressed the Mountain by the thumb of his foot…."…..http://www.exoticindiaart.com/article/lordshiva/

".....does shama also mean peace as shanti does? Why we say Om Shanti and not Om Shama?…..Re: sanskrit: shama/shanti…..Both the words are derived from the same verbal root sham which means 'to be or become calm'. A person who has attained shama is referred to in one of the upaniShads as shAnta. So both the words mean the same."….. http://www.indiadivine.org/audarya/advaita-vedanta/531431-aw-sanskrit-shama-shanti.html 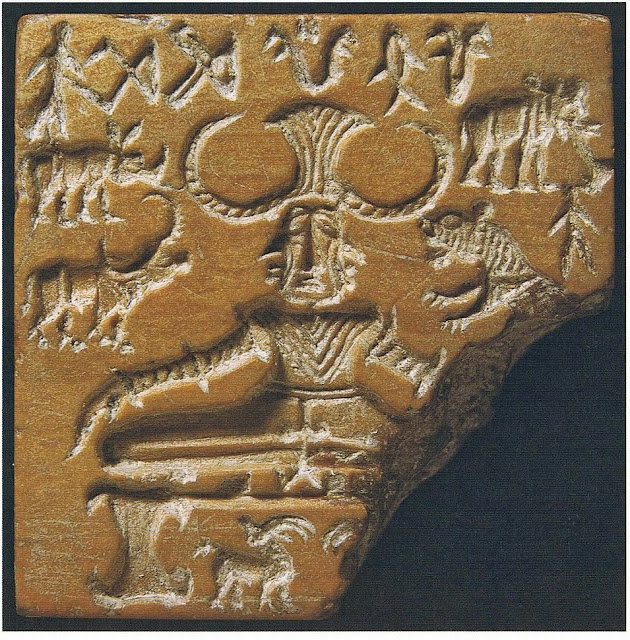 "It is quite well understood that the worship of Siva as a ‘Linga’ has a long history. But, Siva in his sitting posture, with the crescent on his matted hair, tiger-skin covering his loin, trident on his right-hand, is comparatively new. The first image of a Yogi, wearing buffalo-horns as his head-gear, sitting in a straight posture, ithyphallic – ‘unencumbered by a loin cloth’ is where we start from. This image ( see below) is from Harappa and probably dates back to BC. Was he a god of Fertility? Was he a Lord of animals – a ‘Pasupati’ among the non-Aryan gods? There is no answer yet."…..http://przmm.blogspot.com/2010/07/siva-icon.html

"The great goddess of the Hindus: Mahadevi. The consort of Shiva, she is worshipped in a variety of forms corresponding to her two aspects—benevolence and fierceness. She is Uma, ‘light’; Gauri, ‘yellow or brilliant’; Parvati, ‘the mountaineer’; and Jaganmata, ‘the mother of the world’ in her milder guise. The terrible emanations are Durga, ‘the inaccessible’; Kali, ‘the black’; Chandi, ‘the fierce’; and Bhairavi, ‘the terrible’….The first appearance of the great goddess was as Durga, a beautiful warrior maid of yellow hue, seated on a tiger."….Oxford Dictionary of World Mythology: Devi

" Shiva also has many benevolent and fearsome forms. In benevolent aspects, he is depicted as an omniscient Yogi who lives an ascetic life on Mount Kailash...…..http://en.wikipedia.org/wiki/Shiva

"Your lingam which resides in pinewood forest, is called Shambhu-lingam शंभु लिंगम्. So you are known as Shambhu…..The lingam (also, linga, ling, Shiva linga, Shiv ling, Sanskrit लिङ्गं, liṅgaṃ, meaning "mark", "sign", "inference" or is a representation of the deity Shiva used for worship in temples. The lingam is often represented alongside the yoni, a symbol of the goddess or of Shakti, female creative energy. The union of lingam and yoni represents the "indivisible two-in-oneness of male and female, the passive space and active time from which all life originates". The lingam and the yoni have been interpreted as the male and female sexual organs since the end of the 19th century by some western scholars, while to practising Hindus they stand for the inseparability of the male and female principles and the totality of creation.'……http://en.wikipedia.org/wiki/Lingam