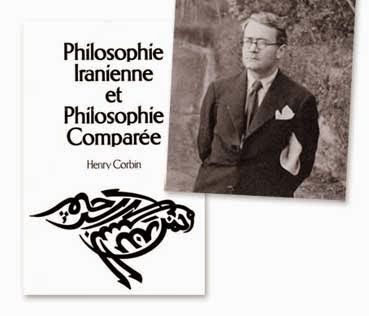 "Henry Corbin (14 April 1903 – 7 October 1978) was a philosopher, theologian and professor of Islamic Studies at the Sorbonne in Paris, France. Corbin was born in Paris in April 1903. As a boy he revealed the profound sensitivity to music so evident in his work. Although he was Protestant by birth, he was educated in the Catholic tradition and at the age of 19 received a certificate in Scholastic philosophy from the Catholic Institute of Paris. Three years later he took his "licence de philosophie" under the great Thomist Étienne Gilson. In 1928 he encountered the formidable Louis Massignon, director of Islamic studies at the Sorbonne, and it was he who introduced Corbin to the writings of Suhrawardi, the 12th century Persian mystic and philosopher whose work was to profoundly affect the course of Corbin’s life. The stage was then set for a personal drama that has deep significance for understanding those cultures whose roots lie in both ancient Greece and in the prophetic religions of the Near East reaching all the way back to Zoroaster. Years later Corbin said “through my meeting with Suhrawardi, my spiritual destiny for the passage through this world was sealed. Platonism, expressed in terms of the Zoroastrian angelology of ancient Persia, illuminated the path that I was seeking.”….http://en.wikipedia.org/wiki/Henry_Corbin

"The struggle to speak a language adequate to the reality of “the angelic function of beings” requires guarding against the dangers of abstraction and the dogmas that accompany it. Such an effort could help us to live in what Corbin called a realized eschatology: that is, to live the reality of the Last Things right now. Corbin relates a conversation with the great scholar of Zen Buddhism D. T. Suzuki in Ascona in 1954: "we asked him what homologies in structure he found between Mahayana Buddhism and the cosmology of Swedenborg in respect of the symbolism and correspondences of worlds: I can still see Suzuki suddenly brandishing a spoon and saying with a smile ‘This spoon now exists in Paradise... We are now in Heaven…’ This was an authentically Zen way of answering the question. Ibn 'Arabi would have relished it." …..http://henrycorbinproject.blogspot.com/2008_06_01_archive.html

ZEN AND SWEDENBORG……"While meeting with two renowned scholars of religion Henry Corbin and Mircea Eliade in 1954, Suzuki was asked what similarities he found between Mahayana Buddhism and the theology of Swedenborg. According to Corbin, Suzuki grabbed a spoon and said suddenly, "This spoon now exists in Paradise...." He later added, " We are now in Heaven."….http://www.quantuminteractive.net/quantuminteractive/sd/swedenborg/who-was-swedenborg/swedenborg-influence-on-suzuki.htm

"Realized eschatology is a Christian eschatological theory popularized by C. H. Dodd (1884–1973) that holds that the eschatological passages in the New Testament do not refer to the future….Eschatology is therefore, not the end of the world but its rebirth….Those holding this view generally dismiss "end times" theories, believing them to be irrelevant…. it reverses the notion of Jesus' second coming as an apocalyptic event…..Instead, eschatology should be about being engaged in the process of becoming, rather than waiting for external and unknown forces to bring about destruction."…..http://en.wikipedia.org/wiki/Realized_eschatology

"Henry Corbin (1903-1978) was a scholar, philosopher and theologian. He was a champion of the transformative power of the Imagination and of the transcendent reality of the individual in a world threatened by totalitarianisms of all kinds. One of the 20th century’s most prolific scholars of Islamic mysticism, Corbin was Professor of Islam & Islamic Philosophy at the Sorbonne in Paris and at the University of Teheran. He was a major figure at the Eranos Conferences in Switzerland. He introduced the concept of the mundus imaginalis into contemporary thought. His work has provided a foundation for archetypal psychology as developed by James Hillman and influenced countless poets and artists worldwide. But Corbin’s central project was to provide a framework for understanding the unity of the religions of the Book: Judaism, Christianity and Islam. His great work Alone with the Alone: Creative Imagination in the Sufism of Ibn ‘Arabi is a classic initiatory text of visionary spirituality that transcends the tragic divisions among the three great monotheisms. Corbin’s life was devoted to the struggle to free the religious imagination from fundamentalisms of every kind. His work marks a watershed in our understanding of the religions of the West and makes a profound contribution to the study of the place of the imagination in human life."…..http://henrycorbinproject.blogspot.com/2008_06_01_archive.html

"In the 1930's Jung pursued "the phenomenology of the self" into a lengthy study of alchemy, which he took to be a culturally wide-spread and psychologically naïve pursuit of individuation. Again he appealed to the myth of the Sun Hero to make sense of alchemy (CW 12, ¶ 437-441). But he also gained a new perspective. The alchemists were no less aware that the spirit could speak out of matter than were the pre-literate peoples who say, "He has gone into the forest to talk with the spirits." Jung particularly favored the formulation of Gerhard Dorn, one of his favorite alchemists, who spoke of living in the unus mundus, the "one world" in which empirical events and spiritual vision are not separate (CW 14, ¶ 759-775). It also has a parallel in the Islamic legends of Khidr, who journeyed along the barzakh, the isthmus between the empirical world and the mundus imaginalis, the imaginal world (cf. Corbin, 1969; 1981; and Wilson, 1993: 139-146). It is the unitary world in which "outer" and "inner" reflect and symbolize one another."…….http://www.jrhaule.net/Chan.html……

"Henry Corbin saw the seminal significance of Swedenborg, who he went so far as to describe as 'the Buddha of the West."….Golgonooza, City of Imagination: Last Studies in William Blake…….By Kathleen Raine