"With the rise of critical history, Troy and the Trojan War were, for a long time, consigned to the realms of legend. However, the true location of ancient Troy had from classical times remained the subject of interest and speculation, so when, in 1822, the Scottish journalist Charles Maclaren reviewed the available material, he was able to identify with confidence the position of the acropolis of Augustus's New Ilium in north-western Anatolia……In 1866, Frank Calvert, the brother of the United States' consular agent in the region, made extensive surveys and published in scholarly journals his identification of the hill of New Ilium (which was on farmland owned by his family) as the site of ancient Troy. The hill, near the city of Çanakkale, was known to the Turks as Hisarlık."…http://en.wikipedia.org/wiki/Troy 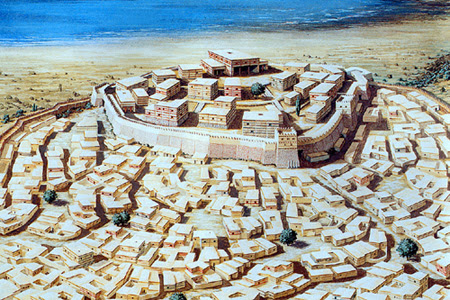 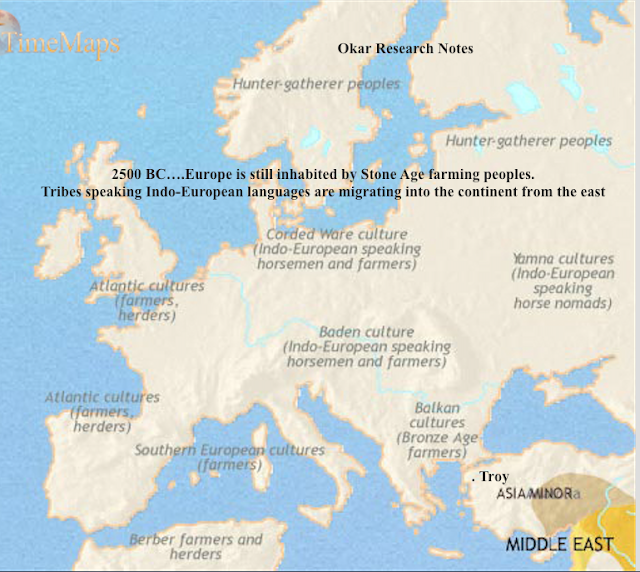 "Balkh was old long before Alexander’s raid, reached its height about 2500 BC, and its history of 5000 years records more than a score of conquerors. The Arabs, impressed by Balkh’s wealth and antiquity, called it Umm-al-belad, the mother of all cities. When the Silk Road was the chief artery of commerce between East and West, Balkh was second to none......A large and prosperous city of mud brick some three square miles in area, it held perhaps 200,000 persons. It was surrounded by mud-brick walls pierced by seven gates."......http://depts.washington.edu/silkroad/cities/afghanistan/balkh.html 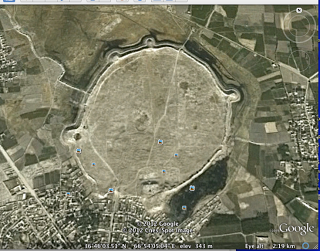 "Heinrich Schliemann (German: 1822 – 1890) was a German businessman and a pioneer of field archaeology. He was an advocate of the historical reality of places mentioned in the works of Homer. Schliemann was an archaeological excavator of Hissarlik, now presumed to be the site of Troy, along with the Mycenaean sites Mycenae and Tiryns. His work lent weight to the idea that Homer's Iliad and Virgil's Aeneid reflect actual historical events….Schliemann, defying the ridicule of the learned world, actually unearths the remains of the ancient city of Troy. "….http://en.wikipedia.org/wiki/Heinrich_Schliemann

"Troy (Ancient Greek: Ἴλιον, Ilion, or Ἴλιος, Ilios; and Τροία, Troia; Latin: Trōia and Īlium; Hittite: Wilusa or Truwisa; Turkish: Truva) was a city, both factual and legendary, in northwest Anatolia in what is now Turkey, south of the southwest end of the Dardanelles / Hellespont and northwest of Mount Ida. It is best known for being the setting of the Trojan War described in the Greek Epic Cycle and especially in the Iliad, one of the two epic poems attributed to Homer. Metrical evidence from the Iliad and the Odyssey seems to show that the name Ἴλιον (Ilion) formerly began with a digamma: Ϝίλιον (Wilion). This was later supported by the Hittite form Wilusa."…http://en.wikipedia.org/wiki/Troy

"Besides the Iliad, there are references to Troy in the other major work attributed to Homer, the Odyssey, as well as in other ancient Greek literature (like Aeschylus' Oresteia). The Homeric legend of Troy was elaborated by the Roman poet Virgil in his Aeneid. The Greeks and Romans took for a fact the historicity of the Trojan War and the identity of Homeric Troy with the site in Anatolia. Alexander the Great, for example, visited the site in 334 BC and made sacrifices at tombs there associated with the Homeric heroes Achilles and Patroclus…. in Homer's Iliad, Patroclus, or Patroklos (Ancient Greek: Πάτροκλος Patroklos “glory of the father”), was the son of Menoetius, grandson of Actor, King of Opus, and was Achilles' beloved comrade and brother-in-arms."…http://en.wikipedia.org/wiki/Patroclus

Troy I…. 3000–2600 BC ….The first city on the site was founded in the 3rd millennium BC. During the Bronze Age, the site seems to have been a flourishing mercantile city, since its location allowed for complete control of the Dardanelles, through which every merchant ship from the Aegean Sea heading for the Black Sea had to pass. Around 1900 BC a mass migration was set off by the Hittites to the east. Cities to the east of Troy were destroyed, and although Troy was not burned, the next period shows a change of culture indicating a new people had taken over Troy….Initial settlement of the early bronze age. Construction material: sun - dried bricks. (adobe) 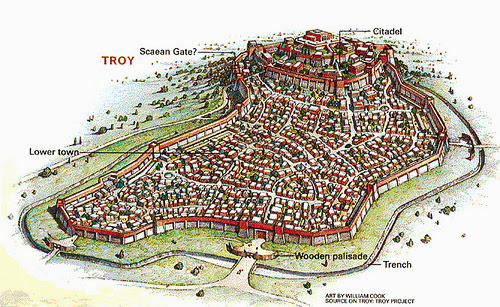 Troy II ……2600–2250 BC …When Schliemann came across Troy II, in 1871, he believed he had found Homer's city. Schliemann and his team unearthed a large feature he dubbed the Scaean Gate, a western gate unlike the three previously found leading to the Pergamos. This gate, as he describes, was the gate that Homer had featured. As Schliemann states in his publication Troja: "I have proved that in a remote antiquity there was in the plain of Troy a large city, destroyed of old by a fearful catastrophe, which had on the hill of Hisarlık only its Acropolis with its temples and a few other large edifices, southerly, and westerly direction on the site of the later Ilium; and that, consequently, this city answers perfectly to the Homeric description of the sacred site of Ilios."


Troy VI: 17th–15th centuries BC…Troy VI was destroyed around 1250 BC, probably by an earthquake. Only a single arrowhead was found in this layer, and no remains of bodies. However the town quickly recovered and was rebuilt in a layout that was more orderly.

Troy VIIa: c. 1300–1190 BC, most likely setting for Homer's story[…Troy VII, which has been dated to the mid-to-late-13th century BC, is the most often cited candidate for the Troy of Homer. It appears to have been destroyed by war. The evidence of fire and slaughter around 1184 BC, which brought Troy VIIa to a close, led to this phase being identified with the city besieged by the Greeks during the Trojan War. This was immortalized in the Iliad written by Homer….Ancient Greek historians variously placed the Trojan War in the 12th, 13th, or 14th centuries BC: Eratosthenes to 1184 BC, Herodotus to 1250 BC, Duris of Samos to 1334 BC. Modern archaeologists associate Homeric Troy with archaeological Troy VII.


Troy VIII: c. 700–85 BC.. In May 334 Alexander the Great crossed the Hellespont and came to the city, where he visited the temple of Athena Ilias, made sacrifices at the tombs of the Homeric heroes, and made the city free and exempt from taxes.[37] According to the so-called 'Last Plans' of Alexander which became known after his death in June 323, he had planned to rebuild the temple of Athena Ilias on a scale that would have surpassed every other temple in the known world. 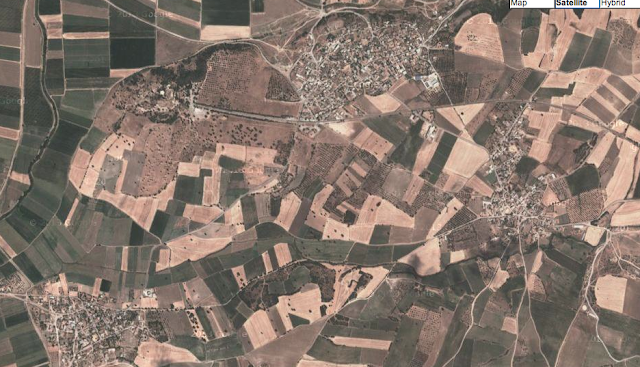