"Shenlha Okar is depicted with a white body "like the essence of crystal"…..The Bon Religion of Tibet: The Iconography of a Living Tradition by Per Kvaerne. Shambhala Publications, 2001. ISBN 1-57062-186-1 pg. 26) 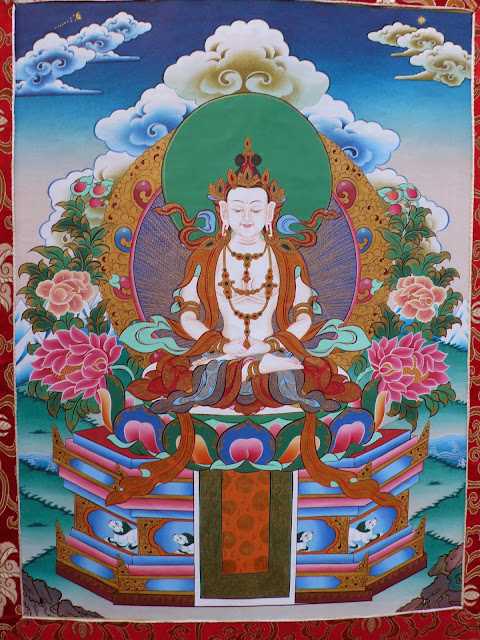 "Jalaluddin Rumi: "O love, O pure deep love, be here, be now! Be all; worlds dissolve into your stainless endless radiance" …..Sogyal Rinpoche, in his work The Tibetan Book of Living and Dying (1992,page 364),

"From the perspective of Dzogchen, the ultimate nature of all sentient beings is said to be pure, all-encompassing, primordial clarity or naturally occurring timeless clarity. This intrinsic clarity has no form of its own and yet is capable of perceiving, experiencing, reflecting, or expressing all form. It does so without being affected by those forms in any ultimate, permanent way. The analogy given by Dzogchen masters is that one's nature is like a mirror which reflects with complete openness but is not affected by the reflections, or like a crystal ball that takes on the colour of the material on which it is placed without itself being changed. The knowledge that ensues from recognizing this mirror-like clarity (which cannot be found by searching nor identified) is what Dzogchenpas refer to as rigpa."….Namdak, Tenzin. Bonpo Dzogchen Teachings. Vajra Publications 2006, page 97.

"Like Dzogchen, Sufism uses exquisitely rich metaphors which Dzogchen practitioners may find both beautiful and insightful as they study the View. Through a sample of the ecstatic poetry from Fakhruddin 'Araqi's work, Divine Flashes (Lama'at), we hope such an opportunity is afforded. Both Dzogchen and Sufism are diamond-like Wisdom Teachings grounded in the Radical Primordial Reality. The goal of Sufism is to become the perfect mirror of the Formless through the purification of the heart."….http://www.buddhanet.net/mag_one.htm 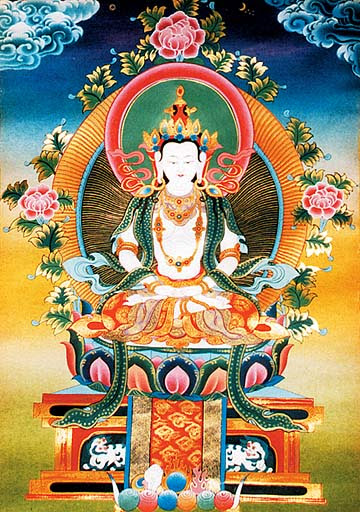 "In terms of energy – there are three characteristic ways in which the energy manifests – Dang, Rolpa, and rTsal (gDang, rol pa, and rTsal). Dang is the energy in which ‘internal’ and ‘external’ are not divided from that which manifests. It is symbolised by the crystal sphere which becomes the colour of whatever it is placed upon. Rolpa is the energy which manifests internally as vision. It is symbolised by the mirror. The image of the reflection always appears as if it is inside the mirror. rTsal is externally manifested energy which radiates. It is symbolised by the refractive capacity of the faceted crystal. For a realised being, this energy is inseparable in its manifestation from the dimension of manifest reality. Dang, Rolpa, and rTsal are not divided."….http://aroencyclopaedia.org/shared/text/d/dzogchen_ar_kdt_eng.php 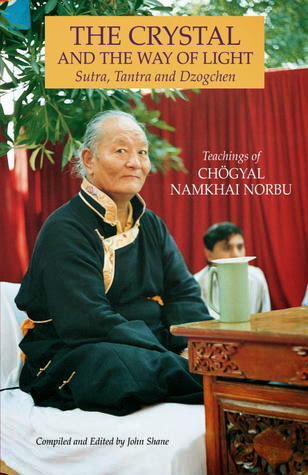 "The metaphor of a crystal prism is used, the crystal prisms diffracting pure colorless light as the five rainbow rays of color. The radiance manifests as the 5 Buddha families to use the Buddhist functional metaphor, which manifest as the five elements, which manifest and configure the world, the luminous world of flesh."…..http://transmissiononline.org/issue/the-awareness-of-awareness/article/the-magical-realism-of-dzogchen-as-expressed-in-the-unceasing-experience-of-spontaneity

Chögyal Namkhai Norbu, The Essence of the Three Statements of Garab Dorje: Based on an Oral Advice given by Khyenrab Chökyi Özer, pp.39-57, 66-70

"Shenlha Ökar (Wylie: gshen lha 'od dkar) or Shiwa Ökar (Wylie: zhi ba 'od dkar) is the most important deity in the Yungdrung Bon tradition of Tibet. He is counted among the "Four Transcendent Lords" (Wylie: bde bar gshegs pa) along with Satrig Ersang (Sherab Chamma), Sangpo Bumtri, and Tonpa Shenrab Miwoche....Shenlha Ökar means "wisdom gshen of white light;" the variant Shiwa Okar means "peaceful white light." The Bon term gShen can mean "priest or shaman" or possibly in this case "deity who is a priest." In some accounts he is considered the sambhogakāya form of Tonpa Shenrab Miwoche, the founder of Bon (the nirmāṇakāya aspect). In other accounts, he is visited by Shenrab Miwoche when Miwoche is in a prior incarnation known as Salwa. Additionally, some categorize him as "corresponding exactly to the Buddhist category of dharmakāya." Shenlha Okar is said to have created the world with the help of nine brother gods or nine cosmic gods (Wylie: srid pa'i lha) who appear as war gods or drala (Wylie: dgra bla). He is also considered a god of compassion with many parallels to Avalokiteśvara and also with Amitābha.".... The Bon Religion of Tibet: The Iconography of a Living Tradition by Per Kvaerne. Shambhala Publications, 2001. ISBN 1-57062-186-1 pg. 25)

"Shiwa Okar in the terma of Chögyam Trungpa Rinpoche......Shiwa Okar on white horse, holding mirror & spear with a white flag; painting by thangka painter Greg Smith....Shiwa Okar featured in a work composed by the influential Tibetan Buddhist lama Chögyam Trungpa, particularly a long verse epic composed in Tibet called The Golden Dot: The Epic of the Lha, the Annals of the Kingdom of Shambhala, and in terma he revealed beginning in 1976. The Golden Dot was lost in Trungpa Rinpoche's flight from Tibet in 1959....."Trungpa Rinpoche began to reconstruct the original text after escaping Tibet, and it is this later work to which we refer. The first chapter describes the creation of the world by nine cosmic gods (shrid[sic] pa 'i lha) who appear in the form of native Tibetan deities known as drala (dgra bla), or war gods. These gods represent primal or originary aspects of the phenomenal world. For example, one of these lha stood for all kinds of light. Glancing in many directions, this deity created all of the lights existing in the world, including the sun, the moon, the light of the planets and stars, and the inward luminosity of consciousness itself. Another represented space and the sense of direction ... In Trungpa Rinpoche's epic these were directed by a ninth lha called Shiwa Okar ... a sort of absolute principle behind creation and the nature of reality. After these nine cosmic deities have created the world, [Shiwa Okar] goes to the things they have created and invests each one with an animistic spirit, a drala.”.....Kornman notes that one of the "striking things" about the text is that it refers not to Indic sources but to the "creation myths found in the royal chronicles and in the Epic of Gesar of Ling" and "evoke the cosmology of native Tibetan religion, not Buddhism." His Shambhala terma feature Shiwa Okar as an iṣṭhadevatā (Wylie: yi dam) "meditational deity", with a tantric retinue of drala and werma (Wylie: wer ma)"..... "The Influence of the Epic of King Gesar of Ling on Chogyam Trungpa" by Robin Kornman. in Recalling Chogyam Trungpa, ed. Midal. Shambhala Publications, 2005. ISBN 1-59030-207-9 pg. 363-364 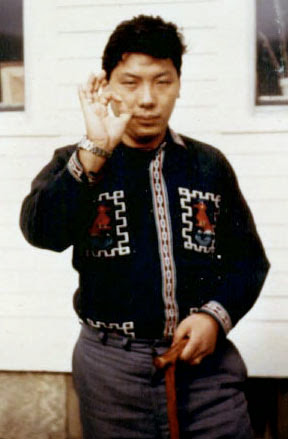 "Trungpa Rinpoche's work has antecedents in the edition of the Gesar epic prepared by Jamgon Ju Mipham Gyatso and ritual practices he composed in conjunction with that work. Kornman notes "Mipham made his edition of the Gesar Epic a hybrid of Buddhist and local ideas. He made sure it would be read in this manner by writing a parallel set of Gesar chants that mix religions in the same way. These ritual practices may be found in the Na chapter of his collected works. In the Bon tradition, King Gesar of Ling is sent to Tibet by Shenlha Okar, and Trungpa Rinpoche's blending of native traditions and Indian Buddhism appears to echo Mipham's."...."The Influence of the Epic of King Gesar of Ling on Chogyam Trungpa" by Robin Kornman. 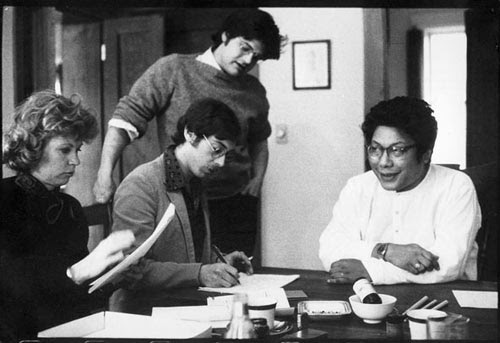