"Whose beloved are You" I asked,
"O You who are so unbearably beautiful?"
"My own," He replied, "for I am One and Alone
love, lover, and beloved - mirror, beauty and the very eyes that see."

"Fakhruddin 'Araqi's work, Divine Flashes (Lama'at)…..Both Dzogchen and Sufism are diamond-like Wisdom Teachings grounded in the Radical Primordial Reality. The goal of Sufism is to become the perfect mirror of the Formless through the purification of the heart. "In Sufism, as in most other authentic traditions, it is possible to become aware of the metaphysical transparency of forms and to be able to contemplate the One in the multifaceted manifold."….http://www.buddhanet.net/mag_one.htm 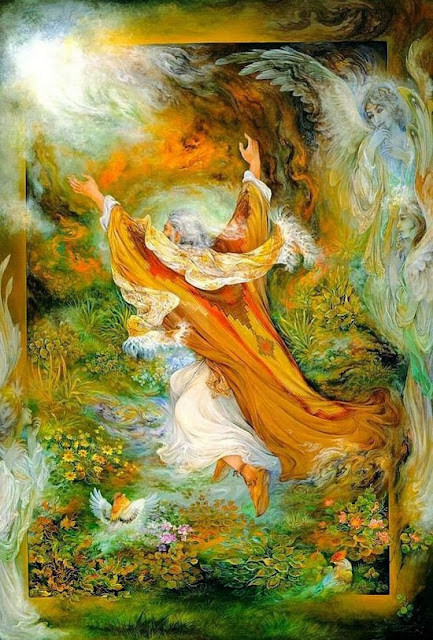 "Fakhr al-dīn Ibrahīm ‘Irāqī (Persian: فخرالدین ابراهیم عراقی‎; 10 June 1213 – 1289), Persian Sufi master, poet and writer….He is known by many Sufis as a commenter on Sufi teachings, one of the great Persian poets, and an artist. ‘Iraqi is also considered to have reached an exalted station of spiritual realization within the Sufi tradition…‘Iraqi was both a member of the school of Persian Sufi poetry but also has been identified with the Ibn Arabian school of Sufism. However, ‘Iraqi was also a Gnostic who often spoke in the language of love. For him, as well as many other Sufis, love was realized knowledge. ‘Iraqi's writing Lama’at (Divine Flashes) fits into a genre of Sufi writings which expresses certain doctrines in the language of love….. 'Iraqi often listened to Rumi teach and recite poetry, and later attended Rumi's funeral."….http://en.wikipedia.org/wiki/Fakhr-al-Din_Iraqi

"Fakhruddin 'Araqi was contemporary with other giants of Sufism such as Ibn 'Arabi, Jalaluddin Rumi and Sadruddin Qunawi, men whose teachings dominate Sufi spirituality to this day. He himself was a leading light in a period so luminous that its brilliance still dazzles the eye some seven centuries later."

'Araqi was a Gnostic who spoke the language of love. For him, as for Sufism in general, love is not juxtaposed to knowledge. It is realised knowledge. The Truth, which is like a crystal or a shining star in the mind, becomes wine when it is lived and realised. It inundates the whole of man's being, plucking the roots of his profane consciousness from this world of impermanence and bringing about an inebriation that must of necessity result from the contact between the heart of man and the Infinite... Thus 'Araqi sees the phenomenal world not as a veil but rather as a mirror reflecting the infinite noble qualities and possibilities of Radiant Perfect Being."…….http://www.mysticsaint.info/2009/11/fakhruddin-iraqi-divine-flashes-lamaat.html

"The Divine Flashes is especially beautiful as it intersperses poetry with lyrical prose, often with the former an ecstatic rendering of the latter. Furthermore, there is a sense in which the Divine Flashes is a union of the Western and Eastern Schools of Sufism. The Divine Flashes was inspired by one of Ibn 'Arabi's major works The Bezels of Wisdom. Born in Spain, Ibn 'Arabi is considered by many Sufis to be the greatest of all Masters and his writings are revered as great."

"Lama’at or Divine Flashes is the best known of ‘Iraqi's writings and was written during his time in what is now present day Turkey. A part of the ‘language of love’ genre within Sufi writing, it takes an interesting view on how one view the world. Unlike others before him ‘Iraqi viewed the world as a mirror which reflected God's Names and Qualities and not as a "veil" which must be lifted. "…..http://en.wikipedia.org/wiki/Fakhr-al-Din_Iraqi

….. "the mysteries of Union" ……The journey to God takes place within the heart, and for centuries Sufis have been traveling deep within themselves, into the secret chamber of the heart where lover and Beloved share the ecstasy of union…..The Kamal Posh recognized that Muhammad knew the mysteries of the heart….. the Kamal Posh became the mystical element of Islam. And later these wayfarers became known as Sufis, perhaps in reference to the white woolen blanket, sûf, which they wore, or as an indication of their purity of heart, safâ, for they were also known as the pure of heart."…..http://www.goldensufi.org/a_meditation_of_heart.html

"I gaze at the mirror which reveals my beauty
and see the universe but an image of that image.
In the paradise of theophany I am the Sun: marvel not
that every atom becomes a vehicle of my manifestation."


"Ibn 'Arabî's mystical teaching is expressed by the term wahdat al-wujûd, unity of being. Ibn 'Arabî replaced the idea of a personal God with a philosophical concept of Oneness. ….When you know yourself, your "I-ness" vanishes and you know that you and God are one and the same."….Fanâ , the loss of one's "I-ness," is a state of realizing one's essential oneness with God.

"Different Sufi paths use different meditation techniques. One pratice developed by the Naqshbandi order uses the energy of love to go beyond the mind. ….Rather than attempting to still one's thoughts by focusing on the mind, through focusing on the heart and the feeling of love within the heart one leaves the mind behind. Thought-forms slowly die and our emotions are also stilled…. it is possible in Sufi spirituality, as in most other authentic traditions, to become aware of the metaphysical transparency of forms and to be able to contemplate the One in the multifaceted manifold.."…..http://www.goldensufi.org/a_meditation_of_heart.html

"In Islamic thought, the traditional authorities speak of "transcendence" (tanzih) and "immanence" (tashbih), or the "negative" and "positive" ways, of which the second corresponds more to the perceptive of 'Iraqi. He and Sufis like him see the phenomenal world not as the "veil", but rather as the mirror reflecting God's Names and Qualities, or as a symbol of the spiritual world. For them beauty is not the cause of seduction, but the occasion for recollection of the spiritual archetypes in Platonic sense."…..http://www.mysticsaint.info/2009/11/fakhruddin-iraqi-divine-flashes-lamaat.html

"…..Fanaa (Arabic: فناء‎ fanāʾ ) is the Sufi term for "dissolution" or "annihilation" (of the self) or Muraqaba.It means to dissolve the ego self, while remaining physically alive. Persons having entered this enlightenment state obtain awareness of the intrinsic unity (Tawhid) between Allah and all that exists, including the individual's mind. It is coupled conceptually with baqaa, subsistence, which is the state of pure consciousness of and abidance in God…..The word appears once in the Qurʾān. “Everyone upon the earth will perish (fānin), and there will remain (yabqá) the Face of your Lord, Owner of Majesty and Honor. So which of the favors of your Lord would you deny?” (Surat al-Rahman)"…..http://en.wikipedia.org/wiki/Fana_(Sufism)