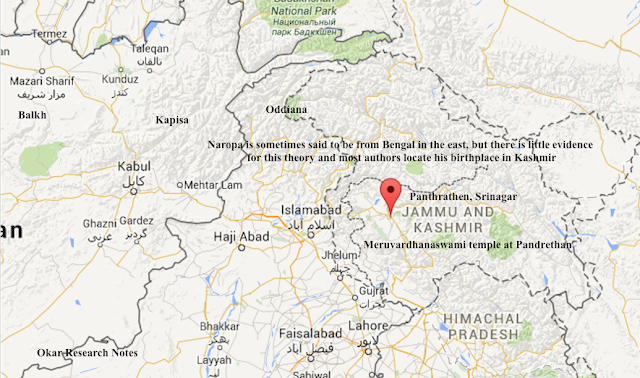 "These are the great Tilopa’s oral instructions. On the completion of the twelve hardships, Tilopa taught these on the banks of the river Ganges to the Kashmiri pandit, the wise and learned Naropa. Naropa taught The Twenty-Eight Vajra Verses to the great interpreter, the king of translators, Marpa Chökyi Lodrö. Marpa finalized his translation at Pulahari in the north of India. Ken McLeod translated this into English in Los Angeles in the southwest of the United States, working from the efforts of previous translators and various commentaries."….http://www.naturalawareness.net/ganges.html

"According to 'The Wand that Opens the Eyes and Dispels the Darkness of Mind' (the abridged collection of biographies of the successive Gyalwang Drukpas), Naropa was born around AD 956 and passed away around AD 1050. However, other sources record him as living between AD 1016 and 1100. Naropa was born in the small kingdom of Bengal. His father was a royal chieftain of an area named Shantivarman and his mother was called Srimati. His yearning for spiritual development was so strong that, when he was eight years old, he journeyed to Kashmir (one of the main seats for Buddhist studies in historical times) in order to study with the master Gaganakirti. It was from Gaganakirti that he received his lay ordination….Niguma became one of Naropa's most advanced disciples and a devoted spiritual companion; she served Naropa when he lived in Pullahari, Kashmir….After his stay in Pullahari, Naropa went to Nalanda University, where his wisdom, oratory skills and spiritual understanding earned him the chancellorship of the university."….http://www.drukpa.com/

"Naropa was born into a noble family of Pullahari, in Kashmir, in 1016 AD. We are told that he was originally named Samantabhadra. He was raised as an aristocrat, with the intention that he would inherit the position of his father as a major ruler and leader of the people….According to the story of Naropa's life, he deserted home and went to the main monastery of Kashmir for ordination. There he was ordained as a novice monk (sramanera) in the Sarvastivada order of Buddhism and engaged himself in scholastic studies for the next three years. Kashmir, at this time in history, was famous as a place of great learning and science….After his Enlightenment, Naropa returned to Pullahari. It is said that his former wife became a great Yogini there, while following Naropa's guidance. She is famous as the Yogini Niguma and in many treatises is referred to as Naropa's sister."….http://www.dharmafellowship.org/biographies/historicalsaints/mahasiddha-sri-naropa.htm

"…Naropa journeyed to Kashmir to study with the master Arya Akasha and received the lay ordination…..Naropa took the vows of a novice monk at the Happy Garden Monastery and was subsequently fully ordained in Kashmir. Thereafter, he stayed in Pullahari Monastery to continue his learning and practice…."….http://www.drukpa.org

"The fascinating new book Naropa explains the underlying philosophy of Buddhism and its relevance today as a religion without a god or prophet, but rather a belief in self-reliance. The story takes place in the eleventh century, when India was subject to Turkish Muslim attack on the Indian Gangetic plain, in Kashmir, and in the Himalayan region. Naropa is a Kashmir Brahmin and the abbot of Nalanda University. During a strange mystical experience, a hideous dakini informs him that his comprehension is only intellectual, and if he wants real insight, he should meet Tilopa. Following this advice, Naropa abandons his university post and searches for the Mahasiddha Tilopa. It is not easy to find the Brahmin Tilopa, as he possesses miraculous powers, and never stays long in the same place. But Naropa finally locates him. After twelve years of arduous training, Naropa gains Enlightenment, and in turn, imparts his transcendent wisdom to Marpa, the Tibetan. Though Nalanda, Vikramashila, and other Buddhist monasteries are destroyed in the Turkish Islamic invasion, Naropa's teachings survive in the Tibetan translations made by Marpa, Milarepa, and Gampopa"…..Naropa…. by Satyananda Giri 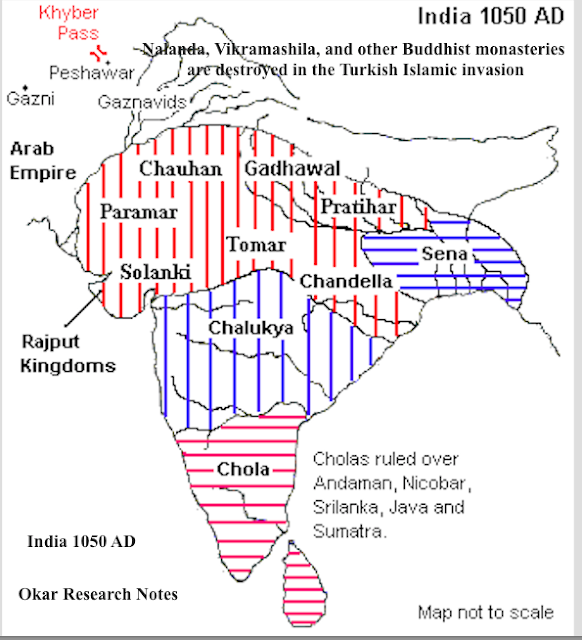 "Walter Lawrence, in his the Valley of Kashmir informs that a Ladakhi Lama, told him that the Gopadari situated towards the north of Pandrethan, was a sacred place for the Buddhists, who used to call it Pushpahari. Naropa, the great Kashmiri Kalachakra Tantric used to stay in the sacred sanctuary of the Gopadari. It is suggested to search out the remains of this Stupa, situated in the private estate of Maharaja Karan Singh between Hari Vivas and the Ziarat."…http://fidahassnain.myasa.net/2010/12/buddhist-heritage-of-kashmir/

"Photograph of the Meruvardhanaswami temple at Pandrethan near Srinagar in Jammu and Kashmir, taken in 1868. Pandrethan, now mostly in ruins, is one of Kashmir's historic capitals, said by Kalhana in his poetical account of Kashmiri history called Rajatarangini to have been founded by king Pravarsena in the 6th century AD. Its name thus derives from Puranadishthana or 'old town'. The small stone Shiva temple in the picture dates from the mid-10th century, reputedly erected by a minister named Meru. It was set in a spring-fed tank and its plinth is now submerged. This general view of the temple is reproduced in Henry Hardy Cole's Archaeological Survey of India report, 'Illustrations of Ancient Buildings in Kashmir,' (1869), in which he wrote, 'The small village of Pandrethan is situated on the Jhelum, about a mile and a half to the south-east of Srinagar...The Temple is close to the village, and stands in the centre of a tank of water...At the time of my visit, the water was about two feet over the floor of the Temple, and I had to obtain a small boat to enable me and my surveyors to take measurements. The stone ceiling is elaborately carved in bas-relief figures, and it is one of the most perfect pieces of ancient carving that exists in Kashmir...The pyramidal roof is divided into two portions by an ornamental band. The corner pilasters are surmounted by carved capitals, and the pediments of the porches appear to have terminated with a melon-shaped ornament. The ceiling is formed of nine blocks of stone; four resting over the angles of the cornice, reduce the opening to a square, and an upper course of four stones still further reduces the opening, which is covered by a single block decorated with a large lotus.' 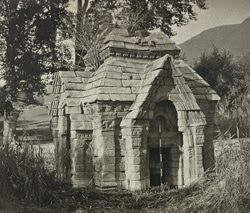 Kashmir. Temple of Meruvarddhanaswami at Pandrethan near Srinagar. View of south-west face. Probable date A.D. 913 to 921