"Luminous mind (also, "brightly shining mind," "brightly shining citta") (Sanskrit prakṛti-prabhāsvara-citta, Pali pabhassara citta) is a term attributed to the Buddha in the Nikayas. The mind (Citta) is said to be "luminous" whether or not it is tainted by mental defilements......The statement is given no direct doctrinal explanation in the Pali discourses, but later Buddhist schools explained it using various concepts developed by them. The Theravada school identifies the "luminous mind" with the bhavanga, a concept first proposed in the Theravada Abhidhamma. The later schools of the Mahayana identify it with both the Mahayana concepts of bodhicitta and tathagatagarbha. The idea is also connected with features of Dzogchen thought."…..http://en.wikipedia.org/wiki/Luminous_mind 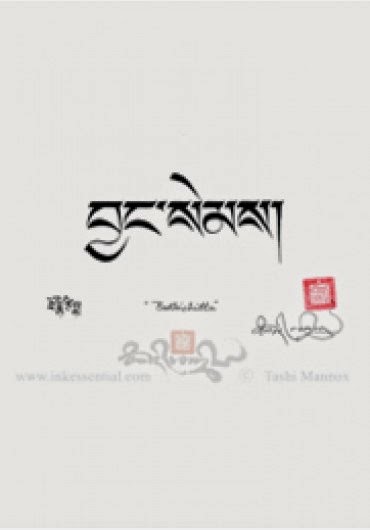 "Bodhicitta…..The Mahayana interprets the brightly shining citta as bodhicitta, the altruistic "spirit of awakening." The Astasahasrika Perfection of Wisdom Sutra describes bodhicitta thus: "That citta is no citta since it is by nature brightly shining." This is in accord with Anguttara Nikaya I,10 which goes from a reference to brightly shining citta to saying that even the slightest development of loving-kindness is of great benefit. This implies that loving-kindness - and the related state of compassion - is inherent within the luminous mind as a basis for its further development. The observation that the ground state of consciousness is of the nature of loving-kindness implies that empathy is innate to consciousness and exists prior to the emergence of all active mental processes."…..http://en.wikipedia.org/wiki/Luminous_mind

"Avestan angra mainyu "seems to have been an original conception of Zoroaster's."…. In the Gathas, which are the oldest texts of Zoroastrianism and are attributed to the prophet himself, angra mainyu is not yet a proper name…..In the one instance in these hymns where the two words appear together, the concept spoken of is that of a mainyu ("mind", "mentality", "spirit" etc.)…..http://en.wikipedia.org/wiki/Angra_Mainyu 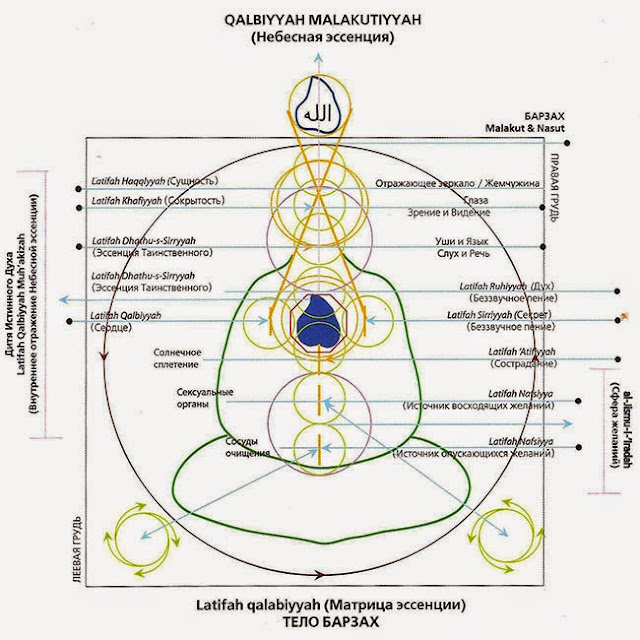 "……a Sufi work on the stations of the heart .... The word “heart” is similar to the word “eye” ('ayn)….These elements, or stations (maq ̄am ̄at) in the terminology of the author, are the breast (.sadr), the heart proper (qalb), the inner heart (fu’ ̄ad) and the intellect (lubb). They are arranged in concentric spheres, the breast being the outermost sphere followed on the inside by the heart, the inner heart and the intellect. Within the intellect are yet other stations which, however, are too subtle to be described in words…..Each of these stations of the heart has its own characteristics and functions. Thus the breast (.sadr) is the abode or seat of the light of Islam (nu ̄r al-Isl ̄am). It is also the repository for that kind of knowledge (‘ilm) required for the practice of Islam, such as knowledge of the Quire’ ̄an, the Prophetic traditions and the religious law (shar ̄ı‘ah)…..The heart proper (qalb), which is within the breast, is the abode of the light of faith (nu ̄r al-im ̄an). Faith is the acceptance by the heart of the truth of God’s revelation. The heart is also the repository of what the author calls valuable or useful knowledge (al-‘ilm al- n ̄afi‘). This is an interior knowledge of reality (al-h.aq ̄ıqah)that can only be granted to one by God. It cannot be learned from books or from a teacher as can the type of knowledge associated with the breast….The inner heart (fu’ ̄ad) is the abode of the light of gnosis (nu ̄r al-ma‘rifah). It is associated with the vision (ru’yah) of reality. Whereas the heart has mere knowledge of reality, the inner heart actually sees reality."…..http://faculty.washington.edu/heer/stations.pdf 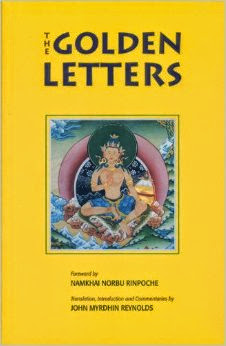 "Dzogchen: Thodgal (Leap-Over) Instructions by Dudjom Lingpa....there are three kinds of lamps of the vessel. The quintessence of the body is the citta lamp of the flesh at the heart, the inside of which is soft white. This is called the lamp of the channels, the quintessence of the channels, and hollow crystal kati channel. It is a single channel, one-eighth the width of a hair of a horse's tail, with two branches that penetrate inside the heart like the horns of a wild ox. They curve around the back of the ears and come to the pupils of the eyes. Their root is the heart, their trunk is the channels, and their fruit is the eyes.....http://www.theopendoorway.org/thodgal.html

"Discovering drala is indeed to establish ties to your world, so that each perception becomes unique. It is to see with the heart, so that what is invisible to the eye becomes visible as the living magic of reality." (Trungpa: 1984..pg 105)

"The Nature of Mind is not only ... primordial purity (ka-dag), but it is equally characterized by a luminous clarity (gsal-ba) and intrinsic awareness (rig-pa)……the light of awareness that illuminates our world. ... This inner light (nang >od), the light of awareness, resides in the hollow space inside ... a maroon-colored carnelian stone decorated with white crystals ... . This inner light of awareness proceeds from the hollow space ..., moving upward through the kati channel, to the two ... lenses to focus this light. The two ... are the gateways for the emergence into outer space of this inner light of awareness…..Thus, this light and the images that appear in this light, are actually something internal ..., but here they manifest in the empty space in front of oneself. The light ... is projected ... out through the lenses of the two eyes into the space in front, much like one is watching a cinema show. This process may be compared to a magic latern or a projector. ...The objects that appear are not really outside oneself. ……http://texts.00.gs/Practice_of_Dzogchen_in_the_Zhang-Zhung_Tradition,_2.htm…..Practice of Dzogchen in the Zhang-Zhung Tradition of Tibet: Translations from the The Gyalwa Chaktri of Druchen Gyalwa Yungdrung, and The Seven-fold Cycle of the Clear Light By:John Myrdhin Reynolds (translator)


"Swiss psychiatrist Carl Jung that describe his encounter with the Native American chief of the Taos pueblos in New Mexico in 1932….I was able to talk with him as I have rarely been able to talk with a European,’ Jung recalls…Chief Ochwiay Biano, which means Mountain Lake, must have sensed a kindred spirit in the Swiss doctor, because he was devastatingly candid with him….‘See how cruel the whites look, their lips are thin, their noses sharp, their faces furrowed and distorted by folds. Their eyes have a staring expression; they are always seeking something. What are they seeking? The whites always want something. They are always uneasy and restless. We do not know what they want. We do not understand them. We think that they are all mad…..When Jung asks why he thinks they are all mad, Mountain Lake replies, ‘They say they think with their heads.’….’Why of course, says Jung, ‘What do you think with?’….’We think here,’ says Chief Mountain Lake, indicating his heart…..After this exchange, Jung fell into a deep meditation. The Pueblo Chief had struck a vulnerable spot.says of this exchange, what makes this dialogue reported by Jung so relevant is that it describes an encounter between a representative of the unconscious ‘heart thinking’ of the ancients and a modern man of science and a pioneer of consciousness who understood that the wisdom of the heart must catch up with our overdeveloped ‘thinking heads…".. https://jhaines6.wordpress.com/2011/04/19/jung-in-conversation-with-a-native-american-chief/
http://carljungdepthpsychology.blogspot.com/2012/07/conversation-with-native-american-chief.html 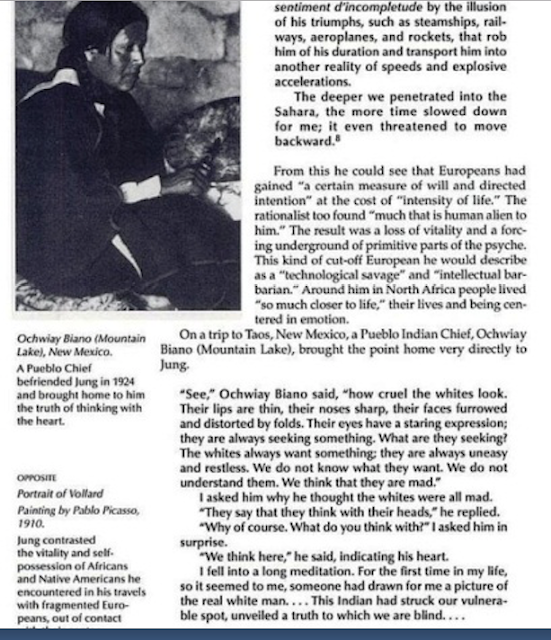