"Belukha Mountain (Russian: Белуха; Altai: Muztau), located in the Katun Mountains, is the highest peak of the Altai Mountains in Russia. It is part of the World Heritage Site entitled Golden Mountains of Altai…..Traditionally called Uch Sumer, meaning 3 peaks, it goes by many names among different Altaian and Kazakh tribes. Archaeologist and some scholars of Buddhist history and philosophy believe that Belukha may be Sumeru, the Central Asian mountain in Buddhist belief that is the center of Shambala (Shangri-la )... where only the spiritually advanced may enter. Belukha is also the headwaters of the sacred Katun River. There are shrines, burial sites, petroglyphs, and standing stones scattered all around the mountain."…http://sacredmountains.blogspot.com/2007/08/mt-belukha.html 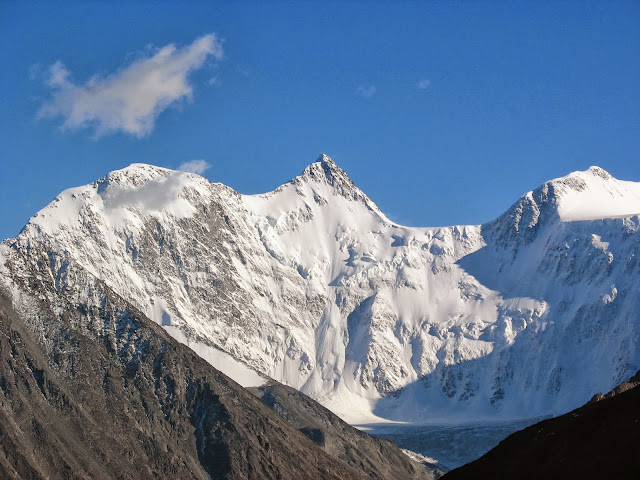 "Belukha is a twin-peaked mountain massif that rises along the border of Russia and Kazakhstan, just north of the point where these two borders meet those of China and Mongolia. There are several small glaciers on the mountain, including Belukha Glacier. Of the two peaks, the eastern peak (4,506 m, 14,784 ft.) is higher than the western peak (4,440 m, 14,567 ft.).

"Golden Mountains of Altai……The Altai mountains in southern Siberia form the major mountain range in the western Siberia biogeographic region and provide the source of its greatest rivers – the Ob and the Irtysh. Three separate areas are inscribed: Altaisky Zapovednik and a buffer zone around Lake Teletskoye; Katunsky Zapovednik and a buffer zone around Mount Belukha; and the Ukok Quiet Zone on the Ukok plateau. The total area covers 1,611,457 ha. The region represents the most complete sequence of altitudinal vegetation zones in central Siberia, from steppe, forest-steppe, mixed forest, subalpine vegetation to alpine vegetation. The site is also an important habitat for endangered animal species such as the snow leopard."…..http://whc.unesco.org/en/list/768

"The region has a rich cultural heritage. The first humans appeared in the region almost 1 million years ago, as evidenced by Palaeolithic settlements in the region of Gorno-Altaisk. The Golden Mountains area was part of emerging and collapsing tribal unions, khanates, and the empires of the Scythians, Turks, Uigurs, Yenissey Kirgiz, Kidans, Mongols and Oitrats. From the mid-18th century, the Altai region became part of the Russian Empire."….http://whc.unesco.org/en/list/768

"Roerich kept a diary during the trip (published as Altai-Himalaya: A Travel Diary)15 and, while in Mongolia, noted that, “belief in the imminence of the era of Shambhala was very strong.” In his book, Heart of Asia, Roerich describes both his scientific observations and his personal spiritual quest. Although he was ready to listen to tales of underground cities as part of the adventure, his main interest centred on the spiritual dynamics of Shambhala and its importance as a symbol of the coming age of peace and enlightenment."…. Nicholas Roerich, Altai-Himalaya: A Travel Diary (1929); Other books by Roerich: The Heart of Asia (1930); Shambhala (1930)

"Shambala, as legend has it, is a mystical kingdom hidden somewhere beyond the snowy peaks of the Himalaya. The physical place is said to be in Central Asia, north west of Tibet.....or a valley in southern Siberia. The name means “place of peace/tranquility/happiness”. It is a “pure land” where all citizens are enlightened…….Although an actual location on earth may represent it, His Holiness the Fourteenth Dalai Lama explains that Shambhala exists purely as a spiritual realm ."….http://sacredmountains.blogspot.com

"The Roerichs’ Stone: Following from clues in their books and other primary sources, the Roerichs’ talisman, sometimes known as ‘Chintamani’ but generally called ‘the Stone’, was a palm-sized mineral object which can be identified as a piece deriving from the giant iron meteorite named Armanty in the scientific record, or in its original locality Mongon-temee, ‘Silver Camel’, and Mongon-tosh, ‘Silver Saddle’. The giant meteorite weighed about twenty-eight tons and formerly lay at the site of its fall in Mongolian territory in the foothills of the Altai mountains, the co-ordinates of whose impact pit are suggested as 46 52′ 37″ N, 90 58′ 35″ E. The location would therefore have represented the place described by Helena Roerich as the ‘foundation of Shambhala’ – the symbolic earthly focus of the sacred realm of Shambhala as the Roerichs would have understood it. The meteorite itself is no longer at this site, having been removed to Urumqi by the Chinese in 1965, but that is another story which is completely unconnected with the Roerichs’ activities. It is an open question whether Nicholas and George Roerich visited the site while they were in Mongolia in 1926-27; a cryptic account in Nicholas Roerich’s book Himavat, although evidence of the connection of the Stone to Mongolia, refers to an episode during their venture in Inner Mongolia in 1935. A question also remains about the present whereabouts of the Roerichs’ Stone, but the presumption must be that it is now in Russia. At present the best evidence of its actual appearance and characteristics is a photograph of it taken in 1923 held in the archives of the Roerich Museum in New York."….http://roerichandchintamani.wordpress.com