"Anahita is a Water Goddess, a Fertility Goddess, and a Protector of Women. Later ... She is sometimes depicted as riding a tiger (like Durga!) ...

A 4th century BC depiction of Anahita, radiant and mounted on a lion, being worshipped by Artaxerxes II....Artaxerxes II Mnemon was king of Persia from 404 BC until his death in 358 BC. He was a son of Darius II of Persia and Parysatis."

"Inanna, the forerunner of the Akkadian Ishtar, appears in the earliest known forms of the Sumerian religion…. the main “attributes” of Ishtar / Inanna: The female form, the helmet, the weapons (arrows on the back, mace or ax in left hand), standing on a wild beast (probably a lion here). As with all ancient deities, it is essential to list those “attributes” properly as they often were the only means to identify a given god or goddess whose representations otherwise might differ widely from place to place and in time. Hindus still proceed in this way in order to identify their own deities……Referring to Hinduism, a present-day deity still worshiped by Hindus, Durga…..If you look at the attributes of durga, they all are there: female form, helmet, weapons, riding on a wild beast (there are no lions in India so here, it is a tiger). Even some of the weapons are the same: bow and mace. Another similar (but even darker) Hindu goddess is Kali…..Modern Hindus are not conscious that they still are worshiping Ishtar/Inanna under another name."….http://palinidolatry.wordpress.com/ishtar-like-deities/ 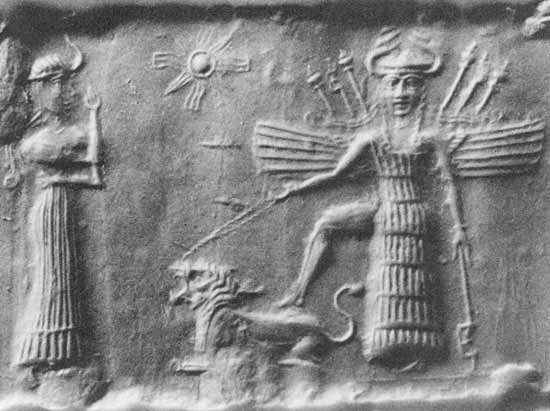 "Inanna can be considered the most prominent female deity in ancient Mesopotamia.[1] As early as the Uruk period (ca. 4000–3100 BC), Inanna was associated with the city of Uruk.... Inanna (Sumerian: Inanna; Akkadian: Ištar) was the Sumerian goddess of love, fertility, and warfare, and goddess of the E-Anna temple at the city of Uruk, her main centre. 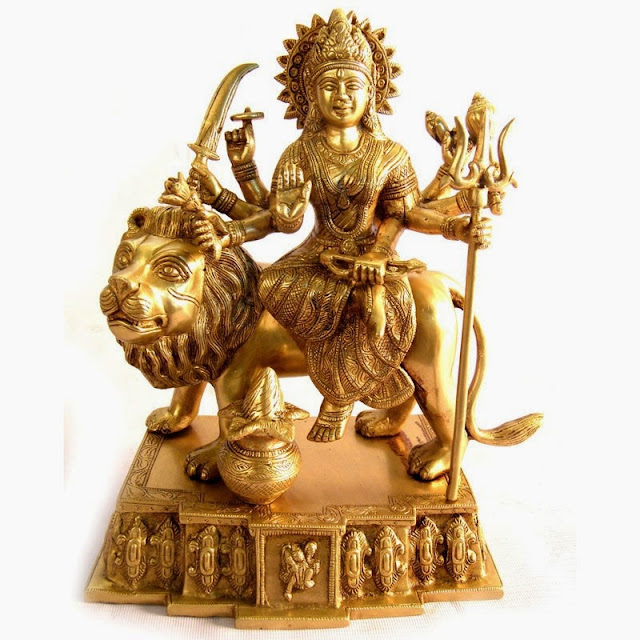 "Durga (Sanskrit: दुर्गा), meaning "the inaccessible" or "the invincible", is the most popular incarnation of Devi and one of the main forms of the Goddess Shakti in the Hindu pantheon...She is Goddess Lakshmi and Goddess Saraswati in her mild form; Goddess Kali and Goddess Chandi in her wrathful form. Durga is also called Padmanabha-Sahodari and Narayani, the sister of Lord Vishnu. According to Shaivism and Shaktism, she is supreme, but to bring back lord Shiva in Sansar, she was reborn in human form (Sati and Parvati) to marry Shiva. Durga gave birth to his first child Kartikeya.

"Besides Durga in Hinduism, there are many other instances of goddesses that fit the same profile as Inanna/Ishtar:The west-semitic goddess Astarte, a near duplicate of Ishtar referred to abundantly in the Bible.The Greek/Roman goddess Aphrodite/Venus who, although chiefly being associated with sexuality, still was viewed clearly enough as a warrior goddess in Caesar’s time to be claimed by him as his ancestor under the label “Venus Victrix” (the victory giver) or, in Greek, “Aphrodite Enoplios” (the armed, same root as in “hoplite“). One noteworthy feature of Aphrodite/Venus is her association with Adonis, which generally is considered a duplicate of the god Dumuzi/Tammuz associated with all Semitic forms of Inanna/Ishtar, including Astarte. Tammuz is mentioned in the Bible: Ezekiel 8:14 “Then he brought me to the entrance of the north gate of the house of the Lord, and behold, there sat women weeping for Tammuz” The Greek/Roman Goddess Athena/Minerva often represented helmeted and holding a javelin and shield. In the picture below, notice the weapons, the helmet, and the serpent, an animal also frequently associated with Ishtar/Inanna (as she is with Eve in Genesis)."….http://palinidolatry.wordpress.com/ishtar-like-deities/ 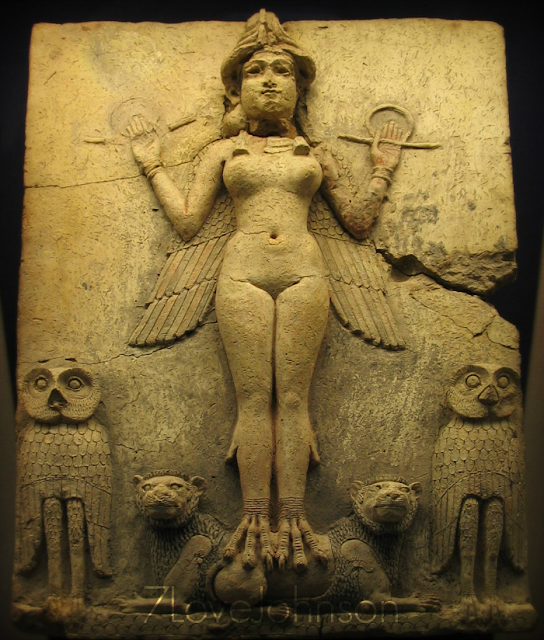 Astarte (Ancient Greek: Ἀστάρτη, "Astártē") is the Greek name of the Mesopotamian (i.e. Assyrian, Akkadian, Babylonian) Semitic goddess Ishtar....Astarte was connected with fertility, sexuality, and war. Her symbols were the lion, the horse, the sphinx, the dove, and a star within a circle indicating the planet Venus. Pictorial representations often show her naked. She has been known as the deified evening star." 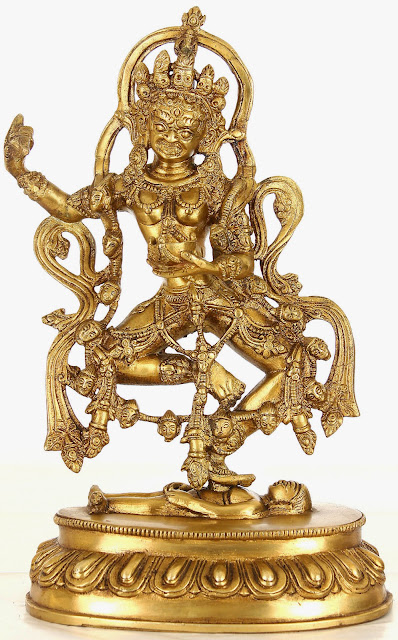 "Vajradakini.....Vajradakini is the designation of the dancing semi-wrathful form of Vajravarahi. She holds a vajra knife in her raised right hand, and a cup, or sometimes a vial, of amrita in the other....The symbolism of the cup that she raises to her lips is related to the activity of the Great Goddess of India, Durga. .....Sometimes she is depicted holding a two-sided drum as when she is equated with Machig Labdron, who popularized the Chod (pron. cho) as a complete path."

Yogini (Sanskrit: योगिनी, yoginī) is the complete form source word of the masculine yogi- and neutral/plural "yogin." Far from being merely a gender tag to all things yogi, "Yogini" represents both a female master practitioner of Yoga, and a formal term of respect for a category of modern female spiritual teachers (in both hinduism and buddhism) in eastern countries such as India, Nepal, and Tibet.Numerous great yoginis and female mystics are mentioned in the Vedas; in fact, many of the vedic rishis were yoginis, rishikas. In classical Sanskrit literature, Yogini is the name of a class of female tantric sorceresses in the train of Durga, sometimes enumerated as 60, 64 or 65 (Harivaṃśa, Kathāsaritsāgara).Female power here denotes balance. In her book Passionate Enlightenment: Women in Tantric Buddhism, scholar Miranda Shaw writes that a large number of women like Dombiyogini, Sahajayogicinta, Lakshminkara, Mekhala, Kankhala Gangadhara, Siddharajni, and others, were respected yoginis and advanced seekers on the path to enlightenment.

"In the Tibetan Buddhism and Bön tradition, a female practitioner is known as a ngagma (see ngagpa), and in the Drikung Kagyu school of Buddhism, togdenma (Tenzin Palmo). These married tantric practitioners are required to devote significant time to retreat and spiritual practice. Ngagma are particularly known for performing birth rituals, weddings, funerals, divinations, and pacification of spiritual disruptions. Some ngagmas are comparable in practice to the Mahasidda yoginis of Indian Buddhism.

"Yogini is a term that finds reference in several texts related to Hinduism and Buddhism where its literal meaning is "shaman" or wisdom seer (rishi), a definition that could just as easily be interpreted as “alchemist.” Some of the greatest of the ancient rishis were in fact women. A female rishi is known as a rishika. 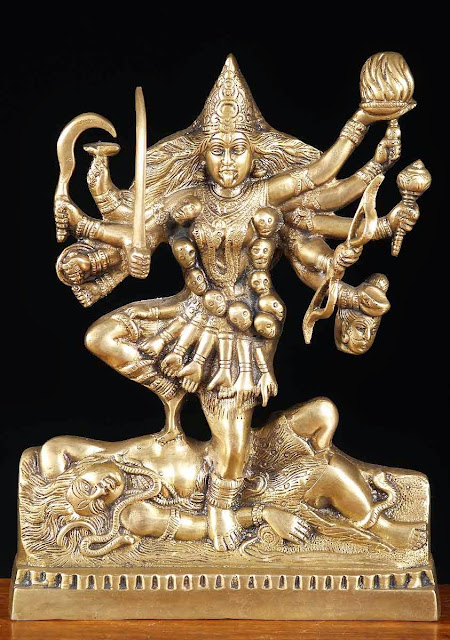 Kali stands on the corpse of Shiva with her long tongue sticking out of her mouth.....Kali wears a garland of skulls & a full skirt of arms.....Kali is the dark Hindu Goddess of time and change.

Goddess Durga (Hindustani pronunciation: [d̪uːrgaː]; Sanskrit: दुर्गा), meaning "the inaccessible" or "the invincible"; durga) is the most popular incarnation of Devi and one of the main forms of the Goddess Shakti in the Hindu pantheon.Ramprasad Chanda writes the following about the evolution of Durga from primitive goddess to her current form.... "...it is possible to distinguish two different strata – one primitive and the other advanced. The primitive form of Durga is the result of syncretism of a mountain-goddess worshiped by the dwellers of the Himalaya and the Vindhyas, a goddess worshiped by the nomadic Abhira shepherd, the vegetation spirit conceived as a female, and a war-goddess. As her votaries advanced in civilisation the primitive war-goddess was transformed into the personification of the all-destroying time (Kali), the vegetation spirit into the primordial energy (Adya Sakti) and the saviouress from “samsara” (cycle of rebirths) , and gradually brought into line with the Brahmanic mythology and philosophy."