"The Heliodorus pillar is a stone column that was erected around 113 BC in central India in Vidisha near modern Besnagar, by Heliodorus, a Greek ambassador of the Indo-Greek king Antialcidas to the court of the Sunga king Bhagabhadra. The site is located only 5 miles from the Buddhist stupa of Sanchi……The pillar was surmounted by a sculpture of Garuda and was apparently dedicated by Heliodorus to the god Vāsudeva in front of the temple of Vāsudeva. 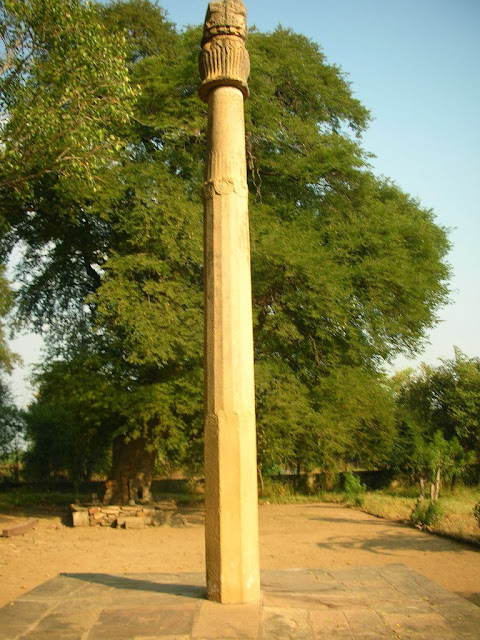 Inscription of the Heliodorus pillar that was made by Heliodorus 110 BCE….
"Erected here by the devotee Heliodoros,
the son of Dion, a man of Taxila,
sent by the Great Greek (Yona) King
Antialkidas, as ambassador to
King Kasiputra Bhagabhadra, the Savior
son of the princess from Benares, in the fourteenth year of his reign."
(Archaeological Survey of India, Annual Report (1908-1909)) 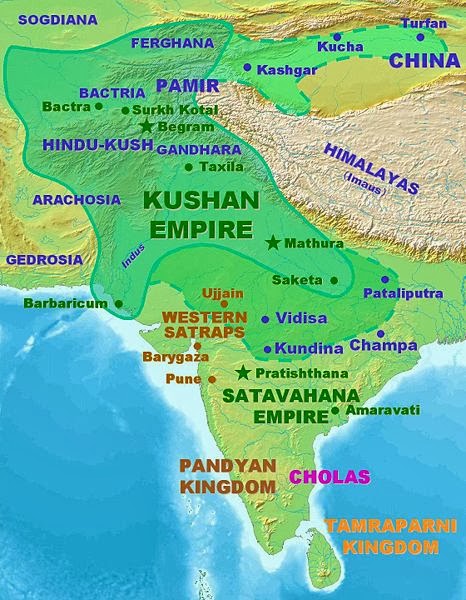 Taxila (Urdu ٹيڪسيلا), or Takṣaśilā in Sanskrit, literally meaning "City of Cut Stone" or "Rock of Taksha") is a town and an important archaeological site in Rawalpindi district of the Punjab province in Pakistan. Taxila is situated about 32 km (20 mi) north-west of Islamabad and Rawalpindi; just off the famous Grand Trunk Road. The town lies 549 metres (1,801 ft) above sea level. It is the head-quarters of the Taxila Tehsil in Rawalpindi district.

"Antialcidas Nikephoros "the Victorious" was a Greek King of the Indo-Greek Kingdom, king of the Eucratid Dynasty, who reigned from his capital at Taxila. Bopearachchi has suggested that he ruled from ca. 115 to 95 BCE in the western parts of the Indo-Greek realms, …Antialcidas may have been a relative of the Bactrian king Heliocles I, but ruled after the fall of the Bactrian kingdom. Several later kings may have been related to Antialcidas: Heliokles II, Amyntas, Diomedes and Hermaeus all struck coins with similar features….Though there are few sources for the late Indo-Greek history, Antialcidas is known from an inscription left on a pillar (the Heliodorus pillar), which was erected by his ambassador Heliodorus at the court of the Sunga king Bhagabhadra at Vidisha, near Sanchi. It states that he was a devotee of Krishna, the Hindu god……A part of the inscriptions says:….."This Garuda-standard was made by order of the Bhagavata ... Heliodoros, the son of Dion, a man of Taxila, a Greek ambassador from King Antialkidas, to King Bhagabhadra, the son of the Princess from Benares, the saviour, while prospering in the fourteenth year of his reign.""….http://en.wikipedia.org/wiki/Antialcidas

"The Greco-Bactrian Heliocles, circ. 145–130 BCE, relative (son or brother) and successor of Eucratides the Great, was probably the last Greek king who reigned over the Bactrian country. His reign was a troubled one. According to Roman historian Justin, Eucratides was murdered by his son and co-ruler, though Justin fails to name the perpetrator. The patricide might have led to instability, even civil war, which caused the Indian parts of the empire to be lost to Indo-Greek king Menander I……From 130 BCE a nomadic people, the Yuezhi, started to invade Bactria from the north and we could assume that Heliocles was killed in battle during this invasion. Details from Chinese sources seem to indicate that the nomad invasion did not end civilisation in Bactria entirely. Hellenised cities continued to exist for some time, and the well-organised agricultural systems were not demolished…..Even if this was the end of the original Greco-Bactrian kingdom, the Greeks continued to rule in northwestern India to the end of the 1st century BCE, under the Indo-Greek Kingdom. It is unclear whether the dynasty of Eucratides was extinguished with the death of Heliocles I or if members of the family emigrated eastwards. Several later Indo-Greek king, including Heliocles II, struck coins which could be associated with the dynasty"….http://en.wikipedia.org/wiki/Heliocles_I

"The Yuezhi (Chinese: 月氏; pinyin: Yuèzhī) were an ancient Indo-European people often identified with the Tókharoi (Τοχάριοι) of Classical sources. They were originally settled in the arid grasslands of the eastern Tarim Basin area, in what is today Xinjiang and western Gansu, in China, before they migrated to Transoxiana, Bactria and then northern South Asia, where one branch of the Yuezhi founded the Kushan Empire."….http://en.wikipedia.org/wiki/Yuezhi 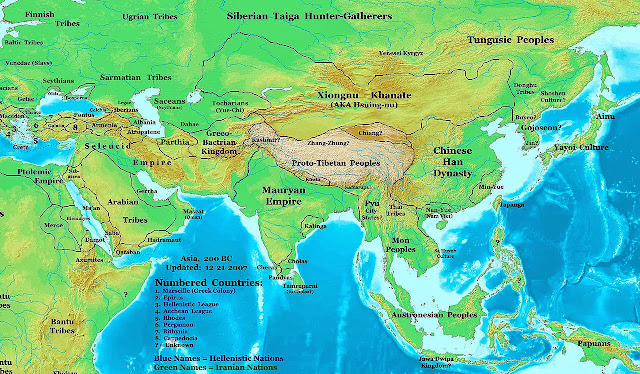 "The Kushan Empire (Sanskrit: कुषाण राजवंश, Kuṣāṇ Rājavaṃśa; BHS: Guṣāṇa-vaṃśa; Parthian: Kušanxšaθr) was an empire in South Asia originally formed in the early 1st century CE under Kujula Kadphises in the territories of ancient Bactria around the Oxus River (Amu Darya), and later based near Kabul, Afghanistan. The Kushans spread from the Kabul River Valley to defeat other Central Asian tribes that had previously conquered parts of the northern central Iranian Plateau once ruled by the Parthians, and reached their peak under the Buddhist emperor Kanishka (127–151), whose realm stretched from Turfan in the Tarim Basin to Pataliputra on the Gangetic Plain."….http://en.wikipedia.org/wiki/Kushan_Empire

"Sanchi is a small village in Raisen District of the state of Madhya Pradesh, India, it is the location of several Buddhist monuments dating from the 3rd century BCE to the 12th CE

"Menander I Soter "The Saviour" (known as Milinda in Indian Pali sources) was the Indo-Greek king (165 -130 BC) who established a large "empire in the South Asia and became a patron of Buddhism…….Menander was born in the Caucasus, and was initially a king of Bactria. He eventually established an empire in the Indian subcontinent stretching from the Kabul River valley in the west to the Ravi River in the east, and from the Swat River valley in the north to Arachosia (the Helmand Province). Ancient Indian writers indicate that he launched expeditions southward into Rajasthan and as far east down the Ganges River Valley as Pataliputra (Patna), and the Greek geographer Strabo wrote that he "conquered more tribes than Alexander the Great."…..http://en.wikipedia.org/wiki/Menander_I

Ashoka Maurya (304–232 BCE)…."The pillars of Ashoka are a series of columns dispersed throughout the northern Indian subcontinent, erected or at least inscribed with edicts by the Mauryan king Ashoka during his reign in the 3rd century BC. Originally, there must have been many pillars but only nineteen survive with inscriptions, and only six with animal capitals, which were a target for Muslim iconoclasm. Many are preserved in a fragmentary state. Averaging between 40 to 50 feet (12 to 15 m) in height, and weighing up to 50 tons each, the pillars were dragged, sometimes hundreds of miles, to where they were erected."…..http://en.wikipedia.org/wiki/Pillars_of_Ashoka

"Bhagabhadra was one of the kings of the Indian Sunga dynasty. He ruled in north, central, and eastern India around 110 BCE. Although the capital of the Sungas was at Pataliputra, he was also known to have held court at Vidisha…..He is best known from an inscription at the site of Vidisha in central India, the Heliodorus pillar, in which contacts with an embassy from the Indo-Greek king Antialcidas is recorded, and where he is named "Kasiputra Bhagabhadra, the Savior son of the princess from Benares…It is thought that name Bhagabhadra also appears in the regnal lists of the Sungas in the Puranic records, under the name Bhadraka, fifth Sunga ruler of the Sungas."….http://en.wikipedia.org/wiki/Bhagabhadra

Indian Epigraphy : A Guide to the Study of Inscriptions in Sanskrit, Prakrit ...By Richard Salomon Associate Professor of Sanskirt in the Department of Asian Languages and Literature University of Washington