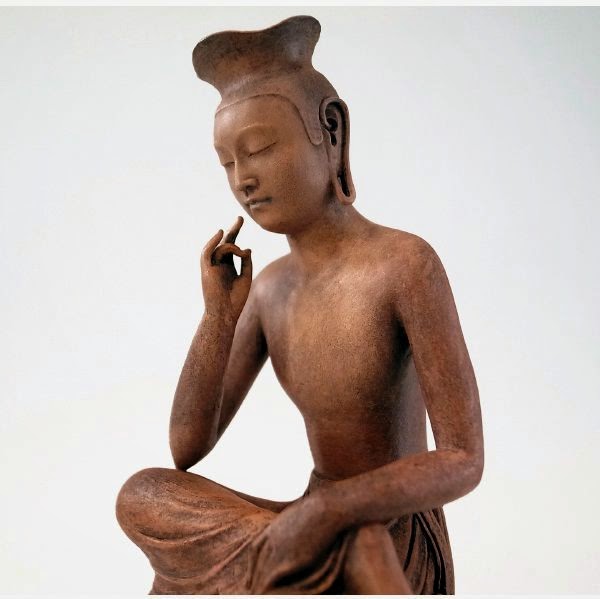 "The "Seated Maitreya"....In Japan, Maitreya Buddha is called Miroku Bosatu. The original one is the national treasure of Japan, and now is protected in Kouryu-ji, Kyoto....the original one was sent to the temple by the most famous historical figure in Japan's history--Shotoku Taishi."

"In Japan it is widely shared that Japanese Buddhism (Mahayana) was formed under the strong influence of Iranian religion………In the Central Asia (present Afghanistan and Pakistan) Iranian religions met primitive Buddhism and made a syncretic new religious movement. The first is Miroku Buddhism 弥勒仏教, the second is Pure Land Buddhism 浄土教, the third is Esoteric Buddhism 密 … These three syncretic religions brought Simorghian culture and Mithraism to Japan….recent Chinese and Japanese researchers attested that the Iranian religion which spread in the Central Asia was not Zoroastrianism (Mazda worship) but the ancient Aryan religion (and Simorghian culture) which includes Zoroastrianism as a branch sect. They also think that it is this ancient Aryan religion that came to Japan in Asuka era (592-710 AD). (Aoki. A History of Zoroastrianism, p201, 205-207) It seems Manichaeism was a branch of it as well. "…..http://japanesemythology.wordpress.com/author/heritageofjapan/page/3/

"The name Miroku itself is the definitive attestation that the origins of Miroku is Mithra. According to Prof. Imoto, the origin of the name Miroku is Middle Persian Mihrak, which is the nickname for Mithra. Mihrak was transcripted into Mi-l’әk* (Miroku 弥勒) in Northern Buddhism (Mahayana Buddhism) ( Imoto “Influence of Iranian Culture to Japan”, pp1-6). He is the first scholar who proposed the theory that Iranian religion, which was merged with Buddhism, came to Japan in Asuka era 592-710."….http://www.kavehfarrokh.com/wp-content/uploads/2009/10/an_introduction_to_the_simorghian_culture_and_mithraism_in_the_east_asia_v2.pdf 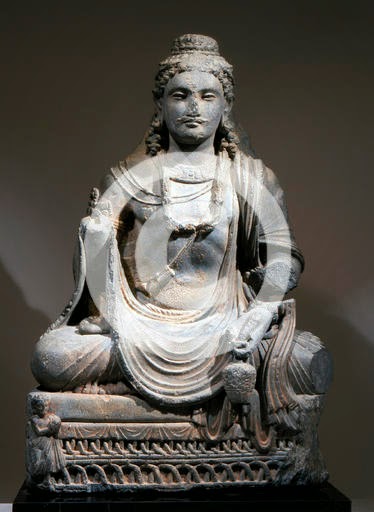 "Statue of Maitreya, the Buddha of the Future, from Gandhara, north-west Pakistan, Kushan period, 2nd-3rd century. Depicted as the Reassuring Maitreya. Sitting on a throne of woven cane, with the donor of the statue to the bottom left of the throne, Maitreya is clothed in elegant garments and fine jewellery. From the Theresa McCullough Collection, London...http://www.heritage-images.com

"Dainichi Nyorai, the Japanese version of Vairocana, one of the Five Dhyani Buddhas….Vairocana is also seen as the embodiment of the Buddhist concept of Emptiness. In the conception of the Five Wisdom Buddhas of Vajrayana Buddhism, Vairocana is at the centre…..He is also mentioned as an epithet of the Buddha Śakyamuni in the Sutra of Meditation on the Bodhisattva Universal Virtue, who dwells in a place called "Always Tranquil Light"….Reeves, Gene (2008). The Lotus Sutra: A Contemporary Translation of a Buddhist Classic. Somerville: Wisdom Publications. ISBN 0-86171-571-3. 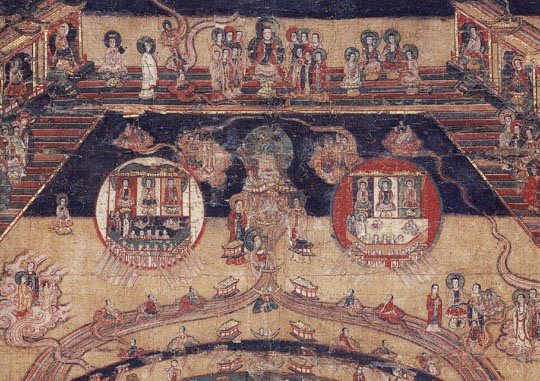 "Heaven and Earth: A painting depicting Manichaeism's cosmic view shows what appears to be heaven at the top, the moon on the left and the sun on the right.... depicts Manichaeism’s cosmic view in vivid colors on a silk cloth... it is probably the only painting currently known that covers Manichaeism’s cosmologic view in complete form....A mushroom-shaped mountain, called Mount Meru, is shown on the ground where humans live."...http://www.japantimes.co.jp/news/2010/09/28/national/manichaeism-cosmology-painting-found/#.VOSODEIh9S8

"Mithra was represented by these Chinese characters: Mi 密, Mi 蜜 and Milo 弥勒. Mi 密 means both secret (esoteric) and closeness (friendship). Mi 蜜 means honey (sacred food of Persians). Mi-jiao/Mikkyô means both secret teaching and Mithra’s teaching. Therefore, they used this term to represent that Esoteric Buddhism is the perfected form of Eastern Mithraism itself. Mahâvairocana-Miroku IS Mithra. This view has gained much popularity and supports among Buddhists, Shugen-dô-ists and occultists of Japan today."……http://www.kavehfarrokh.com/wp-content/uploads/2009/10/an_introduction_to_the_simorghian_culture_and_mithraism_in_the_east_asia_v2.pdf

"There are two major sects in Esoteric Buddhism: Tendai and Shingon…Shingon 真言 means manthra. Shingon teaching was brought to Japan by Kûkai 空海 (774-835). He founded Shingon sect in 816. Its Lord God (Buddha) is Mahâvairocana 大日 whose name means “Great Sun God” ….Kûkai had been to China for several years. During his stay in China, he visited a Persian Temple (ancient Aryan religion of the Central Asia) and learned its teachings (Kûkai’s diary)…..According to the Shingon syncretism, Mahâvairocana is also identical with Shintô’s Lord God (Amaterasu). Therefore, Mahâvairocana, Miroku, and the Lord God of Shintô (Aamaterasu) are identical (the same one Sun God) (Hiraoka. “Development of the Doctrine about Miroku’s Paradise in Heian Era”)….Under the syncretism doctrine of Shingon developed Ryôbu-Shintô 両部神道. Ryôbu means syncretism of Buddhist deities and Shintô deities. Robu-Shintô is a branch of Shingon sect."….http://www.kavehfarrokh.com/wp-content/uploads/2009/10/an_introduction_to_the_simorghian_culture_and_mithraism_in_the_east_asia_v2.pdf

"Bodhidharma was a Buddhist monk who lived during the 5th/6th century CE. He is traditionally credited as the transmitter of Ch'an (Sanskrit: Dhyāna, Japanese: Zen) to China, and regarded as its first Chinese patriarch....... the Japanese tradition regards Bodhidharma to be from Persia......(Masato Tojo, Zen Buddhism and Persian Culture).....Bodhidharma was primarily active in the lands of the Northern Wèi Dynasty (386–534). ....He is referred as "The Blue-Eyed Barbarian" (碧眼胡) in Chinese Chan texts......The earliest text mentioned Bodhidharma is The Record of the Buddhist Monasteries of Luoyang (洛陽伽藍記 Luòyáng Qiélánjì) which is compiled in 547 by Yáng Xuànzhī (Yang-Hsuan-chih 楊衒之), a writer and translator of Mahāyāna Buddhist texts into the Chinese language. Yang gave the following account: 'At that time there was a monk of the Western Region named Bodhidharma, a Persian Central Asian. "…..http://www.chinabuddhismencyclopedia.com/en/index.php?title=Bodhidharma_''blue_eyed_Persian'' 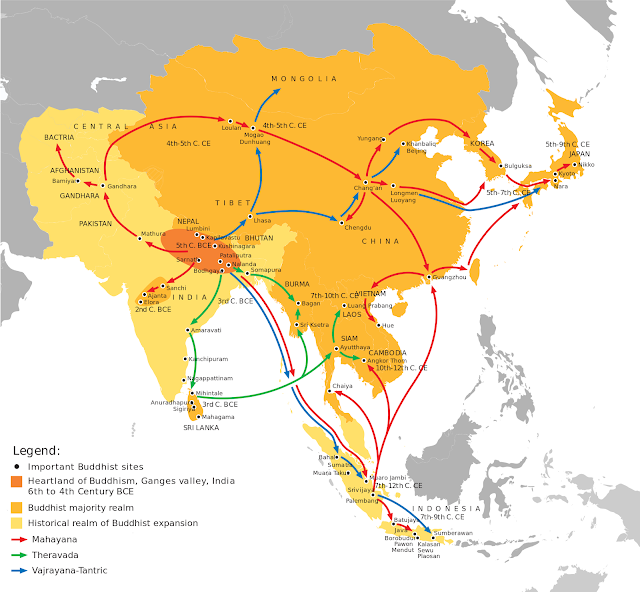