The Scythian Suite, Op. 20 is an orchestral suite by Sergei Prokofiev written in 1915….Prokofiev originally wrote the music for the ballet "Ala i Lolli" ("Ala i Lolliy"), whose story takes place among the Scythians. Commissioned by Sergei Diaghilev, the ballet was written to a scenario by Russian poet Sergey Gorodetsky. But when Diaghilev rejected the score even before its completion, the composer reworked the music into a suite for concert performance….http://en.wikipedia.org/wiki/Scythian_Suite

The suite is in four movements, and lasts around 20 minutes.
Invocation to Veles and Ala - barbaric and colorful music describing the Scythians' invocation of the sun
The Evil God and the Dance of the Pagan Monsters (also known as "The Alien God and the Dance of the Evil Spirits")—as the Scythians make a sacrifice to Ala, daughter of Veles, the Evil God performs a violent dance surrounded by seven monsters
Night - the Evil God harms Ala; the Moon Maidens descend to console her
The Glorious Departure of Lolli and the Cortège of the Sun - Lolli, the hero, comes to save Ala; the Sun God assists him in defeating the Evil God. They are victorious, and the suite ends with a musical picture of the sunrise"…http://en.wikipedia.org/wiki/Scythian_Suite.


"Veles (Cyrillic: Велес; Polish: Weles; Czech: Veles; Old Russian and Old Church Slavonic: Велесъ) also known as Volos (Russian: Волос) (listed as a Christian saint in Old Russian texts) is a major Slavic supernatural force of earth, waters and the underworld, associated with dragons, cattle, magic, musicians, wealth and trickery. He is the opponent of the Supreme thunder-god Perun, and the battle between two of them constitutes one of the most important myths of Slavic mythology. No direct accounts survive, but reconstructions speculate that he may directly continue aspects of the Proto-Indo-European pantheon and that he may have been imagined as (at least partially) serpentine, with horns (of a bull, ram or some other domesticated herbivore), and a long beard."…http://en.wikipedia.org/wiki/Veles_(god)

"Veles' nature for mischief is evident both from his role in Storm myth and in carnival customs of Koledari shamans. In his role as a trickster god, he is in some ways similar to both Greek Hermes and Scandinavian Loki, and like them, he was connected with magic. The word volhov, obviously derived from his name, in some Slavic languages still means sorcerer, whilst in the 12th century Russian epic The Tale of Igor's Campaign, character of Boyan the wizard is called Veles' grandson. Since magic was and is closely linked to music in primitive societies, Veles was also believed to be protector of travelling musicians. For instance, in some wedding ceremonies of northern Croatia (which continued up to 20th century), the music would not start playing unless the bridegroom, when making a toast, spilled some of the wine on the ground, preferably over the roots of the nearest tree. The symbolism of this is clear, even though forgotten long ago by those still performing it: the musicians will not sing until a toast is made to their patron deity."…. Boris Rybakov. Ancient Slavic Paganism. Moscow, 1981

"The Scythians (/ˈsɪθi.ən/ or /ˈsɪði.ən/; from Greek Σκύθης, Σκύθοι) were Iranic equestrian tribes who inhabited large areas in the central Eurasian steppes between the 7th century BC and 4th century AD.Their territories during the Iron Age were known to classical Greek sources as "Scythia". Their historical appearance coincided with the rise of equestrian semi-nomadism from the Carpathian Mountains of Europe to Mongolia in the Far East during the 1st millennium BC. The "classical Scythians" known to ancient Greek historians were located in the northern Black Sea and fore-Caucasus region. However, other Scythian groups encountered in Near Eastern and Achaemenid sources existed in Central Asia.[6] Moreover, the term "Scythian" is also used by modern scholars in an archaeological context, i.e. any region perceived to display attributes of the "Scytho-Siberian" culture."…..http://en.wikipedia.org/wiki/Scythians

"The Scythians and the Slavs both had the three worlds cosmology as well as a pantheon of seven primary deity; Agni (Svarog), Tabiti (Mokoš), Papaios (Perun), Api (Mat Zemlja), Oitosyros (Hors-Dajbog), Argimpasa (Ziva/Dodola), Thagimasidas (Veles). The number seven was sacred to pagan Slavs similar to way that the Norsemen revered the number nine. The Primary Chronicle says King Vladimir, prior to converting to Christianity, honored a pantheon of seven gods Perun, Hors, Dažbog, Stribog, Simargl, Mokoš and Veles. The preeminence of this particular number may be connected to the “land of seven rivers beyond the sea” described in the Book of Veles, a place believed to be the ancestral motherland of the ancient Slavs."....http://modrodnovery.com/the-scythians-and-thracians-slavic-roots-in-late-antiquity/ 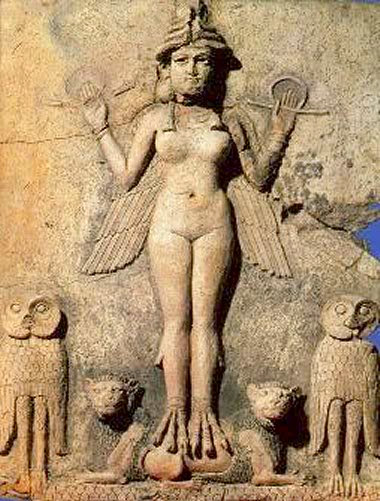 "The Medians and Persians honored Aredvi Sura Anahita (meaning “moist”, “mighty” and “pure” respectively) who was also known in Armenia as the “Virgin-Mother of Mithra”. The Scythian cult of Argimpasa was presided over by a female oracle-priestess and coins bearing her likeness exhibit the same zoomorphic appearance as the Greek nymph Echidna and the Kurdish goddess Shamaran.".......http://modrodnovery.com/the-scythians-and-thracians-slavic-roots-in-late-antiquity/