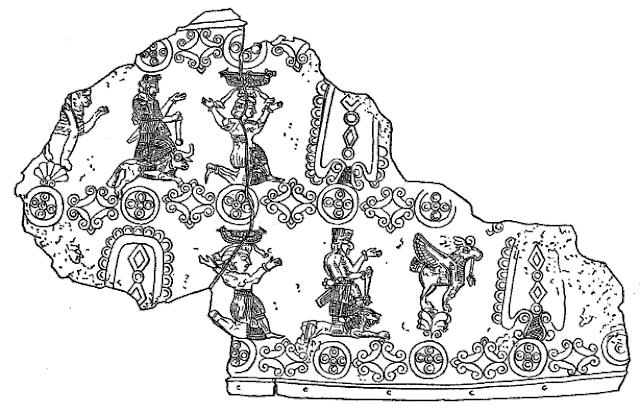 Part of a bronze belt. Karmir Blur.... the god Shivini, who is resting on one knee and supporting the winged sun-disc. Behind Shivini there is the god Teisheba on a bull, and below him the cartouche with the stylized sacred tree. On the left there are preserved the front parts of a shedu—the winged lion with a human head. (Armenian Historical Museum)] 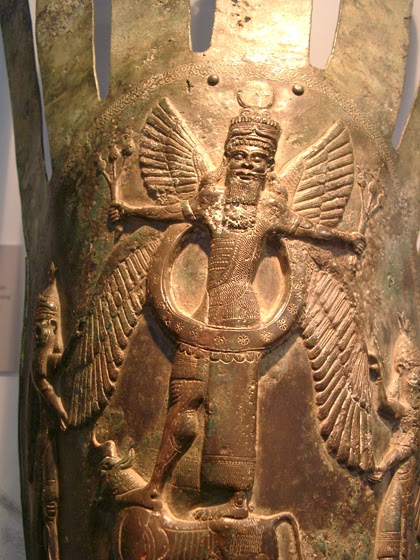 "The image above is from Urartu, the kingdom of Van, and shows a figure of divinity atop a bull. He wears the horned cap of divinity, has the wings of divinity, a pattern of rosettes the symbol of the Tree of Life surrounds him, holds the 3 segmented fruit from the Tree of Life and on top of his cap is a representation of the winged disk. Each of the fruits is debossed with a rosette. This is the ultimate image of divinity.... Shamush Sun Disksame arrangement is how the winged disk is represented. The Assyrians show Ashur their national god in much the same way. The circular rim with attached wings is a representation of the winged disk and is called the solar disk...... it is more than likely in this context to relate to the third person of the Urartian pantheon Shivini. The real sun disk, the sun disk of Shamash, is the smaller image of the stone disk. Look closely and you can see the rim with what appears as an empty center. There are pros and cons as to who is the origin of Shivini.".....http://firstlegend.info/van.html 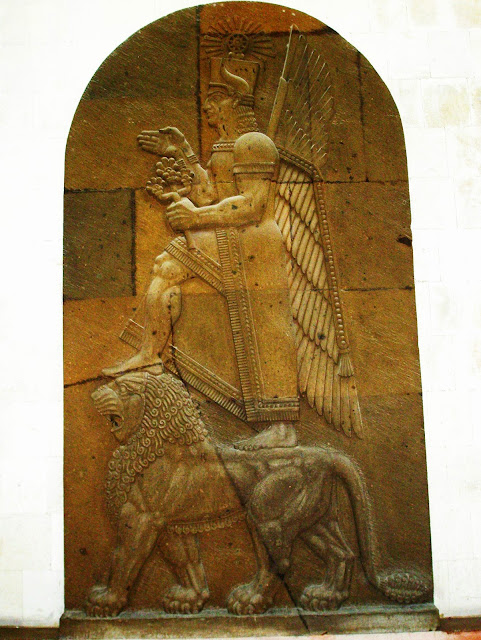 Khaldi was one of the three chief deities of Ararat (Urartu). His shrine was at Ardini.....The other two chief deities were Theispas of Kumenu, and Shivini of Tushpa....Of all the gods of Ararat (Urartu) pantheon, the most inscriptions are dedicated to him. His wife was the goddess Arubani. He is portrayed as a man with or without a beard, standing on a lion. Khaldi was a warrior god whom the kings of Urartu would pray to for victories in battle. The temples dedicated to Khaldi were adorned with weapons, such as swords, spears, bow and arrows, and shields hung off the walls and were sometimes known as 'the house of weapons'."

"Urartu (Armenian: Ուրարտու - Urartu, Assyrian: māt Urarṭu; Babylonian: Urashtu), corresponding to the biblical Kingdom of Ararat (Armenian: Արարատյան Թագավորություն) or Kingdom of Van (Armenian: Վանի Թագավորություն, Urartian: Biai, Biainili;) was a prehistoric Iron Age kingdom centred around Lake Van…. The kingdom rose to power in the mid-9th century BC, but was conquered by Media in the early 6th century BC….. the people of Urartu called themselves Khaldini after their god Khaldi. Boris Piotrovsky wrote that "the Urartians first appear in history in the 13th century B.C. as a league of tribes or countries which did not yet constitute a unitary state…..In the early 6th century BC, the Urartian Kingdom was replaced by the Orontid dynasty. In the trilingual Behistun inscription, carved in 521/0 BC by the order of Darius the Great of Persia, the country referred to as Urartu in Assyrian is called Arminiya in Old Persian and Harminuia in Elamite…..Archaeological sites within its boundaries include Altintepe, Toprakkale, Patnos and Cavustepe. Urartu fortresses included Erebuni (present day Yerevan city), Van Fortress, Argishtihinili, Anzaf, Cavustepe and Başkale, as well as Teishebaini (Karmir Blur, Red Mound) and others….. in 1989 Ayanis, a 7th-century BC fortress built by Rusas II of Urartu, was discovered 35 km north of Van. In spite of excavations, only a third to a half of the 300 known Urartian sites in Turkey, Iran, Iraq, and Armenia have been examined by archaeologists (Wartke 1993). Without protection, many sites have been plundered by local residents searching for treasure and other saleable antiquities"…..http://en.wikipedia.org/wiki/Urartu 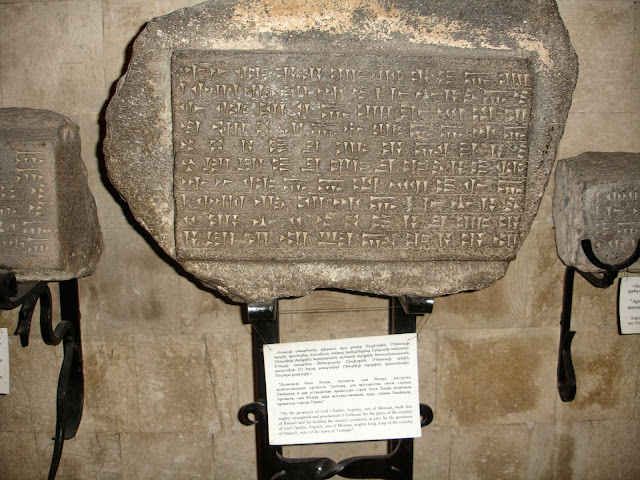 "With the expansion of Urartian territory, many of the gods worshiped by conquered peoples were incorporated into the Urartian pantheon……examples of incorporated deities are the goddesses Bagvarti (Bagmashtu) and Selardi. On Mheri-Dur, or Meher-Tur (the "Gate of Mehr"), overlooking modern Van, an inscription lists a total of 79 deities, and what type of sacrificial offerings should be made to each; goats, sheep, cattle, and other animals served as the sacrificial offerings. Urartians did not practice human sacrifice."…..http://en.wikipedia.org/wiki/Urartu 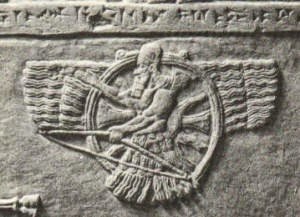 "Ḫaldi (dḪaldi, also known as Khaldi or Hayk) was one of the three chief deities of Ararat (Urartu). His shrine was at Ardini. The other two chief deities were Theispas of Kumenu, and Shivini of Tushpa……Of all the gods of Ararat (Urartu) panthenon, the most inscriptions are dedicated to him. His wife was the goddess Arubani. He is portrayed as a man with or without a beard, standing on a lion……Khaldi was a warrior god whom the kings of Urartu would pray to for victories in battle. The temples dedicated to Khaldi were adorned with weapons, such as swords, spears, bow and arrows, and shields hung off the walls and were sometimes known as 'the house of weapons'."….http://en.wikipedia.org/wiki/Khaldi_(god)

"Theispas (also known as Teisheba or Teišeba) of Kumenu was the Araratian (Urartian) weather-god, notably the god of storms and thunder. He was also sometimes the god of war. He formed part of a triad along with Khaldi and Shivini. The ancient Araratian cities of Teyseba and Teishebaini were named after Theispas. He is a counterpart to the Assyrian god Adad, and the Hurrian god, Teshub. He was often depicted as a man standing on a bull, holding a handful of thunderbolts. His wife was the goddess Huba, who was the counterpart of the Hurrian goddess Hebat."

"Tushpa (Armenian: Տոսպ Tosp, Assyrian: Turuspa, Turkish: Tuşpa) was the 9th-century BC capital of Urartu, later becoming known as Van which is derived from Biaina the native name of Urartu….Archaeological excavations and surveys carried out in the Van Province indicate that the history of human settlement in this region dates back at least as far as 5000 BC. The Tilkitepe Mound located along the shores of Lake Van and a few kilometres to the south of the citadel of Van, is the only the known source of information about the oldest cultures of Van predating the founding of Tushpa….

Kala Van......The Fortress of Van (Armenian: Վանի Բերդ, also known as Van Citadel, Turkish: Van Kalesi or Kurdish: Kela Wanê) is a massive stone fortification built by the ancient kingdom of Urartu during the 9th to 7th centuries BC, 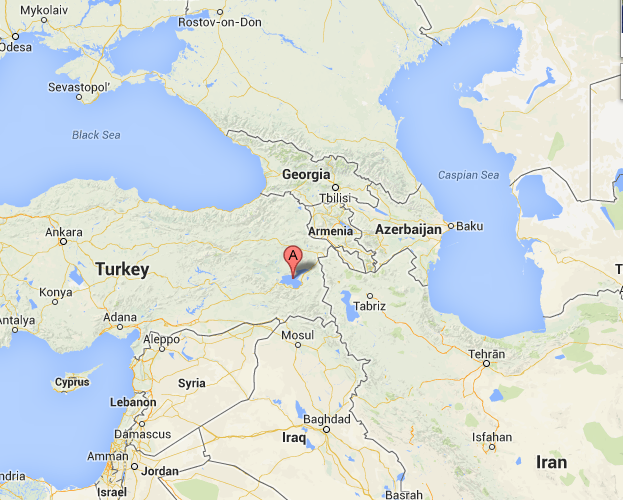 "The religion of Urartu was the religion of a large kingdom, and it follows normal structures for other larger contemporary religious systems: A polytheistic pantheon where different gods had their separate cult centres. Gods were associated with, and ruled over certain natural powers, but they needed not be confined by this. Possibly inspired by other religious systems, Urartian religion had a sort of triad, or a theology of three main gods: Shivini, Theispas and Khaldi....These three gods were gods of the basic interests of a society like Urartu was: sun; storm and thunder (hence rain); and war. Gods were depicted in an anthropomorphic manner....Apparently, the most important god was the warrior god, Khaldi; temples to him were built into many royal palaces and the king was also Khaldi's high priest. Still, the other gods may have been considered higher than Khaldi must have been with the Urartian warrior elite."....http://i-cias.com/e.o/urartu.religion.htm

"Urartian castles. In the 9th and 8th centuries B.C. Urartian builders made fundamental contributions to the development of fortress architecture in the Near East. They adapted Mesopotamian fortification methods to the landscape of their own settlement area, the so-called Armenian highlands, but a further advance can also be observed. In this early period Urartian fortresses were erected without regard to the natural terrain, according to a predetermined plan, so that heavy walls and high terraces were frequently necessary. Plain facades predominated, buttressed and defended by massive towers at the corners and along the walls, as at Qaḷʿa-ye Sīāh (Figure 3e), a castle constructed on a flat lava field 36 km east of Māku (Kleiss, 1973)."....http://www.iranicaonline.org/articles/castles