'The Letter 'A'. ……The earliest certain ancestor of "A" is aleph (also called 'aleph), the first letter of the Phoenician alphabet…. the origin of aleph may have been a pictogram of an ox head in proto-Sinaitic script influenced by Egyptian hieroglyphs, styled as a triangular head with two horns extended…..This letter of ours corresponds to the first symbol in the Phoenician alphabet and in almost all its descendants. In Phoenician, a, like the symbols for e and for o, did not represent a vowel, but a breathing…..the vowels originally were not represented by any symbol. When the alphabet was adopted by the Greeks it was not very well fitted to represent the sounds of their language. The breathings which were not required in Greek were accordingly employed to represent some of the vowel sounds, other vowels, like i and u, being represented by an adaptation of the symbols for the semi-vowels y and w. The Phoenician name, was taken over by the Greeks in the form Alpha (alpsa)…"…..http://en.wikipedia.org/wiki/A

"Indian documents written in Kharosthi with ink have been unearthed in Chinese Turkestan……The Kharoṣṭhī script is an ancient Indic script used by the Gandhara culture of ancient Northwest India (primarily modern-day Afghanistan, Pakistan and North India) to write the Gāndhārī language (a dialect of Prakrit) and the Sanskrit language. An alphasyllabary, it was in use from the middle of the 3rd century BCE until it died out in its homeland around the 3rd century CE. It was also in use in Bactria, Gandhara (particularly in the period of the Kushan Empire), Sogdiana (see Issyk kurgan) and along the Silk Road, where there is some evidence it may have survived until the 7th century in the remote way stations of Khotan and Niya.."….http://depts.washington.edu/silkroad/texts/niyadocts.html 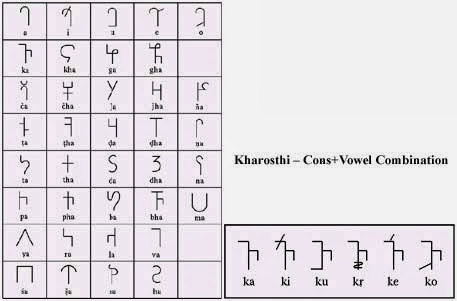 The Kharosthi Script was almost contemporarily with the Brahmi....Appeared by 3rd c. BC in northern Pakistan and east Afghanistan.

"In the earliest of the Phoenician, Aramaic and Greek inscriptions …..the oldest Phoenician dating about 1000 B.C., the oldest Aramaic from the 8th, and the oldest Greek from the 8th or 7th century B.C."….http://en.wikipedia.org/wiki/A

Sanskrit…."The letter A - अ….the sanskrit language's alphabet is very scientifically arranged. it shows the deep understanding of linguistics as early as 500BC (pANini's time) but the alphabet might have been in this order even in vedic times, which might push it another 1-2 thousand years back…'a' is also a word in itself. the word 'a' (just the vowel), implies viShNu…the sacred 'om' is made up of a+u+m [a + u = o] and….. a stands for viShNu……. u stands for maheshwara (shiva)…….m stands for brahmaa.,,,,, thus praNava (om) is trifold."…..…http://blog.practicalsanskrit.com/2010/02/meet-alphabet-letter.html

"Calligraphy (from Ancient Greek: κάλλος kallos "beauty" and γραφή graphẽ "writing") is a visual art related to writing. …..Western calligraphy is recognizable by the use of the Latin script. The Latin alphabet appeared about 600 BC, in Rome…..

....…… Normally the brush is made from goat, Siberian Weasel (黄鼠狼 huángshǔláng, Yellow-rat-wolf), pig, mouse, buffalo, wolf and rabbit hair, while exotic ones can be made from tiger, fowl, deer and even human hair (from the first haircut a baby gets, said to bring good fortune while taking the Imperial examinations)…..The earliest intact ink brush was found in 1954, in the tomb of a Chu citizen during the Warring States period (475-221 BC), located in an archaeological dig site Zuo Gong Shan 15 near Changsha (長沙). This primitive version of an ink brush had a wooden stalk, and a bamboo tube secures the bundle of hair to the stalk….Traces of the writing brush, however, were discovered on the Shang jades, and were suggested to be the grounds of the oracle bone inscriptions.."……Cambridge History of Ancient China, 1999:108

"In ancient China, the Jiǎgǔwén characters carved on ox scapula and tortoise plastrons showed no indication of stroke order. The characters show huge variations from piece to piece, sometimes even within one piece. During the divination ceremony, after the cracks were made, the characters were written with a brush on the shell or bone (to be carved in a workshop later). Although the brush-written stroke order is not discernible after carving, there exists some evidence that it was not entirely idiosyncratic….As a general rule, strokes are written from top to bottom and left to right."….http://en.wikipedia.org/wiki/Stroke_order

"The history of Chinese inks can be traced back to the 23rd century BC, with the utilization of natural plant (plant dyes), animal, and mineral inks based on such materials as graphite that were ground with water and applied with ink brushes. Evidence for the earliest Chinese inks, similar to modern inksticks, is around 256 BC in the end of the Warring States period and produced from soot and animal glue…. The best inks for drawing or painting on paper or silk are produced from the resin of the pine tree….The India ink used in ancient India since at least the 4th century BC was called masi, and was made of burnt bones, tar, pitch, and other substances." 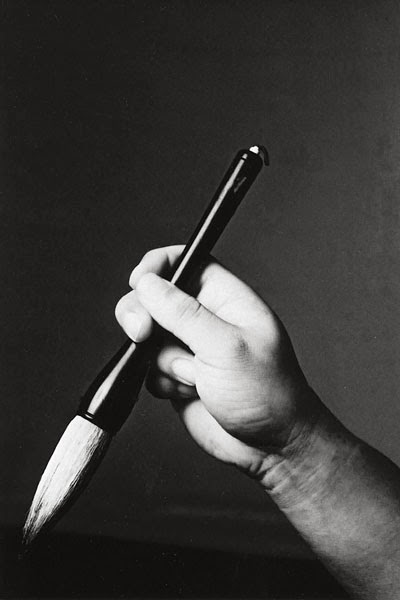 "Ashe is a Tibetan term used in Shambhala. It is described by the Shambhala Training web site as "a principle and practice". As the latter, it is described as "a simple and powerful practice that enables one to transform confusion and hesitation into wisdom and authenticity." It is also the name of a calligraphic symbol seen at Shambhala centers, which looks like a single black or white vertical stroke with a slight adornment at the top and bottom…..Details about the term as both a principle and practice are not published publicly. Students are more formally introduced to these teachings at the Warrior Assembly retreat."…..http://labelingthoughts.org/wiki/Ashe