Second Propagation…..(Tibetan, phyi-dar). "The second period of the organized dissemination of Buddhist teachings and texts in Tibet during the 11th century…... The Nyingma tradition maintains the teaching cycles and texts that were introduced during the earlier dissemination, or ngadar (snga dar) at the height of Tibet’s imperial power. This is in contrast to the various so-called new, or sarma (gsar ma) schools (Kadam, Kagyu, Gelug, etc) that adhere to texts and teachings that were introduced during the later phase of dissemination, or chidar (phyi dar), from the late tenth century onward."… http://www.treasuryoflives.org/foundations/view/7

"Butön’s foray into editorship, for which he may be best known in modern times. Butön made enormous effort to determine precisely what should and should not be included in the Tibetan canon, excluding (controversially) everything without a persuasive Indian pedigree"….https://tibetan-biographies.wikischolars.columbia.edu/A+brief+biography+of+Buton+Rinchen+Drub

Buton Rinchen Drub (Tibetan: བུ་སྟོན་རིན་ཆེན་གྲུབ་, Wylie: Bu-ston Rin-chen Grub), (1290-1364), 11th Abbot of Shalu Monastery, was a fourteenth-century Sakya master and Tibetan Buddhist leader…..Buton was born in 1290, "to a family associated with a monastery named Sheme Gomne (shad smad sgom gnas) in the Tropu (khro phu) area of Tsang ... [his] father was a prominent Nyingma Lama named Drakton Gyeltsen Pelzang (brag ston rgyal btshan dpal bzang, d.u.). His mother, also a Nyingma master, was called Sonam Bum (bsod nams 'bum, d.u.)."…..Buton catalogued all of the Buddhist scriptures at Shalu, some 4,569 religious and philosophical works and formatted them in a logical, coherent order. He wrote the famous book, the History of Buddhism in India and Tibet at Shalu which many Tibetan scholars utilize in their study today…..After his death he strongly influenced the development of esoteric studies and psychic training in Tibet for centuries. The purpose of his works were not to cultivate paranormal magical abilities but to attain philosophical enlightenment, a belief that all earthly phenonoma are a state of the mind. He remains to this day one of the most important Tibetan historians and Buddhist writers in the history of Buddhism and Tibet…..http://en.wikipedia.org/wiki/Buton_Rinchen_Drub

"Buton famously excluded from his Kangyur the Nyingma tantras, which he considered to be inauthentic, which is to say, not the words of the Buddha. This claim was based on the inconsistently invoked Tibetan standard by which a purportedly translated scripture was deemed authentic only when an Indic original was attested. Both Tibetan and western scholars have suggested that Buton, working in an era of institutional prejudice against the Nyingma tradition, used the standard selectively. For example, despite its continued importance in his own Sakya tradition and the existence of Sanskrit material attesting to its Indic origin, he excluded the Vajrakīla, a tantric system that dated back to Imperial times which was regarded by some partisans as belonging to a corrupted Nyingma tradition. In the Blue Annals Go Lotsāwa Zhonnu Pel ('gos lo tsA ba gzhon nu dpal, 1392-1481) criticized Buton for excluding the Guhyamūla Tantra from the Kangyur, despite the fact that he did include in the Tengyur Vajrahāsa's Guhyasamājaṭīka, which quotes extensively from that tantra."….http://www.treasuryoflives.org/biographies/view/Buton-Rinchen-Drub/2845

Butön Rinchen Drup (Wyl. bu ston rin chen grub) (1290-1364) — a great scholar of the Sarma tradition who compiled the Tibetan Buddhist canon (Kangyur). His lineage is called Shalupa after the name of the place where he mostly resided, Shalu Monastery, near Shigatsé in Central Tibet. His personal writings include a celebrated history of Buddhism (Wyl. bu ston chos byung)…..Bu sTon, History of Buddhism in India and Tibet, translated by E. Obermiller, Sri Satguru, 1932

Sarma (Wyl. gsar ma) — the New Schools of Tibetan Buddhism which followed the later translations made from the time of the great translator Rinchen Zangpo (958-1055) onwards, i.e. Kagyü, Sakya and Gelug.

"Kālachakra practice today in the Tibetan Buddhist schools[e…..Buton Rinchen had considerable influence on the later development of the Gelug and Sakya traditions of Kālachakra, and Dolpopa on the development of the Jonang tradition on which the Kagyu, Nyingma, and the Tsarpa branch of the Sakya draw. The Nyingma and Kagyu rely heavily on the extensive, Jonang-influenced Kālachakra commentaries of Ju Mipham and Jamgon Kongtrul the Great, both of whom took a strong interest in the tradition. The Tsarpa branch of the Sakya maintain the practice lineage for the six branch yoga of Kālachakra in the Jonang tradition…..There were many other influences and much cross-fertilization between the different traditions, and indeed His Holiness the Dalai Lama has asserted that it is acceptable for those initiated in one Kālachakra tradition to practice in others…..http://en.wikipedia.org/wiki/Kalachakra

"Another understated aspect of Butön’s career, though perhaps only from a much later perspective, is attitude toward the controversial other-emptiness view associated with the tathatgatagarbha and Kalachakra literatures. Butön was a well known critic of this view, which became a major point of contention in the decades following…..https://tibetan-biographies.wikischolars.columbia.edu/A+brief+biography+of+Buton+Rinchen+Drub

Zhalu Monastery……Situated between Zhikatsé (gzhis ka rtse) to the northwest and Gyantsé (rgyal rtse) to the southeast, Zhalu Monastery (zhwa lu dgon) has played an important role in the cultural life of Tsang (gtsang) since at least the fourteenth century. Renowned for both its artistic and literary achievements, it was home to Nepalese artisans painting murals, teams of scribes creating fine volumes of Buddhist canonical literature, and a lively community of scholars, monks, and yogic practitioners from throughout Tibet…..http://places.thlib.org/features/22253/descriptions/1302

"…..we spent a day at Zhalu Monastery, the home of the fourteenth century Kalachakra master Buton Rinchen Drup. In addition to the extraordinary mandala wall murals that we viewed in depth, we were privileged to gaze in awe at Buton's personal meditation statue of the Kalachakra while considering its symbolism……http://www.jonangfoundation.org/blog/kalachakra-tibet-pilgrimage 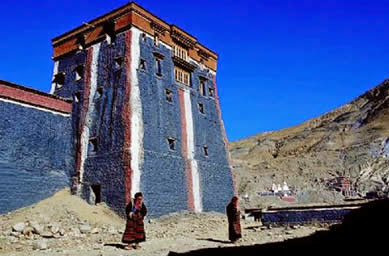 Shalu Monastery (Tibetan: ཞྭ་ལུ།, Wylie: Zhwa-lu, ZYPY: Xalu; simplified Chinese: 夏鲁寺; traditional Chinese: 夏魯寺; pinyin: Xiàlǔ Sì) is small monastery 22 km south of Xigazê in Tibet. Founded in 1040 by Chetsun Sherab Jungnay, for centuries it was renowned as a centre of scholarly learning and psychic training and its mural paintings were considered to be the most ancient and beautiful in Tibet. Shalu was the first of the major monasteries to be built by noble families of the Tsangpa during Tibet's great revival of Buddhism, and was an important center of the Sakya tradition......In 1329 a devastating earthquake demolished the temple of Shalu but was later rebuilt in 1333 by local lords under the command of the Mongol Emperor of China. The new architectural framework of the monastery was dominated by Mongolian styles with massive inward-sloping walls around a main courtyard and strong woodwork and glazed roof tiles from Qinghai. At the time of the new establishment in the 1330s, Shalu Temple was under the command of the 11th Abbot Buton Rinchen Drub, who lived 1290–1364. Buton was not merely a capable administrator but he is still remembered to this very day as a prodigious scholar and writer and is Tibet's most celebrated historian. Buton catalogued all of the Buddhist scriptures at Shalu, some 4,569 religious and philosophical works and formatted them in a logical, coherent order. He also wrote there the famous History of Buddhism in India and Tibet which many Tibetan scholars use in their study today."