The Avestan-Language and Bactrian Sanskrit...2500 BC 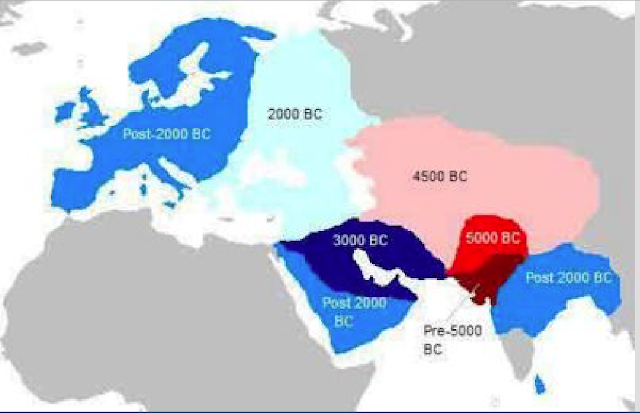 Map showing the spread of the Proto-Indo-European language (c. 5000 BC)

….."Recent Archeological unearthings of Sanskrit inscriptions attest to the prevalence of the Sanskrit alphabet in Afghanistan. Some later Sanskrit inscriptions in late Brahmi of about around the fifth to eighth centuries have also been found in Afghanistan in recent decades. Worthy of note are the Dilberjin fresco inscriptions (Drevniaia Baktriia); the Gardez inscriptions on an image of Ganesa; and the Uma Maheshvara image inscriptions from Tapa Skandar. Several Buddhist inscriptions of this period with the Buddhist creed on votive clay tablets have also been discovered at Ghazni[….The Kushans employed Sanskrit abundantly for use in Buddhist literary texts, as is evident from epigraphic evidence. The presence of Buddhist literary texts in Sanskrit of the Kushan period goes hand in hand with the codification of the Sanskrit canon of the of the Sarvastivada school in Kashmir at the Buddhist council in the time of Kanishk…..Historians attest the largest population of the region including Bactria spoke vernacular dialects of Sanskrit."… The Silk Road in World History, Xinru Liu, Oxford University Press, p.46 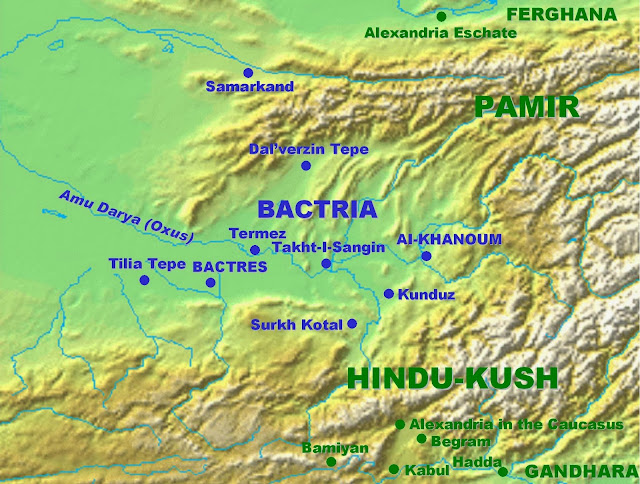 Tepe Skandar….(Tapa Iskander, Tapa Skandar, Qal'a-i Rajput)…. 31 kilometers north of Kabul, Late Sassanian-Turki Shahi, late 6th-early 9th century…."A large mound measuring 440 x 280 meters in area. It consists of two sanctuaries, a fort and several small shrines, one of them containing a fire altar. One of the most important finds is a marble Hindu statue of Uma Maheshvara, which has a Sanskrit inscription on its base. Other finds include coins, sculpture and miscellaneous artifacts…..Just north of the village Qala Murad Beg"…….N. Dupree, An Historical Guide to Afghansitanhttp://www.cemml.colostate.edu/cultural/09476/afgh05-206.html

"Tapa Iskander (Higuchi, 1970 to date) may be seen on a mound in the middle of the plain to the right of the road. From the 7th–9th centuries A.D., this was an important Hindu Shahi complex with both secular and religious buildings. A superb marble statue of Umamaheśvara, the Hindu god Śiva and his consort, from Tapa Iskander exhibits stylistic similarities with the sculptured marble piece from Khair Khana. The Hindu Shahi period is one of the least documented periods in Afghan history. Beautiful sculpture has been found accidentally from time to time over the years, but the scientific excavation of Tapa Iskander promises to shed welcome light into the murky corners of this fascinating transitional period……Those with a keen eye may also make out a Buddhist stupa in a draw high above the excavation mound. There are many Buddhist sites scattered throughout the Koh Daman dating from the 2nd to the 4th centuries AD when this valley was on the caravan highway known as the Silk Route along which Buddhism travelled from its homeland in India into Central Asia. Many local princes converted to Buddhism and thousands of pilgrims from Central Asia and China stayed at Buddhist monasteries strategically located along their route."……..Source: Warwick Ball, Archaeological Gazetteer of Afghanistan, 1982, n. 1185 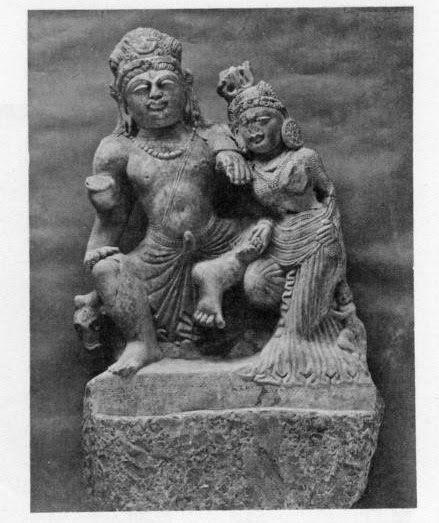 "Dilberjin....the National Museum Kabul has been the repository for many of the most spectacular archaeological finds in the country. These include the painted frescos from Dilberjin.....As to the site of Dilberjin (also spelt as Delbarjin, Dilberdjin), it is known that the Kushanas brought Buddhism to the city, building stupas and painting the walls with Buddhist motifs. As they penetrated India, they added Hindu (Shaivite) motifs. One of the murals adorning the main temple at the excavated site represents Shiva with his consort, Parvati, on his knee, sitting by the bull Nandi:..... 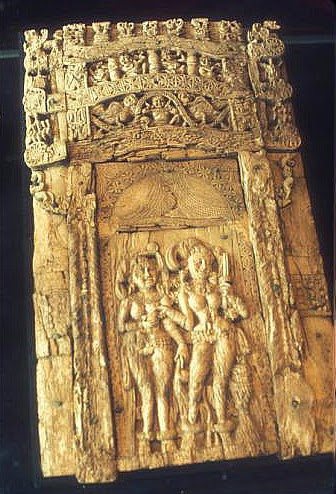 "Bactria was the homeland of Aryan tribes who later moved south-west into Iran, South Afghanistan, North Pakistan and North-Western India around 2500-2000 BC Later it became the north province of the Persian Empire in Central Asia.(Cotterell, 59) It was in these regions, where the fertile soil of the mountainous country is surrounded by the Turanian desert, that … Avestan, the language of the oldest portions of the Zoroastrian Avesta, was once called "old-iranic" which is related to Sanskrit. Today some scholars believe the Avestan-Language was the western dialect of the Sanskrit because both languages are the oldest Indo-Iranian language of Aryans we know. With the time the Avestan-Language became developed by own western style….Bactria was bounded on the south by the ancient region of Gandhara. The Bactrian language is an Iranian language of the Indo-Iranian sub-family of the Indo-European family."

Bactrian was probably spoken by the local populations of Bactria when Alexander the Great invaded the area around 323 BCE, inaugurating a two-century period of Hellenistic rule by the Seleucid Empire and the then the Greco-Bactrian kingdom…..Greek rule ended around 123 BCE with the invasions of the Yuezhi ( Kushans) from the North, who adopted the Greek alphabet to write the local Bactrian language, a case which is unique among Iranian languages. Before that time, Bactrian was written in the Aramaic alphabet…..Bactrian seems to have been, together with Greek, the official language of the Kushans, descendant of the Yuezhi, and was used in their coins and inscriptions. In 1993, the Bactrian Rabatak inscription was discovered, recording that under the Kushan king Kanishka (c. 120 CE), use of the Greek language was officially discontinued. The territorial expansion of the Kushans helped propagate Bactrian to Northern India and parts of Central Asia, as far as Turfan where Buddhist and Manichean inscriptions in Bactrian can be found."….http://lukferi.webs.com

"Due to the similarity between early Avestan and Sanskrit (and other related early Indo-European languages such as Latin and Ancient Greek), it is believed that the split between the Iranian and Indo-Aryan tribes had taken place at least by 1000 BC. There are striking similarities between the Eastern Iranian language of Avestan and Sanskrit, which may support the notion that the split was contemporary with the Indo-Aryans living in Afghanistan at a very early stage. Also, the Avesta itself divides into Old and New sections and neither mention the Medes who are known to have ruled Afghanistan starting around 700 BCE. This suggests an early time-frame for the Avesta that has yet to be exactly determined as most academics believe it was written over the course of centuries if not millennia. Much of the archaeological data comes from the Bactria-Margiana Archaeological Complex (BMAC) that probably played a key role in early Iranic civilization somewhere between Oxus and Indus River. Afghanistan."….http://lukferi.webs.com

"According to most historians, the Rigveda was composed in the ancient homeland of the Aryans, Afghanistan. The language of the ancient Afghans was Brahmui which is very similar to the language of the Vedas. References of the Pashtoon people and the Afghan rivers are found in the Rigveda. The rivers which are today known as Aamu, Kabul, Kurram, Ranga, Gomal and Harirudh were known to the ancient Indians as Vakshu, Kubha, Krum, Rasaa, Gomati, Haryu respectively. The places which are now called Kabul, Kandhar, Balkh, Wakhan, Bagram, Pameer, Badkhasha, Peshawar, Swat and Charsadda are referred to in Sanskrit and Pali literature as Kuhka, Gandhar, Bahlik, Vokkan, Kapisha, Meru, Kamboj, Purushpur, Suvastu and Pushkalavati respectively. Gandhari, the devoted wife of King Dhritrashtra of Hastinapur (now Delhi), Panini, the great Sanskrit grammarian and Guru Gorakhnath were all Pathans. Takshshila, which is believed to be the first university in the world was established in 600 BC....Taxila (Urdu: ٹيڪسيلا‎) is a town and an important archaeological site in Rawalpindi district of Pakistan."….….http://lukferi.webs.com