"Bakhdhi is the fourth nation in the Avestan Vendidad's list of nations - Airyana Vaeja (homeland of the Aryans) being the first. Bakhdhi is the ancient Avestan name while Balkh is the modern name for both the region and its old capital city….During the middle period of Aryan history - as the Aryans moved west from Airyana Vaeja towards present day Iran - Bakhdhi (Balkh as its is known today) became the principle kingdom of the Aryan confederation of kingdoms called Airan, and the eponymous city of Balkh was its capital. As the seat of Aryan rule moved westward to what is the Iranian province of Khorasan today, Balkh became part of greater Khorasan and remained an important regional capital as well as a cultural and trading centre. ….http://www.heritageinstitute.com/zoroastrianism/balkh/ 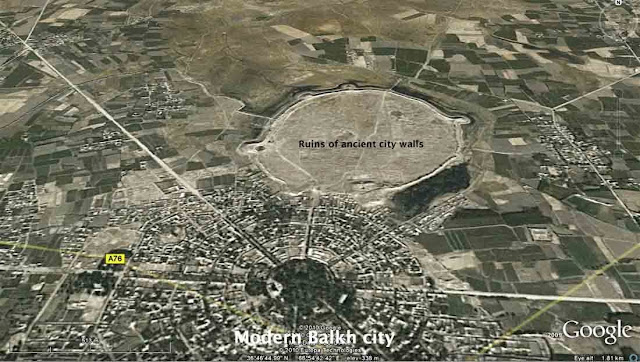 "The Kingdom of Bactria was renowned through the known world for it beauty, abundant crops, and a large variety of fruits. There are several almond and apricot orchards. While certain parts of Balkh are still relatively fertile, war and poor leadership has reduced the once famed land to a dusty shadow of its former self."….http://www.heritageinstitute.com/zoroastrianism/balkh/

"Bakhdhi would come to be known as Bakhtrish during Achaemenian times (675 - 330 BC), Bactra city and greater Bactria from the Greek version of its name during Alexander's and the Seleucid occupation (330 - c. 246 BC), and briefly Takharistan or Toharistan after the overthrow of the Seleucids. In 246 BCE, allied with Parthava (Parthia), Bakhdhi (Balkh) was one of the first Aryan nations to revolt against Seleucid rule. The "great and noble city" as Marco Polo called it, was destroyed by first by the Arabs and eventually by Mongols in 1220CE. Today, the site of the kingdom and its ancient city is called Balkh, and the once mighty kingdom has been reduced to the fairly small province in Afghanistan. Balkh's provincial capital is now Mazar-e Sharif, a city some twenty kilometres east of Balkh city. Our discussion on Bakhdhi includes the Greater Bakhdhi lands."…http://www.heritageinstitute.com/zoroastrianism/balkh/ 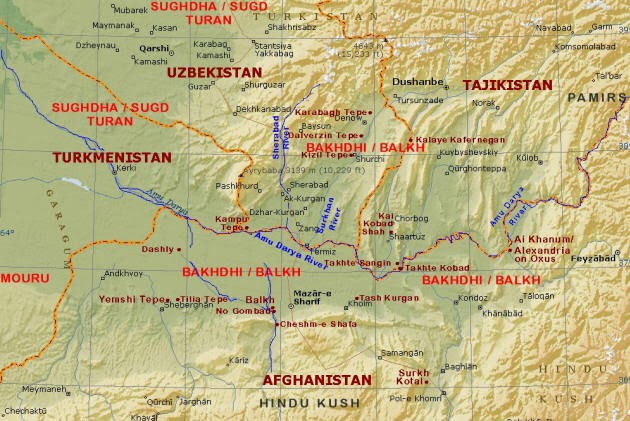 Kayanian Dynasty…"Balkh's King Vishtasp (in later language, Gushtasp), a king of the Kayanian dynasty, was a contemporary of Zarathushtra. Vishtasp accepted Zarathushtra's teachings and became the patron king and defender of Zarathushtra's Mazdayasni faith. ..The founder and first king of the Kayanian dynasty was Kai Kobad (also spelt Kay Qobad or simply Kaikobad) known to the Zoroastrian scriptures, the Avesta, by his older name Kavi Kavata. On the north Tajikistan bank of the Amu Darya River, close to the archaeological site of Takht-e Sangin, is a site called Takht-e Kobad meaning the throne of Kobad. About 40 km to the north along the banks of a tributary of the Amu Darya lies another site called Kai Kobad Shah meaning King Kai Kobad. We are not aware of any other region that ties itself so directly with the Kayanians. ….."….http://www.heritageinstitute.com/zoroastrianism/balkh/

Bukkara….Bukhara (Uzbek: Buxoro; Persian: بخارا‎; Russian: Бухара Bukhara; Turkish: Buhara), from Sanskrit vihara or Soghdian βuxārak ("lucky place"), is the capital of the Bukhara Province (viloyat) of Uzbekistan…..Located on the Silk Road, the city has long been a center of trade, scholarship, culture, and religion. ….Bukhara has been one of the main centres of World Civilization from its early days in 6th century BCE. From the 6th century CE, Turkic speakers gradually moved in. Its architecture and archaeological sites form one of the pillars of Central Asian history and art. The region of Bukhara was a part of the Persian Empire for a long time. The origin of many of its current inhabitants goes back to the period of Aryan immigration into the region….http://en.wikipedia.org/wiki/Bukhara

Markanda……Samarkand (Uzbek: Samarqand Самарқанд; Persian: سمرقند‎; Russian: Самарканд from Sogdian: "Stone Fort" or "Rock Town"; Mongolian: Самарканд from "Nut Rock" or "Hard Rock"), alternately Samarqand or Samarcand is the second-largest city in Uzbekistan and the capital of Samarqand Province. The city is most noted for its central position on the Silk Road between China and the West….Sanskrit texts, the original name of Samarkand was "Markanda", named after the Vedic saint of the same name - Markanda. The Greeks later referred to the city as Maracanda, which is a corruption of its former Sanskrit name…Along with Bukhara, Samarkand is one of the oldest inhabited cities in the world, prospering from its location on the trade route between China and the Mediterranean (Silk Road). At times Samarkand has been one of the greatest cities of Central Asia......http://en.wikipedia.org/wiki/Samarkand 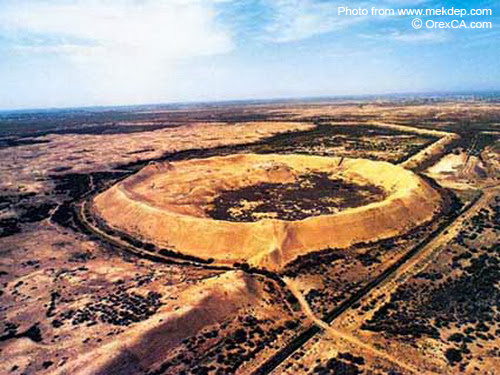 Mouru……. The kingdom of Mouru (Merv) lay to Bakhdhi's northwest and west….(Turkmen: Merw, Persian: مرو‎ Marw), formerly Achaemenid Satrapy of Margiana, and later Alexandria and Antiochia in Margiana (Greek: Αντιόχεια της Μαργιανής), was a major oasis-city in Central Asia, on the historical Silk Road, located near today's Mary in Turkmenistan. Several cities have existed on this site, which is significant for the interchange of culture and politics at a site of major strategic value. It is claimed that Merv was briefly the largest city in the world in the 12th century…Merv's origins are prehistoric: archaeological surveys have revealed many traces of village life as far back as the 3rd millennium BC and that the city was culturally part of the Bactria-Margiana Archaeological Complex. Under the name of Mouru, Merv is mentioned with Balkh in the geography of the Zend-Avesta (Sīstān/Arachosia, Herat, Merv and Bactria)…… Under the Achaemenid dynasty Merv is mentioned as being a place of some importance: under the name of Margu it occurs as part of one of the satrapies in the Behistun inscriptions (ca. 515 BC) of the Persian monarch Darius Hystaspis. The first city of Merv was founded in the 6th century BC as part of the expansion into the region by the Achaemenid Empire…. of Cyrus the Great (559–530 BC), but the Achaemenid levels are deeply covered by later strata at the site...http://en.wikipedia.org/wiki/Merv

"History very literally flows through and around Bakhdhi. The central portion of a river famous in legend and history, the Amu Darya River - the section that is downstream from the Sherabad River - formed the border between Bakhdhi and Sughdha (the second ) in the northwest of Bakhdhi. The upper part of the Amu Darya River - upstream from the Sherabad River - ran through the heart of eastern Bakhdhi until it entered the Badakhshan / Pamir region. Across the Amu Darya, the kingdom of Sugd lay to the north, while the Badakhshan region and Pamir mountains lay to the east and northeast. The kingdom of Mouru (Merv) lay to Bakhdhi's northwest and west, and the kingdom of Haroyu (Harirud) lay across its south-western border. ….The southern and south-eastern borders of Bakhdhi was formed by the Hindu Kush (meaning Hindu killer) mountains. The name Hindu Kush leads us a believe that the fifteenth Avestan nation, Hapta Hindu, the seven Indus lands, lay across the Hindu Kush, the mountains forming the border between the two nations, and further that the relations between the two neighbours on either side of the Hindu Kush were not always peaceful."…..http://www.heritageinstitute.com/zoroastrianism/balkh/ 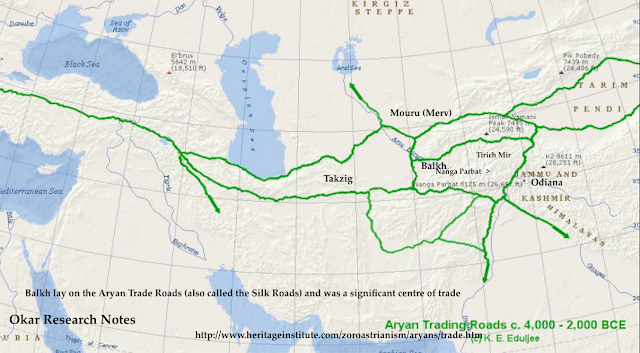 "Aryan Trade Roads ……The Aryans started trading between themselves in the expanded lands formed by their migrations very early in their history, and there is evidence of their trade during the Neolithic (new) Stone Ages, that is, towards the end of the Stone Age some 7,000 years ago… lapis lazuli played a very special and significant role, since the Pamir-Badakshan region was home to the only lapis mine known in those early days...….As with all the other Avestan Vendidad nations, Balkh lay on the Aryan Trade Roads (also called the Silk Roads) and was a significant centre of trade as well as caravan a stop over point. Balkh lay at the junction of the east-west route (between China and Asia Minor) and the north-south route between Merv, the northern lands beyond and India in the south. The route through Balkh was the preferred route for traders between the west and India as it was shorter and provided the easiest route through the Hindu Kush. "…..http://www.heritageinstitute.com/zoroastrianism/balkh/