The Heart……"Aham, the heart or "subjective I", is a central concept in Kaula ideology, conceived of as the most sacred reality, home of consciousness (Cit) and bliss (Ananda), place of union of the cosmic couple Shiva and Shakti. The term Aham refers to the same reality as other terms like anuttara (unsurpassed), Akula (beyond the group), Shiva (The Lord), Cit (supreme consciousness) as well as "feminine" aspects as Ananda and Shakti. Each term brings a specific viewpoint, but none of them can fully describe the Supreme Reality…..On the individual level, the heart is the binding force of all conscious experiences – the individual being is considered a Kula composed of eight elements: five senses, ego (ahamkar), the mind and the intellect. These eight are not disconnected, unrelated processes but rather a unified, interrelated family ("kaula") based on consciousness as the common substrate. Kaula prescribes practices that reintegrate the eight "rays" of the soul into the supreme consciousness…..On the cosmic level, the "Heart of the Lord" (aham) is the substrate of the family of 36 elements forming all manifestation. The concept of "Spiritual Heart" is so important that even the supreme realization in Kashmir Shaivism is described in relation to it. The so-called Kechari Mudra is an attitude described as "the ability of consciousness to freely move (charati) about in the space (kha) of the heart". ("kha"+"charati" forming "kechari")….http://en.wikipedia.org/wiki/Kaula#The_Heart

"Aham which means "I" in Sanskrit. Thus the absolute first creates the divine person, Aham, and from this divine person will appear the manifestation itself. Aham is identical to mātṛkā (the wheel of phonematic energies), essential nature of all categories from Pṛithvī tattva (earth) to Sadāśiva tattva,. Aham is the final resting place, dwelling place, abode of all beings, receptacle of the world.….Aham is formed of A+HA+M, a triad of Śhiva (A), Śakti (HA) and bindu (M)….. M is the final point, union of Śiva and Śakti, where they dissolve into Paramaśiva. The triangle of A+HA+M is the essence of the Trika system. A+HA+M form the sṛṣṭi bīja (seed of emission), a mantra that is identical to the energy of expansion and creation."…http://en.wikipedia.org/wiki/Kaula#The_Heart 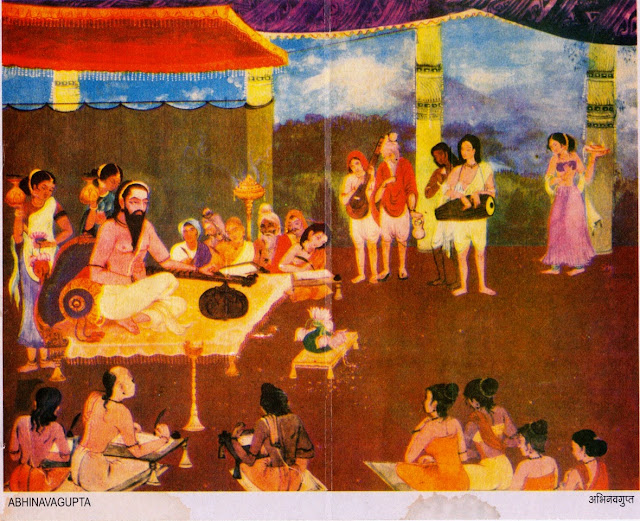 Muller-Ortega, Paul E. The Triadic Heart of Siva: Kaula Tantrism of Abhinavagupta in the Non-dual Shaivism of Kashmir……State University of New York, 1989……A study of the symbol of the heart, a central element in the work of Abhinavagupta…. great Kashmir sages like Abhinavagupta, Vasugupta, Utpaladeva, and Ksemaraja did not write for the scholars in academia. They wrote for the seekers of enlightenment….In this ultra-esoteric text, Professor Muller-Ortega considers the symbolism and function of the Heart (the Hridya, distinct from the anahata heart chakra) in the spiritual enlightenment process, as perceived within the tantric tradition of Kashmir Shaivism. When the Heart (immanent Consciousness, or Soul) is no longer contracted (by entangling thought-forms), then it radiates as Siva, en-Light-ened Consciousness. But for Siva to recognize himself and shine freely, the Heart-knot must be cut. And this "cutting" is precipitated by Grace, the descent of Divine Power (Shaktipat)….Kashmir Shaivism is a rich and intricate spiritual tradition, and Muller-Ortega's in-depth study of the Heart is a unique and wonderful consideration of this tradition……http://www.amazon.com/The-Triadic-Heart-Siva-Abhinavagupta/dp/0887067875

"Anuttara is the ultimate principle in Kashmir Shaivism. It is the fundamental reality underneath the whole Universe. Among the multiple interpretations of anuttara are: "supreme", "above all" and "unsurpassed reality".In the Sanskrit alphabet anuttara is associated to the first letter - "A" (in devanagari "अ"). As the ultimate principle, anuttara is identified with Śiva, Śakti (as Śakti is identical to Śiva), the supreme consciousness (cit), uncreated light (prakāśa), supreme subject (aham) and atemporal vibration (spanda)…..http://en.wikipedia.org/wiki/Nondualism

"Tantric Yoga : A Study of the Vedic Precursors, Historical Evolution, Literatures, Cultures, doctrines, and Practices of the 11th Century Kasmiri Saivite and Buddhist Unexcelled Tantric Yogas…… by James Francis Hartzell
…..Hartzell, like many other Kalacakra translators has his own theory of the location of Shambhala namely an area of Kashmir, and he suggests that both Kalacakra and Saivite tantras were practised in the same part of the world perhaps between the seventh and eleventh centuries CE, with some overlap and particularly with mutual awareness of the others existence. He explores the works of the Kalacakra scholar Abhayakaragupta and the Saivite scholar Abhinavagupta for much of his source materials, and then goes to their sources. He begins with a most interesting discussion of the Vedic worldview as a backdrop to both traditions…..http://kalachakranet.org/book_jh-tantricyoga.html

Abhayākaragupta (Wylie: 'jigs-med 'byung-gnas sbas-pa) was born in the city of Gaur, West Bengal, in Eastern India, and is thought to have flourished in the late 11th-early 12th century CE, and died in 1125.

Abhinavagupta (Sanskrit: अभिनवगुप्त) (c. 950 – 1020 AD) was one of Kashmir's greatest philosophers, mystics and aestheticians. He was also considered an important musician, poet, dramatist, exegete, theologian, and logician — a polymathic personality who exercised strong influences on Indian culture….Abhinavagupta was strongly influenced by Buddhist logic.

Bodhicitta….."Bodhi means our ‘enlightened essence’ and chitta (Skt. citta) means ‘heart’ or 'mind', hence the translation ‘the heart of enlightened mind’…..The Pali-English Dictionary suggests citta is heart / mind, and emphasizing it is more the emotive side of mind as opposed to manas as the intellect or mind-sense in the sense of what grasps mental objects (dhammas). Citta is the object of meditation in the third part of Satipatthana, also called four foundation of mindfulness"…..http://en.wikipedia.org/wiki/Citta

""The channel that goes from the heart to the eyes is called the "crystal kati channel"……Semde (Wylie: sems sde; Skt: cittavarga), the series of Mind, that focuses on the introduction to one's own primordial state;…..….The Golden Letters: The Three Statements of Garab Dorje, the First Teacher ...By Garab Dorje…translated by John Myrdhin Reynolds

"……a Sufi work on the stations of the heart .... The word “heart” is similar to the word “eye” ('ayn)….These elements, or stations (maq ̄am ̄at) in the terminology of the author, are the breast (.sadr), the heart proper (qalb), the inner heart (fu’ ̄ad) and the intellect (lubb). They are arranged in concentric spheres, the breast being the outermost sphere followed on the inside by the heart, the inner heart and the intellect. Within the intellect are yet other stations which, however, are too subtle to be described in words."…..…..http://faculty.washington.edu/heer/stations.pdf