The Nine Ways of Bon...Shamanic and Resultant Levels

According to the system of the lho-gter (Southern Treasure) the Nine Ways are:

1. Way of Prediction,….divination, astrology, ritual and examination of causes.
2. Way of Visible Manifestation….the origin and nature of gods and demons.
3. Way of Illusion….the rites for the dispersal of adverse thought forms, entities and energies.
4. Way of Existence….death rituals and the after-death state (bar-do) .
5. Way of a Lay Follower…..the principles for wholesome activity.
6. Way of the Sages…..the rules of monastic discipline.
7. Way of the White A…….practices and rituals of the higher practices.
8. Way of the Primordial Shen….the teacher, the practices, the mandala and instructions for deity meditation.
9. Way of Dzogchen….the path of Great Perfection. 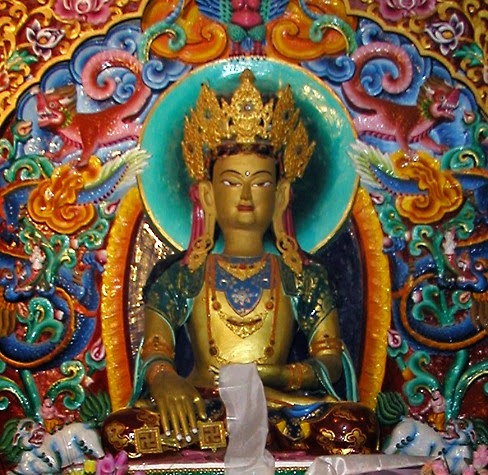 The first four levels of Bon are referred to as the Causal Vehicles, Causal Ways (rGyui-theg-pa) . They are the shamanic levels….

Chashen (The way of the Shen of Prediction)…. the first way, comprises medical diagnosis and healing, as well as various ancient divination and astrological rites performed by the shaman to determine whether the person who needs to be healed has an energetic imbalance, or is being provoked by a demonic spirit, or negative energy (as mentioned above). Nowadays these rites are still widely practised in Tibetan communitites.

Nangshen thegpa (sNang-gshen theg-pa), the Way of the Shen of Visible Manifestation, expounds the origin and nature of gods and demons living in this world and various methods of exorcism and ransom.

Nangshen (The Way of the Shen of the Visible World), ......The second way, Nangshen, comprises various rituals for purification to summon energy and enhance prosperity, to suppress and liberate negative forces, and to invoke and make offerings to powerful deities and pay ransoms to demonic spirits.

These practices are very widespread in Tibet. Families perform small ones, while large scale ones are usually performed collectively in towns, villages and monasteries. In ransom rites, an effigy is prepared which represents the beneficiary of the rite, or the shamanic practitioner who is performing it. I remember when my mother had been ill for a long time we tried to heal her by means of different medical treatments, but nothing helped. We then performed several minor rites, but these did not work either. So finally we invited some shaman monks, who performed a big ransom rite, in which they prepared a large effigy of her (in fact, people often make life-size effigies) and we dressed it in her clothes, so that it was very lifelike and resembled her closely. Then we performed the ritual, offering the effigy in her place to repay her karmic debt to spirits. She was given a new name, Yehe Lhamo, in place of her old name, Drolma, as a kind of new birth into the world, and she recovered from her illness. 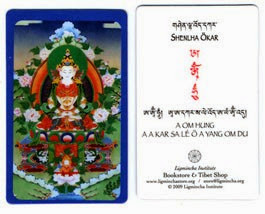 3. Way of Illusion ('Phrul-gshen theg-pa) explains the rites for the dispersal of adverse thoughtforms, entities and energies;

Trulshen (The Way of the Shen of 'Magical' Illusion).......Shamans of the third way, Trulshen, go where there is strong, wild energy, where they perform practices to conquer the spirits and demons that inhabit those places, subjugating them into their service. One achieves this through practising mantra (words of magic power), mudra (meaningful hand gestures to communicate with gods and spirits), and samadhi (meditation), while performing sadhanas (devotional practices) to engage various wrathful goddesses such as Walmo and Chenmo. The aim of these wrathful practices, which are directed against enemies of the teaching, are to protect the practitioners and the teaching against danger and threats. It is very important to perform these actions with an attitude of love and compassion towards other beings, and should not be performed solely for the shaman's benefit..

Sishen thegpa (Srid-gshen theg-pa), the Way of the Shen of Existence, deals with the after-death state (bar-do) and with methods for guiding sentient beings towards liberation or at least towards a better rebirth....

Working with the soul of the living and the dead, is the most important feature of the fourth way, Sichen, which contains a detailed explanation of the principle of the la (soul), yid (mind), and sem (thinking mind). "The la is the karmic trace, which is stored in the kunzhi namshe, (or base consciousness). The sem follows the karmic trace and produces blissful, painful and neutral experiences which are experienced by the yid."…..When a living person's soul is lost, shattered, or disordered, there are practices to recall and reinforce its energy, such as soul retrieval. In relation to the dead, there are explanations of 81 different types of death, such as accidental death, suicide, murder, and sinister death. …..Following these kinds of death, it is very important to perform appropriate rites, especially if the death occurs in a place which is energetically disturbed (for instance, a place where untoward events such as accidents regularly occur).

A particular specific method found in this way, is that of the 'four doors', to vanquish negative spirits, using 360 different methods. There are also funeral rites to guide the soul immediately after death, communicating with the ghost of the deceased and feeding it until its next rebirth. One of the most important practices performed by Tibetan shamans of the sichen path is soul retrieval - Lalu (literally redeeming, or buying back the soul), and Chilu, (redeeming the life-energy).

Genyen thegpa (dGe-snyen theg-pa), the Way of Virtuous Lay Practitioners, guides those who apply the ten virtues and ten perfections.

7.Way of Primordial Sound (Adkar theg-pa) charts the integration of an exalted practitioner into the mandala of highest enlightenment;

Akar thegpa (A-dkar theg-pa), the Way of the White A, explains the practices and rituals of the higher Tantras.....

8. Way of Primordial Shen, (Ye-gshen theg-pa) renders the guidelines for seeking a true tantric master and the samaya that binds a disciple to his tantric master; and in summation

Yeshen thegpa (Ye-gshen theg-pa), the Way of the Primordial Shen, stresses the need for a suitable teacher, place and occasion for Tantric practices, explains the mandala in greater detail as well as instructions for deity meditation.

Way of Supreme Doctrine or The Way of Dzogchen (Bla-med theg-pa) enshrines Dzogchen.

Lame thegpa (bLa-med theg-pa), the Unsurpassed Way, is concerned with the highest attainment through the path of Great Perfection (i.e., rDzogs-chen). 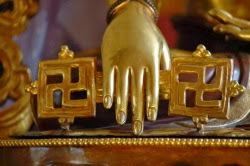 There are three biographies of Tonpa Shenrab. The earliest and shortest one is known as Dodu (mDo-'dus: 'Epitome of Aphorisms'); the second is in two volumes and is called Zermig (gZer-mig: 'Piercing Eye'). These two accounts were rediscovered as terma (see below) in the 10th and 11th centuries respectively. …..The third and largest is the twelve volume work entitled Zhiji (gZi-brjid: 'The Glorious'). This last book belongs to the category of scriptures known as Nyan gyud (bsNyan-rgyud: oral transmission), and was dictated to Londen Nyingpo (bLo-ldan snying-po) who lived in the 14th century.