"In paleoanthropology, the recent African origin of modern humans, frequently dubbed the "Out of Africa" theory, is the most widely accepted model describing the geographic origin and early migration of anatomically modern humans…..the 'Recent African Origin' (RAO) model concept was speculative until the 1980s, when it was corroborated by a study of present-day mitochondrial DNA, combined with evidence based on physical anthropology of archaic specimens."….McBride B, Haviland WE, Prins HEL, Walrath D (2009). The Essence of Anthropology. Belmont, CA: Wadsworth Publishing. p. 90. ISBN 978-0-495-59981-4.

"Coastal migration theory in Asia and Oceania….The coastal route is primarily used to describe the initial peopling of the Arabian peninsula, India, Southeast Asia, New Guinea, Australia, coastal China and Japan,and is linked with the presence and dispersal of mtDNA haplogroup M and haplogroup N, as well as the specific distribution patterns of Y-DNA haplogroup C and haplogroup D, in these regions.The theory proposes that humans, likely similar to the Negritos or Proto-Australoids of modern times, arrived in the Arabian peninsula from Africa, then on the southern coastal regions of the Indian mainland, followed by spread to the Andaman Islands and modern-day Indonesia, and thence branching southwards to Australia and northwards towards Japan. National Geographic's Genographic Project uses the term 'Coastal Clan' to describe the initial human groups of Y-DNA haplogroup C who expanded eastwards out from Africa along the coastal route around 50 thousand years ago...."…."The Genographic Project: Genetic Markers, Haplogroup D (M174)", National Geographic, 2008, "... Haplogroup D may have accompanied another group, the Coastal Clan (haplogroup C) on the first major wave of migration out of Africa around 50,000 years ago. Taking advantage of the plentiful seaside resources, these intrepid explorers followed the coastline of Africa through the southern Arabian Peninsula, India, Sri Lanka, and Southeast Asia. Alternatively, they may have made the trek at a later time, following in the footsteps of the Coastal Clan ..."

"The first migration from Africa was around the southern shores of the Arabian Peninsula and down the coast of India to the Kerala area on the western tip of South India, about 70,000 to 50,000 years ago. The oldest genetic person outside of Africa has been found in Kerala (Woods, Wells). In neighboring Tamil Nadu, geneticists testing DNA of local peoples, genes have been found from 50-60,000 years ago. In Kerala there are ancient Brahman chants (mantras) that appear to be unrelated to any known language (Woods). These chants have been passed down for centuries – precisely sounded and taught from one generation to another. They have patterns but no known meaning. The sounds and rhythms have been related to birds, perhaps from a time when our speech patterns evolved from animal sounds."…http://www.drsheedy.com/early-humans/up-to-12-000-years-ago.php

"By studying the DNA of an ancient people in Malaysia, a team of geneticists says it has illuminated many aspects of how modern humans migrated from Africa….The Orang Asli people, north of Kuala Lumpur, Malaysia, were studied by geneticists who traced their mitochondrial DNA from Africa….The geneticists say there was only one migration of modern humans out of Africa; that it took a southern route to India, Southeast Asia and Australia; and that it consisted of a single band of hunter-gatherers, probably just a few hundred people strong…Dr. Macaulay's team calculates that the emigration from Africa occurred 65,000 years ago, pushed along the coasts of India and Southeast Asia and reached Australia by 50,000 years ago, the date of the earliest known archaeological site there….."….http://www.nytimes.com/2005/05/13/science/13migrate.html?_r=0

"Genetic studies and fossil evidence show that archaic Homo sapiens evolved to anatomically modern humans solely in Africa, between 200,000 and 150,000 years ago, that members of one branch of Homo sapiens left Africa by between 125,000 and 60,000 years ago, and that over time these humans replaced earlier human populations such as Neanderthals and Homo erectus. The date of the earliest successful "out of Africa" migration (earliest migrants with living descendants) has generally been placed at 60,000 years ago as suggested by genetics….A growing number of researchers also suspect that "long-neglected North Africa" was the original home of the modern humans who first trekked out of the continent…..studies in 2013 showed close genetic relationship between Australian, New Guinean, and the Mamanwa people, with divergence times for these groups estimated at 36,000 y ago. Further, substantial gene flow was detected between the Indian populations and aboriginal Australians, indicating an early "southern route" migration out of Africa, and arrival of other populations in the region by subsequent dispersal……Other scientists have proposed a Multiple Dispersal Model, in which there were two migrations out of Africa, one across the Red Sea travelling along the coastal regions to India (the Coastal Route), which would be represented by Haplogroup M. Another group of migrants with Haplogroup N followed the Nile from East Africa, heading northwards and crossing into Asia through the Sinai."….http://en.wikipedia.org/wiki/Recent_African_origin_of_modern_humans#cite_ref-HavilandPrins2009_1-0

"….The group that crossed the Red Sea travelled along the coastal route around the coast of Arabia and Persia until reaching India, which appears to be the first major settling point. Haplogroup M is found in high frequencies along the southern coastal regions of Pakistan and India and it has the greatest diversity in India, indicating that it is here where the mutation may have occurred.[67] Sixty percent of the Indian population belong to Haplogroup M….."….Metspalu M, Kivisild T, Metspalu E, Parik J, Hudjashov G, Kaldma K, Serk P, Karmin M, Behar DM, Gilbert MT, Endicott P, Mastana S, Papiha SS, Skorecki K, Torroni A, Villems R (August 2004). "Most of the extant mtDNA boundaries in south and southwest Asia were likely shaped during the initial settlement of Eurasia by anatomically modern humans". BMC Genet. 5: 26. doi:10.1186/1471-2156-5-26. PMC 516768. PMID 15339343. 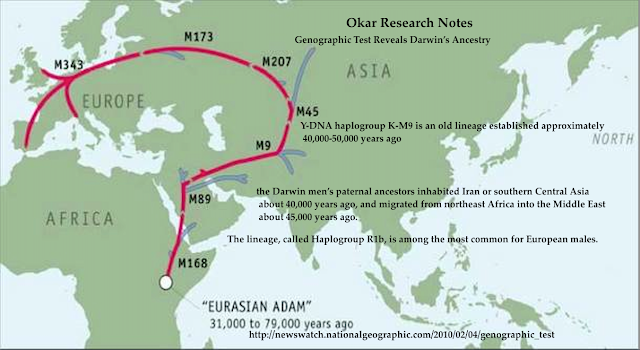 "…From Arabia to India the proportion of haplogroup M increases eastwards: in eastern India, M outnumbers N by a ratio of 3:1. However, crossing over into East Asia, Haplogroup N reappears as the dominant lineage. M is predominant in South East Asia but amongst Indigenous Australians N reemerges as the more common lineage. This discontinuous distribution of Haplogroup N from Europe to Australia can be explained by founder effects and population bottlenecks."…Ingman M, Gyllensten U (July 2003). "Mitochondrial genome variation and evolutionary history of Australian and New Guinean aborigines".

"…. there is general but not complete agreement that modern humans emigrated from Africa in recent times, there is still a difference between geneticists and archaeologists about its a timing. Archaeologists tend to view the genetic data as providing invaluable information about the interrelationship between groups, but they place less confidence in the dates derived from genetic family trees…..There is no evidence of modern humans outside Africa earlier than 50,000 years ago, said Dr. Richard Klein, an archaeologist at Stanford. Also, if something happened 65,000 years ago to allow people to leave Africa, as Dr. Macaulay's team suggests, there should surely be some record of that in the archaeological record in Africa, Dr. Klein said. Yet signs of modern human behavior do not appear in Africa until 50,000 years ago, the transition between the Middle and Later Stone Ages, he said."….http://www.nytimes.com/2005/05/13/science/13migrate.html?_r=0

"…Anatomically-modern humans evolved from archaic Homo sapiens in the Middle Paleolithic, about 200,000 years ago. The emergence of anatomically-modern human marks the dawn of the subspecies Homo sapiens sapiens, i.e. the subspecies of Homo sapiens that includes all modern humans. The oldest fossil remains of anatomically-modern humans are the Omo remains, which date to 195,000 (±5,000) years ago and include two partial skulls as well as arm, leg, foot and pelvis bones….Cro-Magnon (i/kroʊˈmænjən/ or US pronunciation: /kroʊˈmæɡnən/; French: [kʁomaɲɔ̃]) is a name that has been used to describe the first early modern humans (early Homo sapiens sapiens) of the European Upper Paleolithic.[1] Current scientific literature prefers the term European Early Modern Humans (EEMH), to the term 'Cro-Magnon' which has no formal taxonomic status, as it refers neither to a species or subspecies nor to an archaeological phase or culture. The earliest known remains of Cro-Magnon-like humans are radiocarbon dated to 43,000 years before present."….http://en.wikipedia.org/wiki/Anatomically_modern_humans

"…Anatomically modern humans first emerged in East Africa, some 100,000 to 200,000 years ago. An exodus from Africa over the Arabian Peninsula around 60,000 years ago brought modern humans to Eurasia, with one group rapidly settling coastal areas around the Indian Ocean and one group migrating north to steppes of Central Asia."…. Major upper paleolithic sites in Europe. "Atlas of human journey: 45 - 40,000". The genographic project. National Geographic Society. 1996-2010.

"….Neanderthals in India…The Levalloisian assemblages discovered in Sindh, which display very characteristic features, among which are faceted and "chapeau de gendarme" butts, can be attributed to Middle Paleolithic human activity in the area, most probably related with the south-easternmost spread of Homo neanderthalensis. This species might haver reached the Indian Subcontinent either from the Anatolia-Caucasus-Mesopotamia corridor or across the southern regions of the Arabian Peninsula"….They conjecture that the Indus delta was a geographic barrier……These "Levalloisian" assemablages are a lithic technology (stone chipping) which is characteristic of Neanderthal stone working or Mousterian tool culture which dates to the Fourth or Würm Glacial Period some 40,000 years ago. Mousterian tools spanned the period between 300,000 and 30,000 BP, and disappeared with the demise of the Neanderthal."…. Paolo biagi and Elisabetta Starnini, (2011). Neanderthals at the South-Easternmost edge: The spread of Levalloisisan Mousterian in the Indian Subcontinent. 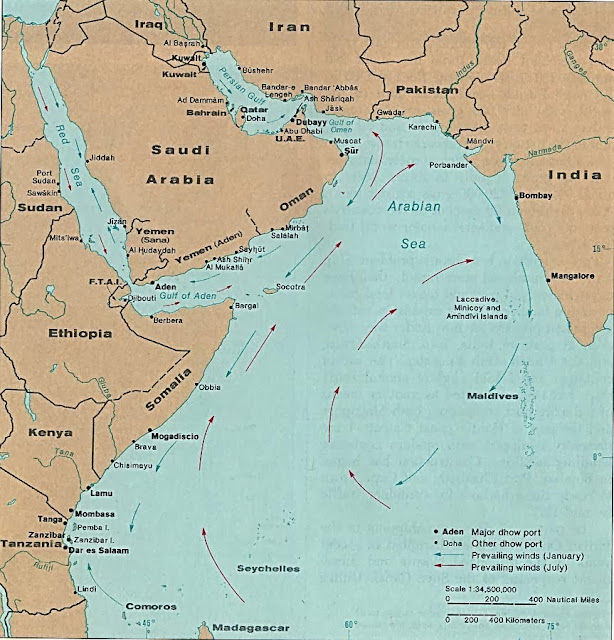 "Mount Meru & African Murungu - The East Africans worship a god called Murungu who is the exact counterpart of the Dravidian god Murugan. Both have phallic aspects….The Gĩkũyũ were – and still are – monotheists believing in a unique and omnipotent god whom they refer to as Ngai. Both the Gĩkũyũ, Embu and Kamba use this name. This god was also known as Murungu by the Meru and Embu tribes, or Mulungu (a variant of a word meaning God which is found as far south as the Zambezi of Zambia). The title Mwathani or Mwathi (the greatest ruler) which comes from the word gwatha meaning to rule or reign with authority was-and- is also used….The Meru people, or Ameru, are a Bantu ethnic group that inhabit the Meru region of Kenya on the fertile lands of north and eastern slopes of Mount Kenya, in the former Eastern Province of Kenya. The name "Meru" refers to both the people and the region which for many years was the only administrative unit….The Embu people live to the south-east of Mount Kenya,[10] and believe that the mountain is God's home (Meru word for God is Ngai or Mwene Njeru). The mountain is sacred, and they build their houses with the doors facing towards it.[17] The Embu people are closely related to the Ameru and Mbeere people. The Mbeere and Akamba are the settlers of the southeast side of the Mountain….."…..http://en.wikipedia.org/wiki/Kikuyu_people.