Dza Patrul Rinpoche (Tib. རྫ་དཔལ་སྤྲུལ་རིན་པོ་ཆེ་, Wyl. rdza dpal sprul rin po che) aka Orgyen Jikmé Chökyi Wangpo (ཨོ་རྒྱན་འཇིགས་མེད་ཆོས་ཀྱི་དབང་པོ་, o rgyan 'jigs med chos kyi dbang po) (1808-1887) — an enlightened master, who, though he lived the life of a vagabond, was one of the most illustrious spiritual teachers of the nineteenth century. 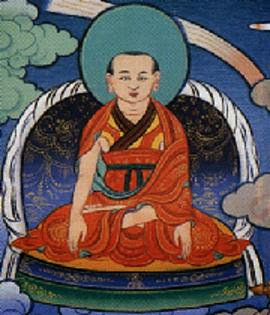 For ages now you've been Beguiled, entranced, and fooled by appearances. Are you aware of that? Are you? Right this very instant, when you're Under the spell of mistaken perception You've got to watch out. Don't let yourself get carried away by this fake and empty life.

Your mind is spinning around About carrying out a lot of useless projects: It's a waste! Give it up! Thinking about the hundred plans you want to accomplish, With never enough time to finish them, Just weighs down your mind. You're completely distracted By all these projects, which never come to an end, But keep spreading out more, like ripples in water. Don't be a fool: for once, just sit tight.

Listening to the teachings — you've already heard hundreds of teachings, But when you haven't grasped the meaning of even one teaching, What's the point of more listening?

Reflecting on the teachings — even though you've listened, If the teachings aren't coming to mind when needed, What's the point of more reflection? None.

Meditating according to the teachings — If your meditation practice still isn't curing The obscuring states of mind—forget about it!

You've added up just how many mantras you've done — But you aren't accomplishing the kyerim visualization. You may get the forms of deities nice and clear — But you're not putting an end to subject and object. You may tame what appear to be evil spirits and ghosts, But you're not training the stream of your own mind.

Your four fine sessions of sadhana practice, So meticulously arranged — Forget about them.

When you're in a good mood, Your practice seems to have lots of clarity — But you just can't relax into it. When you're depressed, Your practice is stable enough But there's no brilliance to it. As for awareness, You try to force yourself into a rigpa-like state, As if stabbing a stake into a target!

When those yogic positions and gazes keep your mind stable Only by keeping mind tethered — Forget about them!

Giving high-sounding lectures Doesn't do your mind-stream any good. The path of analytical reasoning is precise and acute — But it's just more delusion, good for nothing goat-shit. The oral instructions are very profound But not if you don't put them into practice.

Reading over and over those dharma texts That just occupy your mind and make your eyes sore — Forget about it!

You beat your little damaru drum — ting, ting — And your audience thinks it's charming to hear. You're reciting words about offering up your body, But you still haven't stopped holding it dear. You're making your little cymbals go cling, cling — Without keeping the ultimate purpose in mind.

All this dharma-practice equipment That seems so attractive — Forget about it!

Right now, those students are all studying so very hard, But in the end, they can't keep it up. Today, they seem to get the idea, But later on, there's not a trace left. Even if one of them manages to learn a little, He rarely applies his "learning" to his own conduct.

Those elegant dharma disciplines — Forget about them!

This year, he really cares about you, Next year, it's not like that. At first, he seems modest, Then he grows exalted and pompous. The more you nurture and cherish him, The more distant he grows.

These dear friends Who show such smiling faces to begin with — Forget about them!

Her smile seems so full of joy — But who knows if that's really the case? One time, it's pure pleasure, Then it's nine months of mental pain. It might be fine for a month, But sooner or later, there's trouble.

People teasing; your mind embroiled — Your lady-friend — Forget about her!

These endless rounds of conversation Are just attachment and aversion — It's just more goat-shit, good for nothing at all. At the time it seems marvelously entertaining, But really, you're just spreading around stories about other people's mistakes. Your audience seems to be listening politely, But then they grow embarrassed for you.

Useless talk that just make you thirsty — Forget about it!

Giving teachings on meditation texts Without yourself having Gained actual experience through practice, Is like reciting a dance-manual out loud And thinking that's the same as actually dancing.

People may be listening to you with devotion, But it just isn't the real thing.

Sooner or later, when your own actions Contradict the teachings, you'll feel ashamed. Just mouthing the words, Giving dharma explanations that sound so eloquent— Forget about it!

When you don't have a text, you long for it; Then when you've finally gotten it, you hardly look at it.

The number of pages seems few enough, But it's a bit hard to find time to copy them all. Even if you copied down all the dharma texts on earth, You wouldn't be satisfied.

Copying down texts is a waste of time (Unless you get paid) — So forget about it!

Today, they're happy as clams — Tomorrow, they're furious. With all their black moods and white moods, People are never satisfied. Or even if they're nice enough, They may not come through when you really need them, Disappointing you even more.

All this politeness, keeping up a Courteous demeanor — Forget about it!

Worldly and religious work Is the province of gentlemen. Patrul, old boy — that's not for you.

Haven't you noticed what always happens? An old bull, once you've gone to the trouble of borrowing him for his services, Seems to have absolutely no desire left in him at all— (Except to go back to sleep).

Be like that — desireless. Just sleep, eat, piss, shit. There's nothing else in life that has to be done.

Don't get involved with other things: They're not the point.

In the triple universe When you're lower than your company You should take the low seat.

Should you happen to be the superior one, Don't get arrogant.

There's no absolute need to have close friends; You're better off just keeping to yourself.

When you're without any worldly or religious obligations, Don't keep on longing to acquire some!

This advice was written by the practitioner Trime Lodro (Patrul Rinpoche) for his intimate friend Ahu Shri (Patrul Rinpoche), in order to give advice that is tailored exactly to his capacities.

This advice should be put into practice.

May it be virtuous.

Patrul Rinpoche (1808-1887) was the wandering turn-of-the-century Dzogchen master of Eastern Tibet, beloved by the people. He was renowned as the enlightened vagabond.

Thanks to Matthieu Ricard of Shechen Tennyi Dargyeling, and to Anne Burchardi of the Marpa institute of Translation for their advice toward trying to make this translation faithful to both the letter and spirit of the original Tibetan.

All errors and misunderstandings are those of the translator. May this poem, despite all shortcomings of its translation, serve to benefit beings.