"In Tibet's ancient shamanistic tradition the cuckoo was a magical bird, the king of birds. As the cuckoo's first call is the harbinger of spring, so the six verses of the Cuckoo's Song of Total Presence introduce the total presence of the nature of mind. 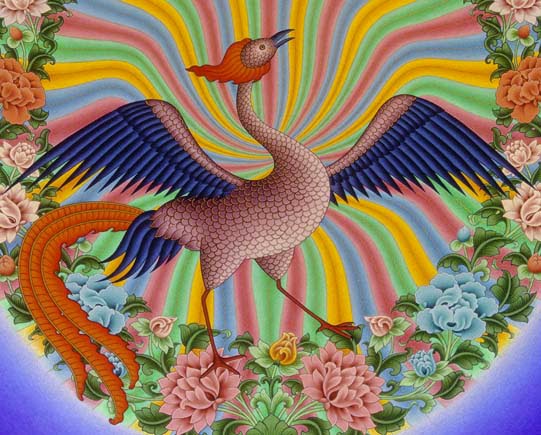 "The six lines of the Cuckoo's Song are also known as the Six Vajra Verses. They are considered to be the root text of the Dzogchen Mind Series tradition out of which the entire view, meditation and action of Dzogchen may be extrapolated. If the meaning of the verses in Tibetan is simple, the expression of that meaning in English is no simple matter.

"The nature of multiplicity is nondual
and things in themselves are pure and simple;
being here and now is thought-free
and it shines out in all forms, always all good;
it is already perfect, so the striving sickness is avoided
and spontaneity is constantly present.

Turned into prose, based on the Dochu commentary, it says:

"All experience, the entire phantasmagoria of the six senses, the diverse multiplicity of existence, in reality is without duality. Even if we examine the parts of the bodhi-matrix in the laboratory of the mind, such specifics are seen to be illusive and indeterminate. There is nothing to grasp and there is no way to express it. The suchness of things, their actuality, left just as it is, is beyond thought and inconceivable and that is the here and now. Yet diversity is manifestly apparent and that is the undiscriminating, all-inclusive sphere of the all-good buddha, Samantabhadra. Total perfection has always been a fact and there has never been anything to do to actuate this immaculate completion. All endeavour is redundant. What remains is spontaneity and that is always present as our natural condition. 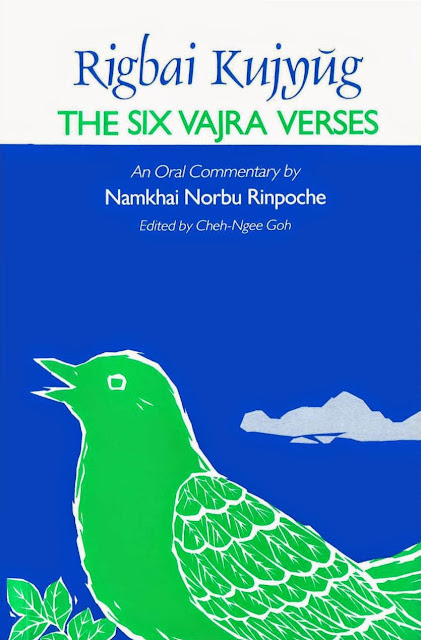 Chogyel Namkhai Norbu and Adriano Clemente rendered the Six Vajra Verses like this:

"In The Supreme Source:
The nature of the variety of phenomena is non-dual
Yet each phenomena is beyond the limits of the mind
The authentic condition as it is does not become a concept
Yet it manifests totally in form, always good
All being already perfect, overcome the sickness of effort
And remain naturally in self-perfection: this is contemplation.

"Even though the nature of the diversity (of all phenomena) is without any duality,
In the terms of the individuality of the things themselves, they are free of any conceptual elaborations.
Even though there exists no thought or conception of what is called the state of being just as it is,
These various appearances which are created are but manifestations of Samantabhadra.
Since everything is complete in itself, one comes to abandon the illness of efforts
And thus one continues spontaneously in the calm state of contemplation.

"Professor Samten Karmay found a version of the text amongst the cache of material that Sir Aurel Stein found in Tun Huang and which was concealed in the tenth century, thus validating its age and form His rendering is this:

"All the varieties of phenomenal existence as a whole do not in reality differ one from another.
Individually also they are beyond conceptualization.
Although as "suchness" there is no mental discursiveness (with regard to them)
Kun-tu bzang po shines forth in all forms.
Abandon all the malady of striving, for one has already acquired it all.
One leaves it as it is with spontaneity.

"The first Tibetan Dzogchen master, Pagor Vairotsana, received the Six Vajra Verses in the eighth century from Shri Singha, his Indian Guru, in the land of Uddiyana. This text was amongst the first translations he made at King Trisong Detsen's court at Samye in Tibet. It is considered the root transmission text of the Mind Series of Dzogchen instruction and is the first in the list of the eighteen transmission texts of the Mind Series tantras. The copy of it found amongst the stash of Tun Huang manuscripts hidden in the tenth century and recovered earlier this century, authenticates its age and form.

"Here is the Tibetan text:

In Tibetan tradition, the cuckoo was considered the king of birds and magical powers were attributed to it. For example, they say the bodhisattva Avalokiteshvara manifested in the form of a cuckoo to teach the Buddha's dharma to the birds of the Himalayas. For Buddhists, the sound of the cuckoo is evocative of the 6-verse text, The Cuckoo's Song of Total Presence. This fundamental Dzogchen text concerns the universally permeating nature of Mind -- non-dual, non-discursive, radiant, spontaneous and free.

According to the Hopi....Non-Natives are not permitted to use Eagle Feathers in any ceremonies...The Hopi say it is better for non-natives to use feathers from the Cuckoo bird...

Greek....SACRED BIRDS.....Cuckoo (Greek "kokkux")….MTS KOKKUX & PRON Mountains in Argolis….Pausanias, Description of Greece 2. 36. 1 :…. "A mountain [near Halike in Argolis], called in old days Thornax; but they say that the name was changed because, according to legend, it was here that the transformation of Zeus into a cuckoo took place. Even to the present day there are sanctuaries on the tops of the mountains : on Mount Kokkux (Cuckoo) one of Zeus, on Pron one of Hera."