Lapis lazuli was being mined in the Sar-i Sang mines and in other mines in the Badakhshan province in northeast Afghanistan as early as the 7th millennium BC.

"An ancient Chinese purple colorant, often called Han purple, is one of the earliest known man-made pigments….You can see Han purple on the famous Terracotta Army of Xi'an, in the exhibition China's Terracotta Warriors: The First Emperor's Legacy…. Han purple and Han blue, along with the closely related color Egyptian blue, have been making news in the world of art conservation….This bright lavender pigment and its near relative, Han blue, are misnamed, since both colors have been found well before the Han dynasty in China, perhaps as early as the Western Zhou dynasty (1045-771 BC)….http://www.asianart.org/collections/han-purple 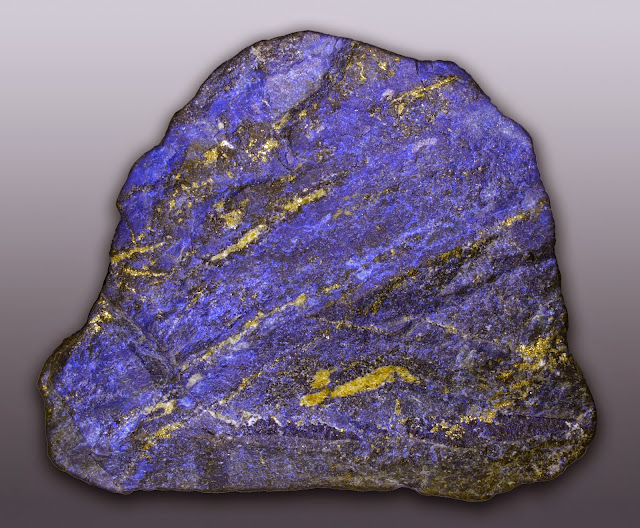 "Natural ultramarine (from ground lapis lazuli), appears in Afghanistan around the 6th century CE, and Maya blue (a cooked compound of indigo and white clay) appears in Mesoamerica around 800 CE. Only Egyptian blue is found earlier than Han purple: it appears about 3600 BCE on wall paintings in Egypt. At other museums, conservators have also detected traces of Egyptian blue on Greco-Roman marble sculptures and Assyrian reliefs."…http://www.asianart.org/collections/han-purple

"Purple is a range of hues of color occurring between red and blue. The Oxford English Dictionary describes it as a deep, rich shade between crimson and violet.In the ancient world, purple was the color worn by Roman Emperors and magistrates, and later by Roman Catholic bishops. Since that time, purple has been commonly associated with royalty and piety….Violet is a spectral, or real color – it occupies its own place at the end of the spectrum of light, and it has its own wavelength (approximately 380–420 nm). It was one of the colors of the spectrum first identified by Isaac Newton in 1672, whereas purple is simply a combination of two colors, red and blue. There is no such thing as the "wavelength of purple light"; it only exists as a combination….http://en.wikipedia.org/wiki/Purple

"….One of the most intriguing of these mysteries is the origin of a synthetic purple pigment, often called "Chinese purple" or "Han purple," that their ancient creators used to adorn the soldiers and their accessories…..Until the 19th century, most pigments were made from naturally occurring minerals or organic dyes. One well-known exception is "Egyptian blue," which is chemically very similar to the Chinese purple"….http://www-ssrl.slac.stanford.edu/research/chinesepurple_summary.html 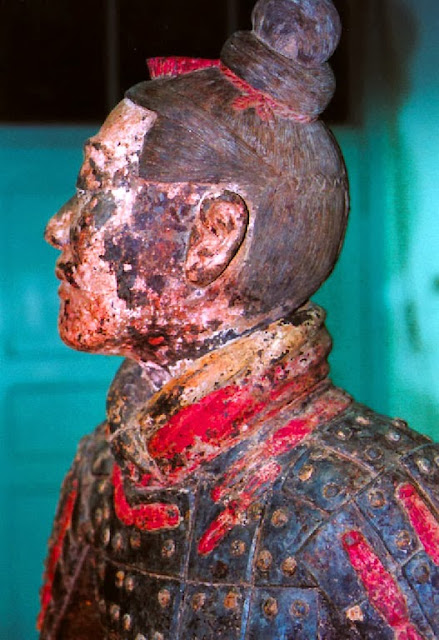 Purple dye on this painted clay soldier buried with the First Emperor of the Qin Dynasty is BaCuSi2O6, also known as Han Purple.

"Lapis Lazuli in an Enigmatic 'Purple' Pigment from a Thirteenth-Century BC Greek Wall Painting….Studies in Conservation….Vol. 51, No. 4 (2006), pp. 252-266…..This paper presents the first evidence of lapis lazuli or lazurite that was detected unexpectedly using micro-Raman spectroscopy during research to identify an enigmatic purple hue on the thirteenth-century BC Greek Bronze Age wall paintings from Gla. The lapis lazuli material was found as part of a mixture including a red iron oxide and an as yet unidentified purple staining material. Existing purple mixtures of that period are also discussed.The identification of lapis lazuli at Gla may prove to be the earliest known use of this pigment in buon fresco, in both Eastern and Western painting traditions. Furthermore, this precedes the next known use of the material as a pigment by 1800 years.The existence of this blue pigment is also discussed within the context of the blue pigment palette of the Bronze Age Aegean and eastern Mediterranean Bronze Age (3300–1100 BC), to show its use in relation to other blue materials and to demonstrate the technology and knowledge mastered by the artists who used this lazurite."….https://www.iiconservation.org/node/1141

"Stanford University, the Advanced Light Source and China used a series of synchrotron-based x-ray techniques, in particular micro-x-ray diffraction and micro-x-ray fluorescence, to characterize the exact chemical make-up of the pigments in Chinese purple. Liu found that deep within the structure of Egyptian blue, calcium plays a key role in the pigments' molecular identity, whereas in Chinese purple, that same slot is filled by the element barium. Liu concluded that, based on this difference, and despite the two pigments' structural similarity, Chinese artisans invented Chinese purple independently of Egyptian influence….."Stable purple is rare in nature," Liu said. "People already knew what the pigment was, but by making a chemical map and combining it with archeological evidence, we were able to solve the puzzle of where it came from." Scholars believe that Chinese alchemists 2,200 years ago were most interested in synthesizing jade, a mineral regarded as sacred in Taoist culture. Liu's analysis found that, based on the combination of compounds used to make the pigment and the technologies available to Chinese artisans at the time, Chinese purple was most likely first developed by Taoist glassmakers attempting to create artificial jade."….http://www-ssrl.slac.stanford.edu/research/highlights_archive/chinesepurple.html

"Tyrian purple became the color of kings, nobles, priests and magistrates all around the Mediterranean….In the Book of Exodus, Yahweh instructs Moses to have the Israelites bring him an offering including cloth "of blue, and purple, and scarlet."… In the Iliad of Homer, the belt of Ajax is purple, and the tails of the horses of Trojan warriors are dipped in purple. In the Odyssey, the blankets on the wedding bed of Odysseus are purple. In the poems of Sappho (6th century BC) she celebrates the skill of the dyers of the Greek kingdom of Lydia who made purple footwear, and in the play of Aeschylus (525–456 BC), Queen Clytemnestra welcomes back her husband Agamemnon by decorating the palace with purple carpets. In the Bible, it was described the color worn by the priests of Yahweh…..Alexander the Great (when giving imperial audiences as the Emperor of the Macedonian Empire), the emperor of the Seleucid Empire, and the kings of Ptolemaic Egypt all wore Tyrian purple…..In China, purple represents spiritual awareness, physical and mental healing, strength and abundance. A red purple symbolizes luck and fame. The Chinese word for purple, zi, is connected with the North Star, Polaris, or zi Wei in Chinese."…http://en.wikipedia.org/wiki/Purple 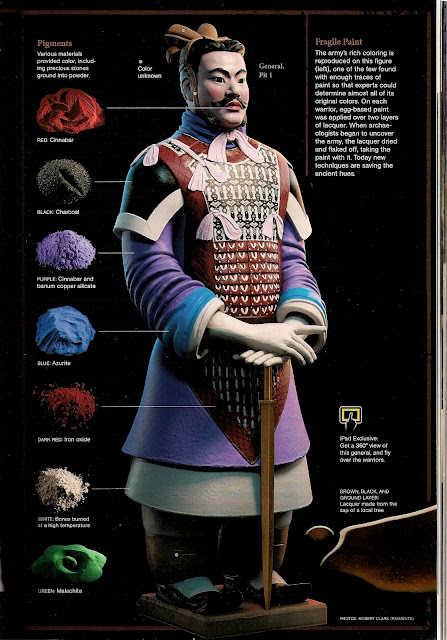 "…Scientists have recently undertaken new experiments with Han purple, using samples taken from the Xi'an warriors. One group has studied the relationship of the pigment to glass and glass manufacture, and how it was used. Stanford physicists Liu Zhi, Apurva Mehta, et al. examined pigment samples from the Xi’an warriors and published their findings. See Liu, Z. et al, “Influence of Taoism on the invention of the purple pigment used on the Qin terracotta warriors,”Journal of Archaeological Science 34 (11):6 (2007). Other scientists have focussed on the physical properties of the pigment itself. Researchers at Stanford and elsewhere have found that when Han purple is exposed to extreme cold and a high magnetic field, the chemical structure of the pigment enters a new state that helps explain the physics of superconductors…"….http://www.asianart.org/collections/han-purple

"Can the pigment know as Chinese purple form a matter wave in certain circumstances?…..University of California scientists from the National High Magnetic Field Laboratory, Pulsed Field Facility at Los Alamos National Laboratory, have discovered an ideal candidate for Bose-Einstein condensation in the ancient Chinese pigment, Han Purple….the team describes how the application of a strong magnetic field to Han Purple (BaCuSi2O6) creates a gas of bosonic spin triplet excitations….Chinese chemists synthesized Han Purple pigment from barium copper silicates for the first time roughly 2,000 years ago and used the pigments for pottery and trade, in addition to large imperial projects such as the Qin Terracotta Warriors of Xi'an in Shaanxi Province. Preceding the invention of both paper and the compass, the ancient creation of Han Purple possibly makes it the first man-made compound containing a metallic bond….A Bose-Einstein condensate is an unusual state of matter that is unlike both liquids and solids. BEC was first predicted in 1925, but it took roughly 70 years of intense theoretical and experimental effort before it was discovered in very dilute atomic gases in 1995. In essence, a BEC is a strange consequence of quantum theory regarding the wave nature of matter: atoms can act like the waves in water or sound in certain ways. At very low temperatures certain types of atoms spontaneously occupy the same quantum state. As a result, the atomic "waves" overlap, forming a giant "matter wave": each atom loses its identity, the assembly of atoms, in effect, acting as one giant atom or condensate." ….http://www.lanl.gov/index.php

"Lapis Lazuili Purple….…"Lapis lazuli was being mined in the Sar-i Sang mines and in other mines in the Badakhshan province in northeast Afghanistan as early as the 7th millennium BC, Lapis beads have been found at neolithic burials in Mehrgarh, the Caucasus, and even as far from Afghanistan as Mauritania. It was used for the eyebrows on the funeral mask of King Tutankhamun (1341–1323 BC).….Sar-i Sang is a famous lapis lazuli mine, probably dating from proto-historic times. It consists of one old disused shaft and two new shafts. Lapis from this site was mined in great quantity during ancient times and was shipped overland to Mesopotamia and Egypt. Analysis of grave goods from the royal cemetery at Ur (2500 BC) in present-day Iraq confirm that lapis used to fashion ceremonial objects and jewelry by the ancient Sumerians came from Sar-i Sang… …During the Middle Ages, artists usually made purple by combining red and blue pigments; most often blue azurite or lapis-lazuili with red ochre, cinnabar or minium. They also combined lake colors made by mixing dye with powder; using woad or indigo dye for the blue, and dye made from cochineal for the red….. Lapis lazuli was known to ancients as sapphire and was highly prized since ancient Babylonian and Egyptian times. The stone has been fashioned into magical amulets in the shape of an eye by the Egyptians, and often ornamented with gold. In powdered form, lapis lazuli was mixed into a paste or paint and applied to the eyelids by the Egyptians as one of the first forms of makeup…"…..Warwick Ball, Archaeological Gazetteer of Afghanistan, 1982, n. 1001