King Vishtaspa of Balkh (900 BC?)… an early follower of Zoroaster, and his patron, and instrumental in the diffusion of the prophet's message. Although Vishtaspa is not epigraphically attested, he is – like Zoroaster also – generally assumed to have been a historical figure (and would have lived in the 10th century BCE or earlier

King Suchandra…..(c.9th C BC?)….According to Indian and Tibetan Kalachakra texts, King Suchandra (Tib. Dawa Sangpo) of the northeastern Indian Kingdom of Shambhala was the one who requested teaching from the Buddha that would allow him to practice the dharma without renouncing his worldly enjoyments and responsibilities. In response to his request, the Buddha gave the first Kalachakra tantra initiation

Cyrus The Great (580-529 BC)…Cyrus II of Persia (Old Persian: Kūruš; New Persian: کوروش بزرگ c. 600 BC or 576 BC–530 BC), commonly known as Cyrus the Great, also known as Cyrus the Elder, was the founder of the Achaemenid Empire. Under his rule, the empire embraced all the previous civilized states of the ancient Near East, expanded vastly and eventually conquered most of Southwest Asia and much of Central Asia and the Caucasus. 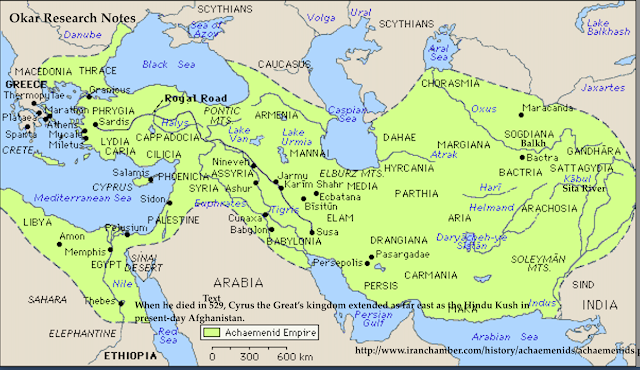 Alexander The Great (Greece: 356-323 BC)….Alexander III of Macedon, Alexander the Great (Greek: Ἀλέξανδρος ὁ Μέγας, Aléxandros ho Mégasiii... from the Greek ἀλέξω alexo "to defend, help" + ἀνήρ aner "man"), was a king of Macedon, a state in northern ancient Greece. Born in Pella in 356 BC, Alexander was tutored by Aristotle until the age of 16. By the age of thirty, he had created one of the largest empires of the ancient world, stretching from the Ionian Sea to the Himalayas. He was undefeated in battle and is considered one of history's most successful commanders. His empire stretched from Greece to modern-day Pakistan….The campaign took Alexander through Media, Parthia, Aria (West Afghanistan), Drangiana, Arachosia (South and Central Afghanistan), Bactria (North and Central Afghanistan), and Scythia…..marriage to Roxana of Balkh (Roshanak in Bactrian)." 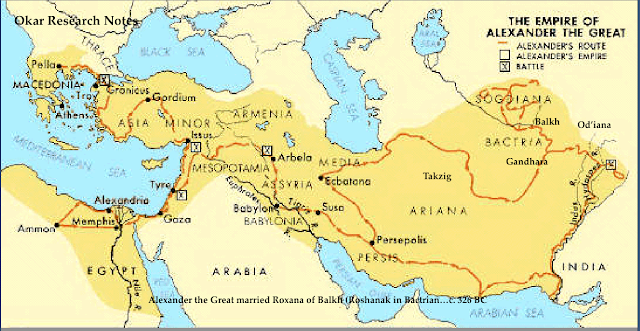 King Chandragupta Maurya (340 BC – 298 BC)….. the founder of the Mauryan Empire and the first emperor to unify India into one state. He ruled from 322 BC until his voluntary retirement and abdication in favour of his son Bindusara in 298 BC…..His grandson was Ashoka

Emperor Ashoka (Maurya: c. 324-187 BC)….. commonly known as Ashoka and also as Ashoka the Great, was an Indian emperor of the Maurya Dynasty who ruled almost all of the Indian subcontinent from ca. 269 to 232 BC. One of India's greatest emperors, Ashoka reigned over most of present-day India after a number of military conquests. His empire stretched from the parts of the ancient territories of Khorasan, Sistan and Balochistan (unpartitioned) in what is now Afghanistan and possibly eastern Iran, through the Hindu Kush mountains in Afghanistan 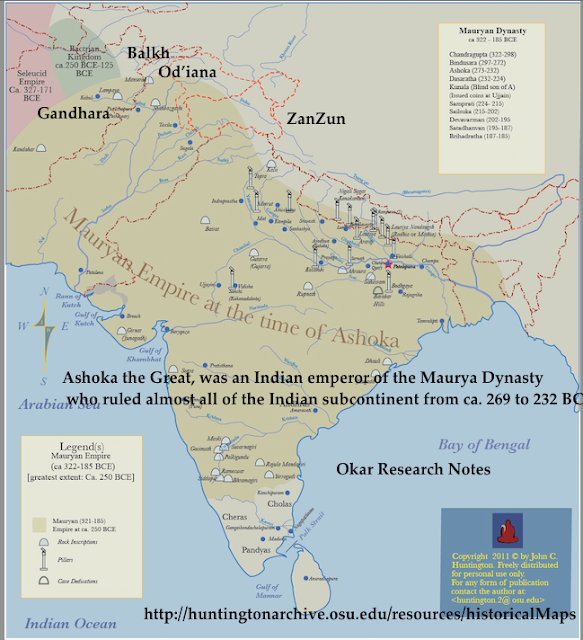 King Diodotus of Bactria (c. 285 - 239 BC) ….Diodotus I Soter (Greek: Διόδοτος Α' ὁ Σωτήρ) was Seleucid satrap of Bactria, rebelled against Seleucid rule soon after the death of Antiochus II in c. 255 or 246 BC, and wrested independence for his territory.

King Menander (Bactria: c. 165- 130 BC) ….Menander I Soter "The Saviour" (known as Milinda in Indian Pali sources) was the Indo-Greek king (155-130 BC) who established a large empire in the South Asia and became a patron of Buddhism….Menander was born in the Caucasus, and was initially a king of Bactria.

King Antialcidas (c. 100 BC ) ...… Born: ? Died: abt. 100 BC…Antialcidas Nikephoros "the Victorious" was a Greek King of the Indo-Greek Kingdom, king of the Eucratid Dynasty, who reigned from his capital at Taxila. Bopearachchi has suggested that he ruled from ca. 115 to 95 BCE in the western parts of the Indo-Greek realms, whereas R. C. Senior places him around 130 to 120 BCE

King Kanishka (Kushan dynasty 127-151 AD)…Kanishka (Kanishka the Great), (Sanskrit: कनिष्क, Bactrian language: Κανηϸκι, Middle Chinese: 迦腻色伽 (Ka-ni-sak-ka > New Chinese: Jianisejia)) was an emperor of the Kushan dynasty (127–151) who ruled an empire extending from Turfan in the Tarim Basin to Pataliputra on the Gangetic plain and famous for his military, political, and spiritual achievements. 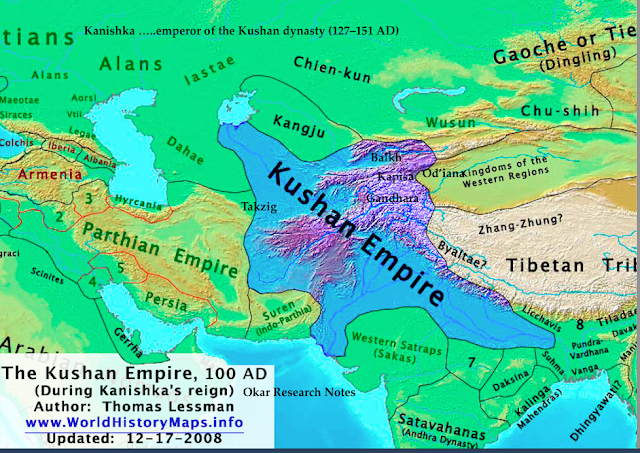 Clickon the map to enlarge

King Pravarasena & Kashmir (270-330 CE)…Vakataka dynasty….Pravarasena I. (270-330), who maintained the realm as a great power, he was the first Vakataka ruler, who called himself a Samrat (universal ruler)…The Vākāṭakas, like many coeval dynasties of the Deccan, claimed Buddhist origin. Little is known about Vindhyaśakti (c. 250–270 CE)…The Gupta emperor Chandragupta II married his daughter into Vakataka royal family and with their support annexed Gujarat from the Saka Satraps in fourth century CE.

King Rāvana….King Rāvana of Lankapura …Ravana is the primary antagonist in the Hindu epic Ramayana, where he is depicted as the Rakshasa king of Lanka.

King Gayōmard….King Gar-shāh….Gayōmart Gar-shāh (King of the Mountains) was the first human Uhrmazd created. …Gayō Marətan (or Gayōmard or Gayōmart in later Zoroastrian texts) is the Avestan name of the mythological first Man in Old Iranian culture. The corresponding name in Middle Persian is Kayōmart, Modern Persian Keyumars ….In Ferdowsi's Shahnameh he appears as the first shāh of the world… 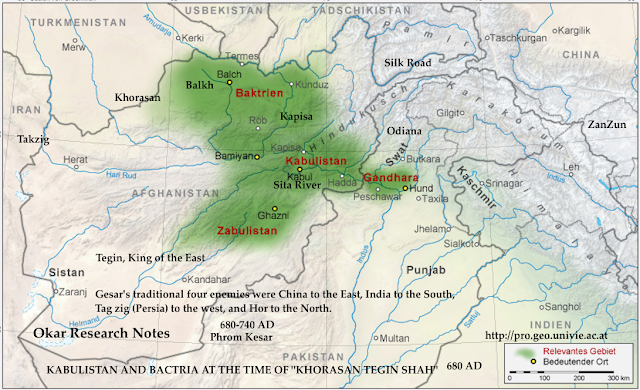