"Ferdowsi's Shahnameh tells us that King Vishtasp was King of Balkh at the time of Zoroaster....Dates proposed in scholarly literature diverge widely, between the 18th and the 6th centuries BCE.....Controversy over Zaraϑuštra's date has been an embarrassment of long standing to Zoroastrian studies. If anything approaching a consensus exists, it is that he lived no later than 1000 BC, give or take a century or so, though reputable scholars have proposed dates as widely apart as 1750 BC and '258 years before Alexander.'" (Encyclopedia Iranica)

"Vishtaspa (Vištāspa) is the Avestan-language name of a figure of Zoroastrian scripture and tradition, portrayed as an early follower of Zoroaster, and his patron, and instrumental in the diffusion of the prophet's message. Although Vishtaspa is not epigraphically attested, he is – like Zoroaster also – generally assumed to have been a historical figure (and would have lived in the 10th (?) century BCE or earlier….the Gathas celebrate Vishtaspa as the "patron of Zoroaster and the establisher of the first Zoroastrian community."….

"Zarathustra and his followers wandered until they found a sympathetic friend in King Vishtaspa, who was not the father of King Darius but an earlier ruler of the same name, who may have lived in eastern Iran or in Bactria, modern Afghanistan. There, Zarathushtra won over the king, and his court, and became the court prophet."....http://www.pyracantha.com/Z/zardusht.html 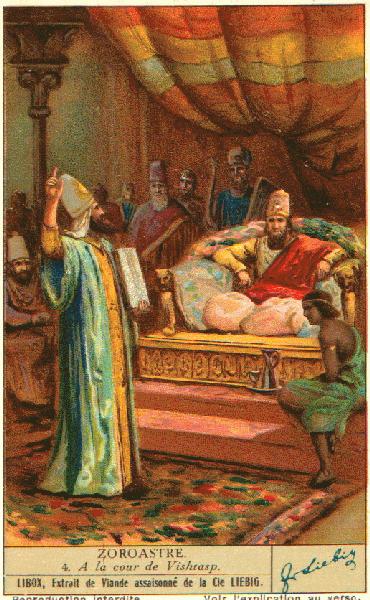 "The Gathic allusions recur in the Yashts of the Younger Avesta. The appeal to Mazda for a boon reappears in Yasht 5.98, where the boon is asked for the Haugvan and Naotara families, and in which Vishtaspa is said to be a member of the latter….. Later in the same hymn, Zoroaster is described as appealing to Mazda to "bring Vishtaspa, son of Aurvataspa, to think according to the Religion, to speak according to the Religion, to act according to the Religion." (Yt. 5.104–105). In Yasht 9.25–26, the last part of which is an adaptation of the Gathic Yasna 49.7, the prophet makes the same appeal with regard to Hutaosa, wife of Vishtaspa…..In Yasht 9.130, Vishtaspa himself appeals for the ability to drive off the attacks of the daeva-worshipping Arejat.aspa and other members of drujvant Hyaona family. Similarly in Yasht 5.109, Vishtaspa pleads for strength that he may "crush Tathryavant of the bad religion, the daeva-worshipper Peshana, and the wicked Arejat.aspa." Elsewhere (Yt. 5.112–113), Vishtaspa also pleads for strength on behalf of Zairivairi, who in later tradition is said to be Vishtaspa's younger brother. The allusions to conflicts (perhaps battles, see below) are again obliquely referred to in Yasht 13.99–100, in which the fravashis of Zoroaster and Vishtaspa are described as victorious combatants for the Truth, and the rescuers and furtherers of the Religion. This description is repeated in Yasht 19.84–87, where Zoroaster, Vishtaspa and Vishtaspa's ancestors are additionally said to possess khvarenah. While the chief hero of the conflicts is said to be Vishtaspa's son, Spentodhata, (Yt. 13.103)[5] in Yasht 13.100, Vishtaspa is proclaimed to have set his adopted faith "in the place of honor" amongst peoples.

At the time of Zarathushtra's birth, Mazda worship had lost ground to deva worship,…..He preached establishing an ethical order based on the old Mazdayasni faith - one that would come to be known as the Mazdayasni Ahura-Tkaesha. .....The first royal patron of Zarathushtra's religion was King Vishtasp. Ferdowsi's Shahnameh tells us that King Vishtasp was king of Balkh, which at that time had become a tributary state of Turan (Sugd). ….When King Vishtasp adopted the Zoroastrian Mazdayasni faith, he also decided to stop paying tribute to King Arjasp of Turan, whereupon Arjasp gave Vishtasp an ultimatum to resume paying tribute and forsake his adopted faith, or face a devastating invasion (cf. Warner & Atkinson translations of the Shahnameh)……..

Vishtasp rejected the ultimatum and what followed was the War of Religion (cf. Greater Bundahishn 9.36 and Lesser Bundahishn 12.36) in which Vishtasp was apparantly victorious …..The conflict and Vishtasp's victory could have resulted in the deva worshippers living in his Central Asian kingdom, leaving or being pushed south through the Hindu Kush mountain passes into the upper Indus valley (today's Pakistan). It is possible that the Indus valley had previously been populated by deva worshippers, and that those from Central Asia migrated to join their co-religionists. The Hindu Kush (meaning Hindu Killer) would from that point, have formed a border between the Zoroastrian Mazda worshippers and the deva worshippers.

Kalachakra...... the protest of a group of no less than 35 million (!) Rishis (seers) led by the sage Suryaratha ("sun chariot”). As the first Kulika king, Manjushrikirti, preached the Kalachakra Tantra to his subjects, Suryaratha distanced himself from it, and his followers, the Rishis, joined him. They preferred to choose banishment from Shambhala than to follow the “diamond path” (Vajrayana). Nonetheless, after they had set out in the direction of India and had already crossed the border of the kingdom, Manjushrikirti sank in to a deep meditation, stunned the emigrants by magic and ordered demon birds to bring them back.This event probably concerns a confrontation between two religious schools. The Rishis worshipped only the sun.

"Suchandra (Tib. Dawa Sangpo) c. 900 to 876 BC. Note: the Kalachakra calculations put the life of Shakyamuni Buddha quite a bit earlier than is generally accepted, and the Tibetans produced a number of divergent calculations of the dates given here. Also, many of the names of the kings are often wrongly Sanskritized (back-translated from the Tibetan) in Western publications."....http://en.wikipedia.org/wiki/Kings_of_Shambhala

The Indus Valley was called Hindu (later Hind or Ind) in the Avesta. The locals called the region Sindhu and then Sind. Replacing 'h' with 's' is a common way of transforming many Avestan words to Sanskrit. The Persians eventually called the people of the region Hindi, a name that would in western parlance become Indie (India). Indians, however, refer to their country as Bharat. In addition, the name for the religion of the deva worshippers, Hindu, is also derived from the Avestan / Iranian / Persian names for the Indus region. Hindu is not a name for their religion used by the ancient Hindus. Hindus refer to their religion by various names such as Sanatana Dharma, meaning eternal law in Sanskrit, or the Vaideeha Dharma.

However, the Greater Bundahishn also records in 9.36, "In the War of Religion, when defeat was with the Iranians,... ." Such a defeat could have pushed the Iranian out of their Central Asian homeland westward. The Lesser Bundahishn in 12.32-33 states, "32. From the same Padashkh-Vargar mountain unto Mount Kumish, which they call Mount Madofryad ('Come-to-help') -- that in which Vishtasp routed Arjasp -- is Mount Miyan-i-Dast ('mid-plain'), and was broken off from that mountain there. 33. They say, in the War of the Religion, when there was confusion among the Iranians it broke off from that mountain, and slid down into the middle of the plain; the Iranians were saved by it, and it was called 'Come-to-help' by them."

"The Rigdens other than Rigden Raudrachakrin are of the Asura family because of bestowing fear. If one thinks this explanation is not suitable, Palden Raudrachakrin having a short spear bestows fear in the asura family. So it is taught.... The linguistic history indicates that the Aryans ("Indo-Europeans"....."Iran") originally formed a single people until the beginning of the 2nd millenium BC when the Deva worshipping Indian Aryans and the Asura worshiping Iranian Aryans went separate ways....... ... The Kalachakra discusses the expulsion of the Deva worshippers from Shambhala and refers to the Rigden kings as Asura." (Yarshater: 1987..pg 684)

The meaning of Vishtaspa's name is uncertain. Interpretations include "'he whose horses have (or horse has) come in ready (for riding, etc.)'…..In the Gathas, Vishtaspa is repeatedly (Y. 46.14, 51.16, 53.2) referred to as a kavi, which is etymologically a term for a mantic seer, or poet-priest…… In the Younger Avesta the term is also applied to wise men generally, to include Vishtaspa and his ancestors. In tradition however, the kavis are kings, "evidently because Vīštāspa and his forbears, the 'kavis' par excellence, were princely rulers. Presumably the gift of prophecy, of mantic poetry, was hereditary in their family."……

"In medieval Zoroastrian chronology, Vishtaspa is identified as a grandfather of "Ardashir", i.e. the 5th century BCE Artaxerxes I (or II). This myth is tied to the Sassanid (early 3rd–early 7th century) claim of descent from Artaxerxes, and the claim of relationship to the Kayanids, that is, with Vishtaspa and his ancestors. The full adoption of Kayanid names, titles and myths from the Avesta by the Sassanids was a "main component of [Sassanid] ideology." The Sassanid association of their dynasty with Vishtaspa's is a development dated to the end of the 4th century, and which "arose to some extent because this was when the Sasanians conquered Balkh, the birthplace of Vishtasp and the 'holy land' of Zoroastrianism."……

The name 'Visthaspa' is 'Hystaspes' in the Greek and Latin texts of the Hellenistic era. Besides referring to historically attested persons named Vishtaspa, it was also applied to Zoroaster's patron, who the Greeks and Romans imagined to be a sage of great antiquity, and the putative author of a set of prophecies written under his name….

"The name Vishtaspa was common in Achaemenid Iran.......The publication of the Aramaic archive from fourth-century Bactria (ADAB: Naveh and Shaked 2012) sheds new light on the eastern satrapies in the last decades of the Achaemenids and the era of Alexander. Historians have long been frustrated by the paucity of written sources on the region, even in the narrow window offered by classical accounts of Alexander’s campaigns, and the appearance of new evidence is cause for great excitement. The ADAB documents refer to numerous individuals unattested in other written sources, from minor village officials to a probable satrap of Bactria in the reign of Artaxerxes III. The infamous regicide and would-be king Bessus, previously known from classical authors alone, appears now in a Bactrian context, separated from his role in the fall of the Achaemenid dynasty (ADAB C1). Another individual who may appear in both the Alexander histories and the Bactrian archive is a certain Vishtaspa (wšt’sp), who appears in a short letter concerning a transfer of sheep between two other men with Iranian names (ADAB C2: 1).".....http://www.achemenet.com/document/2013.002-Hyland.pdf

"The traditional Zoroastrian date for Zarathushtra's birth and ministry is around 600 B.C. This is derived from a Greek source that places him "300 years before Alexander" which would give that date; other rationales for the 600 BC date identify the King Vishtaspa of Zarathushtra's Gathas with the father of the Persian King Darius, who lived around that time. As the linguists of both Europe and India worked on the Gathas, however, it became clear that the language of the Gathas attributed to Zarathushtra was far older than the language spoken in Iran at the time of King Darius' father. Gathic Avestan was very close to the Sanskrit of the Indian Rig-Vedas, which can be dated from the period 1500-1200 BC. This would mean that Zarathushtra lived far earlier than the "traditional" date. Some scholars have said that the 600 BC date is still plausible if Gathic Avestan was actually an artificially preserved sacred language, somewhat like Latin, which continued in literature and rituals thousands of years after it had ceased to be spoken. Recent work by Martin Schwartz and Almut Hintze tends to discount this theory, as the linguists show that the Gathas are not the work of an academic writing in a dead language; they show all the signs of poetry composed and recited in an oral tradition, similar to the heroic poetry of Homer or the Rig-Vedas. These studies would confirm the earlier date for Zarathushtra."....http://www.pyracantha.com/Z/zardusht.html