"The Duke of Zhou created an entire ceremonial city along strict cosmological principals to house the Shang aristocracy and the nine tripods representing Huaxia sovereignty.... the earliest Chinese urban planning was a synthesis of Longshan traditional cosmology, geomancy, astrology, and numerology. This synthesis generated a diagram of the cosmos, which placed man, state, nature, and, heaven in harmony. The city was planned in the context of this cosmic diagram to maintain harmony and balance, principles important in Chinese law."....http://en.wikipedia.org/wiki/Ancient_Chinese_urban_planning 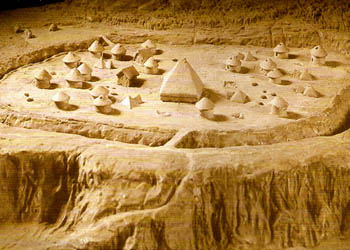 Neolithic Age urbanization....Yangshao and Longshan Culture.....Urbanization begins at Banpo (4,800-3,750 BC) on the Zhongyuan plain of the Yellow River. Banpo grew from a typical Yangshao village in both size and organization until the construction of the Great Hall ca. 4000 BCE. Like Eridu in Mesopotamia, Banpo in East Asia was the first instance of specialized architecture, something other than a house. Physically, Banpo was composed of 200 round pit houses and the Great Hall across 5 hectares and surrounded by a ditch. These pit houses were sited for solar gain by aligning the door to the Yingshi asterism just after the winter solstice. Already, at this early stage the principle of south-facing entry was firmly established.....Longshan Culture (3000-2000 BC)arrived from the east one thousand years after Banpo in the same area.".....http://en.wikipedia.org/wiki/Ancient_Chinese_urban_planning

"...... the connection between ancestors, earth, and fertility developed into a theory of qi energy and fengshui geomancy. The Book of Burial elaborates this theory. Man is considered concentrated Qi, when his bones are returned to the earth they become re-energized by Qi. The living descendants are affected by the Qi generated from the bones of their ancestors, "as a lute string will pick of the vibration of another lute string near it." In this theory, the world was an active matrix of Qi into which graves, houses, and cities must be carefully inserted by fengshui principals to maintain harmony. The shape of this world was described by a parallel cosmology of a round heaven revolving around a square earth. This gaitian cosmology originated from neolithic astronomy. This cosmic diagram is depicted on jade bi and cong used to talk to sky and earth spirits, respectively. In particular, Yangshao pottery decorated with Big Dipper inscribed on a nine-in-one square (earth) surrounded by a circle (heaven) already depicts a cosmic diagram of earth divided into nine parts. This nine-in-square, in time, became basis of the well-field system, which was the basic geometric and legal module of urban-regional planning. Likewise, the Great Hall became the prototype of later palaces and imperial cities.".....Needham, Joseph (1959). Science and Civilisation in China; Volume 3 of Mathematics & the Sciences of the Heavens & the Earth. Cambridge University Press. p. 926. ISBN 0-521-05801-5.

" In this system earth was the mirror of heaven ruled by the Jade Emperor. Residing in Polaris, he sent the heavenly breath of Qi down to earth through meridians. The Qi concentrated in mountains and rivers, by informed site planning, a building and even a city could fit into this energized matrix. Politically, Qi flowed from heaven through earth into and the through the divine emperor through his city out of the gates into his realm. The emperor kept heaven and earth in harmonious balance through his absolute power. An adviser class interpreted the omens of heaven to inform his actions."...Schinz, Alfred (1996). The magic square: cities in ancient China. Edition Axel Menges. p. 428. ISBN 3-930698-02-1.

"When the Zhou took control of China from the Shang, they upset the natural and harmonious order of the universe, there was a serious legal question over their divine right to rule. The sudden death of their leader shortly afterward seemed to confirm that they had violated the will of heaven. The acting regent, the Duke of Zhou, acted quickly to restore the balance by resettling the Shang aristocracy, scholars, and craftsmen in the Holy Waste of Xia. He designed a new holy city, Chengzhou, according to strict cosmological principals to house them. Finally, he moved the 9 ding to be stored there. It was believed by these actions harmony would be restored and heaven would grant the Zhou the right to rule China. This work although based on centuries of design precedent was a radial synthsis and the first truly planned city in China. With Chengzhou, the Duke of Zhou established the classical standard of urban planning. Most new cities were modeled after its design. Ultimately, its forms were codified in the Rites of Zhou...The Rites of Zhou (traditional Chinese: 周禮; simplified Chinese: 周礼; pinyin: Zhōu Lǐ) is – along with the Book of Rites and the Etiquette and Ceremonial – one of three ancient ritual texts (the "Three Rites") listed among the classics of Confucianism..".....