The Kushan Empire was an empire in Central Asia originally formed in the early 1st century CE under Kujula Kadphises in the territories of ancient Bactria around the Oxus River (Amu Darya), and later based near Kabul, Afghanistan. 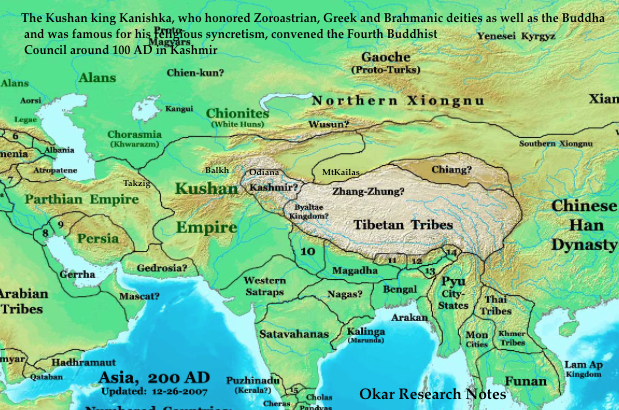 King Vima Kadphises (ca. 95 – ca. 127)...Vima Kadphises added to the Kushan territory by his conquests in Afghanistan and north-west Pakistan.

Kanishka, King of Kings...Buddhist emperor Kanishka (127–151 BCE)....The Kushans also had a summer capital in Bagram (then known as Kapisa), where the "Begram Treasure", comprising works of art from Greece to China, has been found.


"The coins of Kujula and his immediate successors give the king’s name and titulature in Greek, often with a Kharoṣṭhī version on the reverse. The earliest issues of Kanishka likewise bear on the obverse his name and title in Greek (basileus basileōn kanēškou “[coin] of Kanishka, king of kings”), while the reverses portray divinities named in Greek as Hēphaistos, Hēlios, Nanaia, and Selēnē. Later issues follow the same pattern, but the legends are henceforward in Bactrian rather than Greek. Kanishka’s titulature appears (in its fullest form) as šaonano šao kanēški košano “of Kanishka, king of kings, the Kushan,” that of his successor Huvishka as šaonano šao ooēški košano. The forms kanēški and ooēški (also ouoēški, ooēške) are in the oblique case, cf. the Greek gen. kanēškou; a few coins of Huvishka have the nom. form (ooēško), as do those of the succeeding rulers, (bazodēo), Kanishka II (kanēško), Vasishka (bazēško, cf. R. Göbl, Dokumente zur Geschichte der iranischen Hunnen in Baktrien und Indien, Wiesbaden, 1967, III, pl. 8), etc. 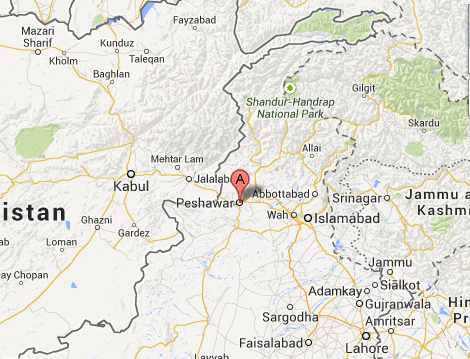 Gandhāra (Pashto: ګندارا‎, Urdu: گندھارا‎) was an ancient Buddhist kingdom in the Swat and Kabul river valleys and the Pothohar Plateau, in northern Pakistan and eastern Afghanistan. Its main cities were Purushapura (modern Peshawar), and Takshashila (modern Taxila). The Kingdom of Gandhara lasted from the early 1st millennium BC to the 11th century AD. It attained its height from the 1st century to the 5th century under the Kushan Kings.