"The Kashmir Smast caves, also called Kashmir Smats, are a series of natural limestone caves, artificially expanded from the Kushan to the Shahi periods, situated in the Babozai and Pirsai mountains in the Mardan Valley in Northern Pakistan. According to recent scholarship based on a rare series of bronze coins and artifacts found in the region, the caves and their adjacent valley probably comprised a sovereign kingdom in Gandhara which maintained at least partial independence for almost 500 years, from c. 4th century AD to the 9th century AD. For most of its history, it was ruled by White Hun (or Hephthalite) governors or princes."....http://en.wikipedia.org/wiki/Kashmir_Smast 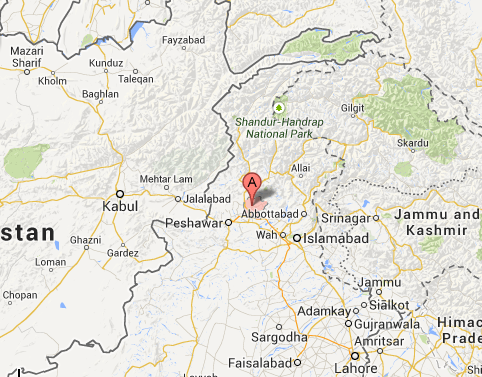 Kashmir Smast is now a well known site in the Mardan valley......Much of the Mardan material is numismatic, from the late to Kushanas through to Hephalites, and is interesting because it includes a substantial number of previously unknown types, many of which seem to have circulated only in the immediate vicinity (they may even have been minted and circulated purely for ritual purposes at Kashmiri Smast). It also outlines some of the other important discoveries; sculpture, inscriptions (on reliquary caskets of a type generally known from Gandhara), and even a birch bark scroll, apparently ritually interred."...http://kushan.org/news/news6.htm

"The Gandhāran Buddhist texts are the oldest Buddhist manuscripts yet discovered, dating from about the 1st century CE. They are written in Gāndhārī, and are possibly the oldest extant Bactrian and Pakistani texts altogether.....The Gandharan Buddhist texts are both the earliest Buddhist as well as Asian manuscripts discovered so far. Most are written on birch bark and were found in labelled clay pots. Panini has mentioned both the Vedic form of Sanskrit as well as what seems to be Gandhari, a later form of Sanskrit, in his Ashtadhyayi.....Gandhara's language was a Prakrit or "Middle Indo-Aryan" dialect, usually called Gāndhārī. Texts are written right-to-left in the Kharoṣṭhī script, which had been adapted for Indo-Aryan languages..."....Salomon, Richard. Ancient Buddhist Scrolls from Gandhāra, University of Washington Press, Seattle, 1999, ISBN 0-295-97769-8.

"Mardan valley was part of the ancient Gandhara civilization but at that time the name Mardan and Mardan City was not constructed, instead Gandhara civilization consisted of small sub-kingdoms at the hill tops of Jamal Garhi, Shahbaz Garhi and Thakhat Bahi. The ruins of these cities still exist.".....http://en.wikipedia.org/wiki/Mardan 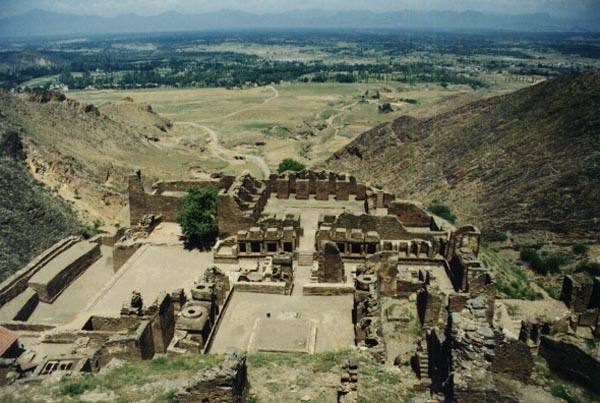 Takht-i Bahi, Buddhist Monastery......Looking North with Hindu Kush in Background...."The most striking Buddhist site I visited was Tahkt-i Bahi near Mardan. This site was a large monastery located on a hilltop, occupied from the 1st to 7th century A.D. Much of the friezes and statuary was removed between 1907 and 1913, some of which can be seen on site and in museums in Pakistan. Around this site are many smaller stupas and monasteries, but the amazing views from Takht-i Bahi make this monastery worth the long hike up.".....http://www.mango.itgo.com/buddhist.htm

"...Alexander the Great reached this beautiful valley of Mardan through Kunar Afghanistan and Swat in 326 BC.This was followed by Buddhism till the 7th century AD.....the brave, cultureful people that they earned the name "MARDAN" for themselves. It means MEN with charisma and courage. Hence the area is called Mardan..... 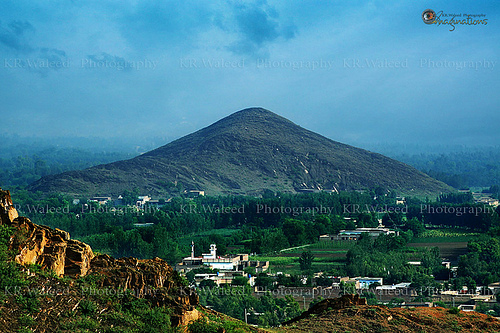 The Mount of Takht-i-Bahi

""Smast" is a mistranscription of the Pashto word for 'cave,' which is actually smats (Pashto: سمڅ‎).....As for "Kashmir", the Gazetteer of the Peshawar district 1897-1898 describes that “the name [Kashmir Smast] may be derived from the fact that the gorge here is fairly and picturesquely wooded, and this may have suggested Kashmir.” Another explanation is that according to legend, the network caves was so vast that it stretched from Gandhara to the kingdom of Kashmir......A number of the cells have wooden interiors, carved with elaborate Hindu and Buddhist iconography. Remarkably, excavations at the Kashmir Smast site have not only brought forth artifacts of extreme historical importance but have also uncovered one of the most well organized town planning systems in ancient Gandhara.....Cunningham associated the Kashmir Smast with the cave of Prince Sudana in Mount Dantalok, described by the contemporary Chinese traveler Hsuan-tsang......There are well built stone castles dating back to Buddhist times all along the northern hills."....http://en.wikipedia.org/wiki/Kashmir_Smast

" As we study the varieties of coins found in the Kashmir Smast, it becomes apparent that during the period of the Kidara, the Alxon, the Nazek, the Turk Shahis, and the Hindu Shahis, a minor kingdom based in this region maintained some level of autonomy from the greater Hunnic hordes (mongols) which ruled Gandhara. This is evidenced by the use of hithertofore unrecorded images, stylistic peculiarities, and tamghas (royal symbols)......Scholars contend that the bronze currency found in the region were issued by local semi-independent governors, or Tegins, in the Kashmir Smast valley, paying allegiance to the greater Hunnic Tegins of Gandhara and Bactria. The feudal and tribal nature of the ancient Central Asian' states allowed for substantial independence to be exercised by local governors.....Waleed Ziad (2006), "Treasures of Kashmir Smast, followed by interview with Ijaz Khan" in Oriental Numismatic Society Journal- Volume 187