"Shangdi (Chinese: 上帝, p Shàngdì, w Shang-ti), also written simply as Di (帝), is a supreme sky deity in China's traditional religion.....often translated "Celestial Emperor".....Shangdi was considered too distant to be worshiped directly by ordinary mortals. ....In the later Shang and Zhou dynasties, Shangdi was gradually replaced by or conflated with Heaven (天, Tiān).... The Duke of Zhou created an entire ceremonial city along strict cosmological principals to house the Shang aristocracy and the nine tripods representing Huaxia sovereignty; the Shang were then charged with maintaining the Rites of Zhou. Likewise, the Shang's lesser houses, the shi knightly class, developed directly into the learned Confucian gentry and scholars who advised the Zhou rulers on courtly etiquette and ceremony"........http://en.wikipedia.org/wiki/Shangdi

"The Book of Rites (simplified Chinese: 礼记; traditional Chinese: 禮記; pinyin: Lǐjì), literally the Record of Rites, is a collection of texts by various unknown authors describing the social forms, administration, and ceremonial rites of the Zhou Dynasty (c. 1046–256 BC) ...During the Zhou Dynasty, the use of iron was introduced to China and the written script evolved into its modern form ...."

".....By the time of the Han dynasty, the influential Confucian scholar Zheng Xuan glossed: "Shangdi is another name for Heaven". Dong Zhongshu said: "Heaven is the ultimate authority, the king of gods who should be admired by the king"....In later eras, he was more commonly referred to as the August Heavenly Celestial Emperor (皇天上帝, Huángtiān Shàngdì) and, in this usage, he is especially conflated with the Taoist Jade Emperor."....http://en.wikipedia.org/wiki/Shangdi

"LIJI...Confucius described Li as all traditional forms that provided a standard of conduct. Li literally means "rites" but it can also be used to refer to "ceremonial" or "rules of conduct". The term has come to generally be associated with "good form" or "decorum". Confucius felt that li should emphasize the spirit of piety and respect for others through rules of conduct and ceremonies. As outlined in the Book of Rites, li is meant to restore the significance of traditional forms by looking at the simplicity of the past."....Dawson, Raymond. Confucius. Great Britain: The Guernsey Press Co. Ltd., 1981

"...In the Temple of Heaven complex in Beijing, the emperors sacrificed a bull on the great white marble Altar of Heaven at an annual ceremony, the year’s most important and colourful celebration, the so-called ‘Border Sacrifice’......The ceremony goes back 4,000 years. One of the earliest accounts of the Border Sacrifice is found in the Shu Jing (Book of History), compiled by Confucius, where it is recorded of Emperor Shun (who ruled from about 2256 BC to 2205 BC when the first recorded dynasty began) that ‘he sacrificed to ShangDi.’ ....James Legge, The Notions of the Chinese Concerning God and Spirits

"The great philosopher Motze (408-382 BC) also thought of Heaven (Tian) as the Creator-God......Mohism or Moism (Chinese: 墨家; pinyin: Mòjiā; literally "School of Mo") was a Chinese philosophy developed by the followers of Mozi (also referred to as Mo Tzu (Master Mo), Latinized as Micius), 470 BC–c.391 BC. It evolved at about the same time as Confucianism, Taoism".....http://en.wikipedia.org/wiki/Mohist 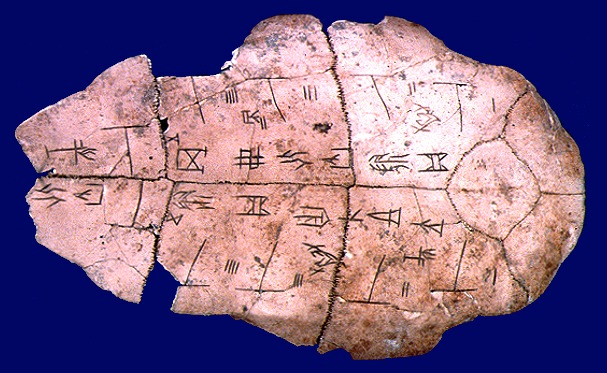 "The earliest references to Shangdi are found in Oracle Bone inscriptions of the Shang Dynasty (ca. 1600 BC – ca. 1046 BC). ....The name for the supreme being among the early Shang Dynasty was Shang Di....he was believed to be unique; was never represented by an idol or image; was an “all-powerful and supreme Deity” ; “sovereign of surrounding nations as well” as the Chinese themselves” ; ruled the forces of nature; “governed the construction of cities, the outcome of wars, and the well-being and misfortune of human beings”.... “received no cultic or manipulative worship”.