Magism originated in Media….Cyrus introduced the Magian priesthood into Persia….The Median kingdom was conquered in 550 BCE by Cyrus the Great, who established the next Iranian dynasty—the Persian Achaemenid Empire.…."The name of Ariana is further extended to a part of Persia and of Media, as also to the Bactrians and Sogdians on the north; for these speak approximately the same language, but with slight variations….According to the Histories of Herodotus, there were six Median tribes: Thus Deioces collected the Medes into a nation, and ruled over them alone. Now these are the tribes of which they consist: the Busae, the Paretaceni, the Struchates, the Arizanti, the Budii, and the Magi."……The Voice of the Prophets: Wisdom of the Ages, Volume 7 of 12…….By Marilynn Hughe 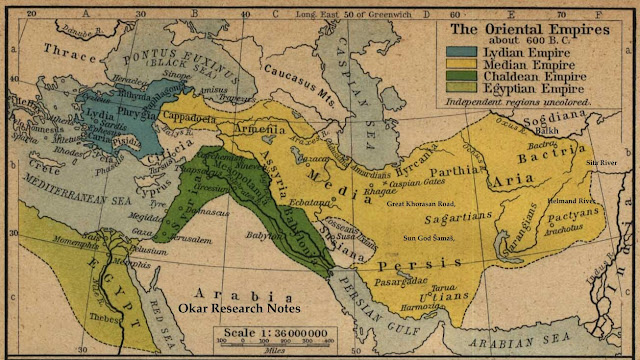 "……the Median city Rhagae, which was regarded by the Zoroastrians as one of Ahuramazda's special creations and was governed by a Zoroastrian leader. The Arabian geographer Yâqût ar-Rûmî (1179-1229 CE), writes about this town and identifies the Zoroastrian leader with the first among the Magians. Ustûnâwand [near Rhagae] is said to have been in existence for more than three thousand years, and to have been the stronghold of the Masmoghân of the land during the times of paganism. This word, which designates the high priest of the Zoroastrian religion, is composed of mas, 'great', and moghân, which means 'Magian'…….http://www.iranchamber.com/religions/articles/magians.php 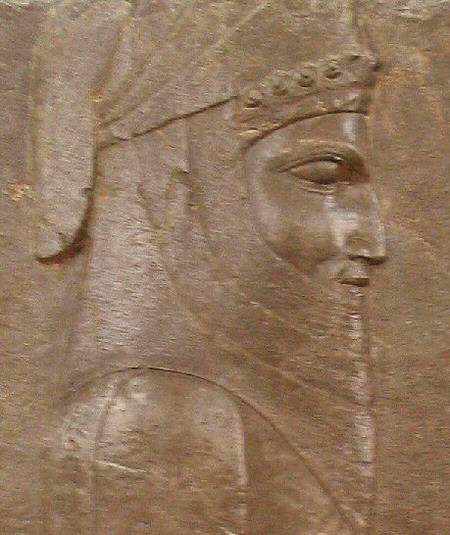 Persepolis: Apadana, North Stairs Relief……the relief of the northern stairs of the Apadana at Persepolis, now in the Tehran archaeological museum, is one of the most important examples of Achaemenid art. It shows how a king (usually identified with Darius the Great) and his crown prince receive an important official, perhaps Pharnaces……The first man behind the great king has a turban that can be identified as the cap of one of the Magians, the sacrificial specialists of the Persian empire. He is probably the Masmoghân, the chief Magian and supreme religious leader ….The lower part of the turban can be put before the mouth, so that the Magian did not pollute the sacred fire with his breath. From the holy book of Zoroastrianism, the Avesta, we know that the felt turban is called pâdam.

".... the Arabian geographer Yâqût ar-Rûmî (1179-1229 CE), who writes about a town named Rai, which certainly is Rhagae: Ustûnâwand, a celebrated fortress in the district of Danbawand, in the province of Rai. It is very old, and was strongly fortified. It is said to have been in existence for more than three thousand years, and to have been the stronghold of the Masmoghân of the land during the times of paganism. This word, which designates the high priest of the Zoroastrian religion, is composed of mas, 'great', and moghân, which means 'Magian'. .....We may therefore assume that Rhagae was the seat of a dynasty of Zoroastrian leader, who may or may not have been great magians. (What ar-Rûmî means with 'Magian' is unclear.)....In the Summer of 521 BCE, it was the place where the Median rebel king Phraortes was arrested by troops of the new Persian king Darius I the Great. In the Summer of 330 BCE, the last Persian king, Darius III, fled through Rhagae and was killed soon afterwards by Bessus."....http://tajikam.com

The famous Macedonian philosopher Aristotle (384-322), who had not spent a part of his life in Persia's western territories for nothing, felt himself forced to state explicitly 'that the Magians neither know nor practice sorcery' (The Magian, fr.36 Rose)……http://www.iranchamber.com/religions/articles/magians.php

"….. the Athenian author Xenophon (c.430-c.355), who visited the Achaemenid Empire in 401, calls the Magians experts 'in everything religious' (Cyropaedia 8.3.11). He also knows that the Magians sing hymns to the rising sun and all known gods (8.1.23)….……http://www.iranchamber.com/religions/articles/magians.php

"The lan-sacrifice probably was a kind of fire sacrifice, because the Persepolis fortification tablets also call the Magians 'fire kindlers'. The Greek geographer Strabo of Amasia (64 BCE-c.23 CE) translates this as pyrethoi and is a more explicit about this ritual. "In Cappadocia -for there the sect of the Magians, who are also called fire kindlers, is large- they have fire temples [pyrethaia], noteworthy enclosures; and in the midst of these is an altar, on which there is a large quantity of ashes and where the Magians keep the fire ever burning. And there, entering daily, they make incantations for about an hour, holding before the fire their bundle of rods and wearing round their heads high turbans of felt, which reach down their cheeks far enough to cover their lips…….Strabo, Geography 15.3.15 ……The lips were probably covered to prevent their breath to pollute the fire. How one can sing in this way, is one of the unsolved mysteries of ancient religion. From the holy book of Zoroastrianism, the Avesta, we know that the felt turban is called pâdam and the sacred twigs barsom. "……http://www.iranchamber.com/religions/articles/magians.php

"In the winter of 331/330, the Macedonian king Alexander the Great invaded Persia, and during the next months, he put an end to reign of the Achaemenid dynasty. Our Greek sources mention Magians at Alexander's court and we may asume that they were performing the usual incantations, prayers and sacrifices. This proves that there was collaboration between at least some Magians and the conqueror. …..However, it is equally certain that Alexander destroyed Zoroastrian sanctuaries, persecuted priests and destroyed religious writings. According to one source, the 'accursed Alexander' also 'slew those who went in the garments of Magians' (click here for three texts on the subject). It seems that many Zoroastrians went to Drangiana where they taught each other what they remembered of the correct rituals. The inaccessible parts of northern Media were also a refuge for the faithful, who were protected by a nobleman named Atropates."……http://www.iranchamber.com/religions/articles/magians.php

Atar……The Persian god of all fire and of purity, son of Ahura Mazda….Atar (Avestan ātar) is the Zoroastrian concept of holy fire, sometimes described in abstract terms as "burning and unburning fire" or "visible and invisible fire" (Mirza, 1987:389).

Pyraea…..Pyraea,' fire temples, set apart solely for the preservation of the sacred fire…..

Banks of the Aras (vanguhi daitya) Araxes (actually the Oxus)

Email ThisBlogThis!Share to TwitterShare to FacebookShare to Pinterest
Labels: Avesta