Sumerian mythology had a parallel to the Eden garden in Dilmun, the dwelling-place of the immortals where sickness and death were unknown....Gilgamesh had to pass through Mount Mashu to reach Dilmun in the Epic of Gilgamesh.... Mount Mashu was one of two ("twin") mountains that held up the sky at the eastern and western extremities of the world. The Sumerian versions of the Gilgamesh epic demonstrate that the earlier versions of the myth sited the Cedar Mountain to the east, in the direction of the rising of Utu, the Sumerian sun god....Dilmun, sometimes described as "the place where the sun rises" and "the Land of the Living", is the scene of some versions of the Sumerian creation myth, and the place where the deified Sumerian hero of the flood, Utnapishtim (Ziusudra), was taken by the gods to live forever. Thorkild Jacobsen's translation of the Eridu Genesis calls it "Mount Dilmun" which he locates as a "faraway, half-mythical place"....http://en.wikipedia.org/wiki/Dilmun

"1000-550 BC - Bactrian Kingdom.....Nothing is more evocative of the history of ancient Afghanistan as the name of Balkh as it is linked to the epic of the Aryan people. One thinks of the land of Hystaspa, Yama, and Zoroastre. What is certain is that by the third millennium B.C. the so called Bactrian civilization places itself between the septentrional cultures of Central Asia, Ouzbek, and Tadjik, and the ones from the Indus valley to the South and Iran to the West.....This country was traditionally said to have first been peopled by the descendants of Gomar, the grandson of Noah, and for some time, they were called Chomarians, and their metropolis Chomara, appellations derived, with very little corruption, from the name of that patriarch. Afterwards Bactria became the capital of the kingdom; and, according to Q. Curtius, both the kingdom and its capital were denominated from the river Bactrus, which fertilized the fields through which it rolled, and washed the walls of that famous and almost impregnable city. But the name of the river upon which Bactria was built, according to Pliny, was Zariaspa, and, according to Ptolemy, Dargidus......It will not, however, be impossible to reconcile the accounts of Curtius and Pliny, if what the latter affirms be allowed, that the ancient name of Bactria was Zariaspe, which is also affirmed by Strabo. In the same manner the river, upon which the city was built, may have also changed its name, or borne different names in different countries. Ptolemy's account, however, is inconsistent with both; for he places the city in the interior of the kingdom, while they assert, that it was situated at the foot of the Paropamisus, the southern boundary of the country. Bactria, in latter ages, was called Balk, a name which it bears at the present day."....http://www.globalsecurity.org/military/world/afghanistan/history-bactria.htm

"Some scholars maintain that the Sumerians may have originated from the mountainous regions of southwestern Iran, since their epic poems refer several times to western part of Iran as their original homeland. Samuel Noah Kramer, a renowned expert in Sumerian history says, "There is some reason to believe that their original home had been in the neighborhood of a city called Aratta, which may have been near the Caspian sea: Sumerian epic poets say something of Aratta, and its people were said to speak the Sumerian language". Martha Lamberg Karlovsky, notes the "The kingdom of Elam and its somewhat better-known neighbor, Sumer, were the two earliest urban states to arise in the Mesopotamian area during the fourth millennium B.C. Proto-Elamite inscriptions and early Sumerian ones are the earliest known Mesopotamian writings, which are the oldest known anywhere"."....http://en.wikipedia.org/wiki/Dilmun

Charles A. Wiesman, in The Origin Of Race And Civilization, suggests that the Eden of the Bible was located on the Pamir Plateau in central Asia....."The location of the Garden of Eden was the Pamir Plateau which has four rivers flowing out of it as described in Genesis 2:10-14. Pamir, the site of Eden, lies east of Mesopotamia and Persia where ancient tradition (as well as Genesis 2:8) places it's location. East of Eden lies the Tarim Basim, the original homeland of the Adamic race and location of the Great Flood of Genesis Chpt. 7."

The writer Robert Middleton says that Taoist and Buddhist teachings locate paradise in China’s far west, and that early Europeans speculated that the Pamirs were the original Garden of Eden....Tajikistan and the High Pamirs: A Companion and Guide by Robert Middleton, Huw Thomas 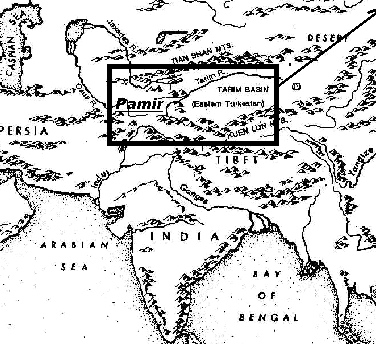 "Charles A. Wiesman, in The Origin Of Race And Civilization, suggests that the Eden of the Bible was located on the Pamir Plateau in central Asia: 'The location of the Garden of Eden was the Pamir Plateau which has four rivers flowing out of it as described in Genesis 2:10-14. Pamir, the site of Eden, lies east of Mesopotamia and Persia where ancient tradition (as well as Genesis 2:8) places it's location. East of Eden lies the Tarim Basim, the original homeland of the Adamic race and location of the Great Flood of Genesis Chpt. 7."....There are at least three possible locations for the lost Garden of Eden. On the above map we see two of the three, the Urartian Location and the Sumerian Location. On the below map we show all three locations, the two from above and a third located on the Pamir Plateau in central Asia at roughly 73° x 38° on the Globe." ....http://www.biblestudysite.com/eden.htm

"The main branch of the Amu Daria or Oxus forms an outlet to Lake Victoria, several others of its tributaries flowing also from the plateau, as seen on our map. The Oxus is still called by the natives the Gihun. Both the Chitral and the Gilgit branches of the Indus. have their origin close to Lake Victoria on the southern side of the Pamirs, and so also has the Yarkand River, which together with the Kashgar forms the Tarim River.....the Oxus is known as the river Jayhoun (جيحون) which is derived from Gihon, the biblical name for one of the four rivers of the Garden of Eden. 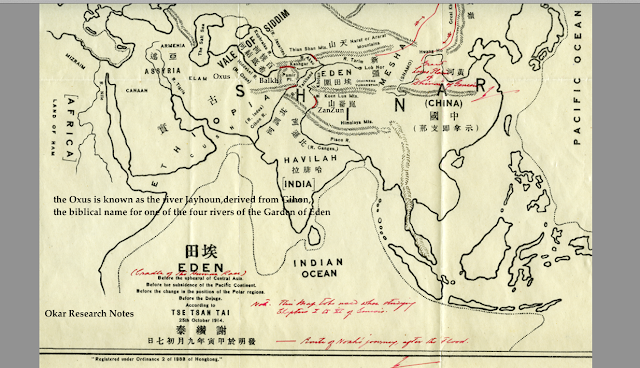 Tse Tsan Tai’s 1914 vision of the Garden of Eden in China; as it appeared in his book The Creation, The Origin of the Chinese, and the Real Situation of Eden....http://brookwilensky-lanford.com/maps/

'... the name "Eden" is possibly from the Akkadian edinnu, derived from a Sumerian word meaning "plain" or "steppe"....."Kush" is thought to be referring to Cossaea, a Greek name for the Kassite lands north of Elam, immediately to the east of ancient Babylon

"“And a river went out of Eden to water the garden; and from thence it was parted, and became into fur heads. The name of the first is Pison: that is it which compasses the whole land of Havilah, where there is gold; and the gold of that land is good: there is bdellium and the onyx stone. And the name of the second river is Gihon: the same is that compasseth the whole land of Ethiopia. And the name of the third river is Hiddekel: that is it which goeth toward the east of Assyria. And the fourth river is Euphrates.....Genesis, states that one river went out of Eden and divided into four heads.....Such a location of four rivers starting from one source we find on the Pamir plateau in Central Asia, between the Tian Shan mountains on the north and the Hindu Cush on the south. From the lakes of that plateau issue four great rivers: the Indus, the Jaxartes, the Oxus, and Tarim. The Oxus is still called by the natives the Dgihun or Ghon; the Chitral branch of the Indus answers the description of the Pison; the Jaxartes is the original Euphrates; and the Tarim going toward the east is in all probability the Hiddekel.".....http://israelect.com/reference/WillieMartin/The_Garden_of_Eden.htm

Professor S.H. Buchanan on pages 125 and 126 of his work, The World and the Book, quotes the french Orientalist, M. Renan:....“If we search to determine the country which best satisfies the geography of the first chapters of Genesis, it is necessary to avow that all conducts us to the region of the Imaus, where the most solid inductions place the cradle of the Human Race. There is found, as in the Paradise of Genesis, gold, precious stones, bdellium. This point is that of the world of which one is able to say with the most truth that four of rivers issue from the same source. Four immense currents of water: the Indus, the Helmend, the Oxus, and the Gaxarles, take there their rise, flowing in directions the most opposite. The second chapter of Genesis presents to us a traditional geography which has no connection with the ordinary geography of the Hebrews; but which, on the contrary, offers the most astounding resemblance with the Turanian system. The Pison, which issues from the Garden of Eden, situated in the East, is very probably the high Indus, and the country of Havilah, seems well to be the country of Darada towards Chachmises, celebrated for its riches. The Gihon is the Oxus, and it is without doubt by substitution of more modern names that we find the Tigri and Euphrates at the side of the other rivers indicated. Thus, all invites us to place the Eden of the Semites ate the point of the separation of the waters of Asia at the umbilici of the world, toward which, as with index finger, all the races seem to point as that recognized in their most primitive traditions.”

Sir Gaston Maspero, late director-general of Egyptian antiquities in his Ancient History of the Orient, also identifies the Pamir plateau as the location of the Garden of Eden.....“All have preserved, mixed with the vague legends of their infancy, the memory of a primitive country where their ancestors had lived before their dispersion. This was a high mountain, or better, an immense plateau of a square figure, and so elevated that it seemed as if suspended between the heavens and the earth. From the interior flowed a great river, which soon divided itself into four arms or canals, spreading out over the four surrounding countries. There was the umbilici of the world and the cradle of humanity. The people settled between the Mediterranean and the Tigris located this legendary country in the East. The people of ancient Persia and India conceived it situation in the North. The moderns have succeeded in determining its site more exactly than the ancients had done. They have placed it in the mountains of Belurtag, near the point where the chain unites with the Hamalaya. There in effect, and there only, is found a country that satisfies all the geographic descriptions preserved in the sacred books of Asia. From the Plateau of Pamir, or better, from the mountain mass of which this plateau is the center, four great rivers issue, the Indus, the Helmend, the Oxus, and the Gaxares, which flow in direction the most diverse corresponding sufficiently to the four rivers of tradition.”

"Renan tells us, quoted by Buchanan, pp. 123-124:.....“Thus everything invites us to place the Garden of Eden in the mountains of Belurtag, at the point where this chain unites with the Himalaya, toward the Plateau of Pamir... We are conducted to the same point, according to Brunoff, by the most ancient and authentic texts of the Zend-Avesta. The Hindu traditions also contained in the Mahabbarata and the Puranas, converge to the same region. There is the true Meru (Ararat) (of the Hindus), the true Albordj (of the Persians), the true river Arvanda, from which all rivers take their source, according to Persian tradition. There, according to the opinions of almost all the populations of Asia, is the central point of the world, the umbilici, the gate of the universe. There is the Uttarakura; ‘the country of happiness,’ of which Magesthanes writes. There is, finally the point of common attachment of the primitive geography, both of the Semitic and the Indo-European races.”