"The Roman Republic (Latin: Res Pvblica Romana) was the period of the ancient Roman civilization when the government operated as a republic. It began with the overthrow of the Roman monarchy, traditionally dated around 509 BC..... Historians have variously proposed the appointment of Julius Caesar as perpetual dictator in 44 BC, the defeat of Mark Antony at the Battle of Actium in 31 BC, and the Roman Senate's grant of extraordinary powers to Octavian under the first settlement and his adopting the title Augustus in 27 BC, as the defining event ending the Republic.".....http://en.wikipedia.org/wiki/Roman_Republic

"Roman religious beliefs date back to the founding of Rome, around 800 BC. (legendary founding of Rome by Romulus and Remus ( 753 B.C. )....However, the Roman religion commonly associated with the republic and early empire did not begin until around 500 BC, when Romans came in contact with Greek culture, and adopted many of the Greek religious beliefs. Private and personal worship was an important aspect of religious practices. In a sense, each household was a temple to the gods. Each household had an altar (lararium), at which the family members would offer prayers, perform rites, and interact with the household gods. Many of the gods that Romans worshiped came from the Proto-Indo-European pantheon, others were based on Greek gods. The two most famous deities were Jupiter (the king God) and Mars (the god of war)."......http://en.wikipedia.org/wiki/Roman_Republic 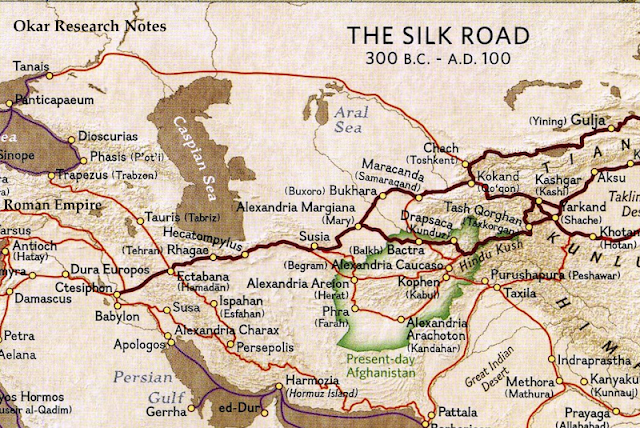 Early Dark Ages I (490 - 600 AD).....Beginning of "Turkic" Avar Kingdom in SE Europe (558): Avars, a Central Asian Turkic people, are driven west into Europe by Persians & other, more powerful Turkic empires. They are paid off by the Byzantines to settle the area north of the Danube River, where they succeeded in driving Germanics out of the area. They also displaced large groups of Slavs who were also settled north of the Danube. The Avar raids force them into the Balkans, where they settled lands abandoned by Germanic peoples. This group of Slavs were forced to pay tribute to the Avars."....http://www.worldology.com/Europe/early_dark_ages.htm

"Jalal ad Din Muhammad Rumi known as ‘Rumi’ in English was a great mystical poet, jurist, theologian and master of the spiritual world. He was born in Wakhsh or Tajikistan on 30th September 1207. His name literally means ‘Roman’ as he lived most of his life in the area called ‘Rumi’ which was ruled by the Roman Empire. He belonged to the Persian heritage. Because of the quarrels taking place in Khorasan, his family moves to Konya, the Anatolian city (Present day Turkey). His father, Bahad ud Din Walad was also a mystic from Wakhsh and his mother was Mo’mina Khatun. The family was a religious one starting from the previous generations and Rumi carried on with the family tradition by preaching the Hanafi rites. At 24 years of age, Rumi was an able religious scholar and positive science expert."....http://www.famousauthors.org/rumi

"It has been proposed on the basis of phonetic similarities that the name Gesar reflects the Roman title Caesar, and that the intermediary for the transmission of this imperial title from Rome to Tibet may have been a Turkish language, since kaiser (emperor) entered Turkish through contact with Byzantium, where Caesar (Καῖσαρ) was an imperial title. Some think the medium for this transmission may have been via Mongolian Kesar. The Mongols were allied with the Byzantines, whose emperor still used the title. Numismatic evidence and some accounts speak of a Bactrian ruler Phrom-kesar, specifically in the Turkish dynasty in Gandhāra, which was ruled by a Turkish Phrom-kesar ("Caesar of Rome"),who was father-in-law of the king of Khotan, around the middle of the 8th century CE.In early Bön sources, Phrom-kesar is always a place name, and never refers, as it does later, to a ruler. In some Tibetan versions of the epic, a king named Phrom Ge-sar or Khrom Ge-sar figures as one of the kings of the four directions – the name is attested in the 10th century and this Phrom/Khrom preserves an Iranian form (*frōm-hrōm) for Rūm/Rome. This eastern Iranian word lies behind the Middle Chinese word for (Eastern) Rome (拂菻:Fúlǐn), namely Byzantium (phrōm-from<*phywət-lyəm>).".....https://en.wikipedia.org/wiki/Epic_of_King_Gesar

"The Byzantine Empire was the predominantly Greek-speaking continuation of the Roman Empire during Late Antiquity and the Middle Ages. Its capital city was Constantinople (modern-day Istanbul), originally known as Byzantium. Initially the eastern half of the Roman Empire (often called the Eastern Roman Empire in this context), it survived the 5th century fragmentation and collapse of the Western Roman Empire and continued to thrive, existing for an additional thousand years until it fell to the Ottoman Turks in 1453. During most of its existence, the empire was the most powerful economic, cultural, and military force in Europe. Both "Byzantine Empire" and "Eastern Roman Empire" are historiographical terms applied in later centuries; its citizens continued to refer to their empire as the Roman Empire (Ancient Greek: Βασιλεία Ῥωμαίων, tr. Basileia Rhōmaiōn; Latin: Imperium Romanum),and Romania (Ῥωμανία).".....http://en.wikipedia.org/wiki/Byzantine_Empire

"Ottoman Empire........Mehmed II and Ecumenical Patriarch of Constantinople Gennadios. After the Fall of Constantinople, Mehmed claimed the title of "Caesar" of Rome (Kayser-i Rûm), although this claim was not recognized by the Patriarch of Constantinople, or Christian Europe. Mehmed's claim rested with the concept that Constantinople was the seat of the Roman Empire, after the transfer of its capital to Constantinople in 330 AD and the fall of the Western Roman Empire. Mehmed also had a blood lineage to the Byzantine Imperial family; his predecessor, Sultan Orhan I had married a Byzantine princess, and Mehmed may have claimed descent from John Tzelepes Komnenos. He was not the only ruler to claim such a title, as there was the Holy Roman Empire in Western Europe, whose emperor, Frederick III, traced his titular lineage from Charlemagne who obtained the title of Roman Emperor when he was crowned by Pope Leo III in 800 - although never recognized as such by the Byzantine Empire. .......In the Middle East, the Persians and later the Arabs continued to refer to the Roman and Byzantine emperors as "Caesar" (in Persian قیصر روم Qaisar-e-Rūm). Thus, following the conquest of Constantinople in 1453, the victorious Ottoman sultan Mehmed II was the first of the rulers of the Ottoman Empire to assume the title "Caesar of the Roman Empire" (Ottoman Turkish Kayser-i-Rûm). Here, the Caesar title should not be understood as the minor title it had become, but as the glorious title of the emperors of the past, a connotation that had been preserved in Persian and Arabic. The adoption of the title also implied that the Ottoman state considered itself the continuation, by absorption, of the Roman Empire, a view not shared in the West. Acting in his capacity as Caesar of the Roman Empire, Mehmed reinstated the defunct Ecumenical Patriarchate of Constantinople."......http://en.wikipedia.org/wiki/Caesar_(title)