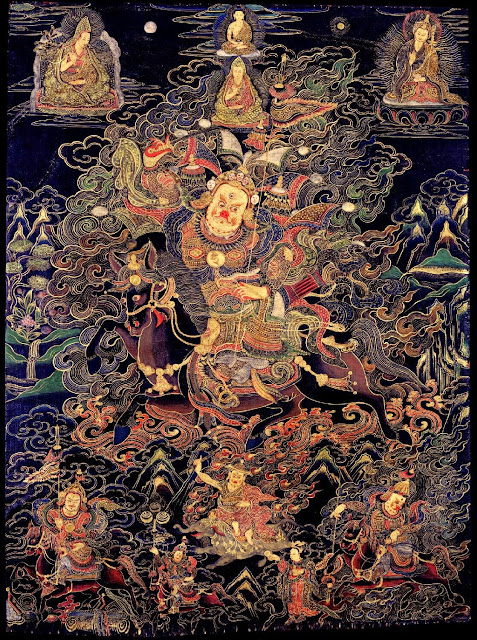 Tsangpa Karpo. White in colour (gold painted) with one face and two hands he holds upraised in the right a curved sword and in the left a vajra-tipped lasso and lance. Attired in the garb of a wariour, the head is crowned with a helmet topped with a white conch shell and peacock feathers. In the middle of the chest, marked with the Tibetan letter 'hrih,' is a golden mirror. Riding atop a dark brown horse, he is surrounded by flames of various colour and dark rolling smoke.At the top center is the buddha Amitabha with the hands in meditation holding a begging bowl. A lama wearing a yellow hat sits directly below. At the top right is Padmasambhava. At the left is the 5th Dalai Lama holding a single white lotus in the right hand, wearing a yellow hat and meditation cloak. Various retinue figures fill the foreground......

"Gaṇa: The Gaṇas (Devanagari: गण) are attendants of Shiva and live in Kailash. They are often referred to as the bhutaganas, or ghostly hosts......Ganesha was chosen as their leader by Shiva, hence Ganesha's title gaṇa-īśa or gaṇa-pati, "lord of the gaṇas".... Dictionary of Hindu Lore and Legend (ISBN 0-500-51088-1) by Anna L. Dallapiccola

"In Vedas......Ganas have been narrated in Vedas in the form of assemblies of warriors as is clear from the following sutras of Rigveda (RV 3-26-6):
व्रातं व्रातं गणम् गणम् Vrātam Vrātam gaṇam gaṇam
Gana in brief means an assembly. Ganatantra (republic) means a state run by assemblies. The representative members of clans were known as ganas and their assembly as sanghas, there chief as ganadhipati or Ganesha and Ganapati."......

"belchen kekho........a primordial being named Belchen Kekho, along with 359 other Kekho gods.......Other important deities include the 360 Kekho, who live on the holy mountain Tise (Kailash, which is also believed to be the residence of the Hindu god Siva...Both of these groups are associated with the 360 days of the year....there was only emptiness not absolute void Earth air fire water and space were all combined to make the cosmic egg. o The egg produced Belchen Kekho along with 359 other Kekho gods. The white yak of being was born He ripped the surface with his horns which produced mountains...."...Introduction to Tibetan Buddhism.....By John Powers

"Sidpa Yemön Gyelpo (King of the Primordial Aspiration of Existence), which describes the origin of existence (srid pa ‘i grol phug) in the following way. First of all, being arose from nothingness, then, from the junction of congruent causes, the elements came into being. Then, from the deities of the dear light existence manifested, and from the deities mankind descended, becoming differentiated into special and ordinary men. Thus there arose the four ritual traditions known as ‘The Human Generations of the Origins of Existence’: the ‘Great Rites of the Original Formation of the Kalpa’ (bskal srid chags pa’i gzhung chen), the ‘4 Divisions of the Fortresses of Aspiration’ (smon lam mkhar gyi gling bzhi), the ‘100.000 Human Generations of the Origin of Existence’ (srid pa mi’u’i rguud ‘bum) and the ‘Great Rites for the Armed Protector Drala’ (mtshon mgon sgra bla ‘i gzhung chen). ......The luminous egg hatched by the force of its own light and its own rays, and from the dear light that spread in space were born the 360 Thorse (‘thor gsas: Scattered Deities), men of light who took on the task of protecting virtuous actions."....http://yungdrung-rignga-ling.forums-free.com/the-origin-of-existence-t667.html