"There are three biographies of Tonpa Shenrab. The earliest and shortest one is known as Dodu (mDo-'dus: 'Epitome of Aphorisms'); the second is in two volumes and is called Zermig (gZer-mig: 'Piercing Eye'). These two accounts were rediscovered as terma in the 10th and 11th centuries respectively. 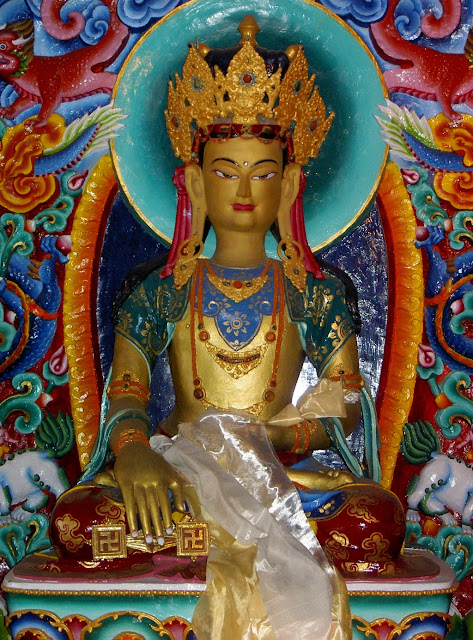 "Tonpa Shenrab Miwoche came into this world to teach Sutra, Tantra and Dzogchen, but with specific focus on Tantra and Dzogchen. His teachings, called Yungdrung Bon or ‘Eternal Bon’, are divided into the nine ways of the path to enlightenment.".....http://bonshenling.org/bonhistory/

SHENRAB.......Excerpted from a publication by Triten Norbutse and Yungdrung Bön Monastic Center......The founder of Bon religion is the Lord Shenrab Miwo........In past ages there were three brothers, Dakpa, Selwa et Shepa, who studied the Bon doctrines in the heaven named Sipa Yesang, under the Bon sage Bumtri Loggi Chechen. When their studies were completed, they visited the God of Compassion Shenlha Ökar and asked him how they could help the living beings submerges in the miseries and sorrow of suffering. Shenlha advised them to act as guides to mankind in three successive ages of the world. To follow his advice the eldest brother, Dakpa, completed his work in the past world age. The second brother, Selwa, took the name Shenrab and became the teacher for this present world age. The youngest brother, Shepa, will come to teach in the next world-age.................

"The Lord Shenrab was born in the Barpo Sogye Palace, to the south of Mont Yung-drung Gutsek. He was born a prince, married while young and had children. At the age of 31 he renounced the world and lived in austerity, teaching the doctrine. During hiswhole life his efforts to propagate the Bon religion were obstucted by the demon Khyabpa Lakring. This demon fought to destory or impede the work of Tönpa Shenrab, until he was eventually converted and became a disciple of Shenrab. one, pursuing the demon to regain his stolen horses. Tönpa Shenrab arrived in Tibet, it was his only visit to Tibet. There, he imparted some instructions concerning the performance of rituals but, on the whole, found the land unprepared to receive fuller teachings. Before leaving Tibet, he prophesied that all his teachings would flourish in Tibet when the time was ripe. Tönpa Shenrab departed this life at the age of 82.

" The country of Olmo Lungring where Tonpa Shenrab descended from the celestial spheres and took up incarnation among human beings as an Iranian prince. The mysterious land of Olmo Lungring (`ol-mo lung-rings) or Olmoling (`ol-mo`i gling) is said to be part of a larger geographical region to the northwest of Tibet called Tazig (stag-gzig, var. rtag-gzigs), which scholars identify with Iran or, more properly, Central Asia where in ancient times Iranian languages such as Avestan and later Sogdian were spoken. According to the “gZer-mig” the traditional etymology of the name Olmo Lungring is as follows: “`ol” means “unborn”, “mo” “undermined”, “lung” “the prophetic words of Shenrab”, and “rings” “everlasting compassion”. According to the “gZi-brjid”, Olmo Lungring was also known as Shambhala in Sanskrit and it continues to be known by this name among Tibetan Buddhists even today. Moreover, it is said that in ancient times it encompassed fully one-third of the known world a statement which could apply to the historical Persian empire."

There are three written acounts of Tönpa Shenrab. The earliest and shortest one is known as Dodü (mDo-'dus),"Epitome of Aphorism". The second which is in two volumes is called Zermik (gZer-mig), "Piercing Eye". These two accounts date from the 10th and 11th centuries respectively. The third and largest is in twelve volumes known shortly as Ziji (gZi-brjid), "The Glorious". It belongs to the category of scriptures known as "spiritual transmission" (snyan-rgyud) It is believed to have been dictated to Loden Nyingpo (Blo-ldan snying-po)who lived in the XIV century.

Tonpa Shenrab Miwo (ston pa g.shen rab mi wo) the founder of the Yungdrung Bon religion 8,000 years ago in the land of Tajik to the west of Tibet.

The life story of Tonpa Shenrab along with the recounting of his previous lives are found in three principal texts: the first, and considered the oldest, is the Dodu (Wylie: mdo 'dus) in one volume and twenty-four chapters. Second is the Zermig (gzer mig) in two volumes and eighteen chapters discovered in the 10th century, followed by the Zije (Wylie: gzi brjid) comprised of twelve volumes and sixty-one chapters discovered in the 14th century by Tulku Loden Nyingpo. The last two texts belong to the Revealed Treasure tradition (Tib.: ter ma) of the Bon religion.

(1) gZer-mig and gZi-brjid is published by the Foundation Bonpo, Dolanji, 1965 and 1967-1969 respectively. Extracts of the gZi-brjid were published and translated by D.L. Snellgrove, The Nine Ways of Bon, London Oriental Series, vol.18, London 1967.

Tonpa Shenrab taught his doctrines in two systems:
- The first classification is called Thegpa Rimgu'i Bön, the 'Bön of Nine Successive Stages' ... of which there are three versions: the Loter (lho gter) or 'Southern Treasure,' the Jangter (byang gter) or 'Northern Treasure' and the Uter (dBu gter) or 'Central Treasure.
- The second classification is called Gozhi dzonga (sGo bzhi mdzod lnga), 'The Four Portals and the Treasury, the Fifth'.

1 'The teacher descends from the gods of pure light'

4 'The sutra of gShen-rabs taking birth'

5 'The sutra of the young prince's playful sport'

The Sgra Bla, Gods of the Ancestors of Gshen-Rab Mi-Bo..... A brief analysis of the fifth chapter of the gZi brjid, the biography of gShen-rab mi-bo containing a Sang rite dedicated to various classes of Sgra Bla. Although the gZi brjid only dates back to the fourteenth century, it is considered characteristic of the pre-Buddhist Tibetan culture......Chögyal Namkhai Norbu

6 'The sutra of the prince's enthronement'

7 'The sutra of the prince's law-giving'

10 'The sutra explaining the Way of the Shen of Existence

12 'The sutra explaing the Way of the Virtuous Adherers'

13 The sutra explaing the Way of the great ascetics

14 The sutra of the VIIth Way of pure sound

15 The sutra of the VIIIth Way of the primaeval Shen

16 The sutra of the IXth and supreme Way

17 The sutra explaning the bon of the various translations

19 The sutra of the mandala of the Loving Conqueror

20 The sutra of the very form and precious doctrine

21 The sutra of the three tenets taught by the teacher

22 The sutra of the spreading reays that convert sentient beings

23 The sutra explaining cause and effect

24 The sutra of the teacher drawing beings to salvation

25 The sutra of the light of the Blessed All-knowing

26 The liturgy of the All-Good the Ocean of Victory

30 The sutra of the Teacher's assumption of royal power

32 The sutra of the Teacher teaching Bon to the gods

33 The spell of the Fierce Destroyer

34 Mandala of the liturgy of the God of Medicine

35 The sutra of the pure prayer of good conduct

36 The sutra of the Teacher teachung bin to the serpents

37 The sutra of Mara's magical display to the teacher

38 The secret spell the Destroyer of Mara

40 The sutra of removing obstructions and subduing Mara

42 The sutra for establishing the teaching of the IXth Way

43 The sutra for establishing the teaching about relics

47 The spell of the Sacred Light of Vaidurya

50 The sutra establishing the three forms of the doctrine

52 The sutra of the perfecting of austerities, the actions of a Shen

54 The sutra of pure disciplinary rules

55 The basic sutra of the pure regulations of the Shen

57 The sutra of the pure virtuous conduct of the Shen

58 The sutra of removing the hellish evils of King 'Kong'

60 The sutra explaining the meanings of the names, marks and qualities of the buddhas

The Guimet thangka is virtually unknown to scholars in Asia, for it was purchased by a French expedition at the beginning of the twentieth century in what was then southwest China or eastern Tibet. It has remained in France ever since. For ease of reference, I hereafter cite this painting as Shenrab and Confucius, although the thangka itself bears no such title or inscription.Tentatively dated to the eighteenth or nineteenth centuries, Shenrab and Confucius is one of a set of biographical narrative paintings in the Musée Guimet that illustrates twelve important events in the life of Tonpa Shenrab. The thangka has been explored from the perspective of Tibetan-language sources by Per Kvaerne, who has compared its visual content with textual narratives of the life of Tonpa Shenrab (Kvaerne 1986, 1987, 2007).

According to the “gZer-mig” the traditional etymology of the name Olmo Lungring is as follows: “`ol” means “unborn”, “mo” “undermined”, “lung” “the prophetic words of Shenrab”, and “rings” “everlasting compassion”. According to the “gZi-brjid”, Olmo Lungring was also known as Shambhala in Sanskrit and it continues to be known by this name among Tibetan Buddhists even today.

According to the “gZer-mig” and other texts, the region around Tise or Mount Kailas is only a copy in Zhang-zhung of the original in Olmoling. Furthermore, according to the “gZi-brjid”, Dimpling is the same as Shambhala. It is not necessary to pray and do any meditation practice in order to be reborn in Iran or the Central Asia of the USSR, these are quite ordinary earthly places; but it is necessary to pray and to undergo a purification of mind before one can be reborn in Olmo Lungring, or even enter it in this present life, because it is a pure dimension of existence (dag-pa`i zhing-khams). It cannot be seen easily with the ordinary fleshly eye like Iran or Central Asia or even Tibet can. But simply because we do not see it is no proof that it does not exist, for that is the view of the Lokayatas or materialists.

Enlightened Rainbows: The Life and Works of Shardza Tashi Gyeltsen.... by Jean-Luc Achard