"Indian documents written in Kharosthi with ink have been unearthed in Chinese Turkestan……The Kharoṣṭhī script is an ancient Indic script used by the Gandhara culture of ancient Northwest India (primarily modern-day Afghanistan, Pakistan and North India) to write the Gāndhārī language (a dialect of Prakrit) and the Sanskrit language. An alphasyllabary, it was in use from the middle of the 3rd century BCE until it died out in its homeland around the 3rd century CE. It was also in use in Bactria, Gandhara (particularly in the period of the Kushan Empire), Sogdiana (see Issyk kurgan) and along the Silk Road, where there is some evidence it may have survived until the 7th century in the remote way stations of Khotan and Niya.."….http://en.wikipedia.org/wiki/Kharosthi

"The Kharosthi alphabet was used in Gandharan Buddhism as a mnemonic for remembering a series of verses relating to the nature of phenomena. In Tantric Buddhism this list was incorporated into ritual practices, and later became enshrined in mantras."….http://en.wikipedia.org/wiki/Kharosthi

"The Kharosthi alphabet was invented sometime during the 3rd century BC… It was widely used in northwest India and central Asia until the 4th century AD……Unlike the Brahmi script, which was invented at around the same time and spawned many of the modern scripts of India and South East Asia, Kharosthi had no descendants……The Kharoṣṭhī script was deciphered by James Prinsep (1799–1840), using the bilingual coins of the Indo-Greeks (Obverse in Greek, reverse in Pāli, using the Kharoṣṭhī script). This in turn led to the reading of the Edicts of Ashoka, some of which, from the northwest of the Indian subcontinent, were written in the Kharoṣṭhī script….. Since then further material has been found and the script is now better understood….Eventually the Kharosthi Script fell out of use by the 3rd or 4th century CE, and the descendent of Brahmi eventually took hold in the northwestern South Asian."….http://en.wikipedia.org/wiki/Kharosthi

"The study of the Kharoṣṭhī script was recently invigorated by the discovery of the Gandharan Buddhist Texts, a set of birch-bark manuscripts written in Kharoṣṭhī, discovered near the Afghan city of Hadda just west of the Khyber Pass in modern Pakistan. The manuscripts were donated to the British Library in 1994. The entire set of manuscripts are dated to the 1st century CE, making them the oldest Buddhist manuscripts yet discovered."….http://en.wikipedia.org/wiki/Kharosthi

"Kharosthi is a syllabic alphabet - each letter has an inherent vowel /a/. Other vowels are indicated using diacritics. It was written from right to left in horizontal lines….The Kharosthi Script was more or less contemporarily with the Brahmi script, appearing around the 3rd century BCE mainly in modern-day northern Pakistan and eastern Afghanistan, although some examples do occur in India. Like Brahmi, Kharosthi seemed to have been developed for Prakrit dialects (which was the common speech of everyday life as opposed to Sanskrit which was the liturgic language). For instance, the earliest example of Brahmi and Kharosthi did not have the dipthongs /ai/, /au/, and the vocalic /r/ and /l/, which existed in Sanskrit but not in Prakrit. In particular, Kharosthi seemed to be used primarily for the Prakrit dialect of Gandhari, the language of the ancient kingdom of Gandhara. The evidence for this is in the form of a diacritic mark that denotes a transformation of an intervocalic constant (sometimes from a stop to a fricative), which existed in Gandhari."….http://www.ancientscripts.com/kharosthi.html 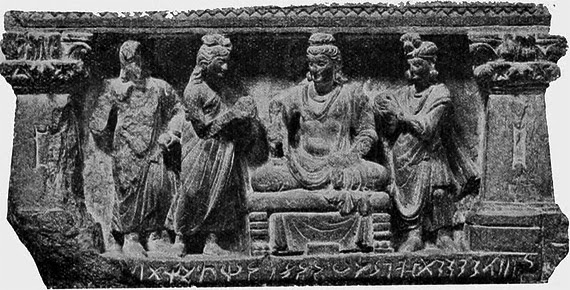 The Indo-Greek Hashtnagar Pedestal symbolizes Bodhisattva and ancient Kharoṣṭhī script. Dated to 384 of unknown era. Found near Rajar in Gandhara, Pakistan. Original is exhibited at the British Museum.

"Niya Ruins ….In 1900, Aurel Stein set out on an expedition to western China and the Taklamakan Desert. In Niya he excavated several groups of dwellings, and found 100 wooden tablets written in 105 CE. These tablets bore clay seals, official orders and letters written in Kharoshthi, an early Indic script, dating them to the Kushan empire."….http://en.wikipedia.org/wiki/Niya_(Tarim_Basin)

Niya Tablets in the Aurel Stein Collection, National Museum, New Delhi….
"His majesty the king gives instructions to the cuvalayina Maltsuta as follows : The sothamga Sugita informs us here that his son Livarazma found in a gold sakasya (= ?) one kampo (= ?) and two golden staters, and that many people of Cadota and the mountains are witnesses. In that matter the tagastas are cheating (nikaremti) the owners. When this sealed wedge-tablet reaches you, etc......... the tagastas are to be stopped from doing injustice to people. …."
http://depts.washington.edu/silkroad/texts/niyadocts.html 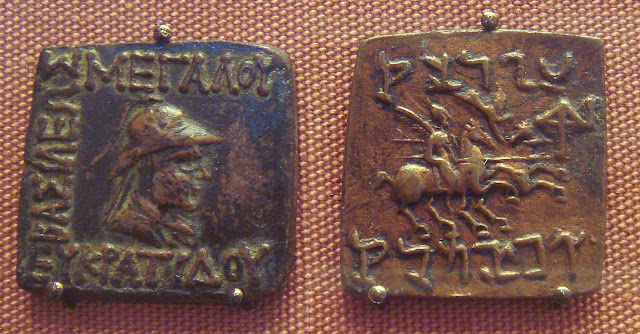 Bilingual coin of Eucratides in the Indian standard (Greek on the obverse, Pali in the Kharoshthi script on the reverse).

Gurgamoya, king of Khotan. Khotan, 1st century CE. Obverse: Kharoshthi legend "Of the great king of kings, king of Khotan, Gurgamoya. Reverse: Chinese legend: "Twenty-four grain copper coin."…Gurgamoya was a king of the Kingdom of Khotan in the 1st century CE. His coins were usually made of bronze and included legends in Kharosthi and Chinese.The Kharoshthi describes the title of the king, while the Chinese give the weight of the coin. The Kharoshti points to relations with northern India, which at that time was ruled by the Kushan Empire, with its powerful ruler Kujula Kadphises, who was also known by the Chinese….Gurgamoya is thought to have ruled circa 30-60 CE."…http://en.wikipedia.org/wiki/Gurgamoya