"Pravarasena I. (270-330), who maintained the realm as a great power, he was the first Vakataka ruler, who called himself a Samraat …(Universal Ruler), Samraat (Sanskrit: samrāṭ or सम्राज् samrāj) is an Ancient Indian title sometimes translated into modern English as "Emperor". The title of empress is Samrãjñī….. most historians call Chandragupta Maurya the first samrāṭ of the Indian subcontinent, because he ruled the whole Indian-Subcontinent. Mauryan Emperor'sChandragupta Maurya and Ashoka are more well known as Samraat Chandragupta Maurya and Samraat Ashoka Maurya because of the vastness of their empire…..Chakravartin (चक्रवर्तिन् cakravartin; Pali cakkavatti), is an ancient Indian term used to refer to an ideal universal ruler, who rules ethically and benevolently over the entire world…..The first references to a cakravala cakravartin appear in monuments from the time of the Maurya Empire (322–185 BCE), dedicated to Chandragupta Maurya and his grandson Ashoka Maurya."….http://en.wikipedia.org/wiki/Vakataka_dynasty

"The Vākāṭaka Empire (Marathi: वाकाटक) was a royal Indian dynasty that originated from the Deccan in the mid-third century CE….The Vākāṭakas, like many coeval dynasties of the Deccan, claimed Buddhist origin. Little is known about Vindhyaśakti (c. 250–270 CE), the founder of the family. Territorial expansion began in the reign of his son Pravarasena I. ….The Gupta emperor Chandragupta II married his daughter into Vakataka royal family and with their support annexed Gujarat from the Saka Satraps in fourth century CE….. The Vakatakas are noted for having been great patrons of arts, architecture and literature. They led great amount of public work and their monuments are a visible legacy. The rock-cut Buddhist viharas and chaityas of Ajanta Caves (a UNESCO World Heritage Site) was built under the patronage of Vakataka Emperor Harishena."…http://en.wikipedia.org/wiki/Vakataka_dynasty 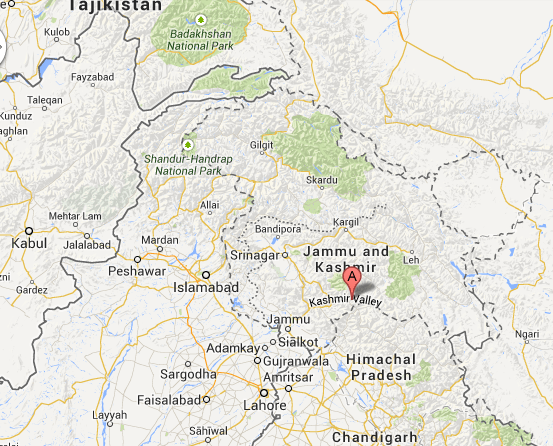 "Ancient Srinagar, Kashmir…..has a long history, dating back at least to the 3rd century BC, and has been known by different names. The city is said to have been founded by the King Pravarasena II who named it Parvasenpur. The city was then a part of the Maurya Empire…..Ashoka introduced Buddhism to the Kashmir valley, and the adjoining regions around the city became a centre of Buddhism. In the 1st century, the region was under the control of Kushans, based out of modern Pakistan and Afghanistan. Several rulers of this dynasty strengthened the Buddhist tradition. Vikramaditya (of Ujjain) and his successors probably ruled the regions just before the city fell to the control of the Huns-a nomadic tribe from central Asia in the 6th century."…..http://en.wikipedia.org/wiki/Srinagar

"Kashmir has been one of the most important centres for the spread and development of Buddhism. Buddhism was an important part of the classical Kashmiri culture, as is reflected in the Nilamata Purana and the Kalhana's Rajatarangini. Buddhism is generally believed to have become dominant in Kashmir in the time of Emperor Ashoka, although it was widespread there long before his time. It enjoyed the patronage not only of the Buddhist rulers but of Hindu and early Muslim rulers too. From Kashmir, it spread to the neighbouring Ladakh…..The first known ruler of Kashmir, Gonanda (mentioned by Kalhana in his Rajatarangini), was related to Jarasandha, who ruled Magadha during the time of the Kurukshetra war. Surrendra is perhaps the first Buddhist ruler of Kashmir. He erected the first viharas in Kashmir. One of these, known as Narendrabhavana, was in the city of Sauraka (Suru, beyond the Zoji La.) The other vihara was at Saurasa, corresponding to the village Sowur (Soura) on the shore of Anchar Lake to the north of Srinagar…… though it was situated far from the Mauryan capital (Pataliputra), Kashmir enjoyed all the benefits of Ashoka's benign rule. The provincial capital Shrinagari (Srinagar) was 'resplendent with prosperity and wealth.' ….. Buddhism and Shaivism flourished side by side in Kashmir during Ashoka's time and received the Emperor's patronage in equal measure. "…..http://en.wikipedia.org/wiki/Buddhism_in_Kashmir

"Ashoka's successors…..Buddhism suffered a temporary eclipse during the reign of Ashoka's successors Jalauka and Damodara. Kalhana, a Hindu historian, asserted that large number of Buddhist scholars were vanquished in debates with Jalauka's guru Avadhuta, and hence traditional observances were slowly revived. Later, however, Jalauka created a big vihara, the Krityashramavihara, in the vicinity of Varahamula (Baramulla), which was still existing as late as the 11th century. The history of Kashmir after Damodara is not certain until the time of the Kushanas……The Kushana period saw a great resurgence of Buddhism in Kashmir, especially during the reign of Kanishka. The fourth Buddhist Council was held in Kashmir, under the presidency of Katyayaniputra, in Kanishka's time. The south Indian Buddhist philosopher Nagarjuna lived in Kashmir during the Kushana period."…..http://en.wikipedia.org/wiki/Buddhism_in_Kashmir

"Post-Kushana……During the reign of Abhimanyu, which in Kalhana's chronicle follows that of Kanishka, Buddhist scholars under the guidance of Nagarjuna defeated the Shaivite clergy in debates, encouraging people to choose Buddhism. However, during the time of Chandradeva, revival of knowledge of the works of Patanjali, like the Mahabhashya which had become rare, led to a resurgence of Shaivism. By the time of Gonanda, the old philosophy was completely revived. Nothing is known about the religious affiliations of Pratapaditya, a scion of the Gupta dynasty and his successors, except that they are stated to have ruled well, and fullest liberty of faith was accorded. Buddhism is stated by Kalhana and Hiuen Tsang to have suffered severe setbacks under the Huns, especially under Mihirakula, whom Hiuen Tsang describes as a great persecutor of the Buddhists."…..http://en.wikipedia.org/wiki/Buddhism_in_Kashmir

"Ajanta Caves….most of the work took place over the very brief period from 460 to 480 CE, during the reign of Emperor Harishena of the Vakataka dynasty."….http://en.wikipedia.org/wiki/Ajanta_Caves