Orissa, Oddiyana & the Indo-European Migration (1500 BC)

"Orissa in central south-eastern India, was founded by Indo-Europeans who migrated into India from around 1500 BC, but who were originally from Central Asia."….http://www.historyfiles.co.uk/KingListsFarEast/IndiaKalinga.htm

"Indo-Aryan Migration into India, c. 1750 B.C. ......This map shows the general route taken by the Indo-Aryans who migrated into India beginning around 1750 B.C. They were nomadic warriors who came from the Plateau of Iran and moved through the Hindu Kush Mountains into the Indus Valley and beyond to the Ganges Valley. With them they brought bronze weapons, horses, and chariots."

"Odivissa: A name used in some Buddhist texts, including in those by Taranatha."...Thomas E. Donaldson (2001). Iconography of the Buddhist Sculpture of Orissa

"The term "Odisha" is derived from the ancient Sanskrit term Odra Desa or Odra Vishaya (lit. land of the Odra). In Pali, natives of this region were called Oddaka and in Sanskrit they were called Odra. 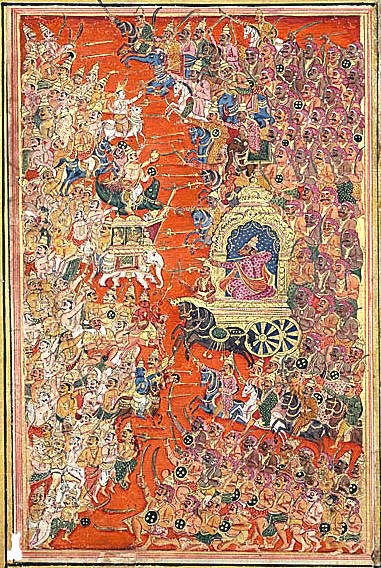 The Deva and Mahish-asura armies meet in battle.....Berkley Art Museum

"The Oriya, known classically by various names (Odia, Odri, Utkaliya, Kalingi, Latin: Uri), are an ethnic group of eastern India and of eastern Indo-Aryan stock. They constitute a majority in the eastern coastal state of Odisha, with minority populations in Andhra Pradesh, West Bengal, Karnataka, Jharkhand and Chhattisgarh…..The vast majority of the Oriyas are Hindus and are known for their history of Sun worship. Odisha is home to some of the oldest Sun temples in India, including Konark. There are small Christian and Muslim minorities......The term 'Oriya', while sometimes used to refer to any inhabitant of Odisha (that is, an Orissi or Odishan), more precisely refers to the ethnic group which natively speaks the Oriya language. Odisha marks the southeastern frontier of Aryan expansion and is therefore also home to a large tribal population of Dravidian and Munda origin. While many of them have adopted the Oriya language, they maintain a distinct identity and there is no discernible admixture between them and the Oriyas."….http://en.wikipedia.org/wiki/Oriya_people

"The word Oriya comes from ancient Sanksrit Odra. The Odrakas are mentioned as one of the people that fought in the Mahabharata, a testimony to their Aryan roots. Pali literature calls them Oddakas. Ptolemy and Pliny the Elder also refer to the Oretas who inhabit India's eastern coast…..

"….did the Aryans enter India in a single wave or did they enter through different waves of migration? Hoernle has suggested -that the Aryans entered India mainly in two waves. The first wave of migrating Aryans entered through the Kabul valley to Punjab. The second wave crossed the Gilgit, Chitral route and reached East Punjab and finally colonized the Ganga-Yamuna valley. The first wave of migrating Aryans belonged to Rig Vedic culture and the second group represented Brahmanical culture and they ultimately dominated the Brahmarshi Desa or Madhya Desa. Rapson has, however opposed the Hoernle theory. He has pointed out that the Indus Delta and the Gangetic plain are divided by a natural barrier. Hence the Aryans first migrated to the Indus valley and from that base they colonized the Ganga-Yamuna valley over long course of time after crossing the natural barrier. However archaeologists are inclined to suggest that the Aryans using gray-pottery entered Indian interior in two waves. In the middle of the second millennium B.C. the gray-pottery using Aryans belonging to copper bronze culture entered India. In the early centuries of one millennium B.C. the iron using gray-pottery Aryans entered India. In short they came in two waves."….http://www.importantindia.com/1066/migration-of-aryans/

"The evidences of the Later Vedic literature shows that in the Later Vedic period the Aryans migrated into the interior parts of India. The river Ganges is mentioned only once in the Rig Veda, but in the Later Vedic literature, the Ganges and the Yamuna are frequently mentioned. The Aryans became familiar with the river Sarayu in U.P. The mention of Kasi, Videha and Magadha indicate that they migrated as far as Bihar. The Satapatha Brahmana in the Yajur Veda mentions these places. It is estimated that the Aryans many years. It is estimated that the Aryan expansion in eastern India took place between 1000 B.C. and 800 B.C…."….http://www.importantindia.com/1066/migration-of-aryans/

"Odissi, also known as Orissi (Oriya: ଓଡ଼ିଶୀ oṛiśī), is one of the eight classical dance forms of India. It originates from the state of Odisha, in eastern India. It is the oldest surviving dance form of India on the basis of archaeological evidences….In the Tantric temples, such as the Hirapur Shrine, many of the yoginis especially are depicted in poses reminiscent of present day Odissi. "…..http://en.wikipedia.org/wiki/Odissi_dance 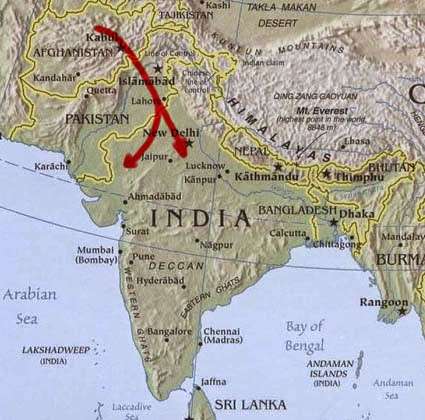 "Mentioned in the Mahabharata, Kalinga probably played host to more than one small kingdom. Two early capitals were at Dantapura and Rajapura, but its historical beginnings are very hazy. The royal line of Kalinga is said to have originated from King Vali, who may have been the king of Magadha, along with the originally non-Vedic lines of Anga, Pundra, Suhma, and Vanga…..Many small kingdoms existed in northern India while the powerful kingdom of Magadha dominated in north-eastern India during the first millennium BC, and occasionally extended its influence across the entire Ganges Plain towards the modern border with Pakistan. Like Magadha, the kingdom of Kalinga (roughly the Puri, Ganjam and Cuttack districts of modern Orissa in central south-eastern India and part of Andhra Pradesh), was founded by Indo-Europeans who migrated into India from around 1500 BC, but who were originally from Central Asia…..

"From about 2000 BC, the Indus Valley civilization began to decline. The history of these centuries is obscure, but this decline has been linked by modern scholars to environmental factors, such as change in climate patterns or an overuse of land and water resources; possible invasion by Indo-European tribes from central Asia may have been another factor. In any event, by about 1700 BC the large cities of the Indus valley had disappeared altogether. At about the same time, newcomers to India made their appearance, Indo-European speaking, semi-nomadic pastoralists from central Asia. They have brought with them the domestic horse and two-wheeled chariots, and have begun spreading out over the great plains of northern India. These “Aryans” are already starting to compose an oral poetry consisting of hymns, spells, rituals, dialogues and proverbs, which in later times will form the Vedas, the ancient foundation literature of Hindu civilization. These reflect a world under the rule of warrior aristocrats."….http://www.timemaps.com/history/south-asia-1500bc

"Indo-Aryan migration to and within Northern India is consequently presumed to have taken place in the Middle to Late Bronze Age, contemporary to the Late Harappan phase in India (c. 1700 to 1300 BC)….http://en.wikipedia.org/wiki/Migration_period_of_ancient_Burma

"According to the simplest and perhaps most popular scenario Tsilupa and Kalachakrapada the Elder were actually the same person, a so-called "madasiddha," or holy man, who hailed from Cuttack in what is now the state of Orissa. Tsilupa did apparently make a journey of some sort to the north of India, regardless of how events on his journey later became mythologized. The journey, however, takes on different connotations according to which version of the Legend which we accept. A strictly historical approach would maintain that Tsilupa actually traveled by conventional means to a country which then actually existed in the material realm, but to which legend has given the name of Shambhala, and there met with teachers or adepts who taught him the Kalachakra and presented him with actual texts which he then brought back to India."….http://www.shambhala.mn/Files/transmission.html

"Oddiyana: Oddiyana, mentioned in some Buddhist texts, according to some scholars may have referred to Orissa."….http://en.wikipedia.org/wiki/History_of_Odisha

"According to geneticist Luigi Luca Cavalli-Sforza in the book The History and Geography of Human Genes, the Dravidians were preceded in the subcontinent by Austroasiatic speakers, and were followed by Indo-European-speaking migrants sometime later….Some scholars like J. Bloch and M. Witzel believe that the Indo-Aryan moved into an already Dravidian speaking area after the oldest parts of the Rig Veda were already composed… native Dravidian speakers learning and adopting Indo-Aryan languages….

"The Indo-Aryan migration theory describes how the Indo-Aryan speaking people arrived in the Indian subcontinent, by proposing a migration from BMAC (present-day northern Afghanistan) into northern ancient India (modern day India and Pakistan). These migrations started approximately 1,800 BCE, after the invention of the war chariot, and also brought Indo-Aryan languages into the Levant and possibly Inner Asia. It was part of the diffusion of Indo-European languages from the proto-Indo-European homeland at the Pontic steppe, a large area of grasslands in far Eastern Europe, which started in the 5th to 4th millennia BCE, and the Indo-European migrations out of the Eurasian steppes, which started approximately 2,000 BCE......The theory posits that these Indo-Aryan speaking people may have been a genetically diverse group of people who were united by shared cultural norms and language, referred to as aryā, "noble." Diffusion of this culture and language took place by patron-client systems, which allowed for the absorption and acculturalisation of other groups into this culture, and explains the strong influence on other cultures with which it interacted.......The idea of an Indo-Aryan immigration was developed shortly after the discovery of the Indo-European language family in the late 18th century, when similarities between western and Indian languages had been noted. Given these similarities, a single source or origin was proposed, which was diffused by migrations from some original homeland. This linguistic argument is complemented with genetic, archaeological, literary, and cultural evidence, and research and discussions on it continue......The proto-Indo-Iranians, from which the Indo-Aryans developed, are identified with the Sintashta culture (2100–1800 BCE), and the Andronovo culture, which flourished ca. 1800–1400 BCE in the steppes around the Aral sea, present-day Kazakhstan, Uzbekistan and Turkmenistan. The proto-Indo-Iranians were influenced by the Bactria-Margiana Culture, south of the Andronovo culture, from which they borrowed their distinctive religious beliefs and practices. The Indo-Aryans split off around 1800-1600 BCE from the Iranians, whereafter the Indo-Aryans migrated into the Levant and north-western India."

"*** The debate about the origin of Indo-Aryan peoples is controversial, resulting in political agitation and inflamed sentiments. Some have rejected the theory of Indo-Aryan origins outside of India, maintaining that the Indo-Aryan people and languages originated in India."....Tobin Siebers. Religion and the Authority of the Past. University of Michigan Press. p. 52.